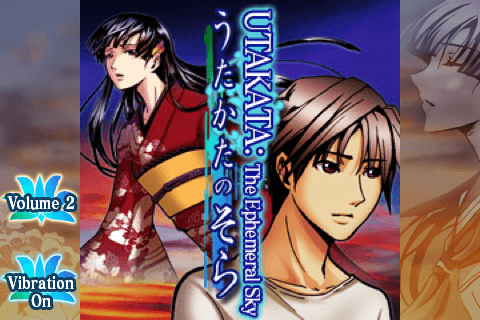 Story:
I truly must hinder myself from revealing the storyline for Utakata: The Ephemeral Sky, due to the fact that it is something which must be experienced for yourself.  In a small run down however, you play as Ayumi Nishina, a high school student who ends up traveling back to where he used to spend time as a child.

On the way however, a terrible accident occurs which throws Nishina into a whole new world of trouble, the alien world.  There are many things that people wish to keep secret, and the darkness of the past can be overwhelming.  Believe me when I say that these two phrases fit the storyline perfectly.

Utakata is quite a long game, but with it’s engaging storyline you will be hard pressed to put your iPhone/iTouch down.  This is perhaps one of the best games you can pick to receive a full visual novel treatment instead of reading simply out of a book.

Graphics:
Ukataka plays similar to any Japanese visual novel if you may have experienced those.  For those who haven’t the graphics are displayed through standing still backgrounds and the main character is rarely ever pictured.  However the characters that are talking will be displayed via a floating image of their upper body.  This is intentional though and the character’s expressions change to fit the proper mood of what they are saying.

There are also special scenes which are shown individually that expand upon either a flashback currently being talked about, or an important event at the time.  These scenes are beautifully rendered and expand upon our knowledge of the current characters due to a new perspective. 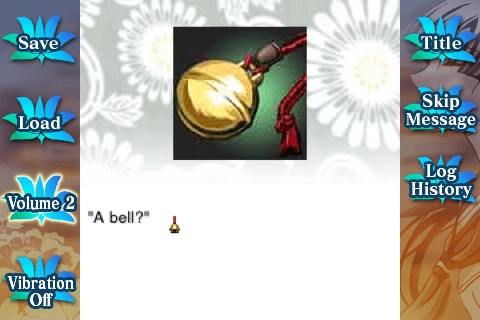 The backdrop for the story contains a variety of still imagery that stays the same throughout text unless the character travels to a different area.  The backdrops are designed well with some containing extreme detail.  Some are even a bit spooky when it comes to the puzzle areas.  Many of the puzzles have a spooky feel and the graphics portray this perfectly.

The puzzles are also well designed with little given away.  The first puzzles the player comes across will be simply pressing three things in the proper order.  However the environment that Althi has designed where the puzzles occur are very atmospheric and provide an eerie feeling as you advance through the alien world.

Sound:
Every word you see on the screen is just that, words.  Unfortunately this very long story does not have voice acting for any of its characters.  Not even specific phrases are said aloud for emphasis or character reaction to an event.

However the game does sport a nice sized album of background music that is available to listen to at any time if you so wish.  This is accessible from the Albums option on the main menu. They have information on the background music including who originally composed it.  There are no lyrics and some of them sound like elevator music.  Bear in mind that the music itself is designed to be unobtrusive to the story itself. 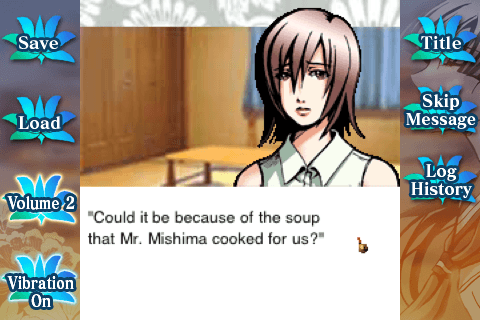 Gameplay:
As you play through the story of Ukataka: The Ephemeral Sky you will advance by reading the storyline text as it is presented to you.  There is no option to speed up the text display which is unfortunate for fast readers due to the original display speed being quite slow.

On the other hand, full text can be shown by tapping your finger on the screen.  Bear in mind that this will occasionally cause you to skip a certain bit of dialogue. But if this were to happen there is a Log of all the previously said text right next to the text window.

Navigating through the menu’s is occasionally a pain as well, due to the fact that you can not simply tap which selection you want, but instead must slide your finger up or down to reach your desired selection.  Then with a tap of your finger you are there, this is not a major cause for concern but does take getting used to.

The puzzles designed for Ukataka are very challenging, and have quite a large variety.  There are puzzles which involve finding a secret code earlier before, those who require a certain combination of things done, and even a sliding block puzzle to solve as well.  Each of these puzzles are navigated using your finger as the pointer guide, and then selected with a tap of said finger. 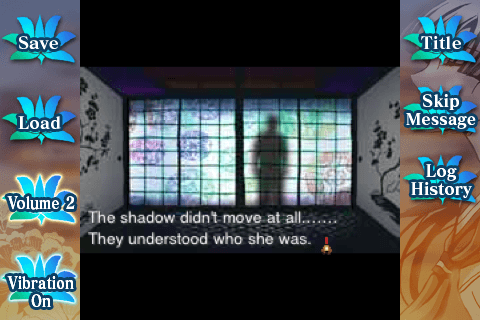 These puzzles only occur in the alien world which happens during specific parts of the story and tend to be quite freaky.  There are noticeably odd things which occur during these sections of the game and many of the puzzles are spooky in good way.

Considering the amount of text you will be witnessing, and the fact that the game was translated from Japanese to English leads to some unfortunate translation errors.  Many of them are barely noticeable, with only a small hint of mis-translation.  There are times however that you will not know exactly what was meant due to the fact that certain words have been used completely out of context from what their meaning truly is.  These are not game ending flaws by any means, but does cause for some mis-communication as certain phrases are lost in translation.

Overall:
Utakata: The Ephemeral Sky has one of the best stories you can find on your iPhone/iTouch and with the ability to always have it on hand, you will have this engaging storyline always with you.  There are small issues with the control system, and the translation is not perfect either.  Though these issues are barely detrimental when matched to the storyline.