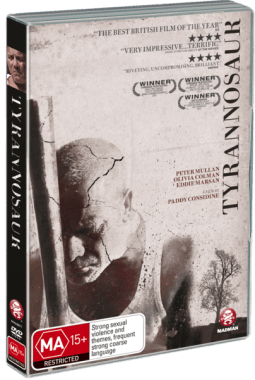 Back in 2007, a very special English short film by the name of Dog Altogether was released, written and directed entirely by Paddy Considine. It would receive critical acclaim and recognition when it picked up the esteemed BAFTA award for best short film, and would go on win several more awards at other film festivals in the same year.

With Dog Altogether being such a success, the short film would be expanded into a full-fledged movie, with a new name of Tyrannosaur. The movie essentially starts off  almost exactly the same way the short film did, but then proceeds to show viewers what happened after the events of Dog Altogether.

Tyrannosaur is one those movies that literally just comes out of nowhere and sweeps you away. Even with a modest budget and production values, this is a truly remarkable and unforgettable film that’s amazingly acted and produced. 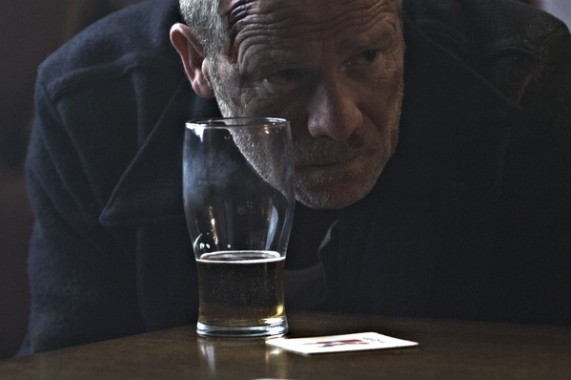 Tyrannosaur takes place in a rather poor and rundown town in North England, and revolves around the difficult trial filled life of Joseph (Peter Mullan), an unemployed widower who leads a very miserable and lonely life filled with drinking. Joseph has uncontrollable rage, and often finds himself in situations where he makes very vocal and physical displays of violence and anger, getting himself into unnecessary trouble and hurting others. At the same time, Joseph experiences a lot of guilt and remorse, and finds himself regretting his act of rage and violence just moments after committing it. He is a man who is in constant battle with his demons and feels overpowered by them, and his living conditions don’t make things any easier.

After one of his anger episodes at the local bar, which he immediately regrets, he has a chance encounter with a middle aged woman by the name of Hannah (Olivia Colman). The encounter seems destined as both Hannah and Joseph play a major role in each other’s lives, and while it creates a glimmer of hope and warmth for both, they must also face the hardships and consequences of their relationship.

What Tyrannosaur really does well is show just how people are never what we assume them to be, as there is just so much more beyond the surface. Joseph for example, while appears to be aggressive and dangerous, is actually a kind and caring person who genuinely looks out for the people he cares about. Hannah appears to be a mild natured and calm woman, but even she has her demons and issues. 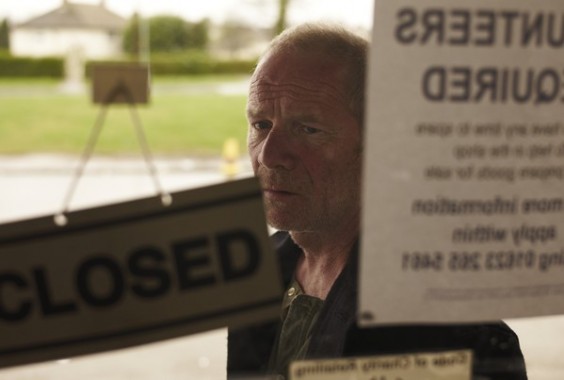 Tyrannosaur is a very gripping, intense, dark, and tragic movie, one that feels very down to earth and realistic, that too in a harsh way. There are moments in the movie that will just make your heart sink, and you will experience a deep sense of empathy and pity for the characters. At the same time, even when things look so awful and depressing, there are still moments of joy and hope for the characters, but in a very bittersweet fashion. Tyrannosaur is really an emotional rollercoaster, one that will pull a lot of emotional strings and leave a lasting impact on you.

What’s great about the movie is how amazingly well acted it is, the performances are superb as the character portrayal just feels so real and believable. The plot is filled with tragedy, moments of kindness, betrayal, and just pure irony. Tyrannosaur offers a truly powerful and moving experience. 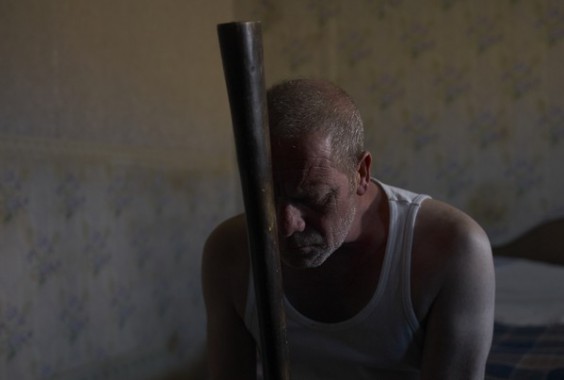 Tyrannosaur has a very dark and gritty demeanor to it, which really complements the general mood of the film very nicely. It presents a very bleak and depressing North England town where people live on low wages and only have their alcohol to keep them happy. The cinematography is brilliant, as it captures moments and presents them in a very gripping and emotional manner. The soundtrack of the movie, much like the rest of the movie, is subtle and brooding, and ties in nicely with the nature of the scenes and the emotions being portrayed. Although it has the one uplifting moment where there is a performance by a local musician, and the song’s lyrics really fit in well with the message that the movie is trying to portray. 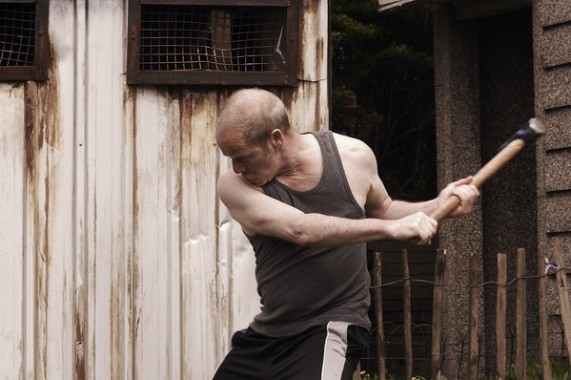 Apart from the trailers, this Tyrannosaur DVD release comes with the original short film that it is based upon, Dog Altogether, in its entirety. It’s a really well produced, subtle, and organic film that features some great use of camera angles. I would actually recommend watching Dog Altogether first before jumping on to the actual movie, as the short film really helps to set the mood and provides nice alternate view. The content of Dog Altogether is actually reproduced entirely in the opening minutes of Tyrannosaur, with some minor changes to the way scenes are acted out. It’s still good to start off with the film that inspired the actual movie to begin with, and it’s really cool to have it as an extra.

Dog Altogether essentially showcases Joseph’s issues with his near inhuman rage, and how he takes it out on people who didn’t really deserve it. The most tragic consequence is when he injures his dog out of drunken rage and regrets it immediately afterwards, with the rest of the short film focusing on how he attempts to seek redemption and pay for his actions. 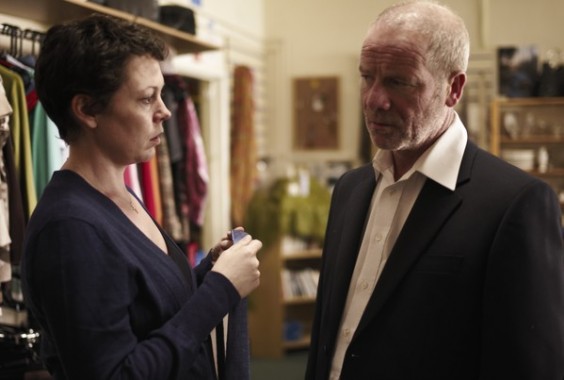 Tyrannosaur is a very dark and emotional ride which can be a little hard to stomach at times, and is not for the weak of heart. That said, it succeeds simply because it can make you feel so much sorrow and empathy for the characters, and when it’s all said and done it will leave you with a very heavy heart. However, it’s not a deliberate downer movie as what it really demonstrates is that no matter how bad things are, you just need to take life as it comes. Try your best to feel good about where you are at this point in time, and look forward to feeling better tomorrow.