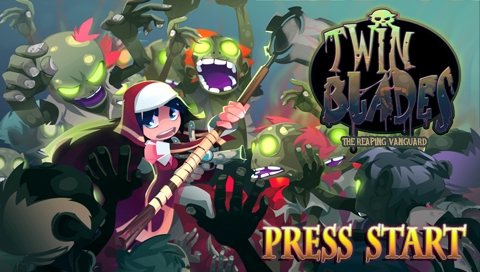 Twin Blades is a simple, fun game that will help you whittle away your small tidbits of free time.  Those who have played Odin Sphere or Grim Grimoire will find that the heroine in this game is very reminiscent of the characters from those games, being highly anime inspired and utilizing what appears to be flash animation for animations.  It’s a somewhat unique style that looks pretty appealing.

The premise of the game is simple, if a bit out there.  You are a nun charged with protecting the land from the zombie invasion.  You have a decently sized selection of weaponry to choose from, ranging from a scythe for melee attacks and a plethora of guns for ranged attacks such as a pistol, machine gun, rocket launcher, flamethrower etc..  The gameplay is simple, choose a level and move left to right while killing zombies.  Sometimes you will need to double back to kill any zombies that may have been still underground as you passed over.  What sets this game apart is it’s energy mechanic.  All ranged weapons require energy to be fired.  Hitting zombies with your scythe will replenish your energy, providing a nice balance between melee and ranged.  Every zombie you kill drops a heart, heart in this game is synonymous with experience or money.  You use these hearts to buy new weapons and upgrade them along with your existing abilities such as scythe damage and health. 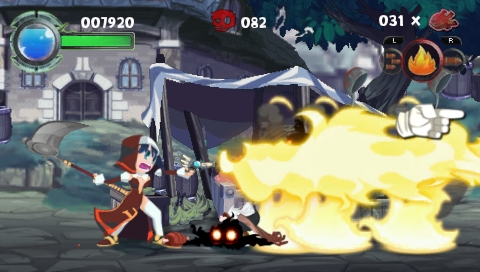 There are an adequate amount of things for you to spend your hearts on even accounting for the fact that this is a mini.  It will take hours to unlock and upgrade everything to max.  This is where the game loses a bit of it’s enjoyability.  Grinding, and lots of it.  There are only 9 levels (3 of those being bosses).  To account for this, the game makes you clear a set amount to unlock the next section.  Unlocking the next section will reset the previous levels and increase their difficulty, meaning you are going to be doing the first two levels MANY times before the game is over. 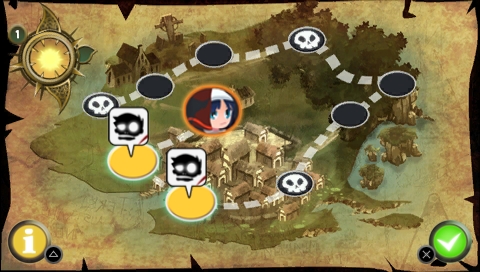 Bosses initially prove pretty tough.  Normally you just move left to right killing zombies before they get close enough to grab you, but bosses break that mechanic and act more like a boss from an arcade beat em up.  They have attacks that you’ll need to dodge (along with zombies that regularly pop up in an effort to provide you with energy).  As their health gets lower and lower their attack style changes and evolves and you will need to adjust.  Note that you can’t really take many hits before dying, two or three max.  Luckily, zombies have a small chance of dropping a health potion that restores around half your health so you are able scrape if you can manage to dodge the bosses attacks.

Aside from “story mode” there is also a survival mode that just pits you against wave after wave after wave.  The game keeps a scoreboard, both for story and survival, to see how long you can go without dying.  You keep your score between levels so for the true fanatics you will need to “beat the game” several times over for the ultra high scores.

Overall, for a mini, this game is pretty good.  Despite it being a mini (a medium clouded with shovelware) the game mechanics were thoughtfully developed and can provide some enjoyable moments though be warned, the zombies kill you pretty fast so make sure you don’t get careless.  While there are a decent amount of guns, they don’t actually count as guns but rather more like upgrades.  You only have one gun, your angelic pistol.  When you buy the flamethrower or machine gun power, it simply fires whatever it’s supposed to, but no visual change on the actual gun.  Upgrading the scythe proves to be initially problematic as well.  You would think an upgrade called “scythe damage” would just make you do more damage per hit, but instead it simply adds more attacks to your combo…thus making you spend more time standing in one spot while you perform that combo.  The combo is about the same speed of just spamming the regular attack, so it’s more or less a waste of an upgrade.