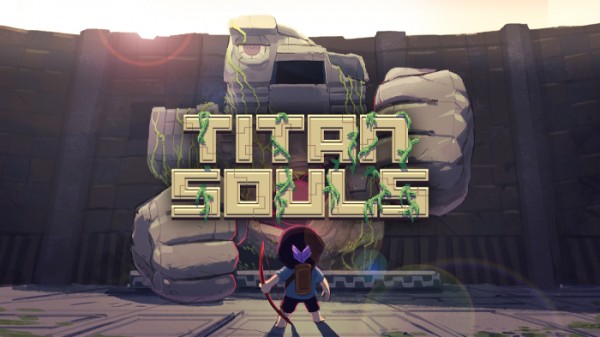 Overview
I grew up playing video games, but I rarely look back to the days of 8- and 16-bit games with rose-colored lenses. Many who remember gaming in the mid-’80s to late-’90s like to recall the days when games had a limited number of lives. Health that did not automatically regenerate or simply had one-hit deaths. The days of boss battles and throw-your-controller-at-the-wall difficulty. Games that never had opening tutorials or training modes. When one puts in countless hours to conquering that one extremely difficult area you have been dying in for weeks only to have some anthropomorphic mushroom thank you then tell you your princess is in another castle. 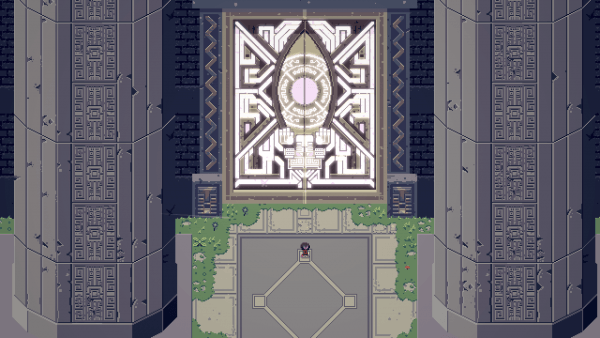 That said, I also remember the sense of accomplishment that came when defeating a difficult boss or beating that game you have been stuck on for weeks. Yes, the days when you did not simply complete or finish a game, but “beat” it; a term that makes it sound as if the game in question is on another team, fighting against you. Though, to be fair, many sure seemed to be back then. This brings us to Acid Nerve’s Titan Souls: a game with one-hit deaths, throw-your-controller-at-the-wall difficulty, and gameplay comprised entirely of boss battles.

Titan Souls does not have much in the realm of plot. All we know is that you play a young boy who must kill travel far distances to kill titans and capture their souls for some purpose unbeknownst to the player. Like many games from the 8- and 16-bit era, Titan Souls‘ focus remains primarily on gameplay.

You start off with a brief tutorial that simply tells you the button you need to press to roll and the one to shoot your arrow. This is as deep as the tutorial goes. Beyond that, Titan Souls just throws you inot the pool and expects you to swim or die. And you will die… a lot. 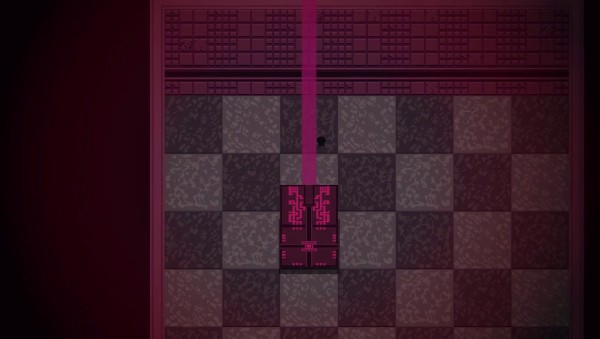 Reminiscent of Team Ico’s Shadow of the Colossus, Titan Souls‘ gameplay focuses entirely on boss battles. There are no Goombas for which to test your accuracy. What makes these boss battles worse is the fact that you have one weapon which has but one shot: an arrow. Upon shooting the arrow, you must then collect it to use it again; either by holding down the fire button to call your arrow back – you cannot move while you are doing this – or running over to your arrow to collect it. You must also hold down the fire button if you would like it your arrow to go longer distances. But wait, there’s more. Not only do you simply have one context-sensitive weapon, but if you are harmed even once, game over. You die and are sent back to the checkpoint in whichever area you are in and must go back to the dungeon, cave, what-have-you that inhabits the boss and begin the battle all over again. 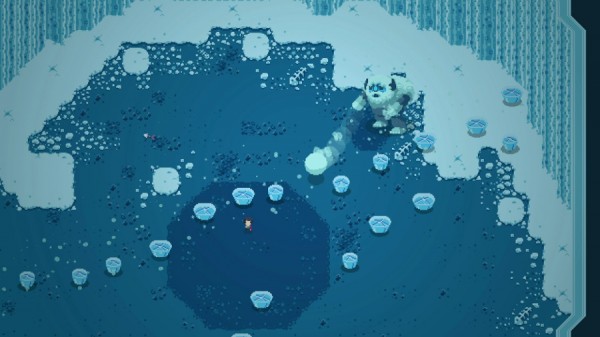 The good thing is that each boss has the same single hit-point that you do, but that does not make the battle any simpler. You must discover wear the titan’s weak spot is upon each battle. Finding said weak spot may be obvious right from the start or take you a few deaths to figure out. For example, I was stuck on the second titan I encountered for a collected three hours because I was trying to kill him the incorrect way. But discovering the location your titan’s Achilles’ heel does not mean that you will be able to take them down now. Oh no, this is just a first step. Each titan is quite large and has many, many ways to kill you. Upon figuring out the weak spot location, you know must figure out the titan’s pattern. All the titans have a pattern that they follow. They will charge at you in different ways, they will not all have your deficiency of merely having one weapon, and they all have pretty pinpoint accuracy. After all, these titans have seemingly been defending their souls from Link wannabes like you for millennia. They know how to kill the likes of you. Then, upon learning the pattern, you will be ready to take that titan down and devour his soul. 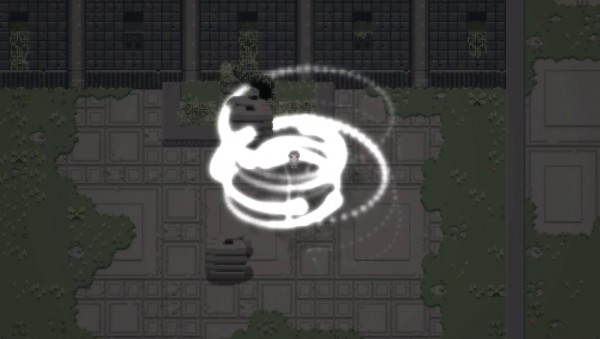 You see, taking down each titan comes down to three things: timing, accuracy, and loads of patience. I found a way to take down one titan within ten seconds, but only after 25 minutes of repeatedly getting killed while figuring out the best place for me to be when the titan darts in my direction and in which direction I should dodge when he does. There is no hand-holding in Titan Souls. You only have two moves, shoot and dodge. Do any of those incorrectly or at the wrong time and that titan kills you.

Now, I worry that this all sounds just torturous and in no way fun, but it really is a blast. If you come into Titan Souls with the belief that it is a Zelda game or an action-RPG brawler like a 2D Dark Souls, you will be disappointed. Titan Souls is an action-puzzler and each titan a new puzzle to solve. Each puzzle will take time and numerous mistakes. But – like the best puzzle games – once you solve it, you feel this wonderful, brilliant sense of accomplishment and glee that you kept trying and figured it out for yourself. And while Titan Souls is difficult, you never feel as if the game is working against you; this isn’t Ghost ‘n Goblins. Every time you die, it is very apparent that you erred and all you want to do is jump back in immediately to try bringing that titan down. If you aren’t too careful, you will end up losing hours, repeatedly saying to yourself, “Oh, I’ll get you this time…” 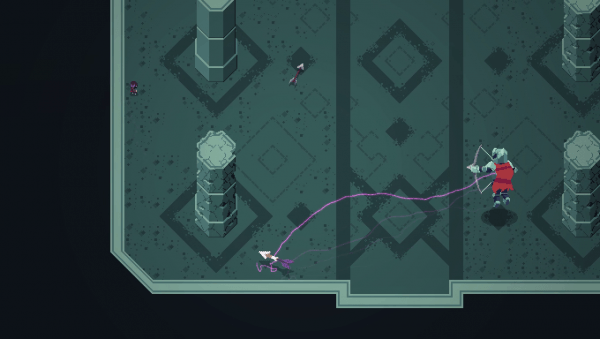 One of the first things you notice when entering the world of Titan Souls is just how gorgeous the game looks. Each area is so beautifully articulated and detailed that you will spend much of your time between titan battles just walking around and exploring the different areas on the map. The game’s visual palette of earth tones and lush greens in the forest and valley areas, dark reds and oranges in the fire area, and the bright blues and whites in the snow area do a spectacular job of causing the player to get lost in the beauty of it all. I cannot recall a game that put in such care and detail with a pixel art canvas since 2012’s Fez. 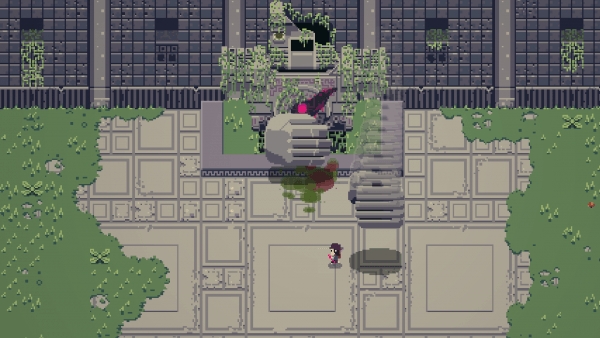 As for the audio, David Fenn captures the essence of each area and the intensity of every battle with his soundtrack. Titan Souls‘ art and music work incredibly well together and it makes me long to pick up the soundtrack for the game for the next time I want to do backpack a fantasy world in search of titan souls. Or, you know, to play in my car on the way grocery store. Whichever comes first.

Titan Souls is definitely not a game for everyone. It can be frustrating, challenging, and may make you feel just a bit like a masochist for constantly coming back to it. But, in the day when everyone is playing From Software’s Dark Souls series and Bloodborne, Titan Souls is a welcome addition to the so-difficult-I-could-smash-my-console-into-a-million-pieces-and-be-happy-about-it genre of interactive entertainment. Games like this are what make Devolver Digital one of my favorite game publishers around and I hope this is just the first of many games we experience from developer Acid Nerve.