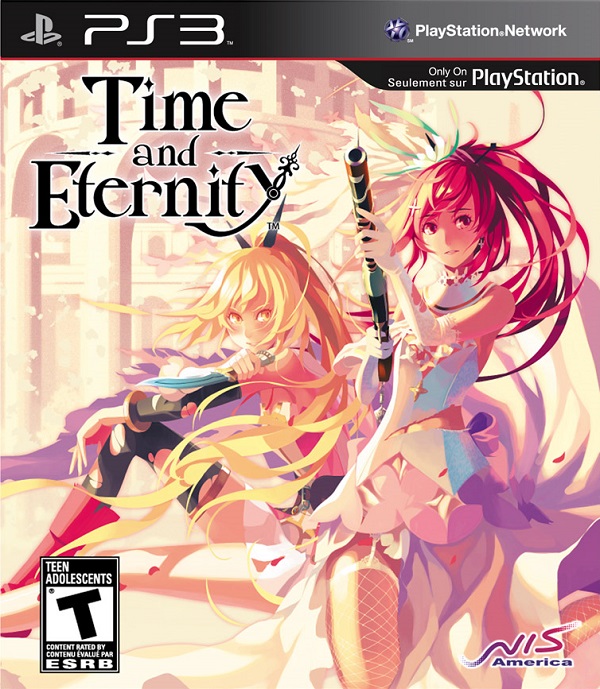 Overview
Whenever someone attempts to create something that has never been done before, the final product may be something revolutionary… but it could also be disastrous. Many innovative ideas have come from video games and now we have yet another title trying something new. Imageepoch’s Time and Eternity, which has been brought to the West by NIS America, looks to give JRPG fans a chance to play a game that looks exactly like an extended anime episode. The question is… does Time and Eternity bring us something great or has its attempt at innovation brought about Time and Eternity’s downfall?

Story
Everyone in the Kingdom of Kamza is ready to celebrate the royal wedding between their Princess Toki and the love of her life, Zack. As Toki’s friends gather to celebrate the day before the wedding, the entire group cannot wait for the two to tie the knot. Just as the couple says their “I Dos” and are about to be married, a group of assassins arrive to turn this joyous occasion into a red wedding. 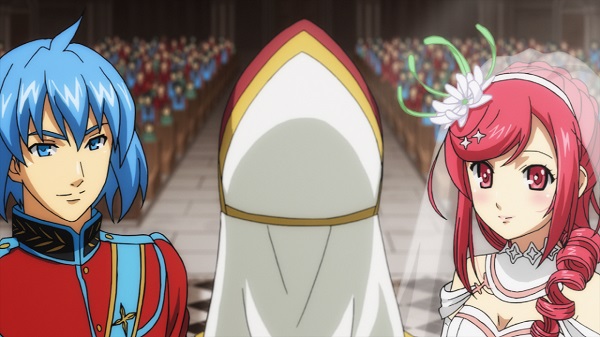 When these assassins leap to kill Toki, Zack jumps in front of her and saves her life at the cost of his own. Only then does Zack see that Toki has transformed into a blonde girl with a vicious attitude that is capable of taking out all of these assassins without breaking a sweat. Despite his death appearing meaningless, Toki isn’t about to let things end here as she reveals that she has the ability to travel through time.

As such, Toki uses this ability to travel back into the past, six months before the wedding and the death of Zack. Unfortunately for Zack though, he too has been transported back in time and has been placed inside of Toki’s pet dragon, Drake, only problem is, no one can understand what he is saying or even realizes the change has occurred. From here we learn about how Toki and Towa share the same body, swapping out with one another occasionally, though this fact has always been kept secret from Zack and was meant to be revealed to him after the wedding. 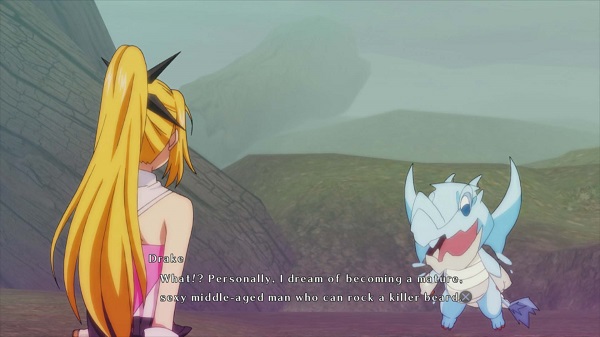 Time and Eternity then sets the player on a mission to track down the organization that is planning the attack that happened at Toki’s wedding and on the way they will learn more about the characters… though this may not have been a good thing. Zack, even as a human, came off as an unlikable male lead and this only ends up getting worse as the story continues along, with his only saving grace being his interactions with Toki and Towa.

While the fact that Toki and Towa each share the same body and have different personalities, what with Toki being a shy, sweet red-head and Towa being a rude blonde with a penchant for violence, makes for some interesting scenes throughout the game, the rest of the supporting cast is sadly too predictable and steeped in the most basic anime tropes that even someone who enjoys mindless “cute girls doing cute things” anime, such as myself, will find them unlikable as they act odd simply for the sake of being odd. 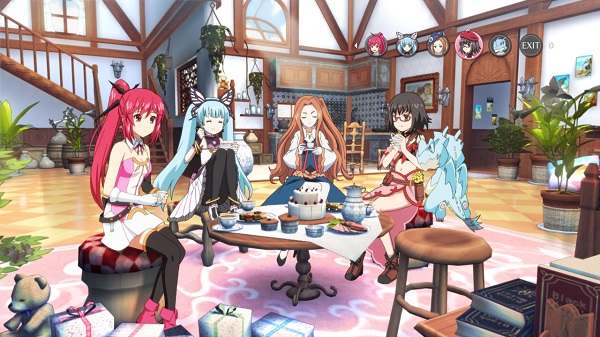 It is worth noting that while the main storyline is bland and features far too many roundabouts to extend the length of the game, the interaction differences and relationship building that can occur between Zack and either Toki or Towa depending on your decisions inside of combat and at Toki’s home are a highlight of the game since they not only explore the characters a bit more but also give the title a bit more replay value.

Gameplay
Most of the time that players spend outside of Toki’s home, where players can listen to the conversations of Toki/Towa and her friends, will be out on the field fighting against monsters. Now with Time and Eternity’s unique art style and set-up, combat is handled in a rather interesting way.  You see, rather than fight multiple enemies at once, Toki/Towa will always battle against one enemy at a time, though more enemies can be waiting to appear after the current enemy is defeated. 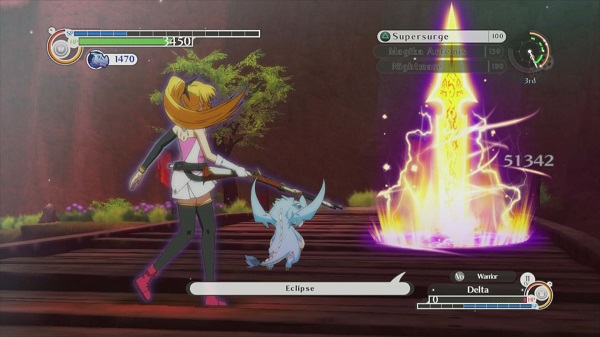 Rather than being a turn based affair, Time and Eternity can almost be called a rhythm battle game. You see, up close Toki/Towa can attack enemies with their blade while they can shoot them from afar or use special skills and magic abilities, some of which are unique to the active personality meaning that if Toki switches to Towa, some skills may not be available while new ones will replace them. Why I say this is a rhythm battle game is thanks to the ability to block and dodge enemy attacks.

Whenever an enemy attacks players can time their dodges by moving to the left or the right and nullifying all incoming damage, or simply block and receive minor damage. This means that these battles often become cases of taking potshots at enemies while dodging their blows. Being successful in battle requires some memorization of enemy attack patterns which offers a deeper experience than one would think given the limited nature of the combat sequences; however it is worth noting that because of the nature of these fights and the way that enemies are always fought one on one, these battles can last quite a while and require little strategy and after multiple fights, it quickly becomes tiresome and perhaps one of the most grinding games in memory. 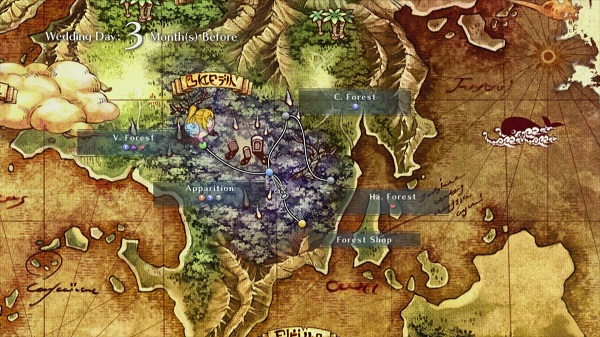 As far as actual gameplay goes, that is pretty much all Time and Eternity has to offer outside of the aforementioned time spent in Toki’s home where interactions with the main cast occur, since town navigation is simply selecting spots on the map and traveling to that spot for an event to occur and dungeon exploration is a mess thanks to Toki/Towa’s walking animation being so stilted and unwieldy. There is some mild customization in the form of “Gifts” that allow players to unlock special abilities for each personality, but this is very limited.

Visuals
One of the most lauded parts of Time and Eternity is the fact that the game will give players the feeling that they are actually playing an anime. While this sounds amazing in theory and it is gorgeous when everything is still, it all falls apart when things begin to move. In the field, Toki/Towa’s walking animation is alright looking as she navigates a 3D dungeon, however it quickly becomes apparent that it is absolutely terrible looking once you’ve seen the same dungeon, reskinnned for the third time, or ever attempt turning or walking backwards as the navigation and animation is some of the slowest, albeit pretty looking, I’ve ever seen. 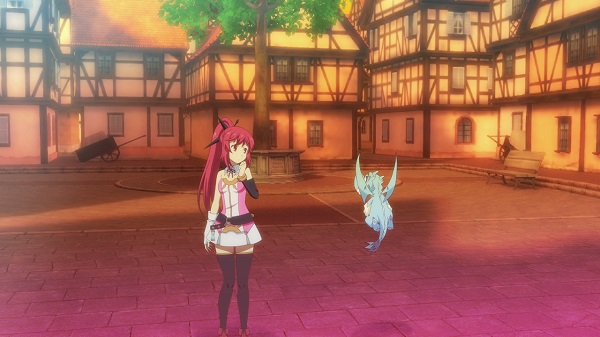 In the cutscenes the animations are great looking and in combat these anime style appearances all look wonderful, however again, repetition rears its ugly head when players progress through the game and see that the amount of enemies that have been given palette swaps is appalling. With all of the ambition that Time and Eternity has for its combat system and how great the actual combat animations look, the fact that the enemies quickly turn into basic reskins is terrible.

Outside of the combat sequences and dungeon exploration, the dialogue sequences are where Time and Eternity looks impressive at first, but falls apart as time goes on. First, the fact that the English dub is not matched to the mouthflaps of the characters is likely one of the first experiences players will have with these dialogue sequences. However I cannot lay the blame for that on NIS America’s feat, since all of the dialogue animation sequences, which show characters reacting and moving various ways, are all pre-canned sequences which repeat numerous times throughout the game and thanks to the lack of variation here, not only are they awkward to look at, but sometimes the dialogue will end a full five seconds before the animation’s mouth stops moving.

Audio
As mentioned above, the English dub not matching the flaps of the characters is not the fault of NIS America and in fact the company has provided some nice voicework with their dubbing of Time and Eternity. Toki’s and Towa’s voice actresses are close enough together that they fit the whole, alternate personality bit, nicely and the rest of the cast is nicely handled, though the Japanese dub is there for those who want that option. 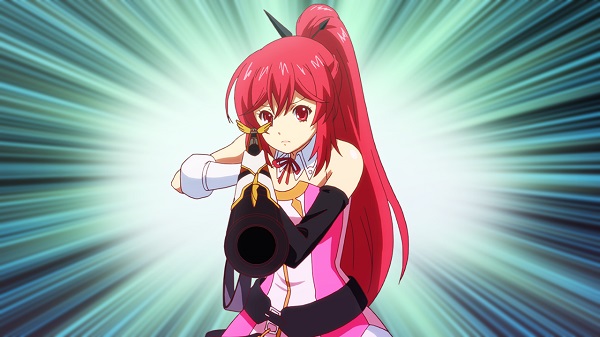 The soundtrack for the title is rather impressive with a number of battle themes that stand out and help make the grinding battles of Time and Eternity a bit more bearable, but only a bit. The rest of the soundtrack in the game is nicely done and works well with the scenes they are added to, especially whenever something emotional is happening.

Overall
Time and Eternity is a title that feels ambitious, looks wonderful, has an interesting combat system and offers us something new in a genre that some feel has grown stale. However that ambitious feeling is quickly squandered with a lackluster storyline which is only kept afloat thanks to Toki and Towa while the wonderful graphics for the title fall apart whenever the game actually starts moving. Time and Eternity is a title that I was overjoyed to hear was coming to the West, and while I am still pleased we have a chance to experience it, the experience is flawed to such a degree it is might be better to avoid it altogether.