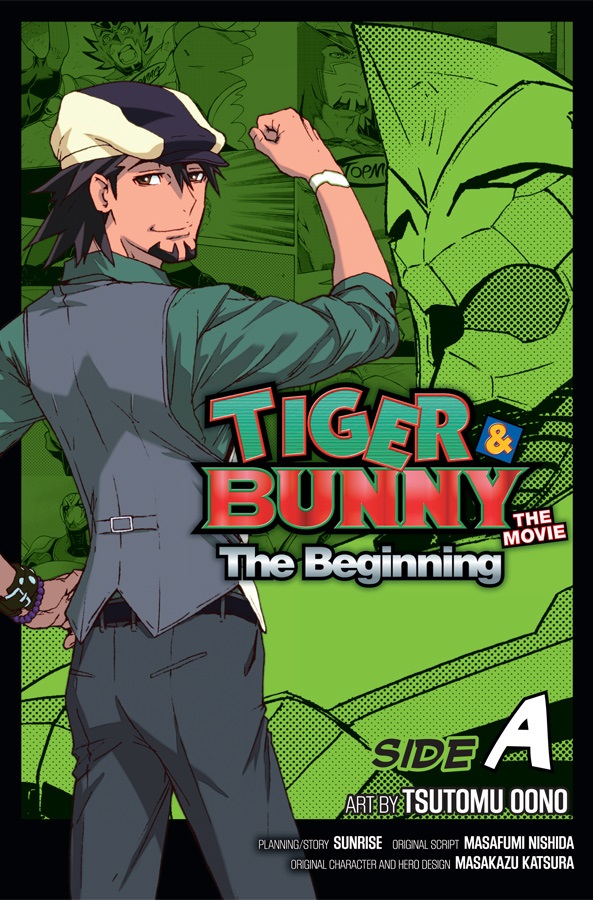 Overview
Despite being animated back in 2011 and being rather successful, Tiger & Bunny has not been given a second anime season. There is some hope however, as two movies were planned for release and now that the first movie, Tiger & Bunny: The Beginning has been released and is making its way overseas, Viz Media is also bringing the manga adaptation of the movie over to North America as well. Does Tiger & Bunny: The Beginning Side A kick everything off with a smooth start?

Story
In the world of Tiger & Bunny, there are people who have developed special superpowers called NEXT. The origins of these mutations are unknown but while some people live normal lives with these abilities, others have taken to a life of crime. To combat super powered criminals, super powered heroes are needed and Hero TV has created a program for that exact purpose.

Hero TV is a television series broadcast throughout Sternbild City, the setting of our story, where heroes are recorded as they take out criminals. Heroes gain points for saving civilians, capturing villains, arriving first to the scene of a crime and other accomplishments and every year the hero with the most points is crowned the “King of Heroes.” Since heroes are also sponsored by companies in an effort to advertise themselves to the public, this title is coveted by both heroes and companies alike.

Kotetsu Kaburagi, also known as the veteran hero Wild Tiger has been in the game for a long time and despite his power to increase his physical abilities hundredfold for five minutes, his sense of justice doesn’t mesh well with the producers of Hero TV and he spends most of his time languishing in the bottom of the rankings with almost no popularity.

When his close friend Ben tells him that Kotetsu’s sponsor has been sold to another company, Kotetsu is stuck forming Hero TV’s first ever hero duo with newcomer Barnaby Brooks, the man who shares the same powers as Tiger and recently embarrassed him. Side A follows these two from their first meeting to the end of the skating rink event, allowing readers to see how these two seem incapable of working together thanks to their goals being practically night and day.

Now, it is worth noting that Tiger & Bunny: The Beginning is pretty much a reproduction of the first few episodes of the Tiger & Bunny anime with a number of new events that take place. Almost all of these new events are focused in the second half of the movie, meaning that Side A is almost an exact replica of what readers have already found in Tiger & Bunny Volume 1.

Unlike Volume 1, more characters surrounding Kotetsu are introduced, including his family and his former employer.  Side A also touches upon Kotetsu’s wife and provides a brief appearance of the Ouroboros logo and Barnaby’s obsession with it. Unfortunately some minor details have been left out thanks to this, but for the most part everything remains very much the same, with a bit of action here and there as well as some comedy between Kotetsu, the other heroes and the beginning of his partnership with Barnaby.

Artwork
It is interesting to note that Tiger & Bunny: The Beginning’s manga volumes are handled by a different artist than the manga volumes. Tsutomu Oono handles the artwork this time around and while the art style is very similar, it is clear that more detail has been put into designing the character’s clothing and suits this time around. This makes a few notable moments, especially the occasional two page spread, very impressive looking.

Unfortunately the various logos and advertisements are still stripped from the characters, but there is a certain sense that the artist put more effort into trying to replicate the feeling of the movie and highlighting the Hero TV aspect as the scores earned while attempting to capture criminals are shown at the forefront and are less obscured.

As for Viz’s handling of the text, sound effects are all cleanly translated with no interference with the artwork and anytime that text is placed directly over a picture there is little obstruction to the artwork.

Extra Content
Unfortunately Side A is a bare-bones manga volume with no extra content included. This means that there are no character sketches, color pages or even notes from the artist or editors.

Overall
Tiger & Bunny: The Beginning Side A is an interesting start to this version of the introduction to the Tiger & Bunny series. That being said while it does introduce a few new characters and plot points early, the story of Part A follows the same exact path as we’ve seen before. While the artwork may be more detailed this time around, it does little to alleviate the repetition Side A has to offer.