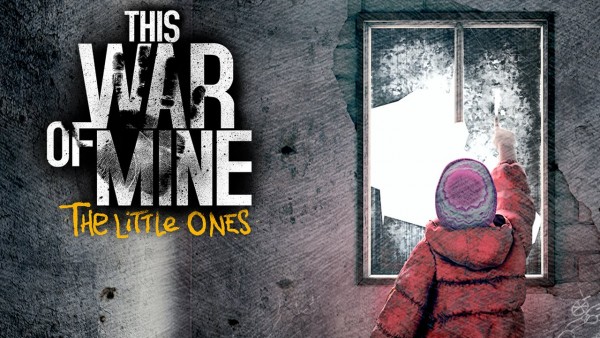 Overview
The majority of video games depict war as something that players must help put an end to by eliminating the opposition, whether it is with firearms or with magic and swords. Rarely do we see a game that explores what happens when you aren’t sitting on the front lines of a conflict and instead are seeing what the war is actually doing to the people living in the middle of the war. That is the concept that This War of Mine explored when it was originally released and now with This War of Mine: The Little Ones arriving on consoles with children being added into the mix, has this concept managed to transfer into an enjoyable game?

Story
This War of Mine: The Little Ones plays rather loosely with the concept of a storyline since rather than force players down any specific road, things are left up to them. You see, the first option players are given is to Survive… and they are then placed in the middle of the battle torn city of Pogoren with three survivors of roughly Eastern-European origin that are caught up in a battle between the Graznavia army and the rebels. 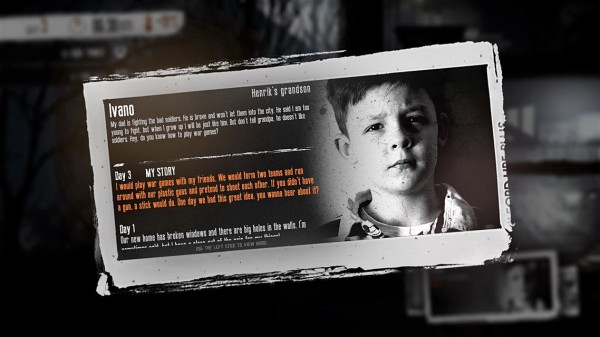 This first playthrough sees Pavle, an ex-soccer star, Bruno, a chef, and Katia, a journalist, taking shelter inside of a fairly large but damaged house with very little in the way of materials. With the only option being to survive, it is up to the player to decide what to do from then on. Survive through scavenging and building makeshift facilities to try and become self-sufficient, steal from those less fortunate than yourselves, or even murder those who have things you need.

All of those are options the player can take but This War of Mine: The Little Ones does an excellent job making these types of choices hit home. Survivors asking for assistance for their shot brother or need help with their collapsed shelter will remove a survivor from the household but the group will feel better for helping those in need. Feel like that feeble old aren’t nearly as desperate as you are? Then be prepared for some heartbreak as the old man begs you not to steal his ailing wife’s medicine and flee into the basement at the slightest hint of violence all while the sickly old woman cries for her husband. 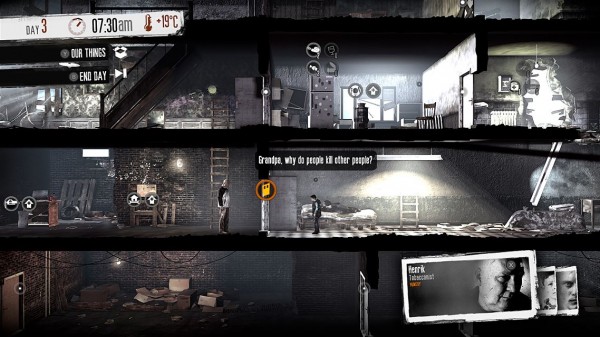 These types of decisions, which are presented as basic actions with no morality meter, really hit home and when you throw children into the mix it becomes something far different. Your survivors all have various bios that are updated as the days roll by, sometimes with pieces of their backstory explaining how they ended up alone and other times mourning the lack of necessities or decisions that have been made.

Children are also given a bio and their innocent outlook on the world is reflected here and this can make you feel like scum if you’ve done something terrible to scrounge up the food you’re preparing for your starving group. It may be survival of the fittest, but at what lengths will you go to in order to make it through?

Gameplay
This War of Mine: The Little Ones tasks players with simply surviving as long as possible in the hopes that the war will come to an end and that peace will return to the city before they all wind up dead. This sees the game divided into two separate sections, daytime and nighttime. During the day the player must control each survivor and have them either build up crafting stations and stations to recover vital resources while also feeding them and making sure that they aren’t falling ill or dying of injuries that they sustain during the other half of the game. 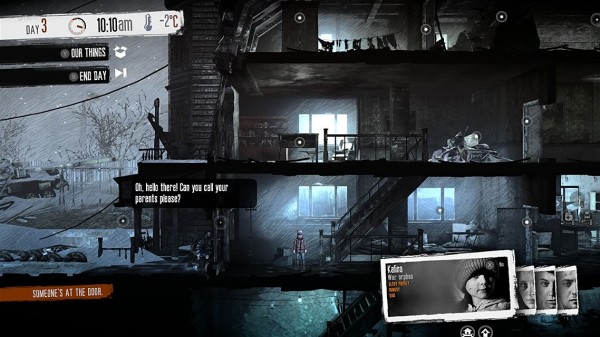 One of the biggest aspects of this title is the fact that, although players can scrounge around their shelter for some starter resources, that everything you need to survive can only be found in other locations throughout the city. With snipers targeting civilians during the day the only time scavengers can venture out is at night time and it is here that players will select from numerous locations in order to gather what they can. The hitch here is, each survivor can only hold so many items and while there are locations that are completely vacant, others can contain other NPCs that range from those looking for a trade, simple people living there, or hostiles that will readily shoot at an intruder.

This means that while foraging for supplies players will need to constantly determine what exactly they need to bring home, perhaps leaving behind a weapon to make space for much-needed medicine, all while stealthily avoiding those who mean them harm or will lash out if you are caught stealing from them. Of course once you do manage to make it home, hopefully your own base hasn’t been attacked by raiders, potentially stealing items and wounding anyone left behind. 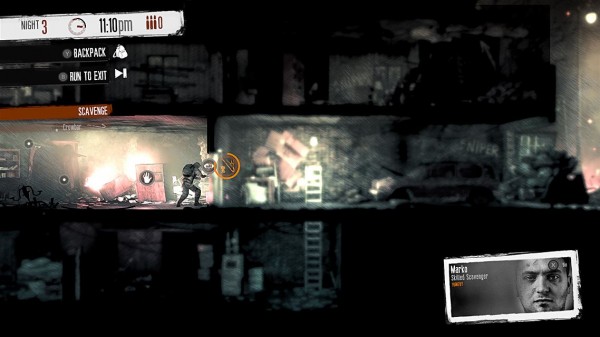 Adding children into the mix doesn’t really create too many extra dangers. Sure they are an extra mouth to feed and, until they are taught how to use certain crafting tables, traps, or the water system, cannot help around the house but their smaller stature does mean they require less food and by playing with the adults they can cheer up from the sadness that may be plaguing them due to their actions taken during the latest scavenging run. Plus, although a child can be wounded or fall ill, they face far simpler consequences compared to their adult counterparts who will even commit suicide if they become too depressed, as they are simply removed from the game.

With players constantly having to worry about gathering food, medicine to heal the sick, bandages to fix up wounds, water to cook/grow food, managing the temperature of the area when the harsh bite of winter comes, and the many building materials needed to craft things, there is quite a struggle here and it is incredibly possible that your first run through in the game will result in more than a few deaths and potentially a simple game over. 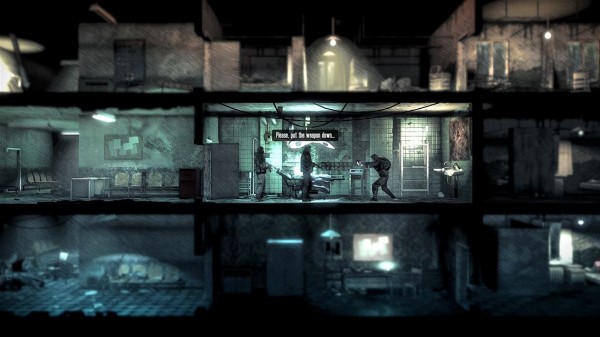 Unfortunately that type of lasting challenge begins to wane a bit the more experienced you become with the title as learning the mechanics and the layout of certain locations quickly turn the title in your favor, especially when the resource management becomes mundane tasks for a well-equipped group of survivors that may only face trouble if the winter this time around is especially hard. Playing as rough as possible and refusing to aid those in need does have an effect on your survivors however and this is reflected in the post-story epilogue. So while the world may be full of danger, showing a sliver of humanity to help out your fellow man or those coming to your door asking for a few scraps of food not only makes the group a bit more content but also encourages some faith in humanity. 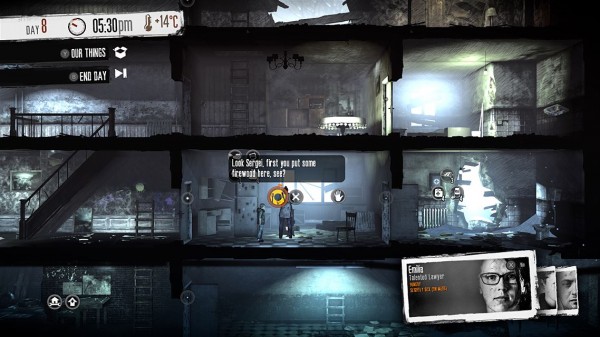 Those looking for less of a challenge can opt for the “Write Your Own Story” mode that allows players to select from a number of variables such as who exactly they start out with, what locations will be available, how nasty things have become in the city, when or if winter will come and how bad it will be, and even how long until the cease-fire is declared. This type of mechanic does give players a reprieve from the harshness of the randomized survival situation but also removes some of what makes the title enjoyable and that is surviving against the unexpected.

There is one more aspect that will occasionally challenge your survivors and that happens to be the game’s interface. Thanks to the title’s origins on the PC, most actions are handled with one simple button press while using the D-Pad to select from the extremely close options for any given object. This means that while you may simply want to rest in a bed, your survivor might start taking an axe to it instead because you selected the wrong action while in possession of an axe, which can turn furniture into lumber and fuel. 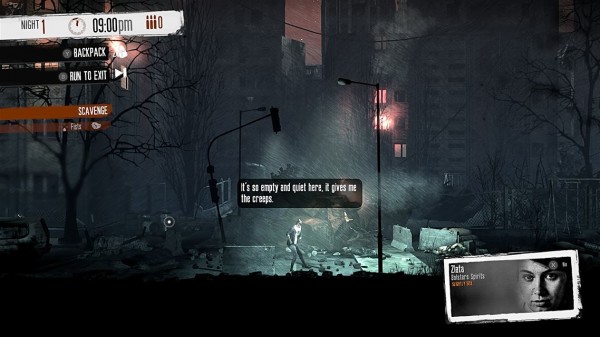 This same aspect becomes dangerous while exploring as well since rather than simply devoting a button to sneaking, the developers have opted to assign all movement speed to the analog stick. With fast movements creating sound ripples, players must be incredibly careful to only gently tilt the stick or risk drawing unwanted attention when your survivor decides to sprint for no reason. Either that or decides that they want to run up and down the same set of stairs multiple times in a row because the game keeps thinking you wish to do so rather than move to the left.

Visuals & Audio
The depressing nature of being caught in the middle of a conflict with nothing to do but survive is reflected in the art style and the world of This War of Mine: The Little Ones. Overwhelming use of gray, tinges of blue, and orange flame from bombed ruins give the locations players explore life while bodies of former inhabitants and notes left behind as graffiti tell the stories of what happened here. With slight alterations between the pencil looking art style given in the options menu, between “Sketchy” and “Soft” there is a unique feeling to this title’s presentation. 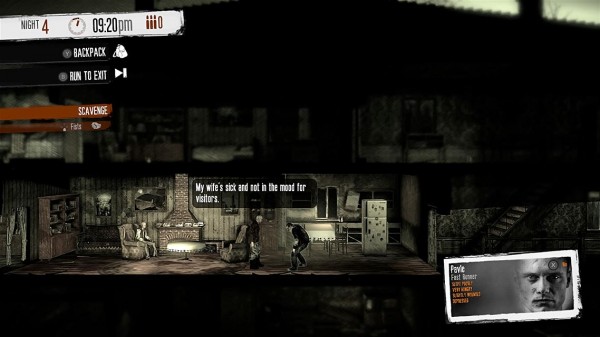 While This War of Mine: The Little Ones may lack any real voice work, outside of the giggles or sobs of a child and grunts of survivors, there is a real sense of tension thanks to the aforementioned art style and the way that background noises ranging from gunfire, artillery shelling, and crackling flames play against what would normally be a silent night.

Overall
Among the countless games that place players in the role of a soldier, This War of Mine: The Little Ones has succeeded in creating an emotionally draining and enjoyable survival simulation about those who are caught in the middle of conflict. With some rather dark options available to the player at times and leaving nearly everything on just how far the player will go in order to survive, this title is one that can generate some real empathy for your survivors and while it may lose some of its challenge after a while and has a few control issues, this is a title that you will likely remember.
Capsule Computers review guidelines can be found here.