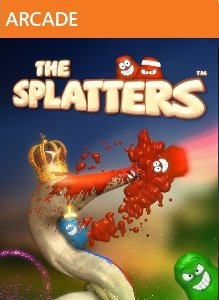 Overview:
The Splatters is a physics based action-puzzler that gives the player command of amorphous blobs called Splatters, whose sole goal in life is to explode in an amazing display for the amusement of an audience.  The more stunts and the more bombs set off, the more amazing the display.  The Splatters can fill the interests of casual and hardcore gamers alike with the exact same gameplay, the only difference being trying to achieve perfection.

Story:
The Splatters forgoes a story to focus on gameplay.  Splatters exist to explode and die for the spectacle, what more can you ask of them? 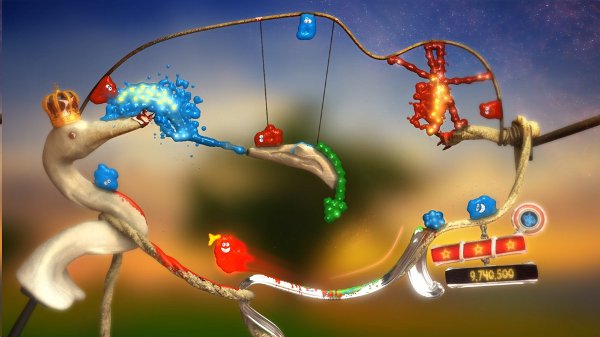 Visuals:
The visuals of The Splatters are very visceral.  As the rounds progress on each level, the remnants of Splatters remain wherever they hit, on the ceiling, floor, walls, and platforms.  This gives a lived in feeling to the levels, anytime past the first round, which helps to give a sense of progress.  As opposed to a clean slate between rounds that would leave the game feeling like a series of unrelated events on a given level.

Explosions are a big portion of the game, where every level’s goal is to blow up all the bombs.  So, it is great to see that there are plenty of different forms of explosions, in terms of shapes and color.  When playing, if one is able to abstract themselves enough when playing or watching someone else play, the events on-screen can play out as a visual symphony of movement and explosions that is really something to behold.

Audio:
The music for the game is very unique.  Feeling light and fun on the menus, but grandiose during gameplay to fit the mood and tone.  The music does a great job of conveying the perfect mood for the game, though has a synthy-pop feel that not everyone might enjoy.  It even does a good job letting the player know when they have failed through musical cues too, by slowing , reversing, then beginning anew.  Which, when failing to notice that something was missed, the music slowing is a better cue to just stop trying to control the Splatter than any visual indicator. 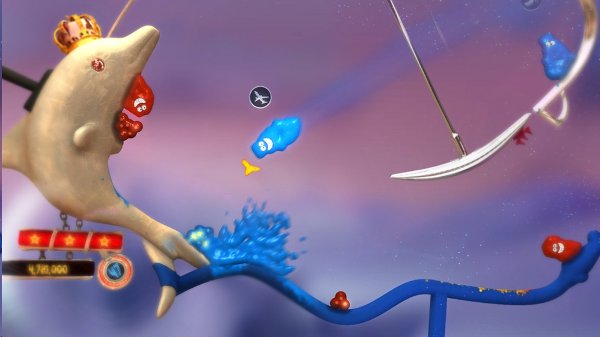 Just as the visual are fairly visceral, the sound effects certainly are as well.  Mainly liquid, the sound of Splatters hitting each other, walls, and bombs fits the gameplay perfectly.  Throwing a large Splatter into a wall to turn it into mass liquid is very gratifying, and while a single bomb going off isn’t overly thrilling, getting a cluster of a dozen or more is certainly enjoyable.

Gameplay:
The gameplay comes in three distinct flavors with the different modes:  “Become a Talent”, “Combo Nation”, and “Master Shots”.  “Become a Talent” is really more of a glorified tutorial, explaining the core basics and unlocking new stunts, which when you have finished the whole thing unlocks the other two.  “Combo Nation” focuses on more rounds and bombs to string it all together better for higher scores, where as “Master Shots” has few bombs and requires specific stunts to pass.

The general gameplay is very straight forward.  There are Splatters that can be controlled or switched between and bombs that must be set off using the liquid inside the Splatters’ globby bodies.  Controlling Splatters amounts to force and direction, with different stunts that can impact that force and direction mid-flight, so a Splatter can jump straight up in the air to then “air strike” in a different direction.  To finish a round all the bombs must be detonated, which can get very frustrating when multiple attempts end with only a few bombs remaining and the whole round restarts anew.  Every round being all or nothing can get taxing, to the point where it feels like there should be at least a little forgiveness. 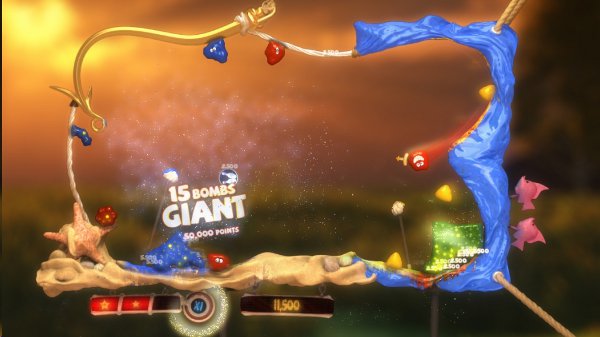 One of the issues though is that almost all of the stunts are controlled with the same button and control being passed to the next Splatter at the death of the current.  Until one gets really used to the game, this can lead to mashing that button and causing Splatters to smash into walls before you realize the first one is dead, along with half the others.

There are awards for each level, except those that unlock new stunts.  The awards are the stand 1-3 stars for performance, a bandanna for completion without failing, a trophy for one continuous chain, and an air strike  medal for utilizing that a lot.  The only real difference between modes is that “Master Shots” rewards stars for the more stunts used, while “Become a Talent” and “Combo Nation” do so by score.

Overall:
The Splatters is a pretty fun game.  It may start out feeling very difficult, but after getting through the learning curve, and not mashing the stunt button trying to win, it becomes a lot more manageable.  It also works very well as both a casual and hardcore game, as casual players shouldn’t have too big of a problem getting all through all of the levels or getting all the achievements, but a hardcore gamer can “enjoy” going through and getting all the awards for each level, definitely not a easy task. 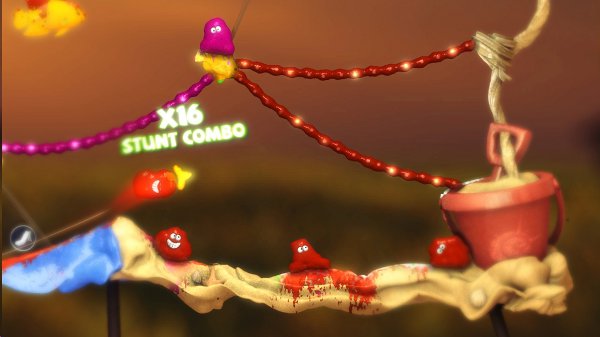 The leaderboards and “Splatter TV” also give the game a decent amount of replay-ability.  Trying to top your friends and actually be able to show off how it was done is a neat concept to put with this style of game.  “Splatter TV” also works as a built-in walkthrough for those stuck trying to get 3 stars on some of the different levels or just to be amazing with the ridiculous things people are able to pull off.

The game is very unique and mostly fun, with only issues being the sometimes frustrating difficulty and only one button being used for the different stunts, but there are plenty of levels to play through (which can be good and bad).  Anyone interested in physics and puzzle games, should definitely check this one out, unless you have high blood pressure.