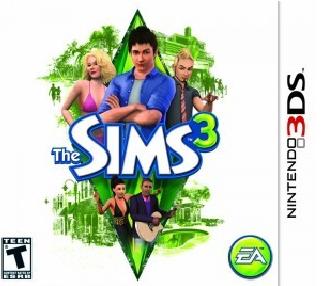 The basic premise of The Sims 3 is much the same as any other of The Sims games. You control the life of a simulated person, as he/she conducts their daily life. They learn along the way to love, dance, gain skills and knowledge and basically live their life as if they were a real person. The only difference is you can control their interactions, what they learn, how they spend their free time, what they wear and how they look. The Sims 3 for Nintendo 3DS takes all these principles of the Sims game that people have come to love, and includes a three-dimensional element to the game that really pushes the Sims world out of the screen. 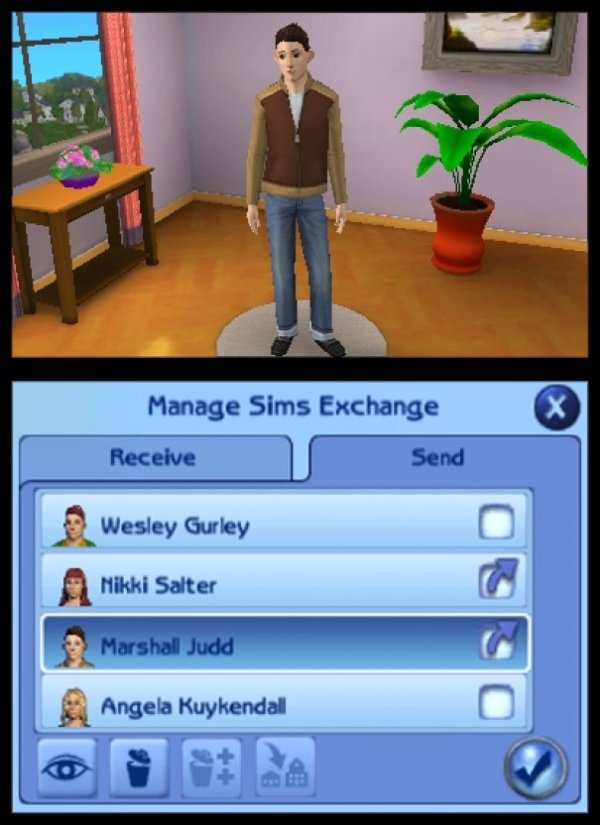 There are a few problems I have with the functionality of the 3DS in relation to the Sims. Firstly, I was originally navigating the map (bottom half of the screen) using the stylus. This is, at least in my opinion, the most difficult way to navigate the map of the Sim world. I won’t bore you with tales of my poor co-ordination, rather I’ll express my joy when I found out that the circle pad can also be used to pan across the bottom screen (and in saying this, I have managed to bore you with my ignorance!) the A,B, X, Y buttons can also be used to pan across the map. However, using the stylus to navigate through the world might be more beneficial for some, seeing as it is needed to engage with interactive items in the game, such as your Sim, furniture, and the moodlets and other navigational features. 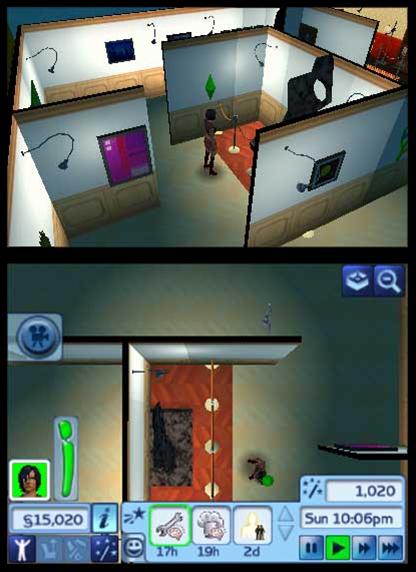 This is essentially the only problem I have come across, and I am certain it only exists from lack of playing the device. But now that that slight negative is out of the way, let’s get into the many positives that come out of the tiny Sim-world I so recently had in the palm of my hands! Rather than look at all the features of the Sims, I will look at the latest additions to the Sim title. The first feature I was amazed by came only seconds into the game, when I was asked to design my very own Sim. After all the basics, like name, body shape, gender and other things that seem necessary in creating a virtual person, there is the option to design the Sims facial features. There are two equally awesome options for designing faces. The first is a twist on more traditional modes of avatar design. You’re given the option to change the basic types of features, eyes, hair, nose shape, mouth type and so on until some sort of face is staring back at you. Sims 3 takes this further, allowing you do squish, bend, stretch and morph as much as you see fit! The second form of avatar design makes use of some of the 3DS’ technology using facial capture. You can either take a photo of yourself or of another person, making good use of the 3DS dual cameras, and the Sims will merge that face into the face of your soon-to-be Sim. The best part is the designing of Sims doesn’t end with the creation of your own Sim, you can also enter the “create a townie” mode through the start menu and populate the world of Sims with your own personal creations. 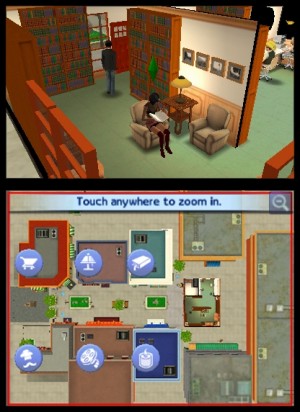 Another feature of the 3DS that has been used well in The Sims is the use of street pass. By using this, all your fantastic Sims, bursting at their simulated seams with personality, can be exchanged with other Sim players. Not only can your virtual simulated world be populated with your own creations, but so too can other peoples. This is a nice little metaphor for me personally, as I think it really brings the virtual act of wandering the streets in The Sims to a physical world, extending the weird little relationships Sims have with each other to fellow Sim players.

As I’m sure you can see from the screen shots, the Sims 3 has fantastic graphics, and there is a great attention to detail in the structure of the world. The double screen of the 3DS splits the graphics into two different modes of viewing the game. The top screen, which utilises the 3DS’ 3D technology, feels a little bit like a film. The actions of the Sim are played in 3D on the top screen. The angle of this screen can be altered using the camera icon in the bottom screen. The majority of the time I find myself watching the top screen, checking out my Sim has he plays on the computer or busks on the streets near the library. On the other side of the graphics, the bottom half of the screen, the interactive portion of the game, is designed to look like an interactive dollhouse. Looking down on the screen is like looking down through the roof or on to the street of a tiny little world. By using the stylus you can click on objects, people or whatever really to interact in a number of different ways. The graphics on this section aren’t advanced as the other graphics, but they do provide a really nice perspective into the world. None the less, there is still a fantastic attention to detail in characters, objects and buildings that really bring the world to life. 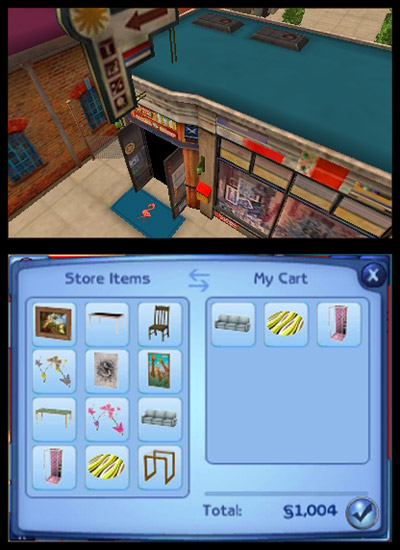 There is a complex layering of sound effects, music and dialogue going on through out The Sims 3. There are nice little sound effects that signify goals or tasks completed, when you click items there is a little pop noise and other little noises that are hidden in the game. Along with this is the music of the game. There is background music, and then there are a few objects that generate music. My Sim seems to love to dance for some reason, and is always turning the radio on to dance, and invites friends over to dance. Because of this the stereo is constantly on and no matter how many times I turn it off it just comes back on! There are also items such as the guitar that with gained skill can produce some pretty nice music. Then there are always the conversations of the Sims. They seem to speak some odd language that makes no sense, but I can generally tell what they are saying because of the images in speech bubbles. It is often annoying to hear my Sim ranting at random passer-byers, but at least he is a social little fellow.

If you are a fan of the Sims franchise, this game is definitely for you. If you are not, I’ll happily admit to being converted by this game, so I can only suggest that you can be too. Bringing the Sims to a 3D gaming experience isn’t the only new feature of the game. There is much more going on that is only capable on the 3DS platform, which I think really makes this game something special. If you’re not a big fan of the 3D movement in gaming, I’d still say the Sims 3 is worth playing, just later the 3D slider until you are happy, and enjoy the other features and addictive gameplay of The Sims 3.

Overall, I give The Sims 3 for the 3DS an