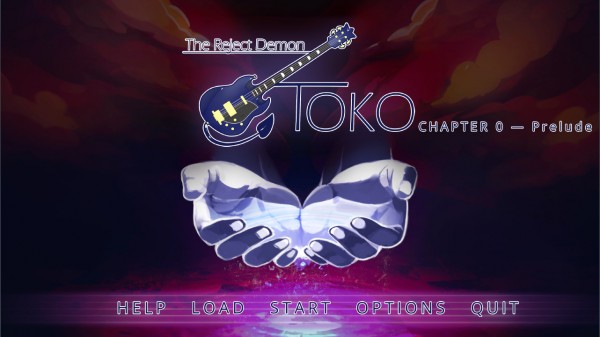 Story
In the world of The Reject Demon: Toko, demons are tasked with ferrying the souls of the dead to the afterlife. These souls are then taken to Limbo before they either are reborn or ascend but the demons of Hell do not perform this service out of any simple kindness. Born with partial souls, demons lack basic emotions and it is through this ferrying service that they obtain emotions, as they are able to sense of empathy or real emotion but once they ferry a soul to the afterlife, they are able to obtain the memories and emotions from the soul as sustenance. 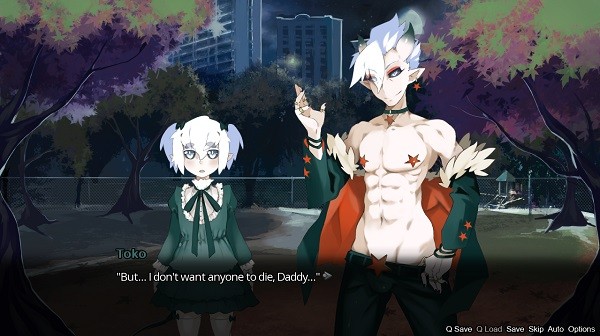 This means that every demon must learn to ferry souls early in life, taking their first soul when they are a child. Now while this may be the case for every demon that exists in Hell, this is not the case for a certain succubus demon named Toko. Despite her father escorting her at a young age to obtain the soul of a young girl about to be killed in a car accident, Toko saves the young human girl and simply brings back a piece of paper saying soul that the girl gave her in gratitude.

Many years later, Toko has failed to ferry a single human soul despite being given over four hundred opportunities to do so. Due to her disastrous record and inability to grow stronger, she is considered the worst demon in Hell and is subsequently expelled from Hell to live with the rest of humanity. This concept is unheard of as the longer demons spend on the human plane the more they start to become like a human before eventually losing all of their abilities and turning into a complete human. 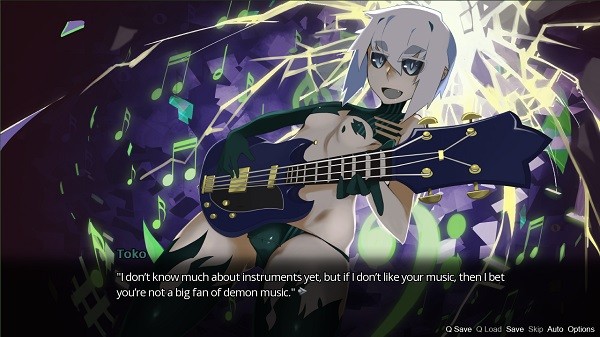 With her file shredded, Toko is thrust into the human world but quickly ends up on top of a girl named Nadia who is more than willing to help out Toko despite Toko’s lack of normal clothing and odd demeanor. Despite seemingly not knowing anything about one another, the two quickly bond as Nadia escorts Toko around town before eating out and taking her to see a movie. Once Nadia realizes that Toko has nowhere to go, she invites Toko to stay with her, though it isn’t long before demons from Toko’s past appear.

A lot of events take place over the course of this first chapter but that doesn’t mean that there isn’t time for humor as plenty of lewd jokes and double entendres are worked into the story alongside basic gags to help offset some of the more dramatic events and heavy focus on establishing the story. Now since The Reject Demon: Toko Chapter 0 – Prelude is a kinetic novel, meaning there are no choices to create branching paths and the entire story is told the same way every time, I will not go into much more detail about the storyline. I will say however that Prelude lays down quite a bit of groundwork that I am eager to see expanded upon in later chapters. 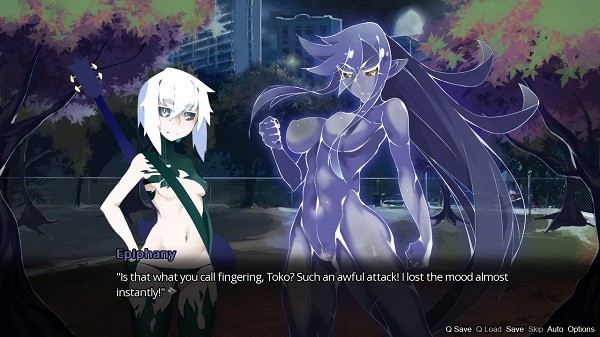 While the beginning may seem like a simple enough setting and the pairing of the rash but inexperienced Toko with the flirtatious and caring Nadia creates a story worth following as their relationship develops over the course of the chapter, The Reject Demon: Toko goes beyond that as there is much more to this story than it initially lets on. As other demons from Hell, a being from Russian folklore, and even angels step into the scene, an interesting storyline with a unique take on various pieces of mythology is formed, albeit quite loosely for now.

Very few of the introduced characters are developed at this point, however quite a bit of time was spent introducing the certain music based powers that demons can use, including one that sets Toko apart from other demons. There is plenty of room for development in the future and with things such as a Rock and Roll competition in Hell set to take place in the future and strange events regarding the angels hinted at, this prelude serves as a great starting point for the series.

Gameplay
Now as I mentioned earlier, The Reject Demon: Toko Chapter 0 – Prelude is a kinetic visual novel meaning that players will not find much to do here than simply click or press space to advance the dialogue. It is worth noting that Lupiesoft has mentioned that future chapters may feature various decisions, but for now that is not included here as the story is a one and done affair unless you wish to revisit some of your favorite moments. 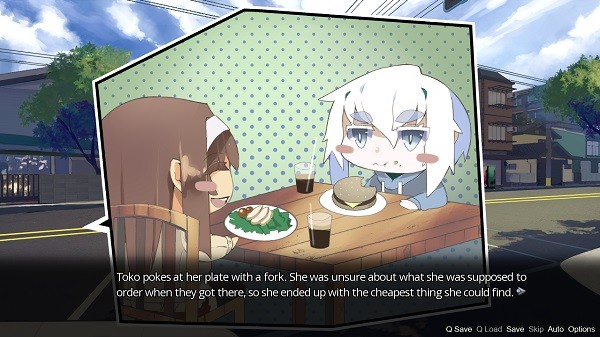 A strangely absent feature in this release is the lack of a CG gallery. There are quite a few CGs and pieces of chibi art throughout the story as well as a few scrolling images that would have been nice to see collected in one place for easy viewing like standard visual novels. In lieu of such a gallery players can simply make new saves during these moments but this is an unfortunate missing feature that is mirrored by the lack of an area to listen to the various pieces of background music. It is worth noting that the soundtrack is available as a separate purchase from the title for those who wish to own the music separately however.

Visuals & Audio
While it is clear that the character aesthetic in The Reject Demon: Toko is anime-inspired, the artist’s unique style helps set every character apart in a unique way. Every character introduced in the visual novel so far has a unique looking design with the main character Toko’s slim design and lewd demonic clothing serves as a good contrast to Nadia’s fluffy plump appearance. The character portraits aren’t very animated but do feature a number of different expressions, including a very cute blushing expression for Toko, as well as a few different forms as a devil’s clothing transforms when they begin to use their powers to keep things fresh. 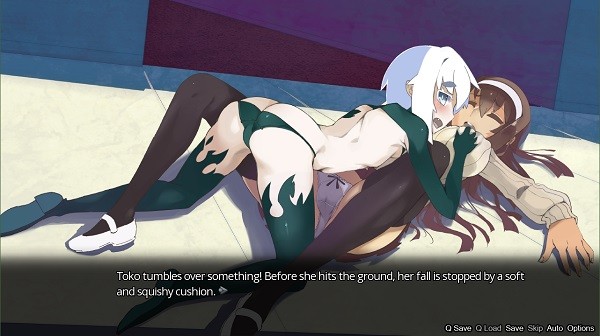 It is worth noting that there is a bit of fan-service sprinkled throughout the game but nothing that even comes close to an adult level, though there are plenty of pieces of dialogue hinting at adult topics. The background scenery throughout this first chapter is varied well enough as the characters travel to quite a number of different areas throughout the game. A decent amount of detail has been put into giving the scenery a fitting look depending on what realm the characters are actually in, though I did notice some issues with some pieces of the background art appearing far larger than they usually would, especially in regards to a certain stop sign. 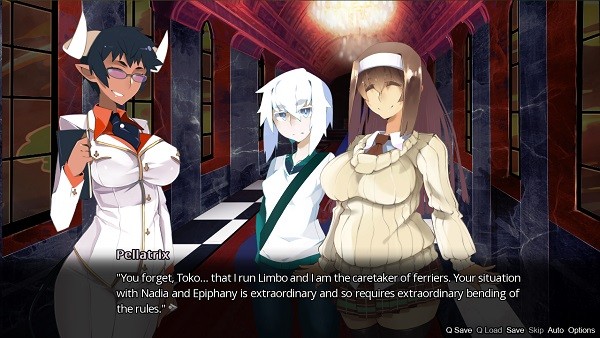 The background music in The Reject Demon: Toko Chapter 0 – Prelude really stands out from other visual novels by actually remaining quite memorable once the player is finished and featuring an almost entirely rock themed soundtrack. While there are calmer pieces of music for simple talking sequences the rock themes used during action-packed and dramatic moments really help set the mood for the events on screen, especially since musical instruments play a large role in a demon’s abilities. On the other hand, it is worth noting that there is no voice acting in The Reject Demon: Toko Chapter 0 – Prelude at this time though the developer has hinted at the possibility of voice work being implemented at a later date.

Overall
Despite being something of a minimalistic kinetic visual novel, The Reject Demon: Toko Chapter 0 – Prelude serves as a great starting point for what is currently planned to be a four episode series. By introducing us to a number of important characters, establishing the lore, and setting the stage for things to come, it is clear that there are many different ways that the story can go from here. The fact that this is all done while also getting players invested in the growing relationship between Toko and Nadia serves as a great way to keep player interest high as they wait to see what will happen next.