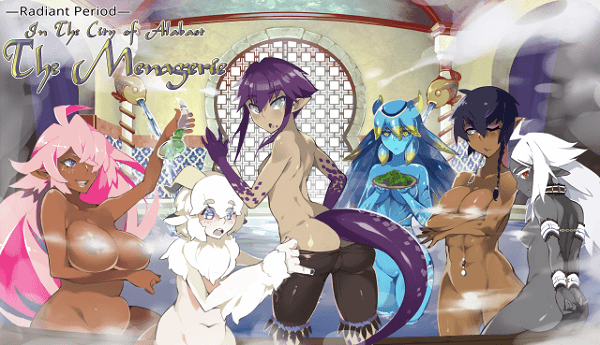 Overview
Many original English visual novels have been released lately, with some companies pumping out four or five basic stories to be released on Steam in under a year. However despite the rising popularity of these original visual novels, only a few of them have attempted to try their hand at creating an adult visual novel with sexual content. That is where The Menagerie comes in as it happens to be one of the few original English visual novels to contain sexual content as well as its developer, Lupiesoft’s, first attempt at one. Now was this attempt successful? Let’s find out.

Story
The city of Alabast has served as a glowing jewel in the desert as it has long served as a hub for both less fortunate citizens to gather in the “lower city” and those gifted with fortune and privilege who reside within the looming Sail that rises above the city. Although The Sail serves as a residence for those who are rich, below the sands resides a different type of secret where only those who are willing to pay the price will find unique treasures that are rarely found in the rest of the world. 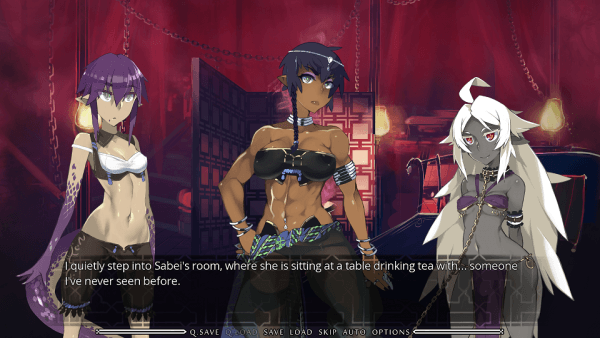 You see, below The Sail lies the menagerie, a luxurious underground area where many different races have found themselves contracted to serve a client’s every need. With many nobles willing to part with their coin in order to taste the exotic fruits contained within The Menagerie, the place has thrived for many years, with some of its residents knowing nothing of the outside world and only knowing life within the menagerie, more than happy to be cared for in service of others.

One such resident is Roa-Ji, a drachene that was hatched from her egg within the walls of The Menagerie and knows nothing else of the outside world. Despite her circumstances, Roa-Ji has rarely thought of why she is used for sexual work and has always found herself eager to please the one who raised her, Sabei, and any noble who comes knocking on her door. This changes however when a Sabei returns from her latest outing with not only a fresh faced dark elf named Aisha, but also encounters an interesting spice merchant, and even is tasked with training a rebellious girl named Key to learn the ways of the menagerie. 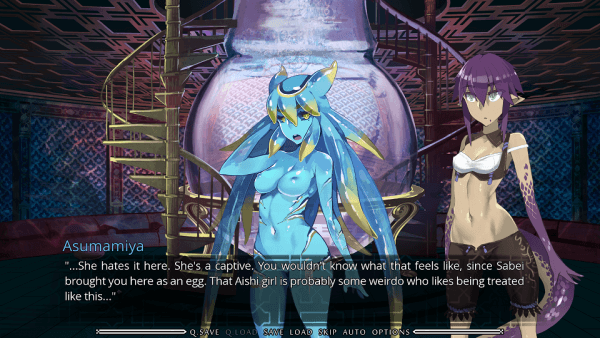 As one would expect, The Menagerie offers quite a large number of choices as players make their way through the story and it is through these choices that players will be forming Roa-Ji’s personality. Unlike your average erotic visual novel, The Menagerie features only a minimalistic common route as player choices will quickly find themselves setting themselves down one of the routes as they follow Roa-Ji down their chosen path. Be careful however, as the title has a rather bad habit of featuring a choice here or there that will instantly force players into an incredibly vague bad end that boots the player back to the menu screen.

In fact, this is a persisting issue with The Menagerie as a whole. By going through the various routes players will learn various tidbits about the rest of the servants that live within the brothel and in fact a number of their stories are extremely interesting. Various kinds of themes are explored depending on the route chosen, with ideas of friendship and love mean to those who find themselves in the menagerie and what home means to these girls. 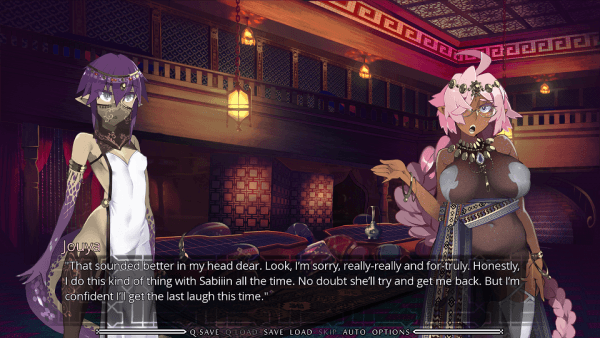 Groundwork is established for players to learn far more about not only Roa-Ji’s origins as well as some of the backstory about the girls but it never really manages to deliver on anything that is built up as most of it is cut short simply by awkwardly ending a scene as abruptly as possible. There may be times of conflict that see a few characters growing angry, but more often than not this usually features a choice that will then shut down a certain side and predominantly lock players down with a certain subset of characters and barely interact with any of the rest of the characters found in the game.

To make matters worse, there are numerous hints to certain aspects regarding Roa-Ji and the world, even going so far as to describe certain areas in the world, that never play out or are suddenly ended as the story skips far too often with even the endings feeling rushed as no hints are given at all throughout the title that certain events are taking place above the menagerie, making the rushed endings lose some of their luster. These routes do provide some emotional connection with those you chose to follow, depending on your ending of course since only the true endings for these routes will offer any sense of proper completion but even then they feel barebones in nature with only one serving as a satisfying ending for Roa-Ji, even if it does lack most of the information that she would receive through other routes that feel more open ended.

Gameplay
As one would expect, The Menagerie plays like your average visual novel here but it is worth noting off the bat that there are no scene replays. This means that if you wish to save a certain sexual encounter then you will need to take advantage of the game’s generous save slots. The same can be said in regard to the choices made since, as mentioned earlier, some selections can abruptly force players to the main menu with a vague conclusion. 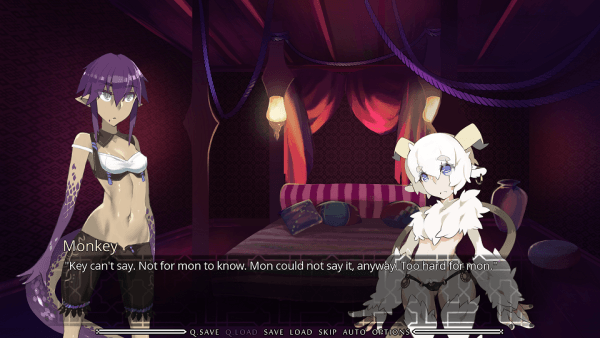 It is also worth noting that while The Menagerie does sport a gallery where players can view previously seen CGs, there is no way to actually tell if you have unlocked all of a character’s specific sequences since simply selecting a character portrait (of which two are locked as apparent placeholders) will show you all CGs containing that character, even if this means repeats between portraits, in a format where players will need to click to move on, not actually seeing a list of shown images that may still need to be tracked down.

As for the actual sexual content, it feels a bit strange to write this but most of the scenes felt particularly uninspired. Despite the fact that Roa-Ji is a futanari (called fiore in the game) various aspects regarding her anatomy are barely explored with only certain scenes briefly mentioning her tail and other aspects coming into play since most sequences simply involve vanilla sex between Roa-Ji and another girl (with a few girls only having one or two brief scenes), a bit of yuri action, and the occasional threesome. There are of course a few snippets of tentacle play and a sequence that is briefly forced on Roa-Ji as well as a number of S&M sequences which do explore a bit of rough bondage but nothing overly extreme as Roa-Ji never is pushed beyond what she feels comfortable with during these sequences. 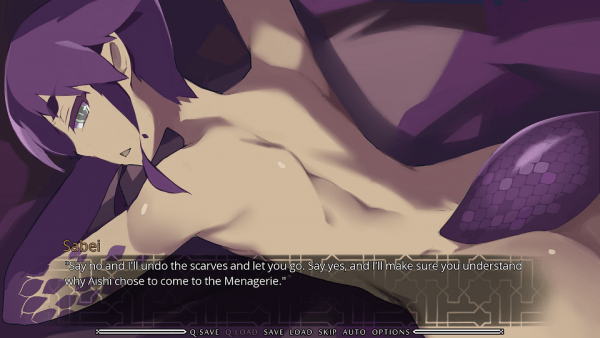 There are also numerous implied sexual events that take place that either aren’t given CG sequences in any form or are displayed with only the original CG with no changes between positions which makes some of the sex scenes appear far shorter than they actually are, as the writing does still manage to deliver some quality content, especially for those who are looking into something with a bit of S&M play as the game does explore the feelings of both the dominatrix as well as her “pets” and how those who submit themselves have the real hold over the relationship.

Visuals & Audio
The designs present in The Menagerie are rather pleasing to the eye and feature their own standout artistic style. It certainly helps that the characters are unique in nature, with many being a bit more monster themed, such as an aquatic girl requiring constant hydration, a dark elf with her own little secret, a handful of other elves with unique features (including one who always is sprinkled with gold flecks), and of course Roa-Ji who sports a subtle chest but a rather monstrous “lizard” in her pants. The basic character portraits have a decent amount of variety here and seeing a character blush is always a nice touch considering the different flesh tones at play here and this same level of detail transfers well into the sex CGs that are entirely uncensored thanks to the title being developed outside of Japan. 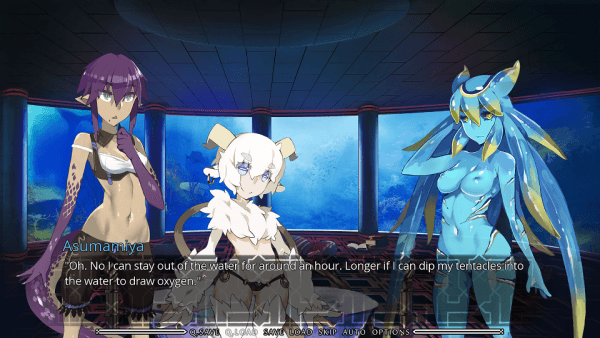 Though as mentioned before there appear to be far too few CGs for the amount of content that is actually written. The quality of said writing is rather enjoyable, but a bit rough around the edges as there are a number of misspellings scattered through the dialogue and a couple of times the text didn’t quite match the content being shown. It is also worth noting that a handful of times, regardless of whether viewed in windowed or full screen, text would overflow out the bottom of the dialogue box during one of the routes, and while still legible, it is a rather odd thing to see.

It is interesting to note that although The Menagerie does support on option for voice volume, this title does not currently contain any voice work at the current moment. That being said what it does feature is some great sounding background music that fits the desert harem setting of the series perfectly, with a number of exotic tracks providing a unique feeling to the title set in a fantasy realm such as this.

Overall
The feeling I had after completing The Menagerie is that Lupiesoft may have wanted to do far more with The Menagerie than they eventually had to put out as this title shows a lot of promise despite its flaws. The various characters are extremely interesting and I would have loved to learn more about certain aspects that are only briefly touched upon, especially regarding Asumamiya, and while this is of course an erotic visual novel that does contain a number of enjoyable sex scenes that scratch a certain itch that few other titles touch, it feels like building more of a relationship with these girls and exploring the highly interesting world that the writers managed to craft around Alabast would have made the title far better as it simply feels like it could have been much more than what was delivered.
Capsule Computers review guidelines can be found here.