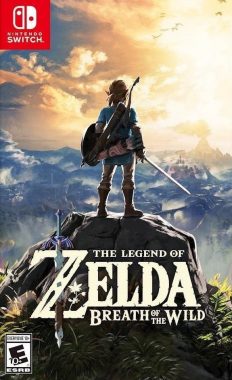 The Legend of Zelda: Breath of the Wild

Nintendo have been preparing us for Breath of the Wild for years now, slowly showing more and more of its offerings as time went forward. Last year, we found out that it would not only be coming to the Switch (as well as the Wii U), but also would be a launch title to ensure the new platform’s success. The Legend of Zelda franchise needs no introduction by any means, and for the most part – needs no critique on performance. This is a new destination for Link, however. With an open world, new enemies, bosses, and friendly faces alike, how does Breath of the Wild stand? Let’s find out.

I won’t go too far into detail speaking about the plot, as for one it is quite deep and just one, small whisper of a specific event could slightly spoil what may be an incredible moment for some. Players start out nearly nude, only to find out that Link was asleep for one hundred years, failing to defeat Calamity Ganon. Princess Zelda is being held in Hyrule Castle – which she has sealed off after saving our hero from certain destruction. After doing a bit of chatting after waking with an old man who turns out to be the key player for the narrative, Link sets off on a journey to restore order to the land. 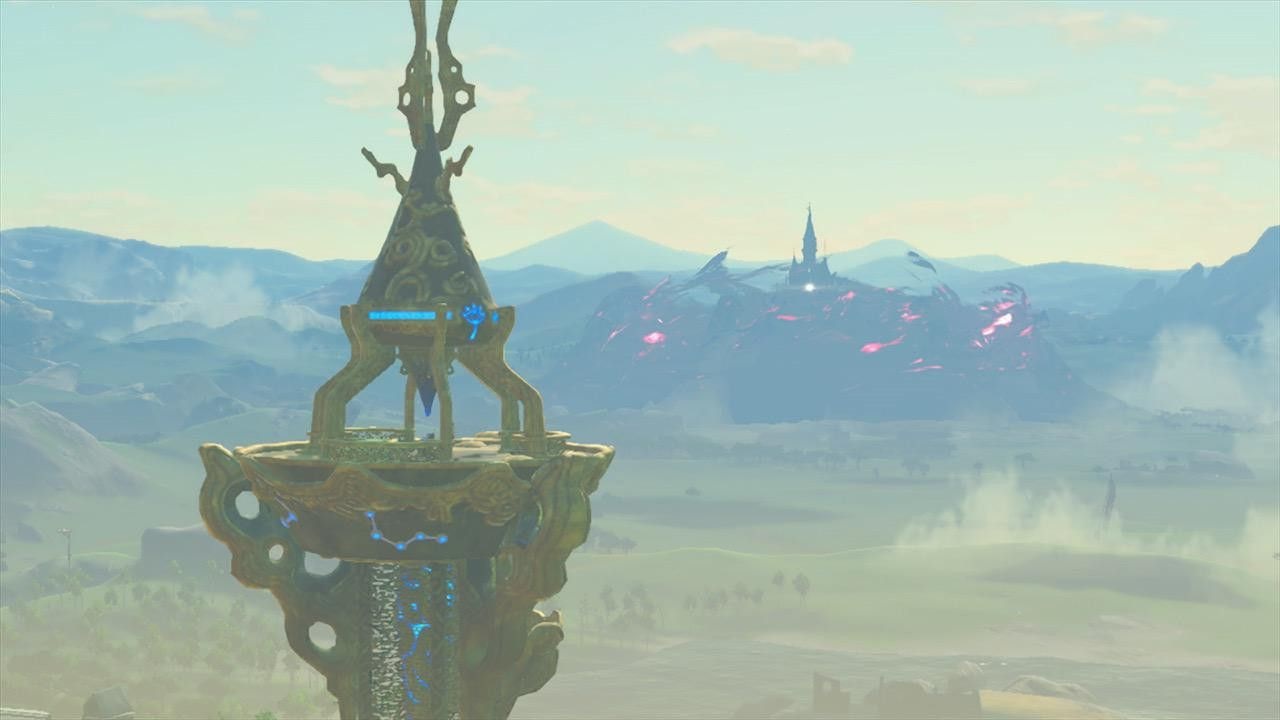 This story is told unlike other entries in The Legend of Zelda series, as it is like a book that has had all of its pages ripped out, and now requires the player to set off to find them. Sure, there are a lot of cutscenes you will come across if you follow the dotted lines that equal progression, but I found that most of this tale is not pre-rendered and requires the player to actually dive into the main gameplay experience in order to put the pages back together. Being an open world epic, this is not the first time we have seen this done before, but Breath of the Wild does it with grace and finesse, ensuring there is always another interesting chapter full of emotion, laughs, and intrigue around every corner.

After doing a few small quests for our old friend, we then set off into the largest world that has ever been introduced in a Nintendo game. Yes, that is really what gives this game its kick, as the world itself is meant to be explored, and there are a ton of wonderful aspects of the journey that intertwine with each other – leading to the player getting their entertainment mainly from discovery. There are so many little touches and details that make Hyrule worth picking over again and again, such as the environments themselves, which can be a bigger threat than the many types of enemies in the game. Lightning storms mean you must un-equip anything that conducts electricity. Specific areas require specific armor or abilities in order to be explored, dabbling in some hot and cold elemental properties in order to take advantage of our fragile, yet brave hero. Yes, Link is not a pushover, but no game has ever made him feel more human. 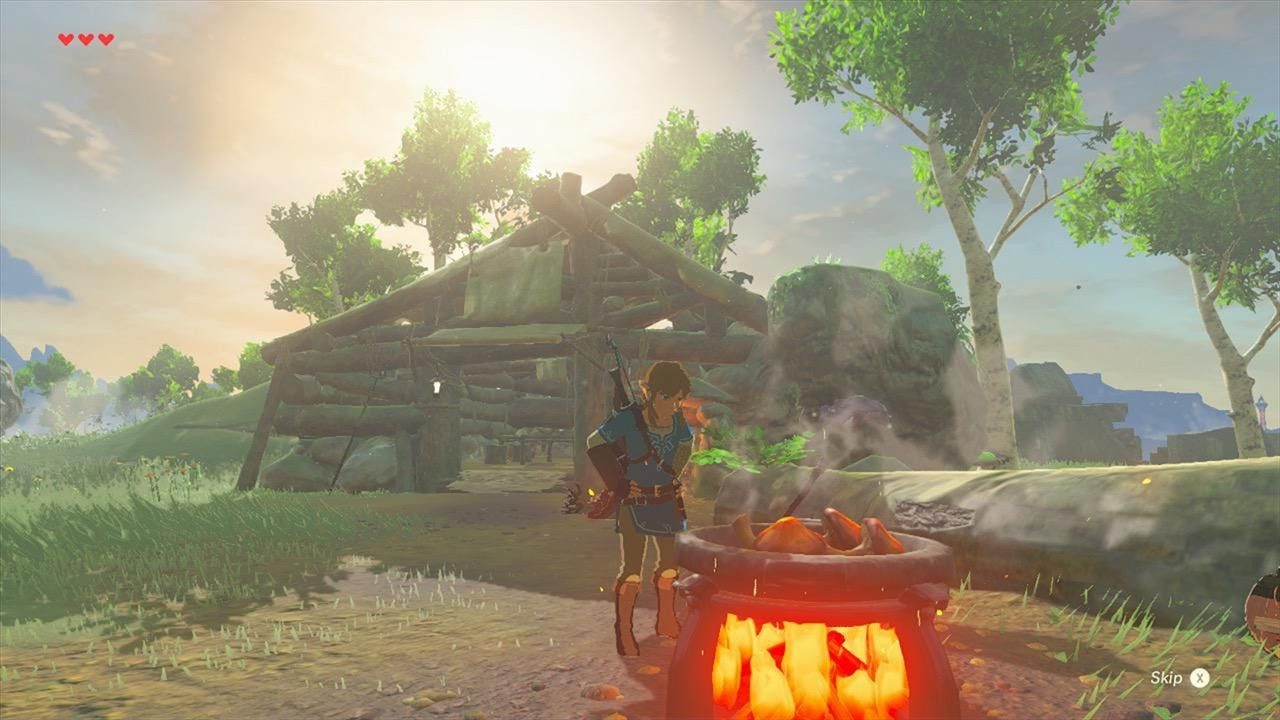 Right from the start, players learn that they must forage and experiment in order to make Link stronger. You want a weapon? Defeat an enemy or do some searching. A mere stick could be the only friend you have in dire situations, so taking advantage of the spoils of the land is integral to survival. Finding items and crafting also adds a thick layer to the experience, as it gives those little, worthless items that would have been considered trash or selling fodder in prior titles an actual meaning. Need health or a cure for an ailment? Get to cooking. Need a strong weapon? Start with a torch and work your way up. Players have to be resourceful constantly. That is where a lot of the charm of the game lies. Even if it is for something petty, the loot you find will probably have a purpose, so it’s best to hoard and upgrade in order to always keep an inventory. 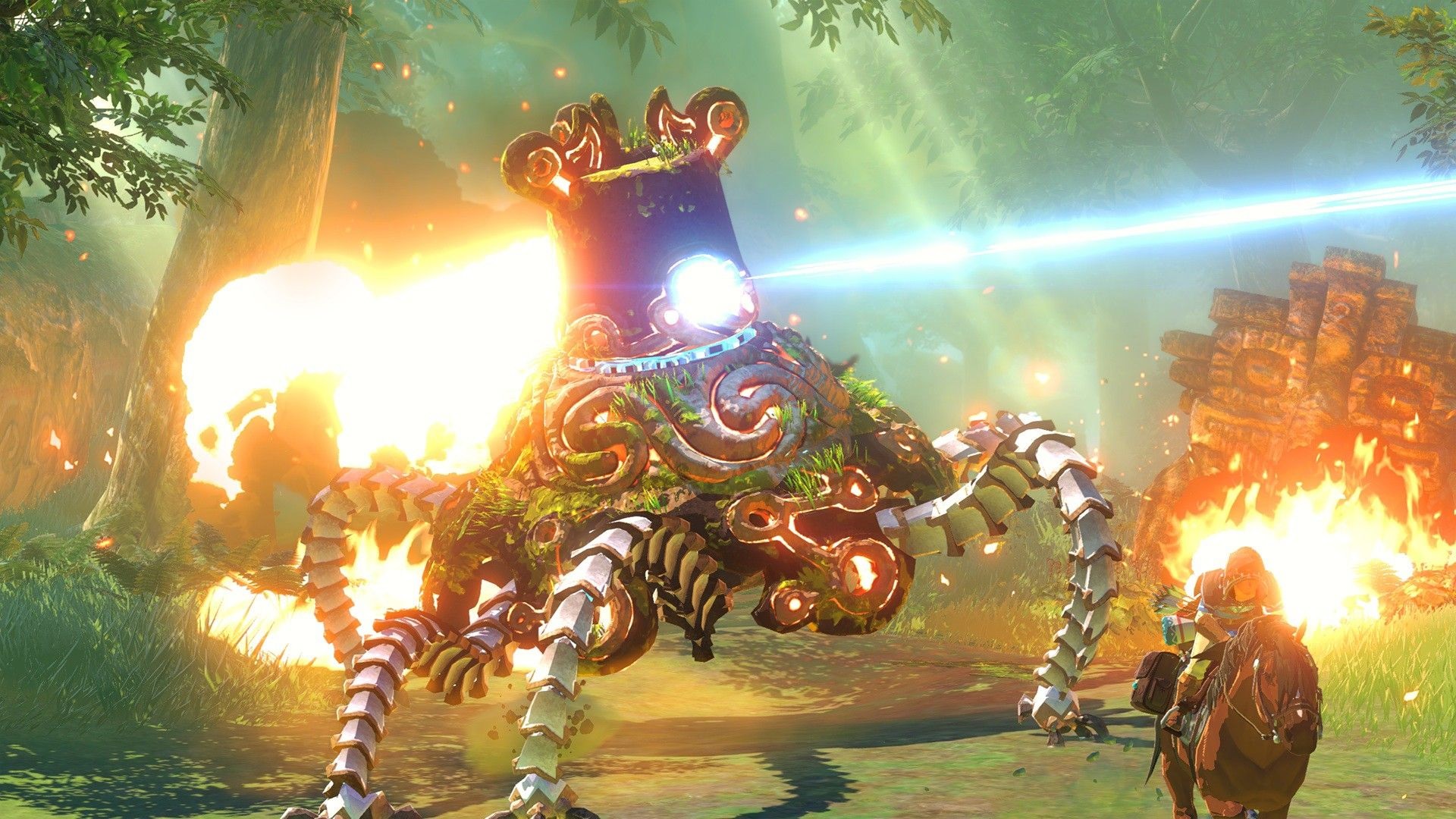 Another ailment that makes crafting so pivotal here is the durability of weapons. Most weapons you have can break. Early on, they break quickly. This means that if you decide to swipe that club or axe and use it for battle, expect for it to only last for one, or maybe two battles. The stronger the choice of weapon, the longer you have it. This also goes for other items as well, though bows of course will have far more use due to the lack of melee combat required (keeping arrows however will be another thing to keep up with). Sure, this can be frustrating  – but I feel that Nintendo did this purposely to demand exploration and more feeling around is this world they created. Those who want to know about the famous puzzle solving will be happy to know that not only are the puzzles back, but they are actually more challenging this time around. 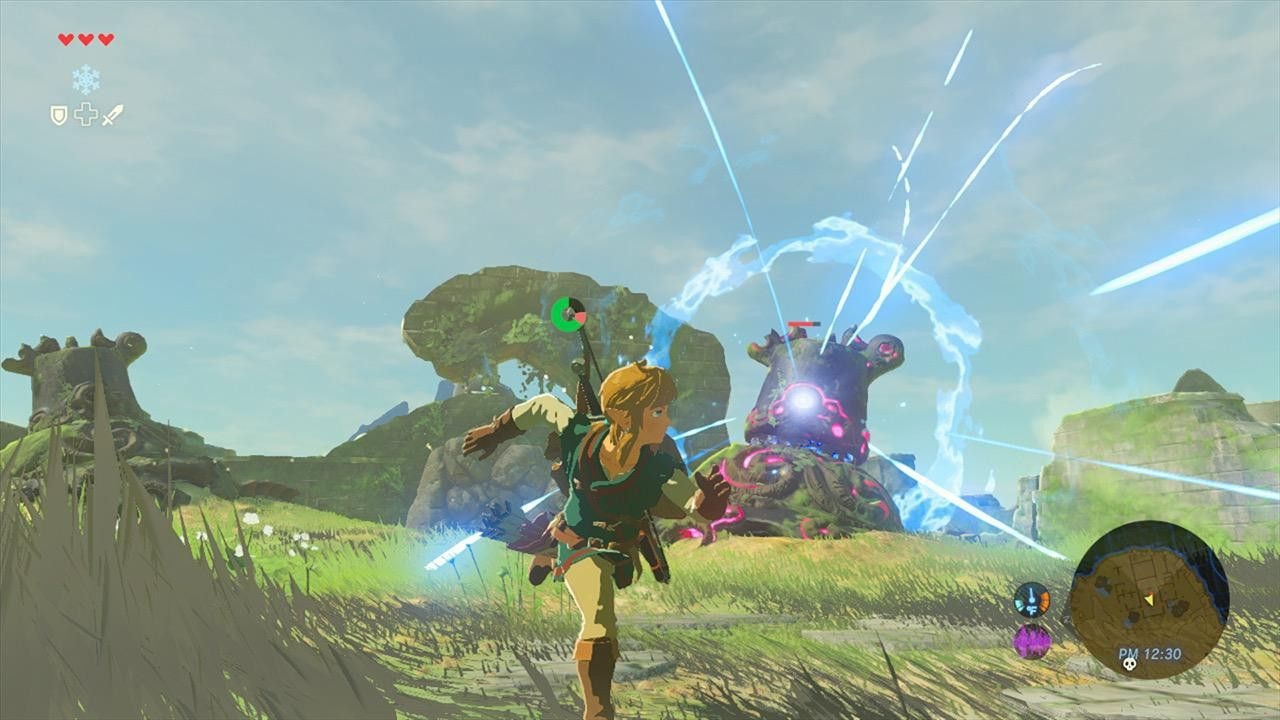 The Sheikah Slate is your tablet that will be your guide of sorts as you travel. This device allows Link check and mark the map on a whim, as well as provide the ability to utilize bombs, freeze time for short periods, and tap into other runes for special abilities that assist in puzzle solving. This is kind of that classic Nintendo move that puts the platform in the palm of players’ hands, with simple shoulder inputs controlling these powers and making it feel useful anytime the situation to utilize it arises. The story is so secondary to the tools that you get to use to explore, as everything is so interactive. A patch of grass can have buried secret, a group of trees hold unforgettable stories. Sure, the combat is fluid and the game itself functions well, but Breath of the Wild’s legacy will be remembered for allowing the player to grasp everything in sight and never stop experimenting.

There is no other Nintendo title that looks quite like Breath of the Wild. With warm, pastel tones, this game has a unique beauty about it, and the animations make this world feel immersive and real. We have seen Zelda in HD, but this is the first time that we have seen the franchise built for HD, and the result is exquisite. You can go to nearly any area on your map and just pick a simple place to stand, and then take a moment to appreciate the animations of weather, grass blowing in the wind, and even little insects buzzing around the sunlit sky. There were a couple of moments that the game was pushed to the limit and had a very minimal slowdown, but truthfully that was nothing too jarring, as the hiccups with that issue are extremely light. 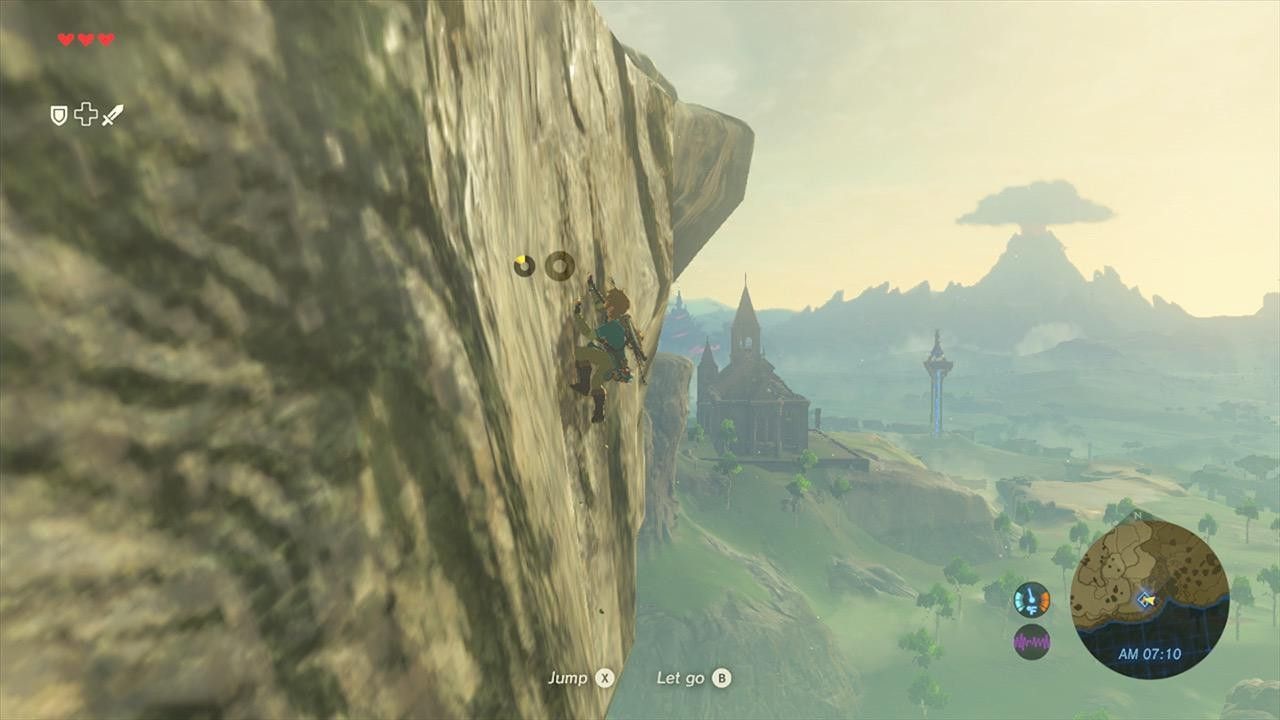 The soundtrack may be the best Legend of Zelda soundtrack to date. That is a big statement, but the way it presents itself is what makes it special. You see, most of the time the ambient piano is barely noticeable. Sure, it is pleasant and soothing, but I never caught myself turning up the volume. However, as you progress, you get to hear more personality come out based on your situation – be it quirky tunes coming from a scene with humor, exciting music during a battle, or gentle melodies to caress the player as the game taps into their emotions. The voice acting is also well done, but some of the performances come off as a bit campy and dry. That said, I highly doubt a few fluffy lines are going to stop anyone for taking in all of the other offerings.

The Legend of Zelda: Breath of the Wild is a journey for the player, allowing one to go in with nothing and explore at their own pace – unearthing one of the most magical video game landscapes ever created. In an age of our industry where originality comes in bleak forms, Nintendo have produced another landmark, setting a high bar of what the Nintendo Switch can do while pointing us clearly in the direction of where the company can go from here. To longtime Zelda fans, this is the Ocarina of Time you have been craving since childhood. This is why this franchise is on Nintendo consoles. If you were to stick any similar experience on other platforms, it would be a critical success, but quickly pushed aside once the next big title comes forward. Breath of the Wild is an enchanting masterpiece in the Nintendo Universe, as it will always have a heralded place saved for it – with an everlasting legacy that can only come from our pointy-eared hero that reminds us why Nintendo is such a special brand. 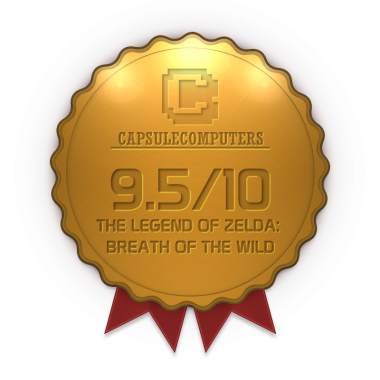 Link's Biggest Adventure Yet Launches with the Switch
9.5