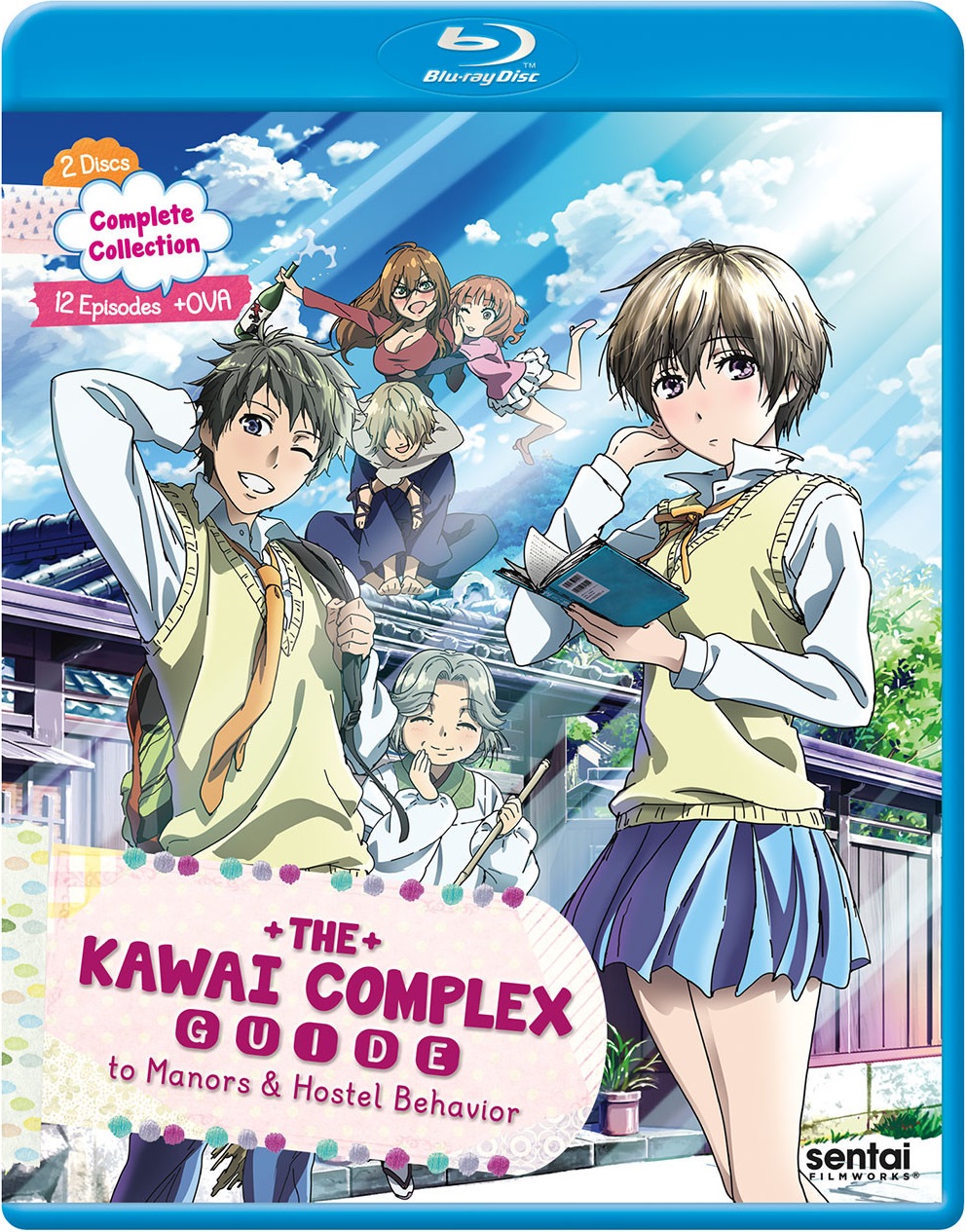 The Kawai Complex Guide to Manors and Hostel Behavior

There are certain series that helped lay the groundwork for certain genres and similar titles to grow from and Rumiko Takahashi created many of these series throughout the many classic manga titles she created in the past. One such title, Maison Ikkoku, has seen fewer notable titles that build upon the same concept as many end up being too simplistic to be worthwhile and now Sentai Filmworks has released the Blu-ray version of one of these few titles. With the lengthy name of The Kawai Complex Guide to Manors and Hostel Behavior is this romantic comedy worth sticking around for?

After his parents move away due to work, Kazunari Usa finds some freedom as he is able to live alone for the first time in his life. The problem is, the first year high school student has been placed at the Kawai Complex dormitory and while rent is cheap, the problems that come with the building are far more than a normal person might be able to handle. Usa finds himself paired up with a roommate that is as masochistic as they come, often enjoying even the most minor putdowns, and a completely unabashed pervert, sharing the building with a lovelorn woman who mends her broken heart with booze only to regularly fall for another dishonest man, and a woman who enjoys twisting those around her into knots using their insecurities and for leading people on into misunderstandings. 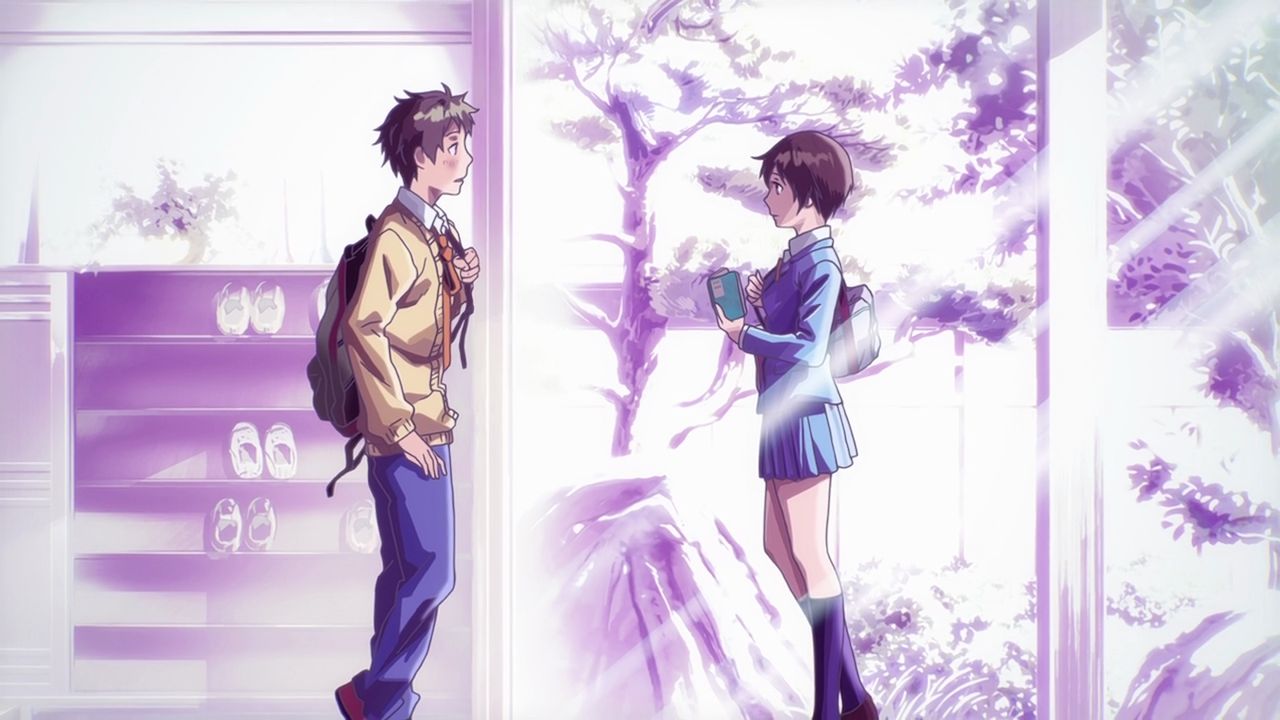 If that isn’t enough, the entire building is managed by an old lady who is more than happy to oblige these odd residents to a certain point and even goes so far as to provide the women with a vast array of weaponry to defend their separate wing of the building. One thing that gets Usa through these difficult times is the fact that the girl he fell in love with at first sight during school, Ritsu Kawai, is not only a resident at this building but she is also the granddaughter of its founder. Even though Ritsu may spend most of her time with her nose in a book, Usa is determined to follow through with his love and decides to stay at the Kawai Complex despite how complex the residents tend to be.

The Kawai Complex Guide to Manors and Hostel Behavior establishes a fairly familiar baseline right off the bat by introducing the viewers to the various quirks of the side-characters but unfortunately does little to nothing in regards to the actual main couple. Usa comes across as an incredibly simplistic nice guy who often lets himself get pushed around a bit too much by the rest of the cast while playing the “straight man” to their comedic antics and constantly pursues Ritsu in an effort to draw her out of her books and spend more time in reality. On the other side of things, Ritsu rarely reacts to what is happening around her other than to liken something to a story she has read though when she does react to something it is usually quite delightful to see a glimpse past her stoic exterior, especially in the few instances she does decide to let loose and open up. 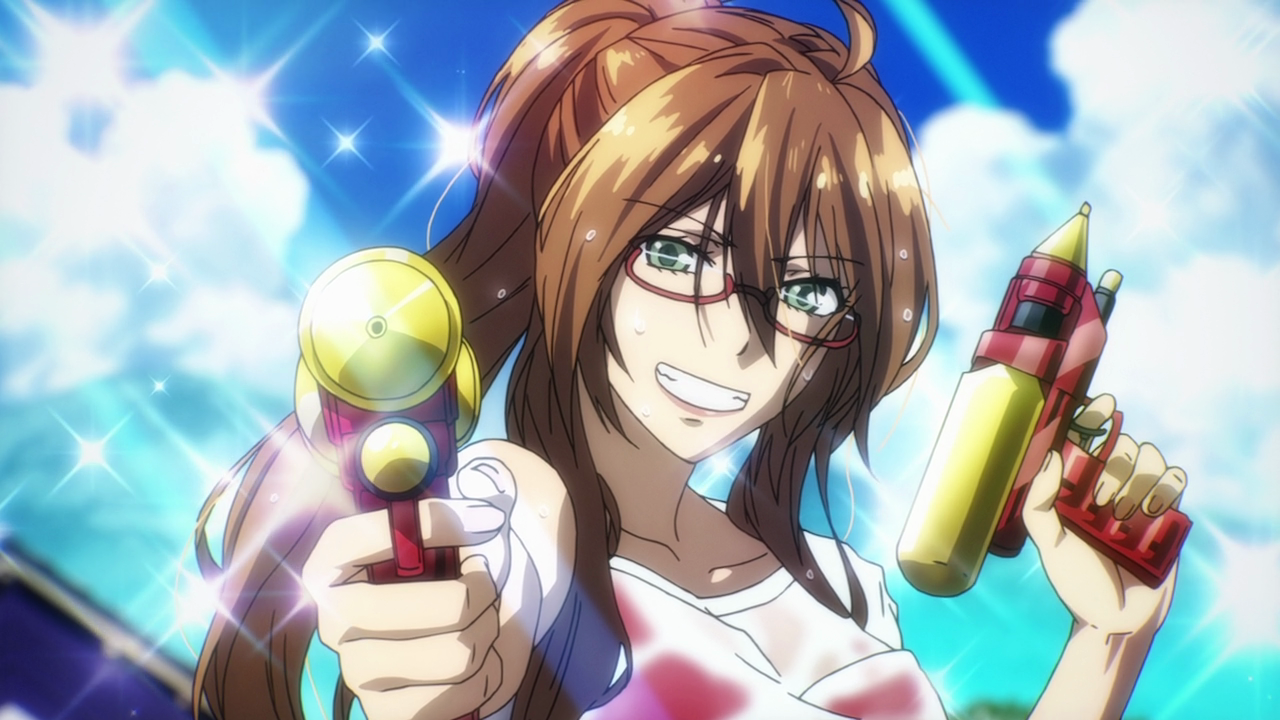 Because of this main pair being so bland, with Usa not having any hobbies besides focusing on Ritsu despite never saying why he actually likes her and there being little in the way of actual romantic development throughout the course of the series other than the two beginning to talk and Usa beginning to read along with Ritsu to try and grow closer to her, it falls on the side-characters to help bring life into The Kawai Complex Guide to Manors and Hostel Behavior and thankfully they do a great job here.

The masochistic roommate Shirosaki may appear to be a one note character but we see him as one of the most observant residents of the household as he is the first to recognize Usa’s feelings and although his perverted nature is almost always at the forefront by begging people to torment him or placing himself in compromising possibly illegal situations, we see that he cares about the rest of the cast. Mayumi, the oft drunk girl with love problems, and her foil Ayaka who loves to twist people around and manipulate them, also play key roles in messing with Usa once they learn about his feelings, with Mayumi often making him the target of her sorrow when she sees how happy he is and Ayaka taunting him or giving him poor advice. 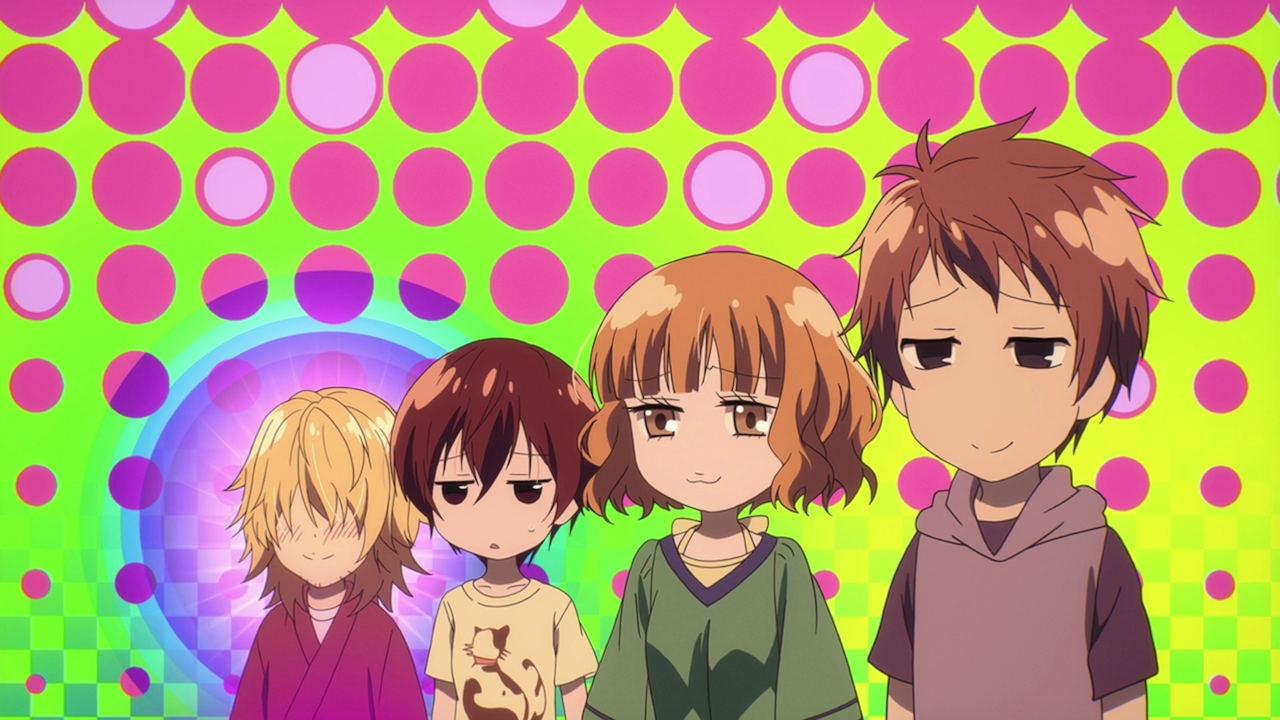 The mayhem and slapstick humor that these side characters provide, along with the manager Sumiko, give what may otherwise have been a bland series some much needed life. While the over-the-top nature of some scenes may be a bit much and they do tend to cause Usa’s relationship attempts to stall more often than they help, the amount of laughs these partially damaged people bring to the table and the eventual affects they have on giving Usa something of a personality bring this show to life.

Those who are familiar with the animation studio Brain’s Base know that the company can be a bit hit or miss at times when it comes to producing anime and thankfully The Kawai Complex Guide to Manors and Hostel Behavior happens to be something of a homerun for the company. There are some diminished moments in the middle of the release where the quality takes a bit of a dive but for the majority of this release viewers will be able to watch a gorgeous anime with a vivid color palette and some great character designs. 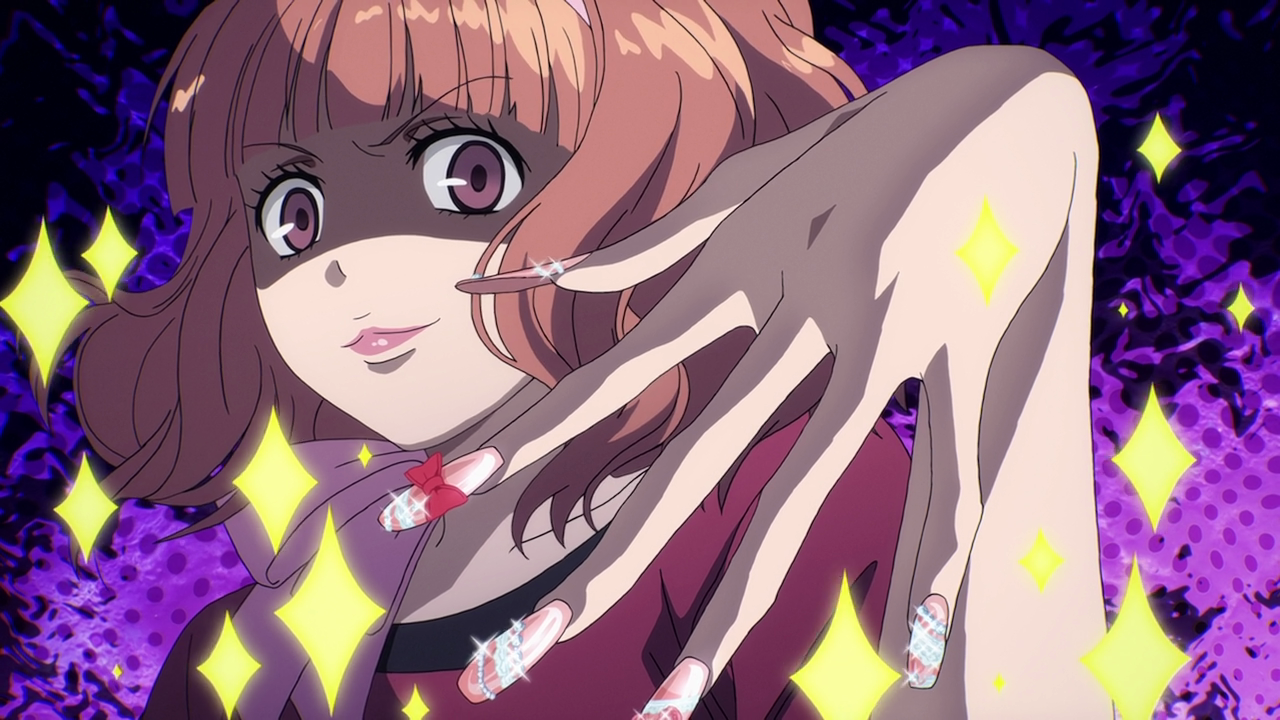 These designs are nicely detailed, with extra attention being paid to their faces, and vary enough with a few of the cast changing outfits regularly to keep things feeling fresh. Visual gags tend to be used quite often and it is worth noting that a lot of sound effects/text floating text is used to portray certain gags so be prepared to read the provided signs to understand what is being shown.

The Western release of this series comes with only the original Japanese voice track. The voice work is handled quite well as the various character archetypes come across well though they don’t really stand out too much except for Ritsu’s voice actress Kana Hanazawa giving the shy introverted girl a fitting voice that really shines whenever she steps out of her shell through embarrassment or laughter and Rina Satou’s handling of the lovelorn Mayumi coming across great with the various moodswings the character goes through at the drop of a hat. 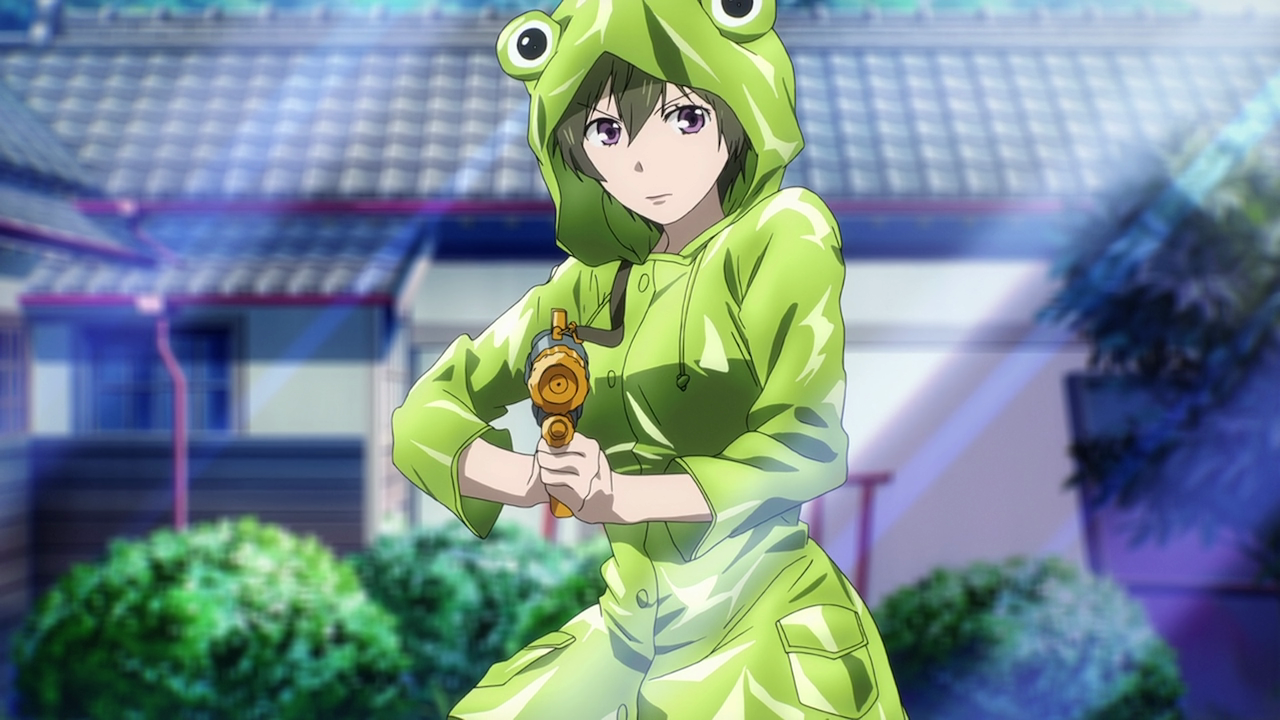 The background music is fairly standard for a series such as this with soft tones used during basic scenes and very little really standing out even during the few important moments. The opening theme “Itsuka no, Iku Tsuka no Kimi to no Sekai” is performed by Fhána while the ending theme “My Sweet Shelter” is sung by the Japanese voice actresses for the three main female characters and stands out as the better song of the two.

With the Blu-ray release of The Kawai Complex Guide to Manors and Hostel Behavior Sentai Filmworks has included clean versions of the opening and ending animations, commercial bumpers from the original Japanese airing, and trailer for other releases from the company. Alongside these standard bonuses the company also has included a bonus full-length OVA that appears to take place sometime after the last official episode and gives viewers an extra treat with the characters taking part in a school festival.

There are some shows that can get by with the personalities of the main characters alone but when a romantic comedy, or what eventually simply becomes a slice-of-life comedy with hints of romance, features a main pair as simple in nature as The Kawai Complex Guide to Manors and Hostel Behavior then you have a problem. The side characters provide plenty of silly and outrageous moments for Usa to deal with and eventually he develops something of a personality along the way but in the end this series is one that looks gorgeous and is fairly funny while you watch it but is something that does little to stand out in any memorable way.

Though sporting some rather funny side-characters, plenty of witty jokes, and beautiful artwork The Kawai Complex Guide to Manors and Hostel Behavior’s predictable and bland main pairing bring what could have been a great show down to that of a standard comedy with a few standout moments.
6.5