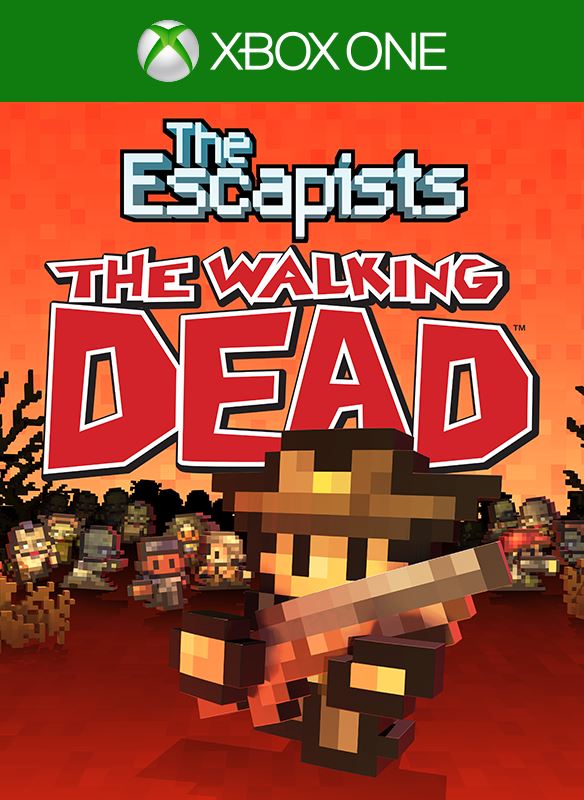 Story
While one would think that prior knowledge of The Walking Dead would be necessary to enjoy this game, it really isn’t due to the fact that the story presented in The Escapists: The Walking Dead is as barebones as they come. Adapting the comic book version of the story, players take control of Rick Grimes at all times as he first wakes up at the Memorial Hospital and realizes that the world has changed since he was shot by a fugitive. 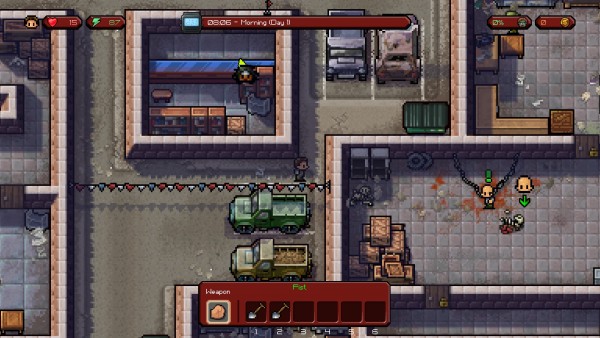 The story is presented through miniature 8-bit comic panels and brief summaries of events that take place between stages to set up the current situation but doesn’t go into any more detail than that. This is disappointing for fans of the series hoping to experience the story in a different manner, especially since more often than not survivors can die between stages and appear alive again in the next stage while brand new characters appear with no explanation, but also makes the title accessible for The Escapists fans who only want to see more of the original gameplay.

Gameplay
As mentioned earlier, players will control Rick Grimes and through five different levels, starting at the hospital, which serves as a tutorial level, before moving onto the Greene Family Farm, the Meriwether Prison, Woodbury, and finally Alexandria. Each of these areas gives players different types of puzzles that will have to be overcome to complete set objectives that range from simply killing walkers, to gathering gasoline, or rescuing your friends. 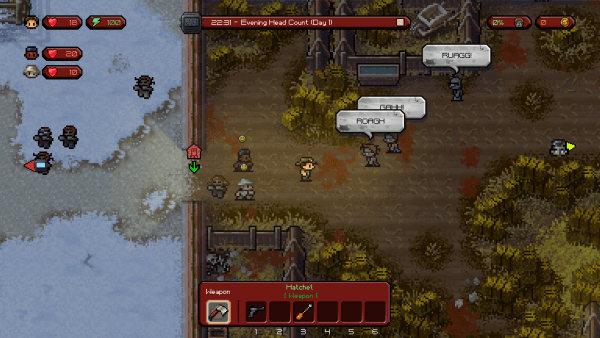 Throughout most of these levels players will have a fairly standard routine that is similar to what was found in The Escapists. Instead of having to worry about suspicious guards and the prison being locked down, players now have a schedule to stick to in order to keep the zombie percentage threat at a low level. These routines include a head count at the start and end of every day, usually a few menial jobs such as cleaning up blood stains or cooking food, and attending meals.

While these methods may not be the most enthralling, with jobs usually feeling forced in most cases, it does serve as a way to keep group morale high and if the zombie threat percentage starts to increase it means that there are higher chances of zombies appearing inside of a safe zone and attacking the player or another survivor. This is rather dangerous due to the fact that, although the player cannot truly die, other members of the group can be downed and if they aren’t revived in time will die and resurrect as one of the undead, or in some cases fail a mission. 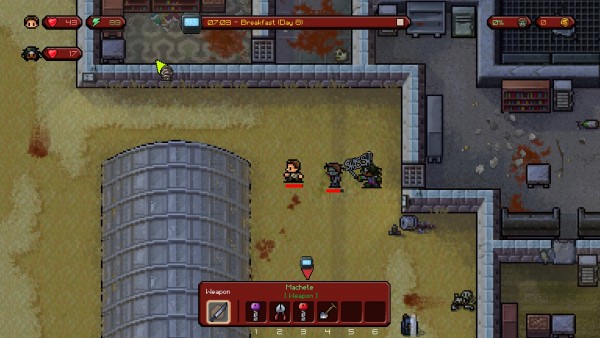 As the player, being downed usually results in simply skipping the rest of the day, a higher zombie threat level, and losing the chance to save for that night since it can only be done by sleeping at the end of the day. This isn’t too much of an issue since it doesn’t affect player stats nor does it remove any items or equipment that Rick is carrying making it less of a threat than it has been in either The Escapists or The Walking Dead. As for the aforementioned stats, players still need to work on keeping Rick strong, agile, and intelligent to survive in this world as various bonuses such as higher strength offering a larger health pool and more intelligence allowing fancier crafting coming as necessary requirements for most areas in the game.

Various tools, armor, and weaponry can be crafted for use by the player and their fellow survivors as long as you constantly keep an eye out for items you need. The majority of items can be found by rifling through desks that have new contents every day, with Rick’s desk being the only one that saves items (though dropped items never disappear either), in order to find various components that can be used to create and enhance a shovel that may serve as a great way to dig your way under a pesky door, or create a barricade to hold out against the zombies, or even modify a firearm to deal even more damage or hold more ammo than before allowing players to dish out damage from a safe distance with lock-on firing mechanics. 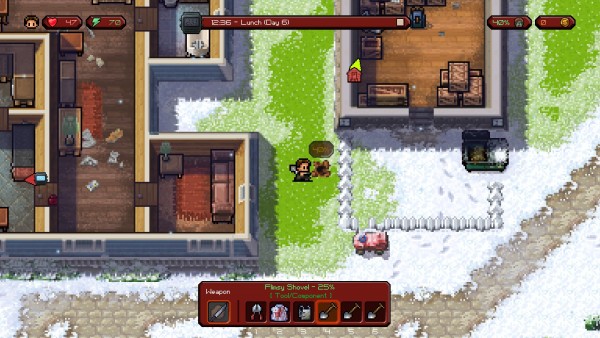 Exploration serves as a great tool to try and uncover as much as possible since there are various crafting tips scattered around each stage and of course players can use trial and error to come up with a weapon, though some of them are quite out there and a large number are recycled entirely from The Escapists. It also means that there is no single way to solve any task. Most puzzles can be tackled in a variety of ways and finding your own path is half of the fun though it is worth noting that it is possible to grow overpowered easily if you focus on training and stumble upon usually easy to find high damage weaponry that will make only hordes of zombies seem threatening.

This becomes even less threatening if you compound the ability to bring other survivors along with you to search for items and face off against enemies. These survivors will fight alongside the player until they are dismissed or are downed in combat where they will then return back to the safe zone to sleep. Your allies can also provide various fetch quests that are never more exciting than bringing them a specific item, killing a zombie with an item, or fetching an item from a desk somewhere, but reward the player with coins that can be used to purchase various changing items from merchants at night, usually ones that can help turn the tide in the player’s favor if they do end up struggling in any way.

Visuals & Audio
Similar to the original game, The Escapists: The Walking Dead features a 8-bit pixel style form of artwork which works surprisingly well for the majority of the cast as many characters have been replicated in a successful manner that fans will easily recognize who is who, with the story panels also featuring the same level of detail albeit cut to a minimum. The various levels are also replicated well with the varying styles in these areas offering a unique feel to each stage that the player has to try and survive through. 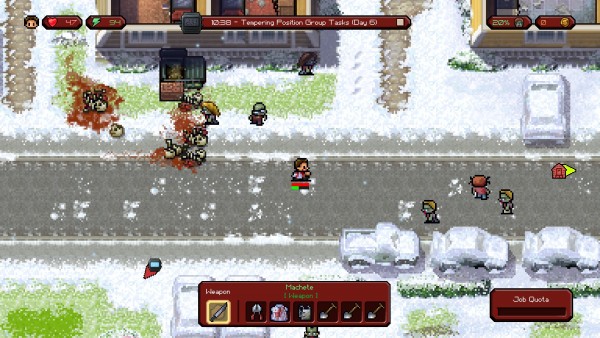 The soundtrack features old sounding tunes that fit well enough for a game about survival but never really move beyond that point while the actual sound effects range from being annoying to extremely basic in form with very little variation to be found although the addition of comic book styled sound effects above action scenes is a nice touch.

Overall
The Escapists: The Walking Dead is fairly simplistic in nature, despite having some level of depth here and there, and certain alterations to the formula also make it is far easier than the original The Escapists despite featuring most of the same content reskinned for this release. That being said, it does put a fun enough twist on the original formula and brings in enough content that The Walking Dead fans will find enjoyable, though unless you struggle with certain aspects or get lost in trying to complete an objective, the title is rarely challenging.