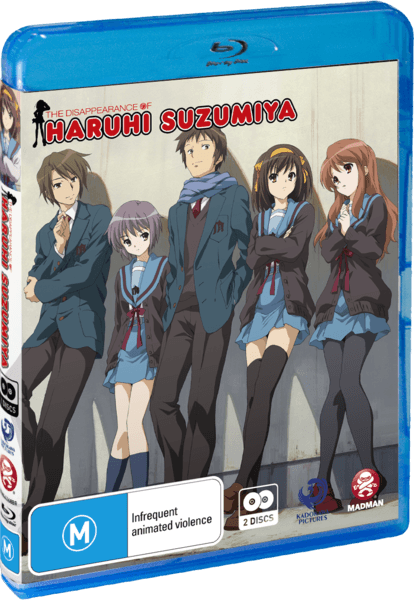 Overview:
What if one day you awoke to find that the world around you had changed? What if the friends you had in your original world were not the ones that you had in this other, different, world? What would you do in this situation? How would you feel?

For Highschool student Kyon, member of the SOS Brigade, this is his world now. This is a reality that he must deal with. This is a world where everything he once knew as fact, may now be fiction. This is the world presented in The Disappearance of Haruhi Suzumiya.

Story:
For Kyon, the story picks up as it would in any other instance. He is a member of the infamous SOS Brigade, run by the very overly cheerful Haruhi Suzumiya, who we are led to believe may be a deity of some type – but she can never consciously find out about this fact. The club is filled with members who seem to serve some kind of role in making sure that Haruhi’s powers remain dormant. 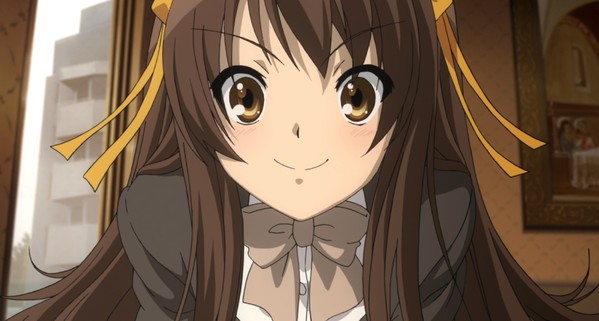 These powers manifest themselves as closed space, or at least that’s what the dialogue seems to point to. Actually, a lot of the story, dialogue and scenes point and reference things that have happened in the anime series. This may make it a little difficult for newcomers of Haruhiism to become fully immersed within the movie. I know that as a fan of the series, I knew exactly what was being referenced, but, a newcomer could very easily become lost in some of these references.

At various points during the story, there is an apparent juxtaposition between events from before the world changing event; and after it. This adds a level to the intrigue gauge of the viewer, as well as to the confusion of the main character.

However, I found that all the absolutely crucial plot points and references are explained in enough detail to cover the experiences of any new viewers, but the story, I felt, was being told to an audience that has had previous exposure to the franchise; whether it be the novels or the Anime. Ultimately, however, the story is an excellent ordeal and should be seen by as many people as possible. I’d very quickly recommend this title to anyone based on story alone.

Visuals:
The animation in The Disappearance of Haruhi Suzumiya is of a superb quality, the crew must have been very involved in the series for it have reached such levels. I mean, really, I postulate that key members of the staff must have been fans of the original light novels for such quality to have been expressed in the creation of this title. 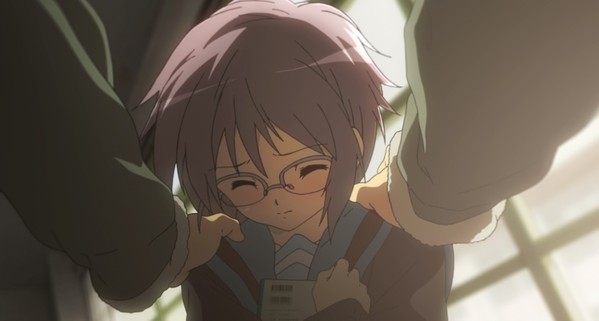 Everything in this film blends so well together. By the nature of the animation, there is obviously some CGI being used somewhere, but, it does not stick out like a sore thumb as it does in most other anime titles. Instead, it fits in perfectly, and is used in such a way so as to enhance the feel of a scene.

One of my only gripes about this film, is that some scenes feel like they’re being dragged on for a little longer than they should be. But I’m not sure if this was done intentionally to capture the feel of a scene, or if it was some kind of accident; or even an event of my own impatience.

Audio:
If only the Audio carried the same amount of oomph as the rest of the package… I mean, yeah, the Audio fidelity is fantastic, the score is brilliant, but, the dub work leaves a lot to be desired.

I know that there is a lot of commotion in the fandom in regards to dubbing; and while I felt that Kyons dub was a little slow; it could be a characterization of his main character traits – bored, and complaining. It seems that all characters have their voices tuned to their personalities: Kyon is drab, Koizumi is pretty boring (much like a lecturer, which he seems to take the role of within the SOS Brigade), Mikuru is annoyingly kawaii and Yuki is robotic. 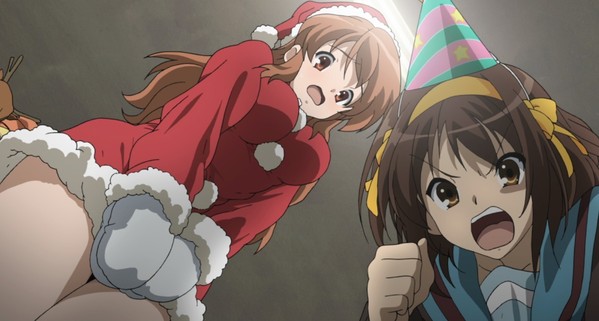 Watching the movie was the subtitle track on, I found that the audio often diverged from the subtitles. That isn’t to say that the audio was not accurate to them. This disparity is only going to annoy the most pedantic of individuals, you would need to be suffering from some kind of OCD to be too worried about the differences in content.

The Japanese audio track is also incredibly well recorded, but as someone who started watching the series in English, I found it a bit strange to hear the characters speaking in a different tongue. What I found good about the two dubs though, is that (I thought) the characters had very similar voicing.

With an excellent score (recorded here in Australia!), a pretty good audio dub and all of it mixed incredibly well over 5.1 audio channels – it all mends together into one incredibly nice audio package.

Extras:
The main disc comes with a selection of trailers, K-ON, Gundam 00 A Wakening of the Trailblazer and The Girl Who Leapt Through Time. Also included in the package is a bonus Special Features DVD, packed with extras – and I mean packed – and (I’m not entirely sure if this counts) a nice piece of artwork of Yuki Nagato behind the covers. 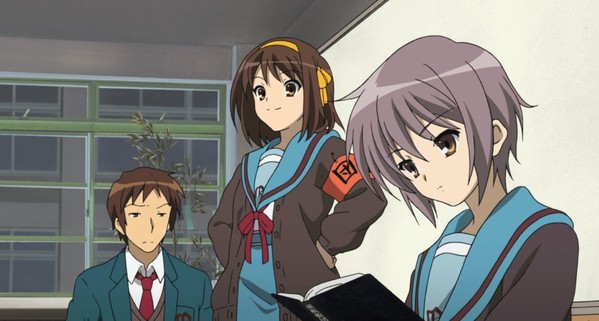 To list the interesting extras included on the DVD, we have: Location Hunting “Konan Hospital” (which is an incredibly interesting feature on the crew looking for references in their art, used in the movie), Behind the scenes BGM recording at Victor Studios (here in Australia! It’s an interesting look at the audio process and the crew chat about some interesting topics), Stage greetings at Tokyo and Kyoto (both are seperate features, but are fairly entertaining. The main cast are present and tell amazing jokes, as well discuss various aspects. The main thing I took from these was that Japanese woman are incredibly timid and cute. I have to say though, that while the Tokyo greeting was entertaining, the Kyoto one was interesting.), behind the scenes cutting, dubbing, video editing (which is a fairly extensive look at the processes and actual recording, dubbing, cutting and video editing used within the film.), Recording of the Theme Song used in the credits of the film “Yasashii Boukyaku” (which was performed by Chihara Minori.

It has a lot of on location filming for a Promotional Video) and lastly, there is a bunch of trailers, teasers, promos and the like used during the advertising period coming up to the films release in Japan (which most are similar).

Madman have also generously packaged a small selection of trailers for their products as well. They’re always a welcome addition, as it is often easy to be left behind on the current series being released here in Australia and there is usually something intriguing enough included to at least get you into researching for a new show to watch. 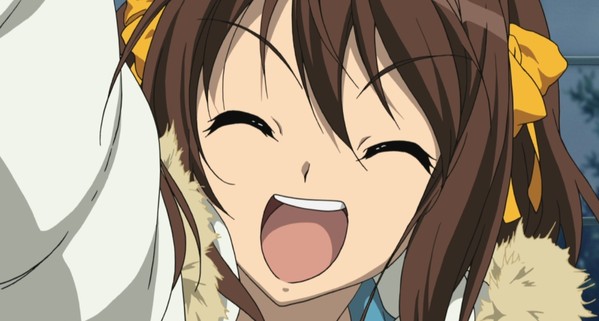 All the extras on the disc vary in length, but there are a lot of long features on this disc. The special features disc could even rival (or overtake) the film in length and adds an ENORMOUS amount of value to the feature film.

Overall:
Sadly, this review is not able to share the sense of humour that is told alongside such a lonely tale. This movie has such a great combination of humour, narrative and humanity, as well as such wonderous events told in a manner to keep you intrigued, as well as entertained. If you’re a fan The Melancholy of Haruhi Suzumiya, into anime movies with an air of mystery, or are even vaguely interested in anything – I’d strongly urge you to pick up this movie, The Disappearance of Haruhi Suzumiya, immediately.