It’s really rare when I become hyped over any iOS title, but I literally counted down the days to release with Phosphor Games’ The Dark Meadow. This title places the player in an abandoned hospital that is over-run with evil. Assisted by an elderly voice over an intercom and a couple of weapons, it is now up to you to put a stop to this and dig deeper to find out just how your character got mixed in among the madness within. So how does everything come together for this eerie and ambitious iOS game? Here is my review for The Dark Meadow. 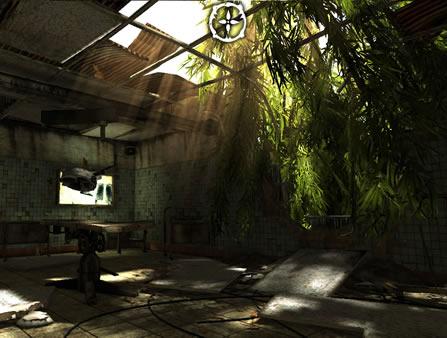 Story
The Dark Meadow starts out with your character waking up in an abandoned hospital that has apparently been vacant for years. A menacing yet campy personality soon greets himself over the intercom system, providing a bit of clarity of just why your there. Not all is known though, as this title’s plot mainly consists of exploring this creaky old building and just trying to survive while you look for answers. This may sound a bit light on actual narrative, but the brilliant writing given to this “mysterious voice” that plays while you explore your new surroundings makes the journey interesting, eerie, and humorous until the very end.

You see, The Dark Meadow is all about exploration as several newspaper clippings, dusty books, and other findings are worked in to give a bit of background and depth to the story that in turn provide incentive to progress. This setting is full of a dark and mysterious tone as well, where each path you choose to take could very well unlock more secrets along the way. One other thing that was really stand-out was the minor details given to each level, such as old posters that literally told stories of the past while also giving off a reason to chuckle from time to time. After just a few minutes in, it’s quite obvious that Phosphor wanted the player to feel as “lost” as the main protagonist in this creepy hospital and thankfully, that objective was a success on their part as this may be one of the most immersive experiences I have played on the iOS. 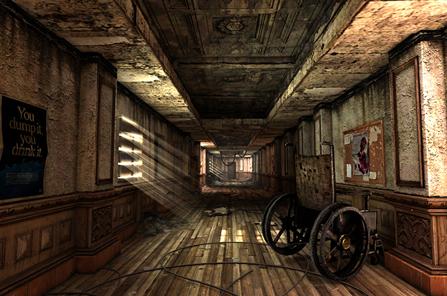 Gameplay
My biggest fear before playing this title was how the game would control. I think most of us are familiar with the usual “touch-stick” that can be a pain to use for most titles of the same genre, but thankfully The Dark Meadow uses a point and click method for exploration. This works with the player tapping glowing points located on the floor, walls, and doors of each hallway, with the character moving automatically to that position without fail. Players can also slide their finger along the screen to turn 360 degrees and get a full view of their surroundings. Yes, everything is very simplified, but the quick and easy exploration allows for you as the player to take in the rich atmosphere that is presented without having to deal with the frustration of fighting with the touchscreen.

Most of the environment can be interacted with a tap on the screen. For instance, if you see a cabinet or a closed drawer, a simple touch will open it to reveal whatever may be hidden inside. This element may sound small, but unless you want to utilize the “pay for in-game currency scheme”, it’s almost a necessity to check every nook and cranny of your surroundings. This currency system also plays into an RPG aspect that The Dark Meadow so wonderfully executes. From the beginning, the player is allowed to access nearly every weapon and perk from the start by opening up the menu and cashing in their gold for a better crossbow, sword, or hit point boost. Grinding against enemies is a must to survive, as both EXP points and gold is rewarded after each battle. The concept is to pretty much use the gold, buy better weapons, and simply not die as often through the process of grinding. I normally don’t like the whole “pay for perks” scheme, but Phosphor’s setup gives the player a choice if they want to breeze through enemies by dropping some dough or to grind their way through the hospital the old fashioned way, so it all comes down to user preference in the long run. 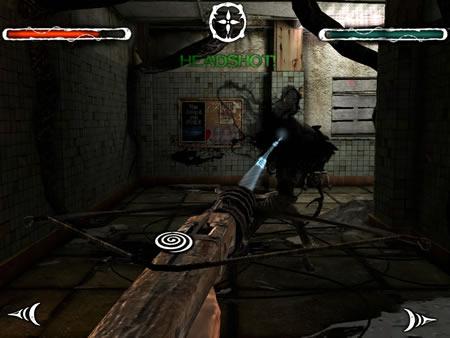 Battles in the game may be one of the stand out features. As you trek your way through the hallways, various frighting foes will pop up out of no where and attempt to tear you apart. These bouts always start at a distance, with the monster slowly marching toward our protagonist and require two methods of combat to be utilized to be successful. The first method is for distant combat in the form of your handy crossbow. While the enemy is closing in, the player can fire arrows to lower their life bar before the close combat begins. Proper aim is everything as well with this, as these demons are fantastic at dodging and can be a bit tricky to hit without a steady hand. Shooting is not really a chore either, as all that is required is to pull back, aim, and fire. To keep the player on their toes, certain enemies can fire projectiles from afar, so you must observe the patterns of each type of enemy and safely dodge left or right using the commands at the bottom of the screen. 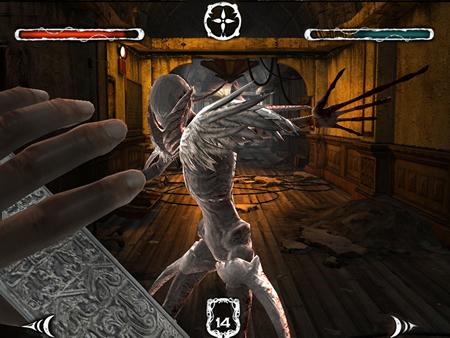 Close combat is executed with a sword and requires a bit more work than the crossbow. Once a foe approaches, the player will yank out their sharp weapon of choice and do battle “Infinity Blade” style. The same dodge commands are also in effect here, but this time it’s more crucial to execute them correctly. Most opponents usually either attack from the left, right, or jump from the center. Once that attack is successfully dodged, a prompt will appear to “ATTACK NOW” and you can take your finger and slash away until the enemy regains focus. I would say this is method of battle is part offense and defense though as if you don’t effectively dodge or block successfully, the process will then have to be repeated until the enemy at hand is stunned. Thankfully the touchscreen controls are always responsive and make this process addictive and fun throughout the entire game.

While everything is nearly perfect in the form of combat, The Dark Meadow still has a couple of small flaws that can hinder the experience. As I mentioned, the enemies and eerie setting make this world one that can easily suck the player in. After each battle is completed though, a victory screen will pop up and require you to watch your level and stats go up. I know that this is pretty standard for an RPG, but having that stat screen pop up completely takes the player out of the hospital and into the feeling that a game is being played. It’s a very minor complaint, but imagine if you were playing Resident Evil and killed a standard zombie and then had a menu pop up to display the currency you collected. The environment you have immersed yourself in would then disappear and you would then have to re-attach yourself to your surroundings. I got that feeling after nearly every battle and while it wasn’t nearly as crippling as it sounds, it still proved to be one of The Dark Meadow’s most prominent annoyances.

The other “flaw” really isn’t a flaw at all and one feature that I enjoyed, but some may find it to be a bit frustrating later on in the game. After you die, you’re returned to the very beginning while retaining your current stats and weaponry. This means that the player must traverse back to their previous location and do battle with any demons that get in the way all over again. This hospital isn’t huge, so most will not have a problem here as the extra grinding definitely comes in handy for the larger enemies later on, but it can be a bit frustrating having to start all over just after you found a new area to explore.

Graphics/Audio
Graphics, yes…where to begin. When I first seen the trailer for The Dark Meadow, my first thought was “this can’t be an iPhone title” as that clip alone displayed some of the most detailed environments I had seen on the platform. Needless to say,= my expectations were pretty high. Thankfully though, even that trailer didn’t give this game true justice as this may be one of the most atmospheric experiences I have played to date on the platform. Each room and hallway is covered in detail which makes exploration feel rewarding and enjoyable as you progress throughout this run-down hospital. Light creeks through old shutters, scraps of paper are browned from age and scattered about and every area can tell a story just through the former signs of life found within. Enemies are also unique in their own way, as these foes are just as twisted and menacingly designed as the world the inhabit. Due to the platform, one might expect a bit of framerate problems to occur, but I only had a bit of slowdown during a few battles out of the many I played, so the level of polish Phosphor applied is easy to be admired and makes this journey into the unknown an unforgettable one. 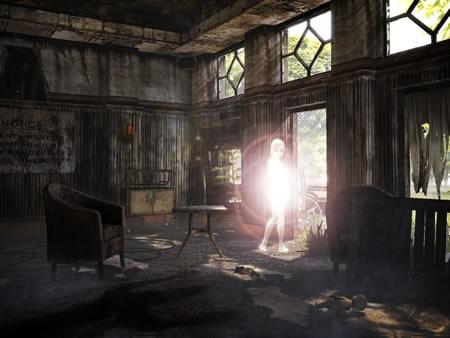 There really isn’t a lot to talk about in the form of an in-game soundtrack for this game, as The Dark Meadow usually lets it’s eerily realistic sound effects take control of all the audio. The elderly guide that assists you was also given some fantastic voicework. One minute he can send chills up your spine by threatening of a great challenge up ahead while the next the player will be provided with a bit of dark humor to explain these “new” surroundings. Without this insane assistant I still feel like I would have enjoyed the entire experience, but these dialogue sequences add a ton of personality to game and truly separate it from all other contenders on the market.

Overall
The Dark Meadow may very well be the most ambitious iOS releases to come out of 2011 so far. The atmosphere that was created is unrivaled in my opinion for the platform and the battle mechanics feel as polished and as the vivid setting that surrounds your mysterious character. Not everything in this world is perfect, but even with that said, I still would think that most are not going to let minor annoyances such as interrupting stat screens effect their enjoyment while exploring the dark and dusty environment ahead. If you are a fan of RPGs, survival horror, or just are looking for something to push your device to the limits while providing a few laughs and chills along the way, you can’t go wrong by investing six bucks to check into this hospital of horror.

I Give The Dark Meadow: