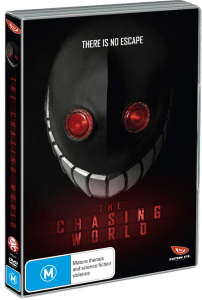 Yusuke Yamada’s best-selling novel, “Real Onigokko” is about a King who decided to kill everyone in the country with the popular name “Sato” for sport in the year 3000. The Chasing World is loosely based on this novel, changing and adding many extra elements to the story such as alternate realities, supernatural powers, setting it in the present day among other drastic changes, and had a very low budget for filming. While it may not be faithful to its original source material and filmed on a small budget, The Chasing World is quite engaging and has many qualities such as its characters and concept which maintain the interest of the audience. However, there is much to this film which holds it back from seeing its true potential, but still remains easy to recommend to fans of Japanese cinema. 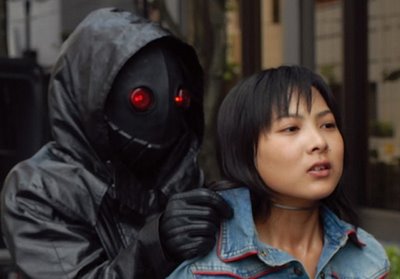 The Chasing World focuses on Tsubasa Sato (Takuya Ishida) who notices that many people with the last name “Sato” are are falling victim to mysterious deaths all over Japan. He is soon transported into a parallel world exactly like his, only with an evil King having everyone with the last name “Sato” being captured and killed by convicts playing a sport where they must kill people with the name “Sato”, but by following strict rules. By killing them, they get reductions on their sentences, and if they die in this world, their double in the parallel universe in which Tsubasa Sato comes from dies as well. He teams up with with others with his name, including a parallel double of his sister in order to survive the game, and uncover the truth of the King and thw parallel worlds.

The concept of the film is engaging and entertaining, however, many aspects seriously hold it back and bring the majority of the movie down with it. Without ruining too much of the story, there are various unconvincing plot points and even more importantly, various obvious plot holes that can disengage the viewer from the experience. There are a few plot twists in the end which do come as a surprise and are insightful, but they also have problems with unbelievable plot points and problematic plot holes as well, which will make many feel quite unsatisfied. Furthermore, so many themes are touched on in the film and yet either are barely touched upon, or are almost never explored, such as fate, parkour and the working of the supernatural powers. There is a common saying of the protagonist in the film “nobody can catch me” and its true; as no one can. But they never explain why, which just makes everything seem slightly stupid, as if to say “nobody can catch him, because he said they can’t”. The worst part however seems as if director Issei Shibata appears as if he doesn’t know which target audience he is catering too. There is some slight gore in the beginning, but it never resurfaces for the rest of the film. The chases are engaging and feel straight out of a 90s Hollywood slasher, but often the music isn’t dark enough to project the sense of fear into the audience. It has a Sci Fi theme, but doesn’t explore the details of it much, and many physiological themes are implied, but rarely if ever referenced too. Sometimes it feels its meant to be a martial arts action film with the parkour-styled chase scenes, but they are very short lived, and there is evene a martial arts fight scene which while good, seems really out of place as they spend the entire films running but all of a sudden, for once scene they can fight against them really well, for no apparent reason. The point of a film is to entertain, and it is entertaining, but its confusing trying to tell what type of audience the film hopes to entertain.

However, if one can look past these issues, most of the actors do preform well and the characters are likeable and will most likely grow on you, and the concept and story is still engaging, action packed and filled with twists, so if you ignore a few flaws here and there, its easy to see the charm of The Chasing World which can be very captivating. 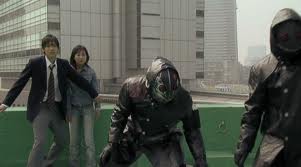 A highlight of The Chasing World are the characters and the actors that portray them. To the most part, they play their roles believably and as the story progresses, so do the characters with character development, and most are easily likeable, only brought down by the films occasional issues with plot. Its also interesting to see characters shown in alternative realities and how they are all linked together. The character of Ai is easily the most interesting of the bunch with a unique, mysterious vibe to her, and is played splendidly by Mitsuki Tanimura. In both worlds Akira Emoto plays the villain, but sadly he just doesn’t seem threatening enough as an actor to fulfil the role without a scary mask. However, Takuya Ishida does a excellent job as protagonist Tsubasa Sato, being both likeable, innocent and heroic enough to lead the film, with believable performances. Shunsuke Daito should also be commended for his acting as Hiroshi Sato, as he played two very different roles which both see plenty of screen time and pulled it off well.

The biggest issue I found was while the Chasers have amazing costume design and move like scary killers, they act more like robots rather than convicts, and therefore damage the belief in their performance. If the story had them as robots or trained assassins maybe, but rapists and the everyday typical killer? Highly doubtful. However if you ignore the fact their meant to be just random convicts, the Chasers are just plain awesome. They move and act like a Hollywood slasher killer, and have menacing costume design which is easily recognisable and memorable. They’re designed so well that at times its like they carry almost the entire film on their shoulders, as while not every scene is entertaining, scenes involving the Chasers are quite thrilling. 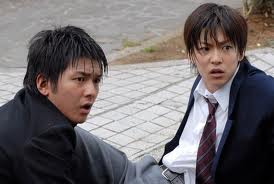 Costumes are decent for the most part, although the king and his henchmen do seem a bit out of place like they should be from a superhero cartoon. The Chasers however look amazing, threatening and memorable, and simply just  really, really cool. While they do look a little bit like they were ripped straight out of an anime, they’re not over done and they do fit in, unlike the king and his robed henchmen. There are a few scenes of oddly placed gore, which do look great and believable, although there is a scene where a pair of severed legs do continue to run without a torso. It looks cool, but technically speaking its impossible and unnecessary. There is also an explosion in the film which is obviously CGI, and seems rather cheap, but it does its job. Teleportation scenes between worlds look cliché, but done well. There is very little make up used on the actors as well by the looks of things, for example; the main character as acne. Its doesn’t take away from the film, but you can tell it was made on a low budget.

The audio does its job, all tunes are good and coherent, however, the choice of certain scores in particular scenes of the movie don’t make too much sense, most in particular the chase scenes. Sometimes when a Chaser gives chase to a Sato, there is scary music which builds an intense, nail-biting atmosphere. However, a few scenes contain slightly upbeat, violin-based music which destroys the fear of the scene, and seems rather inappropriate. I can’t help but wonder why this was chosen to include this, as the scenes with the horror-themed music are quite captivating, while this other style of music seems inappropriate, as the actors are acting scared but the music sets the mood for a non-threatening situation. However, with this aside, everything else is great. 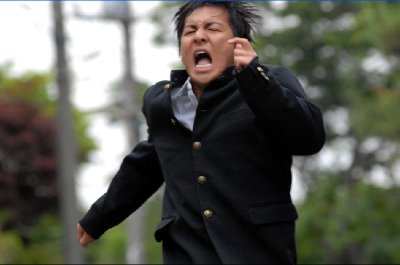 I feel The Chasing World is the result of a director trying to squeeze too much into a movie, where if he chose to keep it more simple the film would’ve been more entertaining. It contains sci fi, parkour, martial arts and horror, and touches on themes such as parallel universes, rape, murder, fate, family, human rights, mental health, deception and many more. The low budget and the script of the film seriously hold The Chasing World back from what it should be. The low budget special effects can be easily overlooked, but its unexplained character traits like the protagonists ability to never be caught and the behaviour of the Chasers, as well as plot holes and unconvincing plot points which holds the movie back. With all this said however, its still a good film. The concept is engaging, the plot is constantly moving forward, and is action-packed along the way. If The Chasing World focused more on either the action or the killing, perhaps the story wouldn’t of been such a big issue, but since it focuses more on uncovering the mystery behind the king and the supernatural and explained poorly, its really a hit and miss of what its aiming to be. There was a sequel to follow this film though, hopefully these issues have been addressed in that film. With all that said though, if you need a reason to go watch The Chasing World, I’ll give it to you in two words; the Chasers, cause those guys are bad ass!

I give The Chasing World