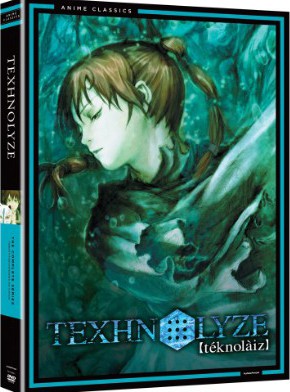 Overview:
Texhnolyze, pronounced tech-no-lize, seems at first glance to be a very experimental anime.  It deals with a lot of very common themes from dystopian societies to robotic limbs.  Being released as an Anime Classic since its original run back in 2003, there is a clear sign that there is something about this anime that holds on.  Fans of Anime, like me, may better recognize a few of the makers of this series, i.e. Yasuyuki Ueda and Yoshitoshi ABe, from another series, Haibane Renmai.  But enough about that, what about Texhnolyze? 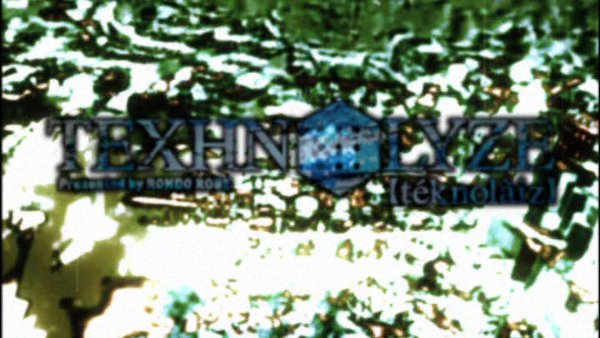 Story:
Taking place in the city of Lux, the series sees the city as a broken down and degrading slum run by factions of gangs.  The higher society look down upon the street people and even have the luxury of getting replacement limbs, should they require it, through Texhnolyzation.  For the most part the story centers on Ichise, a man that’s found his place in the dark, mucky world as a fighter in what the high ups like to call Spectacles, but are really nothing more than bare-knuckle boxing matches.  That’s just where he starts in the series though, as he goes quite a long way.  From fighter, to amputee, Ichise loses his limbs to members of one of the gangs, while being sparred by a higher member.  This is where the first understandings of Ichise as a whole start coming together.  He isn’t a normal guy, an excessively good fighter that never seems to quit, Ichise makes his mark in the world by pretty much laying down justice however he sees fit.

The higher member that spares Ichise is Onishi, one of the top in the organization of the Organo.  Having 2 texhnolyzed legs, Onishi has been able to hear the voice of the city, which has been leading him along and helping him to know what to do.  Clad in a white suit, Onishi is pretty much the one truly good guy in the city, looking out for others and seeking peace however possible with the other gangs.  This is the character that we all want to see win, and for good reason, but interestingly enough Ichise is still the main character.  Both have battles to fight, it’s just Ichise seems to fight and get into more of them. 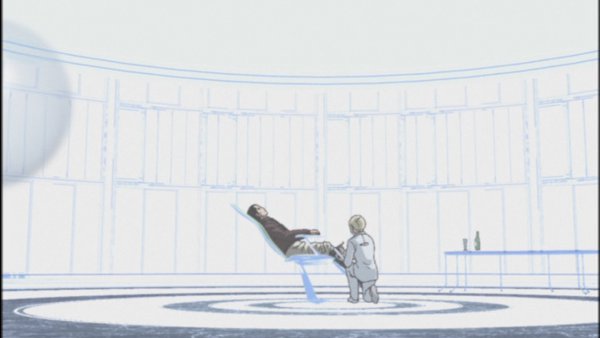 The series as a whole is put together very well, between the 22 episodes is a story told in more or less 2 parts, but connected and over-arching into each other.  The story can be a bit confusing at times, after all the first episode doesn’t have anyone speaking for the first half and Ichise doesn’t speak himself until some episodes later, but it more or less pays off in the end.  The pacing is a little wonky, at some times taking awhile for anything to go anywhere, then suddenly everything’s happening until it calms down.

Dark though is a very big key to the series, no one in the city seems to really care about anyone, but themselves.  This leads to a lot of people uncaring about who they hurt or kill.  Sex seems to be another key, as that seems to happen just about as much as the killing towards the start of the series.  This is a very mature oriented show that doesn’t hold back anything, which is honestly pretty realistic for the world that is shown.  The thing about the show that makes it so hard to talk about is the scope of how much is learned throughout the series.  What starts off with seeming as a simply gang war turns into a much much bigger scale event.  The way the show progresses is pretty great, but don’t get any hopes up for an overly happy ending though.

Visuals:
The visuals are probably the most experimental aspect of the series.  Granted they are from 2003, so the colors are pretty flat, but they are often very interesting to look at or provoke a wondering of why they were chosen.  A good example is when Ichise is becoming an amputee, the pain and drama of the scene is played out very visually than a lot of other anime.  How many times have we seen people lose a limb and act like it is nothing off their back?  This isn’t that.  The visuals play out the anguish, sure people can get limbs back through texhnolyzation, but it is still a very serious matter over all. 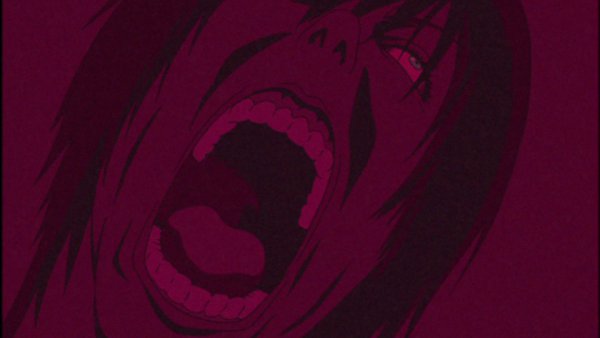 Texhnolyzed limbs themselves are pretty well put together in their own right, which is interesting as one of the makers himself said he had never done anything robotic before.  For the most part they almost perfectly mimic human anatomy from bone layout, to the outer covering.  Though one of the oddest moments comes in the forms of seeing a full CGI texhnolyze arm for all of one scene before getting back to the standard animation for the rest of the series.  Cool to see, but would have had more meaning, if it had had more use perhaps.

Audio:
The music of the series really knows how to kick it off with the opening theme being “Guardian Angel(Xavier’s Edit)” by Juno Reactor, the song itself is pretty upbeat, going against the tone, but does feel right when you’re listening to it.  The concept of a guardian angel itself, is a pretty good fit too.  The closing theme on the other hand fits better with the much slower “Tsuki No Uta” by Gackt fitting in even more themes with the loss and not wanting to lose someone they care about. 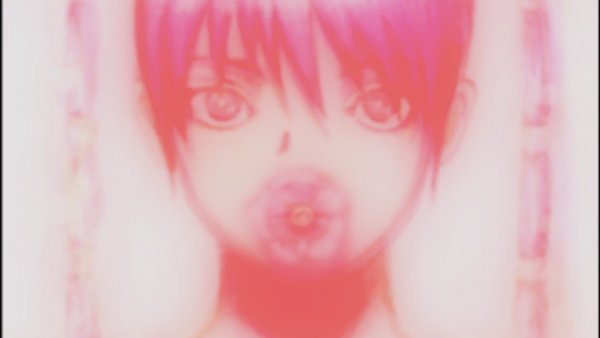 The voice acting in Texnolyze is much different than people might expect just seeing FUNimation, but the series doesn’t have the regulars associated with their english dub as this is an Anime Classic from a bit of time ago.  It’s refreshing to hear voice acting done by actors not heard often or at all before.  Though not the “highlight” in terms of “voice”, as Ichise spends a very good portion of the anime just doing heavy breathing and it’s very different, but not bad as it’s impressive how much the character is actually able to convey in this way.

Extras:
As an Anime Classic the level of extras is fairly thin, but not completely sparse.  While there are no audio commentaries as are very prevalent on other series’, there is still the general fair of trailers for other series and textless opening and closing songs.  In addition to this though are two more interesting extras, one being an interview with the creators Ueda and ABe, and the other a number of alternate dialogues.  The interview is more for those looking to see where the series came from and what the creators were hoping to do with it, which is nice to see as often the original creators are often over looked for the US release of DVDs.  The alternate dialogues are more the opposite, putting lightness and humor into the very dark and depressing series.  Some are a little distasteful, but not in a bad way, though the best are the attempts at making all the violence “kid” friendly, as they can get pretty ridiculous. 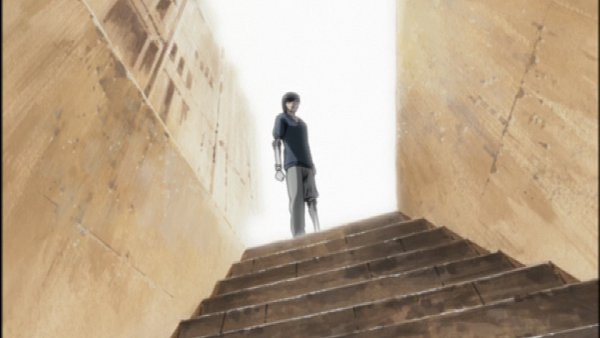 Overall:
Ultimately, Texhnolyze is not going to be something for everyone, but hopefully those interested in darker shows would be willing to give it a chance.  The visuals do a great job at conveying what they need to, and not just what everything looks like.  The audio as well is pretty unique, though the heavy breathing might be a negative for some folks.  This is probably one of the more realistic takes on dystopian and declining society and I give it