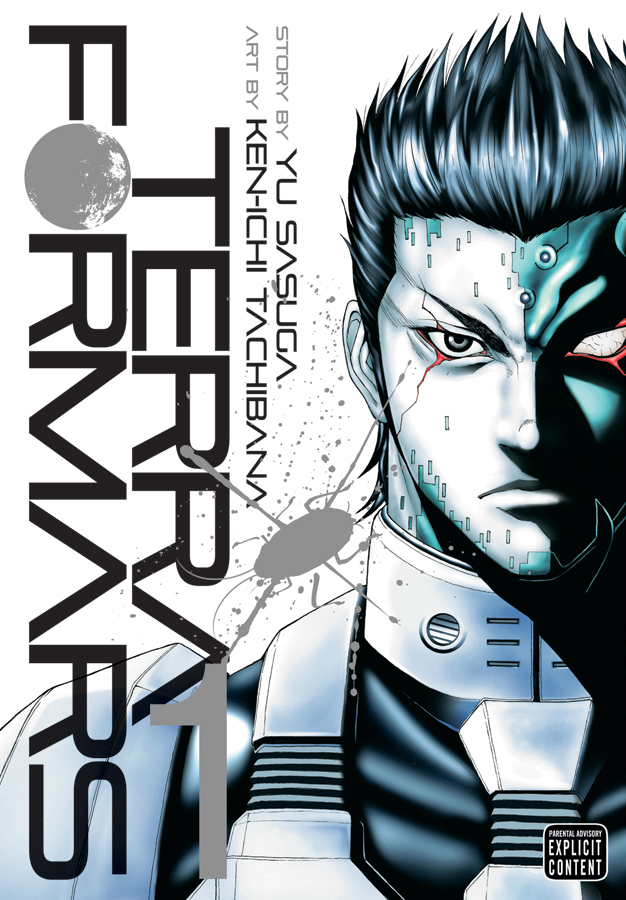 Overview
Wars have been fought over land and resources and the concept of dwindling resources is brought up quite often in the world today. As such the idea that humanity might need to try and create another planet worth living on is a novel but believable concept. Mars is often the planet brought up in these terraforming discussions, and in the case of Yu Sasuga’s Terra Formars, that is indeed still the case. So now that the first volume of this manga has been given an English release, does Terra Formars establish itself well enough to hook readers?

Story
Five hundred years prior to the events that take place in Terra Formars, humanity realized that the Earth would be running into major problems in the future and in an effort to terraform Mars, humanity sent a type of moss that would survive the environment as well as a creature that could barely survive on the planet in an effort to not only warm the planet, but create a simple but effective ecosystem where the creatures would eat the moss and die to be used as fertilizer for the moss.

The creatures chosen for this mission were cockroaches and now that five hundred years have passed and Mars has become a planet covered in moss, mankind sent a manned spacecraft called BUGS 1 to see how things on the planet are and to eliminate any cockroaches still alive so humanity can begin establishing a base on Mars.

Unfortunately when communication is completely lost, a specially outfitted crew is organized for BUGS 2. I say special because the crew members aboard BUGS 2 have all underwent a special procedure with a success rate of less than 40% to provide them with the abilities of various insects in order to survive on the planet’s still less than savory conditions with the use of an injectable drug. The U-NASA team, consisting of these specialized individuals from around the globe, includes Shokichi Komachi from Japan and numerous others.

When the crew lands on Mars, they quickly find that what has happened on the planet is unlike anything science could ever dream up, as the small cockroaches sent to Mars have now evolved into six and a half feet tall muscular Neanderthal creatures that can kill a man with little effort whatsoever, which quickly becomes the case as this extermination mission quickly turns into one of survival as members of the team are eliminated in an instant and even those who try to put up a fight with their insect abilities find themselves struggling against these giant cockroaches.

Through and through Terra Formars is a mature action manga where its ridiculous sounding ideas actually make it a memorable and enjoyable read. The reason for this is not only does the inclusion of insect abilities for the crew create interesting looking transformations, but also because the cockroaches are ridiculously powerful. The action is fast paced and everything happens extremely quickly so readers will find themselves unable to pull away from the manga as the crew fights for survival.

It is also worth noting that, since the crew of BUGS 2 have been augmented with insect abilities, Yu Sasuga spends a few panels giving readers a brief info drop about what makes that insect unique with factual information and how a human might make use of these powers. Not every insect is given this explanation but it is a very nice highlight given how intense the action sequences play out and even how a certain plot tries to unfold.

In this first volume, surprisingly enough, we have a rather contained story following the crew of BUGS 2 as they struggle to survive on the planet and escape meaning that it is entirely possible to enjoy this volume as its own little story but it is pretty clear that there is a lot of ground to cover with a premise such as Terra Formars’ and Volume 1 does an excellent job showing just how powerful and monstrous the cockroaches on Mars truly are.

Artwork
It is worth mentioning that this is a Viz Signature release, meaning that the manga is about an inch taller than your average release, which is good because a lot of the artwork in Terra Formars is incredibly detailed and gruesome looking and this extra space allows for those details to be shown better. Ken-ichi Tachibana has done a great job designing the characters in Terra Formars with clean memorable looking faces that transform into believable looking insectoid faces when the characters use their abilities. The cockroaches themselves are also nicely detailed with a lot of time spent making their simple looking expressions look more scarier than they should simply due to their neanderthal nature and unnatural strength.

I mentioned earlier that characters will die and they do die often and in gruesomely illustrated ways. This includes very detailed looking internal organs being exposed by a character being cut in half or bulging eyes as a head is destroyed. It can also be said that Viz has done a great job with translating the text in this volume without damaging the artwork at all, since there are a number of scenes where text is placed over artwork and it is done so perfectly.

Extra Content
There are only a few tidbits of extra content included in Terra Formars Volume 1 and these come in the form of two pages of brief character bios for the crew of BUGS 2, including their country of origin and their likes and dislikes. The story then closes out with a few pages talking about an old Japanese myth and the origin of staple foods, a teasing statement for the future of the series, and finally ending on a page meant to shock the reader but not be relevant to the story.

Overall
Terra Formars has a strange sounding premise and gives its characters even stranger sounding abilities, but that is actually what makes the series so great in its initial volume. The time readers spend with the cast as they struggle against these insurmountable odds makes for a thrilling read in what I hope will be a sign of things to come as the series progresses. With impressive looking character and transformation designs and plenty of gore to go along with the fast pace that everything unfolds in this first volume, Terra Formars establishes itself as a bloody action story that spends some time delving into factoids and brings with it some emotional moments for the cast before they face off against a deadly humanoid creature simply thought of as a pest in the world today. 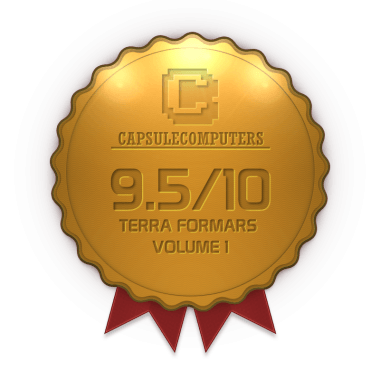