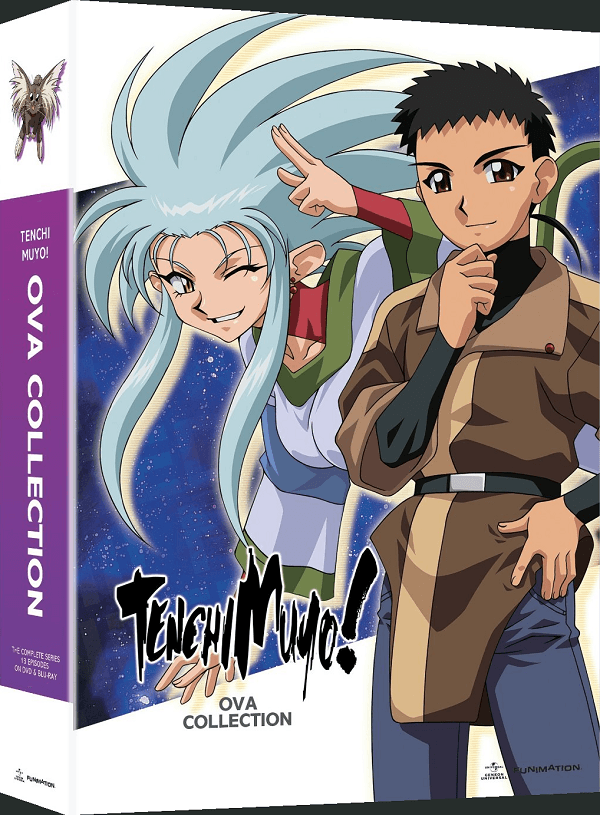 Overview:
There are many series which have paved the way for certain genres of anime to follow in their wake. Many may find that Dragon Ball Z helped set the stage for the wave of shōnen based series that have sprung up since it ended many years ago and for harem anime, it was Tenchi Muyo! that lead the way. Despite the original OVA series found in this release of the Tenchi Muyo! OVA Collection ending nearly twenty years ago, many shows have since taken the harem theme and run with it. However Tenchi Muyo! will forever hold a place in many fans’ hearts, and now that it has been released on Blu-ray for the firs time, is it worth revisiting this classic piece of anime history once more?

Story:
Tenchi Masaki seems like just your average young man who happens to spend time helping his grandfather out at the family shrine. However as Tenchi grows older, his mischievous personality begins to get the better of him and he manages to barely steal the keys from his grandfather after losing spectacularly in combat. Tenchi finds much more than he bargains for when he enters the shrine and learns that the legend of the shrine is more fact than fiction. 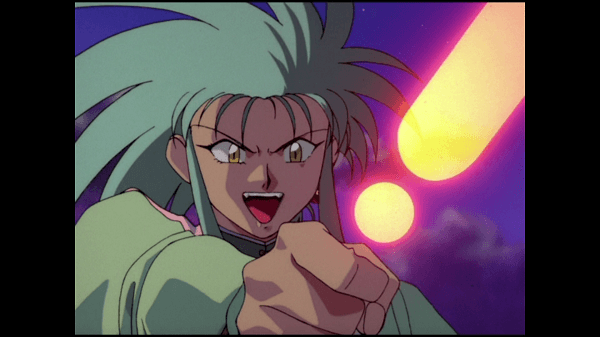 The Masaki shrine was constructed to house a demon of sorts, and when Tenchi manages to release this demon, he finds himself on the run from a powerful space pirate called Ryoko. You see, after she was imprisoned for over seven hundred years in the Shrine, Tenchi is the perfect outlet for her to let out some steam. However when Tenchi manages to defeat her with the help of a powerful sword that was used to contain Ryoko, she still sneaks her way into his life by living at his house.

From there Techi’s life begins to grow even more complicated as more girls from outer space begin to show up at his home in one way or another as the first section of the OVAs devotes itself to Tenchi’s harem growing larger and some minor romantic and plenty of comedic development among the cast until the first actual story arc kicks things off. Despite a few structured story arcs where Tenchi and the girls have to deal with enemies and new plot points are revealed, much of the Tenchi Muyo! OVA series follows your standard harem antics and slice of life. 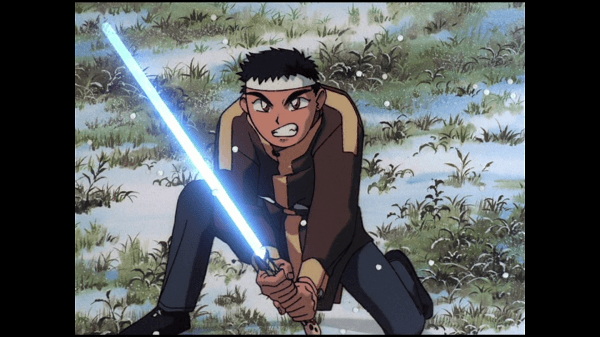 However back while many of those situations may be “standard” now, back when Tenchi Muyo was created the series actually managed to make most of these “tropes” as they call them, popular. Looking back many of these things may seem rudimentary now, but back then Tenchi Muyo!’s clueless main character, cute iconic character Ryo-Ohki and well-rounded female cast with various supernatural powers and character archetypes, set the standard for what many harem genre fans still enjoy today. As such the Tenchi Muyo! OVA series can almost be seen as something as a bit of a history lesson for many Western fans.

For everyone who may not have seen the series before, these viewers will find plenty of hilarious comedy, some nice fight sequences, and even a few plot twists in-store for them as the original thirteen Tenchi OVAs play out. In fact, even returning fans may find themselves surprised by a few of twists they may have forgotten about over the years. 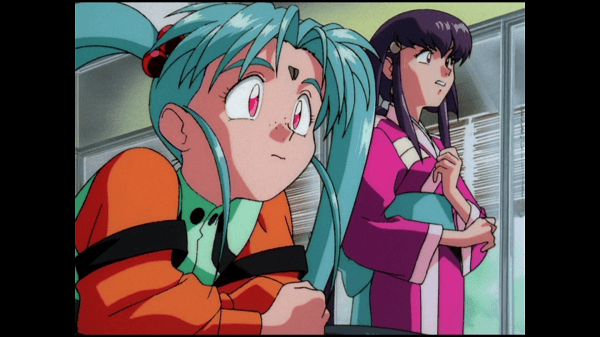 All in all, the Tenchi Muyo! OVA Collection is a great trip down memory lane for fans of the series and a great way to step into the harem genre who hasn’t seen it before. For everyone else, Tenchi Muyo! is still a rather enjoyable series with a number of charming characters each with her own unique personality and even an interesting storyline which is left open for fans to continue in the third part of the OVAs, Tenchi Muyo! Ryo-Ohki. That being said, some may be disappointed at the amount of plot holes left open thanks to the cliffhanger ending leading into the purchase of an entirely different set to see the conclusion.

Visuals:
For many of those who have enjoyed the Tenchi Muyo! OVA series in the past, there has only been one way to do it, and that was on VHS or a few years ago, DVD. However this marks the first time that the series has ever made the jump to Blu-ray and thankfully the transition is almost flawless. However the only reason that this isn’t flawless seems to be due to the age of the series and damage in the form of small dots or lines which appear rarely in the original artwork.

Outside of those issues, Tenchi Muyo! has never looked better than it does on Blu-ray. The colors are all vibrant while the animation is as fluid as it has been in the past with a sharp presentation throughout. In fact, perhaps thanks to the time that passed between the release of these original thirteen episodes, the series’ animation and drawing improves as viewers watch further into the series. 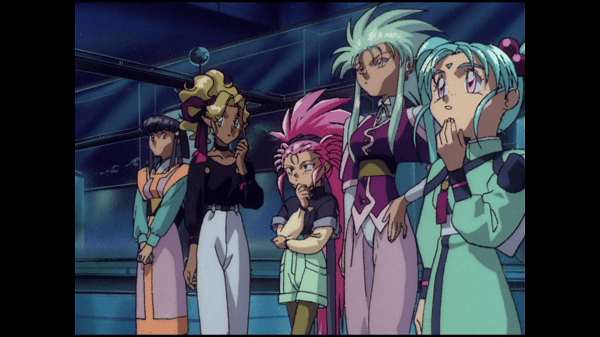 It is worth noting that as this is the Blu-ray release, the series is completely uncensored which means all of the blood and fan service from the original version is retained, which means that there are a decent amount of breast shots throughout the show, though it never put to the forefront or focused on like in many recent ecchi shows. It is also worth noting that the series’ delightfully classic animation techniques, such as overly-exaggerated facial expressions, is perfectly presented and is just as humorous as it was back in the day, even if it is something we rarely see in modern day anime.

Audio:
Fans thankfully have nothing to be  concerned about when it comes to the quality of the English dub and it’s transfer to Blu-ray and DVD and the same can be said for the original Japanese voice track which is also included with the release.. The memorable voice work of the cast has gone unchanged and every character will sound as fans remember them while newcomers will find themselves enjoying how each character’s personality matches perfectly with their voice work. It is worth noting that, the English dub is completely uncut so there may be a few lines of dialogue every so often that may not have appeared in previous versions of the show. 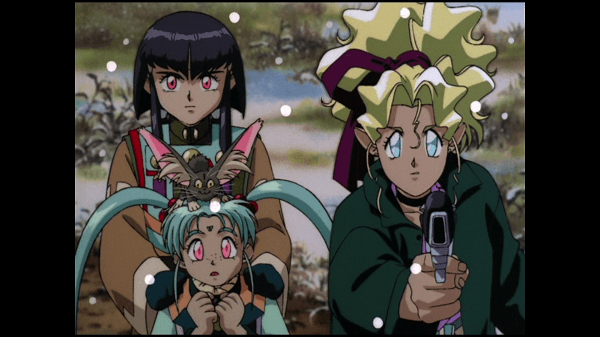 As far as background music goes, the Tecnhi Muyo!: OVA Collection makes use of a number of memorable themes throughout the series, including a certain track played whenever something comedic happens, as well as enjoyable background music which often matches the pace of the show well. It is also worth noting that this release also contains the English versions of the opening and ending songs, such as the second opening “I’m a Pioneer” by Sharyn Scott and the two ending songs, “Talent for Love” also by Sharyn Scott and “The Lonely Moon” by Scottie Haskell.

Extras:
As far as bonus features go, the Tenchi Muyo!: OVA Collection is rather lacking in extras. In fact, the only bonus features this release actually contains are trailers for other FUNimation shows, the US trailer for the show itself, a bonus omake as well as an art book, though the art book was not included with our review copy of the show. 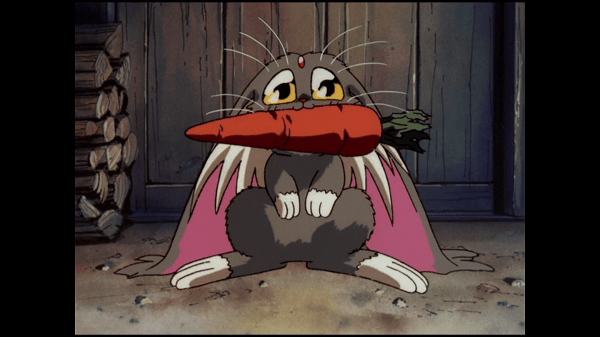 As for the omake, it is seven minutes long and FUNimation has only provided the original Japanese dub. Rather than featuring standard animation, the omake uses stop-motion images, but it is worth noting that there are some interesting plot details which are revealed in this bonus feature that lead into the third part of the OVA series, or as it is known in North America, Tenchi Muyo! Ryo Ohki.

Overall:
As a series, Tenchi Muyo! is delightful and while some may say that this older series has lost it’s shine thanks to the fact that many of the harem tropes that it created have been beaten to death over the years, this trip down memory lane for fans and history lesson for newcomers has never looked better.

With the Tenchi Muyo! OVA Collection now on Blu-ray, a series nearly two decades old looks better than ever before and with only a few small issues thanks to age hold it back from greatness. With a pedigree strong enough to spawn two other anime series, a number of movies and fans still talking about it decades later, there has never been a better time to get hooked on Tenchi than right now.