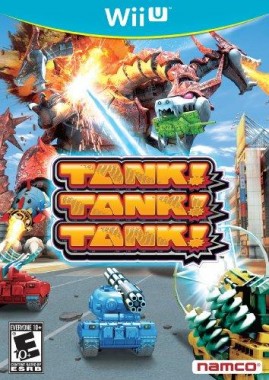 Overview
Tank! Tank! Tank! may have the oddest name out of all of all of the Wii U’s launch titles, but it actually comes from a franchise of sorts with a long, illustrious history, dating back to the 1974 cabinet simply labeled “Tank”. In 1995, Namco brought about Tokyo Wars (acting as a spiritual successor), which changed the gameplay up entirely, letting players take to the streets and blast all enemy vehicles in set number of time. Yeah, the premise was simple, but the game continued it’s legacy nearly 15 years later in arcades, with Tank! Tank! Tank! blowing a hole into the dying genre with new, unique features and a more over-the-top style. The Wii U is certainly a capable system to handle an arcade inspired title, but is Tank! Tank! Tank! right for the Wii U?

Story
Tank! Tank! Tank! came with some awesome advertisements while being promoted, promising nothing but explosions and mass chaos with a lot of camp packed in. The good news is that it delivers fully in those aspects. The bad news is…well, that’s about all it does. There is a small plot intertwined within the main campaign, but it’s nothing memorable or special and feels tacked in just to give a bit of incentive for progression. 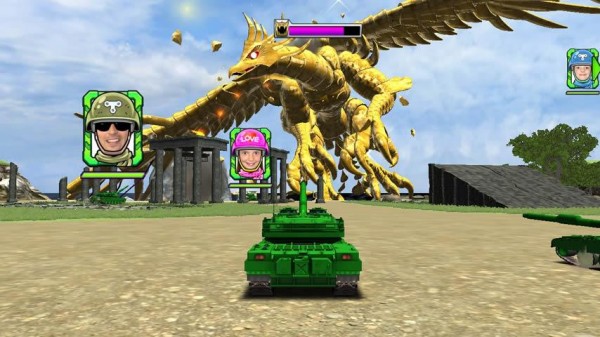 Sure, fighting these robot monstrosities is an amazing concept, but you can only have so many laughs at mecha T-Rexes and Apes before the appeal wears off – leaving the player waiting for that much needed substance. Tank! Tank! Tank! may sell itself as an over-the-top parody, but it lacks the soul to properly pull of all of it’s jest, feeling more like a budget title than the arcade tribute it could have been.

Gameplay
The gameplay in Tank! Tank! Tank! is about what you would expect, with one player taking control of a tank and then going to work against enemies in a decently sized arena. I want to say that there is more aside from movement and shooting with the controls – but this is one simple title that thrives on it’s arcade charms, keeping the experience highly accessible and easy enough to enjoy for any player who picks up a controller to join in. 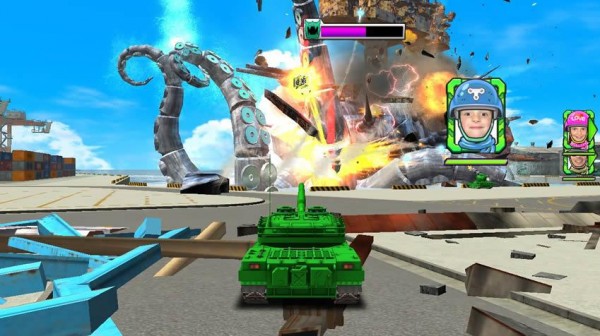 As for the controls, there really isn’t a lot to say. For most modes of the game, the player will be rolling around in their tank using the Gamepad, and shooting with any of the main face buttons. Since the standard shot offers unlimited rounds, the player will need to upgrade by rolling over weapon drops as they patrol the area. These weapons include the likes of machine guns, missiles, and large blasts, offering a little variety in an otherwise repetitive experience. The touchscreen offers little more than an extra display for single player, which is a bit of a loss – but nothing too major due to simplicity of the gameplay mechanics. For multiplayer, other Tank pilots can utilize the Pro controller or the Wiimotes for control, and considering there is no difference between any of these three methods – no participant should feel a loss as every control scheme feels relatively the same. Yes, this is a fluid game and is easy to learn, but the fact that there is so little needed from the player kills a lot of potential challenge and makes the entire game a button mashing romp, where the only strategy required is to shoot, shoot, shoot. 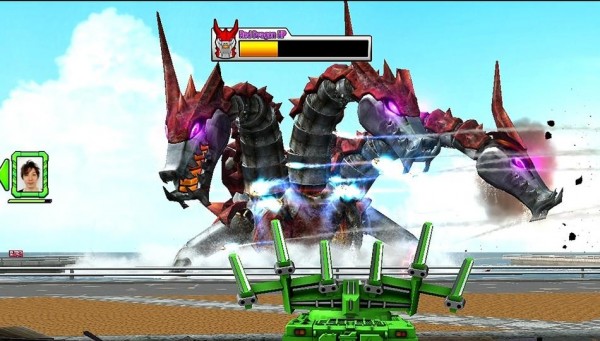 Campaign mode is the main single player draw, offering up missions to take down all enemies on the screen that are usually followed by one big boss shortly afterwards. As stages are cleared, medals are rewarded to the player which unlock new tanks. Once missions are completed using the separate vehicles, more medals are earned and the player can continue on their way. It sounds solid enough, but even a layout as simple as this comes off as a complete chore. Due to the way medals are unlocked, you will be playing through many of the same stages more than once to get enough to progress forward. After a new stage is unlocked, tougher enemies arise to attempt to kill off the tedious journey and reward the player for their success. Sadly, the latter portions of the game feel unfinished, featuring mere color swaps for robots and the same blasting gameplay that most will already be tired of. I know, arcade games are repetitive, that is just in their nature. To attempt to pad the length of the game with such minor changes is borderline insulting however, and makes the single player experience a lot duller than it should be. 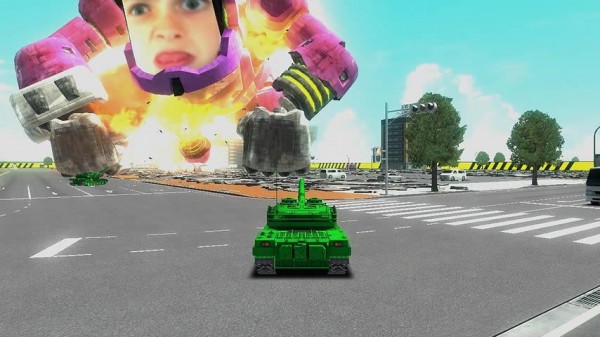 Multiplayer is a lot more fun, even with the same mechanics in tow. A full co-op mode is featured among 3 other modes, allowing for players to team up or go head to head in a light amount frantic – yet enjoyable battles. None of the multiplayer options tread too far way from the core game, but the one that dares to take us away from the boom of our tanks is the highlight of the entire experience due to it’s chaotic and over-the-top antics. My Kong allows the player with the Gamepad to take on the role as a giant robotic ape as three other players attempt to destroy the beast with the power-ups provided. This Kong has some massive abilities that are drenched in goofy humor, and when you are with a decent group of friends, there is a lot of challenge and entertainment to be had in this offbeat mode alone. Is it worth the entire price of admission or make up for the small amount of content? Not really. It does however deliver enough laughs and action to warrant a playthrough though, while standing miles above everything else that is offered in the main game.

Visuals and Audio
Tank! Tank! Tank! may be a bit lacking, but it’s still a beautiful game to look at. This insane world is one that is bursting with color and style, letting the player feel like they are in a recreation of a Dr. Seuss book directed by Michael Bay. Players are also able to customize their pilot with their own picture and frame, adding a bit more character to the overall experience, and seeing the default AI’s photos can be an entertaining sight in it’s own right due to the down right absurd photos used (ever get blasted by a kitten?). 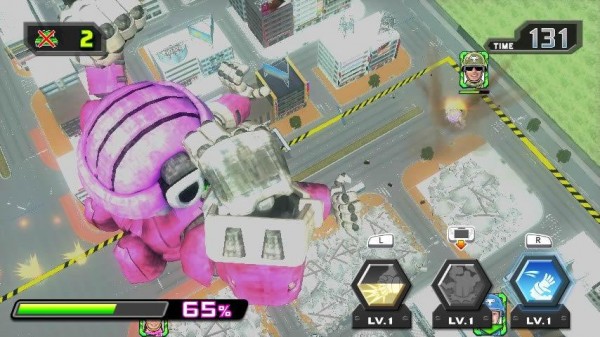 The soundtrack is decent enough, driving the blast-based combat with tunes to get players rolling on the battlefield while a crazy commentator calls the action. The dialogue itself is a bit much at times but mostly humorous – only coming off as a tad annoying when the same lines are used too many times during a match. Of course the tanks sound decent as well, and luckily, no one should feel as their shots are ineffective as the sound clips used are sure to grant some instant gratification as you see that one particular enemy explode.

Overall
Tank! Tank! Tank! is a great multiplayer game with a so-so campaign that pads itself in length to appear like a bigger product overall. The problem is, padding is something we see in budget titles and Tank! Tank! Tank! tries to carry itself as anything but. Sure, you will get some laughs and the charm is there from time to time, but after that novelty wears off – you are left with what feels like a game that should have been released on the eShop at a much lower price. I know this “franchise” of sorts isn’t exactly legendary, but Tank! Tank! Tank! feels as if it deserved more and settled for less. If you are needing something to entertain friends, this title will do it’s job as it’s an ok party game that anyone can pick up and play. Unfortunately, there still isn’t enough content or substance within Tank! Tank! Tank! to grab it before a much needed price drop takes place.