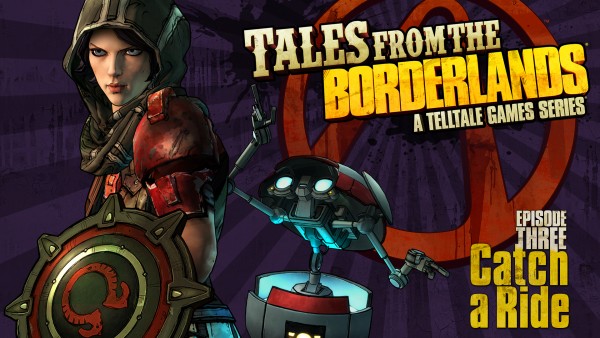 Overview
Telltale Games has recently created a reputation for crafting memorable experiences with properties that gamers are already likely familiar with. Still… the concept of a Borderlands game in Telltale form seemed strange when first announced but so far the company has managed to prove themselves by creating great moments throughout the course of the first two episodes of Tales from the Borderlands. So now that the third episode in the series, Tales from the Borderlands: Catch a Ride, has been released have they been able to keep that same level of quality?

Story
As should be expected, this review may contain spoilers concerning certain story elements from past episodes of Tales from the Borderlands so those who have not yet finished Atlus Mugged should do so before continuing. Now that that is out of the way, Tales from the Borderlands: Catch a Ride drops players right where things left off, in a massive cliffhanger that saw players choosing to either have Rhys trust his con artist partner Fiona or give the disembodied Handsome Jack that has taken up residence in his head a chance to take things for a spin. 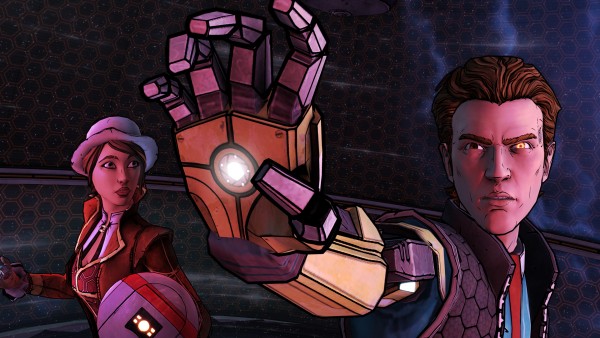 I must say that I was pleasantly surprised with his opening segment since there are many immediate differences in the way things play out in Catch a Ride depending on what you choose and some of these result in a few things that will be different throughout most of the episode, creating a long enough lasting change to actually make playing through the episode more than once worthwhile, an aspect that has often only shown how weak a player’s choices tend to be. It is worth noting though that at least by the end of the episode however most things have still settled back down into the standard formula so don’t worry too much about it if you don’t feel like going through the episode twice.

Anyways, after dealing with a new threat that originally set up the Vault key deal that went sour at the beginning of the game and acquiring the Gortys Project, the group discovers that the orb is actually a robot, a robot that happens to be adorable in almost every way from its naivety, to its interactions with Loader Bot, to its cute design. Gortys was designed to lead those who found her to a particular Vault, however it is missing at least one part (and likely more) that Rhys, Fiona, and the rest will have to track down. 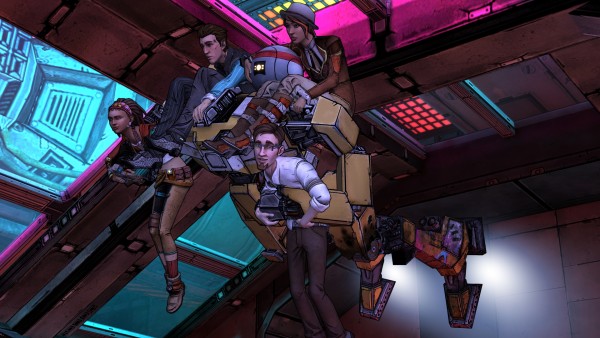 Doing so leads them to a strange Atlas facility where they must once again split up and try to deactivate the automated defense system while also retrieving the upgrade as quickly as possible due to the amount of people on their tale. As Fiona and Rhys briefly separate we see Fiona undergo quite a bit of character development as she learns how to take care of herself and use her knowledge to take on an enemy, especially since she now has an unlocked weapon that will be discussed later, while Rhys continues to deal with Handsome Jack and also try and get close with another character in the group.

Of course this all eventually leads to a spectacularly explosive finale full of ridiculous action sequences that live up to the Borderlands name with characters clambering on dangerous fast moving vehicles, getting into fights while tied upside down, and more. It even features a few more guest appearances from familiar faces as two members from the original Borderlands appear in a fashion that, despite seeming out of character, is actually fitting considering who they are after and the way that it ends up establishing the beginning of Borderlands: The Pre-Sequel. 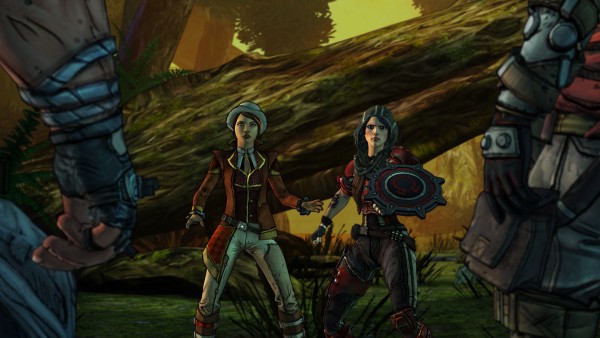 The choices made throughout Catch a Ride seem to have far less consequence than the previous episode though this doesn’t mean that they won’t play a factor once the series returns with the next episode, especially since this one ends with yet another cliffhanger that leaves the group in an even worse predicament than they were in last time.

Gameplay
Following recent Telltale Games’ fashion, players will be spending most of their time watching characters talk while making a few dialogue decisions here and there while also taking part in quick time events to try and avoid a gory death. These sequences remain incredibly simplistic though it is worth noting that each character’s “abilities” are given some upgrades this time around.

An unlikely ally unlocks Fiona’s elemental wrist-mounted pistol and supplies her with a large amount of ammo for the gun, which makes her more capable in a fight but does ruin the aspect of forcing players to be selective of when to shoot and what element to use. It is also worth noting that Fiona’s money looting ways are still as prominent as ever and during a moment in Catch a Ride players can utilize an appearance changing machine that can give Fiona a complete outfit change, change Sasha or Vaughn’s glasses, or change the paint job on Loader Bot or Rhys’ arm for a price. 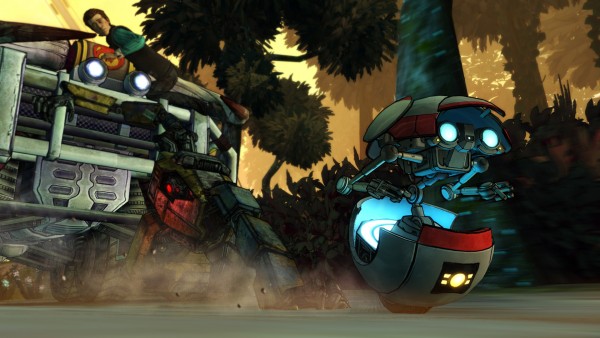 As for Rhys, depending on the player’s decision his Echo Eye will become even more corrupted as now Handsome Jack will be creating his own descriptions of things and people that can be scanned. This creates quite a few funny moments, especially if you happen to like his brand of humor.

Visuals & Audio
The Borderlands aesthetic continues to work well with Telltale’s own style as the episode continues to be pleasing to look at with no noticeable issues this time around. There are plenty of fast paced action sequences that occur in the latter half of the episode and, depending on choice, the beginning of the episode as well. It is worth noting that, as mentioned earlier, character outfits can be changed depending on how much money the player is carrying around which does offer some variation though it will be interesting to see how long these outfits will stay changed. 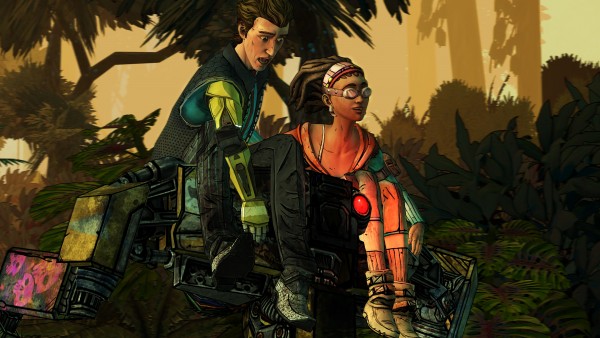 As far as the voice track goes, the returning cast continues to perform their roles admirably while the adorable sounding Gortys is voiced by a very familiar voice actress who brings out the best in the little robot. The soundtrack found in Catch a Ride continues to be impressive with catchy tunes used during an early montage and during the credit sequence.

Overall
If Tales from the Borderlands continues to be as impressive as the past two episodes have been and Catch a Ride is, then the complete series will rank among the best they have produced so far. With plenty of hilarious moments and sharp writing, Catch a Ride introduces a few new characters while developing the current cast and moving the story along at a pace that leaves gamers wanting more by the time the credits role.