Symphony is a music driven vertical shooter in the similar vein of indie darlings Audio Surf and Beat Hazard. Like these games, Symphony uses the user imported tracks to create unique levels. Symphony also adds RPG styled items and upgrade system, creating unique items with each song that can be equipped on player ships. Is this enough to set Symphony apart from its predecessors?

I personally found the plot a little thin. Although the story is not the star of the show by any means, I found myself longing for more explanation. The evil entity mocks me, taunts me, and even bargains with me; however I am left wishing for more. On one hand, the fact a game of this genre actually includes a story is impressive, especially since the plot makes great use of the whole use your own music deal. However, in the end it the plot feels like a last minute afterthought that deserves to be more fleshed out. 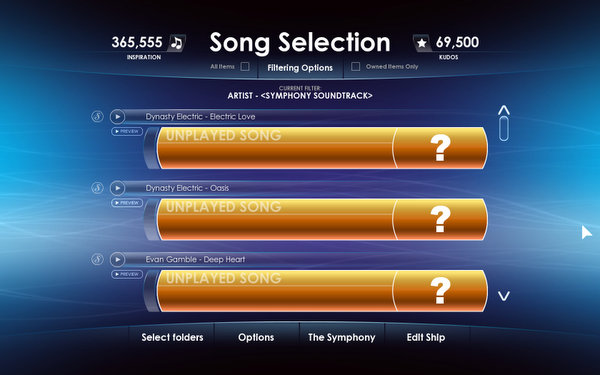 Symphony is a vertical shooter that has taken inspiration from such games as Rez, Children of Eden, and 1942. Players can either choose music from the healthy sized Symphony soundtrack or provide their own music. I was caught off guard as there was no options section in the first main screen of the game. To reach the options, players need to start a new game, scan their music files before they can access the games options. I found this was a little strange. The first thing the game does is to scan the computer for audio files and quickly creates a library. I did not have to set anything up, although there are options that can be accessed later to tweak and adjust the folders scanned. Considering the hefty music library I keep on my computer, this process was done quickly. I soon discovered upon loading up the game that the actual analysis of the track is done before a track is played, although this adds a few second pause before a level is loaded, this cuts down on the initial load time. There are two main filters and two sub-filters. First of all, it is possible to view every single song in the library. For those with larger music libraries will quickly want to switch to either the “Filter by Artist” or “Filter by Album” section to chop down the list to a more manageable size. One filter I wish was added was a “Filter by Album Artist” as I found filtering only by artist meant songs featuring another artist in the Artist tag would be separated from the rest of the songs by that artist. In addition to filtering by Album and Artist, players are able to filter by All items and Owned Items. The All Items filter shows all items discovered by completing a song’s level and Owned Items shows all the items purchased.

Once a song is selected, the game will analyze the track momentarily and generate a unique level. The game is broken down into three colour coded states. Blue state represents a lull in the song, purple state represents the transition between the lull and the crescendo, and red state represents the most intense portions of a song. Enemy movements, aggression, and spawn levels rise and fall according to the state of the music. 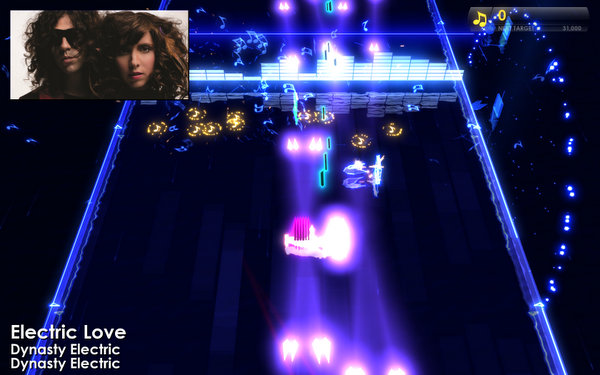 Symphony has six difficulty levels, ranging from “Pianissimo” or very soft to “Fortissimo” to very strong. In the beginning, only Pianissimo will be unlocked, but as pages of the Symphony of Souls are rescued, more difficulties will be unlocked. The difficulty ramps up extremely well. Consistently reaching all goals for one difficulty level means reaching the first goal for the next highest difficulty level should provide a mild challenge for the most part.  As the game progresses, new mini bosses are introduced, each with their own behaviours.  The variety of mini bosses provides much appreciated variety in Symphony. The Demons that serve as level bosses have a variety of behaviours too. You will fight each demon type three times in a row before a different, more challenging variant appears. Having a Demon spawn in the level will cause the final score to not count towards the leaderboard, but in return the level will provide almost an additional 100,000 Inspiration for the level.

The in game currency for Symphony is Inspiration and Kudos. Inspiration is earned from the scored achieved in a level. Kudos however is a set reward based on reaching two possible milestones in a level set out by the difficulty of the level. The higher the difficulty, the more Kudos earned. To unlock a weapon usually ranges around 70,000 Inspiration. Upgrades will require a set amount of Kudos and Inspiration to purchase. Each song unlocks an item. The player’s ship has four weapon slots that can be equipped. Although I had the impression each item would be 100 percent randomly generated in the vein of Diablo, it turns out each level provides a random weapon. Most of the time, they will be exactly the same as similar named weapons, however, once in a while a rare item will drop that will have a marked visual difference and a power buff. Although there are a large variety of weapons and items that can be found in Symphony, I did not appreciate finding the exact same Shotgun  for the thirtieth time after pouring hours into the game. 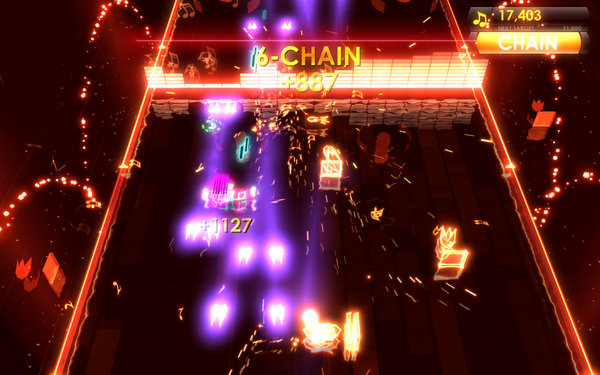 The controls are incredibly well thought out in Symphony. Weapons can be set to auto fire constantly, toggled by clicking either the left of right mouse button to auto fire, or can be fired by pressing and holding one of the mouse buttons. Some weapons are best saved to be shot at the correct time while others are best spammed. This control scheme makes incredible amount of sense. Symphony is an incredibly well polished and tightly balanced gameplay experience.

Symphony is a beautiful game that takes great inspiration from Rez, Child of Eden, and Geometry Wars. A game in full swing is a beautiful example of frantic chaos in action. The game runs extremely smoothly with no visual hiccups, frame drops, or slowdowns. The enemies have varied looks that can be quickly identified. I appreciated the colour coded system to represent the intensity of the music. However my only gripe is the fact missiles are depicted as a reddish orange colour. Once the action hits the red phase, I found it extremely difficult to spot the incoming missiles. I would prefer to see the missiles set to a different and more obvious colour. Overall, Symphony is an incredible visual experience that fuses well with the music.

Symphony ships with a strong soundtrack of the top indie artists in a variety of genres in addition to providing the opportunity to add your own music. The library of sound effects for weapons firing, ships exploding, demons talking, music being tweaked is extensive. There are also very generous settings to tweak the balance of sound effects and music in Symphony. I personally found the default setting of “+30 sound effects” to heavily overpower the music and eventually found my happy balance at “+30 percent music”. Symphony’s audio quality is spot on and does not fail to impress. 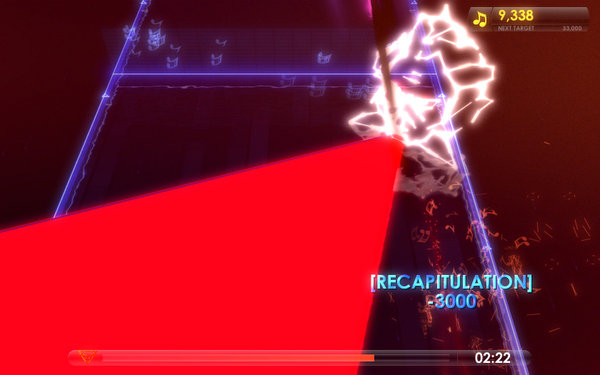 Symphony’s retail release is an incredible game. It is little wonder why it impressed the judges at the Indie Game Challenge. The game is perfectly balanced in its difficulty and its fusion of an audio/visual experience. There are some minor gripes that include a story that feels like an afterthought and a need for a more obvious coloured missile. However, it is an absolute pleasure to lean back and watch Symphony in action. Watching enemies move in the beat of the music and follow the intensity of the music is an absolute pleasure. For $9.99, Symphony is priced spot on and a must buy for any fan of music or vertical shooters.