Swap This! for the iPhone is a puzzle game which has you organising stacks of frozen fish (trapped in a surrounding cube of ice) into groups of at least four in order to free them. To call the concept eccentric would probably be a bit of an understatement, and when you take into account that one of the modes known as ‘Fish Fight’ has you launching these newly liberated critters at another larger, more threatening fish to prevent it from reaching the surface of the water, it really does sound a little bit crazy. And while the idea behind it acts only as an excuse to stack these multi-coloured creatures into organised arrangements, it is the game’s simplicity that will really win you over. Although it can offer more depth through power-ups, obstacles that get in your way in an attempt to hinder your mix and matching, and an ever-increasing level of difficulty that gets truly challenging very quickly. 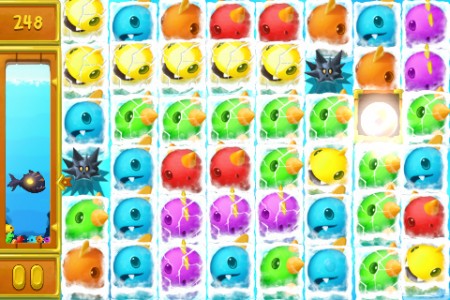 It seems the only instruction needed to play this game is the title itself: Swap This! The controls are straight-forward, allowing anyone to play. It is simply an intuitive system where you touch one tile to select it (and touch it again if you want to deselect it), and following on from that touch the tile you want to swap it with and the game does the rest. There’s no dragging or sliding involved, just quick flourishes of the fingertips that make for a clean switching system. Soon you learn to do this at speed and develop skills for more in-game techniques to create longer chains or simultaneous chains, both of which come with nifty score bonuses. Some unlockable power-ups aid you in clearing the board and getting combos, and enemies which block off parts of the game board also add some variety to the game. 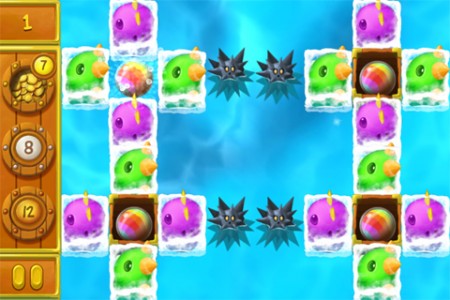 Variety also comes through the choice of three different game modes, each providing slight variations on the Swap This! formula. The first, Fish Fight, which I have already mentioned, is arguably the main game mode. Your aim in this mode is to create the groups of the same coloured fish, which are then used to whack a large, sinister-looking fish down to the depths of the ocean. This motive is represented along the side of the screen with the enemy fish and the ocean visualised in a meter, monitoring it as it creeps up the screen with each attack pushing him further down. Creating larger chains and bigger combos is more effective and will push the enemy fish down further, whereas smaller groupings won’t help to push it down very much at all. There is even videos at the end of each round which change depending on whether you win or lose, portraying your little guys fighting of the large fish or being eaten by it depending on the outcome. Most will find this mode to be the most addictive of them all, as you will keep wanting to see if you can pass through rounds faster and faster each time, and seeing if you can progress past the fish that got you last time round.

The other two modes are ‘Minute Match’ and ‘Puzzles’, with the contents of each being explained quite nicely by their titles. As you would expect from a name like that, Minute Match is a test of speed, giving you a minute to get as higher score as possible. While most of your time will probably go into the other two modes, this one is ideal for short bursts of play when out and about, and also is the mode that makes best use of the Facebook and Twitter support. Although the whole game is high score-based, it is this mode that will bring out the most competition with friends, especially when social network support is utilised. 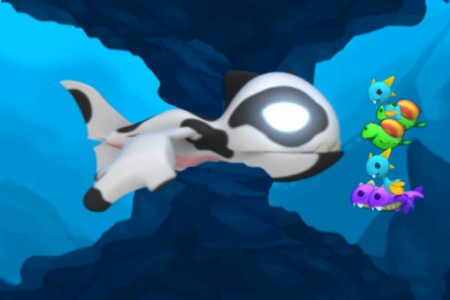 The final play mode is Puzzles, which provides a more methodical approach to playing the game, ousting the frantic tapping of the other modes for a more slow and steady play style. It does this through removing any time constraints and simply giving you a range of different circumstances with the sole aim being to match everything up in the fewest moves possible. There are three modes to play through -easy, medium and hard- with targets within each puzzle, offering replay value to go back and get all gold medals. Unfortunately, you are forced to play through the insultingly easy first lot of puzzles before you can unlock the others, but as with the rest of the game, it quickly becomes surprisingly tricky in places.

Overall, Swap This! is an excellent puzzler, that’s suitable for all ages. It has been crafted to hold appeal amongst youngsters with it’s cutesy graphical style, but quickly becomes devilishly difficult and can pose a challenge to the most seasoned of gamers. But it’s not all frantic fingers either: the Puzzles mode gives the option of a more thoughtful approach to the game, and some of the harder enigmas really do require a lot of logic. The game’s addictive simplicity makes it an absolute winner, and for the tiny asking price, you can’t really go wrong.