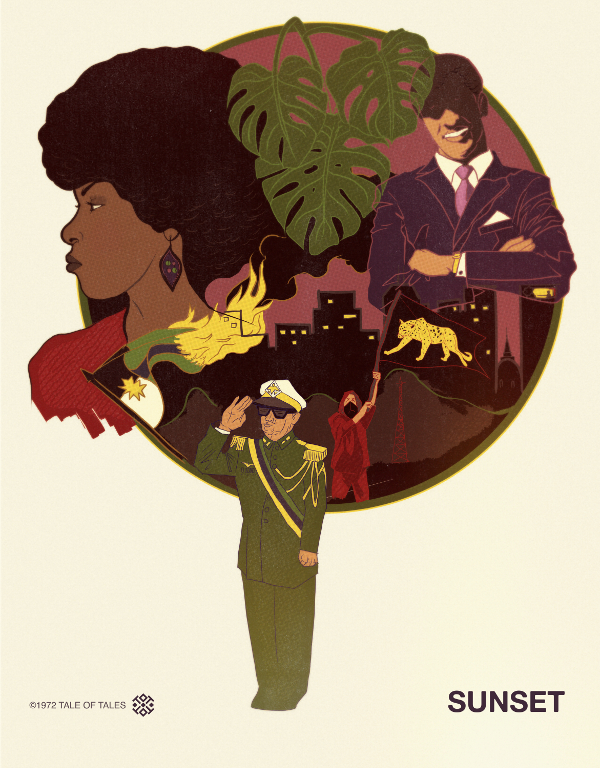 There have been many, many, many games of, about, and taking place within war. Games in which players mimic soldiers on the front line, generals commanding their troops from afar, snipers specializing in taking out “high-value targets” from long distances, and even mercenaries. Not to mention all the outside the proverbial box (though, not really) protagonists in the space marine, mech pilot, Jedis, and so on. And sure, as the opening to games in the Fallout series go, “war never changes”. But have video games forgotten those the wars affect other than the ones fighting them? Other than the few times seen running away in fear, when do we ever get a look at the effects war has on the citizens in that region? What about the people these wars – fictional or otherwise – are being fought for? In the grand scheme of interactive entertainment, why are these people forgotten in anything outside the scope of an escort mission? Well, Tale of Tales’ Sunset opts to explore the side of war we never experience as players.

Sunset is a first-person exploration and simulation game from Auriea Harvey and Michaël Samyn, the two-person team that is game development studio Tale of Tales, that examines war from the perspective of an observer. And while this game doesn’t put you in the action, it may be one of the best examinations of war outside of a Ken Burns documentary. 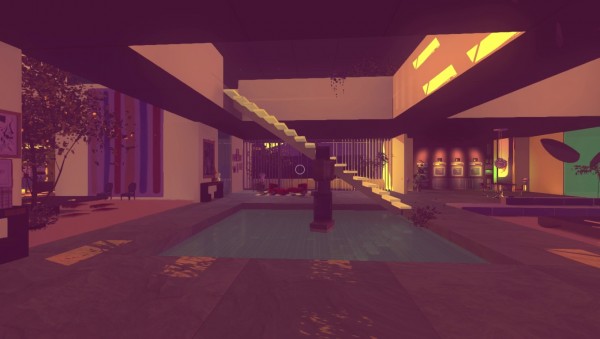 In Sunset, you play Angela Burnes, an African-American ex-patriot living in the fictional Central American country of Anchuria in 1972. Each day, just an hour before sunset, Angela cleans the penthouse of Señor Gabriel Ortega – a wealthy art historian who is trying to save as many pieces of art that he can – while he is away. Outside the apartment, Anchuria is in the midst of a civil war where a military general has seized control of the country and rebels are fighting in the streets for the freedom of Anchuria. But Angela is not one of these rebels. Everyday, Angela has one hour to clean, cook in, organize Señor Ortega’s swanky new penthouse apartment. In doing that, Angela ends up playing a much larger role within the geopolitical climate just outside the doors.

Sunset is an exploration game where Angela’s actions within Ortega’s penthouse can influence the tides of war by influencing Ortega. Each day, you are left a list of tasks to finish before you leave. More often than not, the tasks left do not require the full hour before sunset for you to finish. In this time, the player can do a few little things here and there that get the attention of Ortega. Spend a bit more time on a task to make the result a bit more artistic or visually pleasing, organize his furniture, unpack a few boxes that you are not required to unpack, hide a few private files for him to make sure he is not arrested if the military enters his home, and so on. From performing these tasks, you end up learning more about Gabriel Ortega and his life on the outside as well as more about the civil unrest that is nearly decimating your adopted country. If you do enough, Ortega may start leaving behind little notes for you to read and respond. 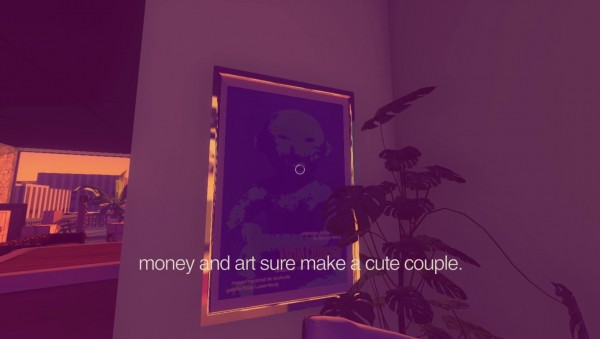 Your gameplay is what drives the story forward. You can just stick to your tasks, or ignore them altogether, and your game will be over within ninety minutes; you will never meet Señor Ortega and the country will continue to sink into a brutal civil war. But, if you take an interest in all that is around you in the apartment, you will discover so much more about both Angela and Ortega. The best way to experience Sunset is to take one’s time and learn as much as you can. If you play your cards right, Angela and Gabriel grow closer despite never actually meeting in-person. And when Angela’s brother – David – becomes a rebel leader and is fighting to release the country from the general’s grip, Ortega may also begin working alongside the rebel cause. Every choice Angela makes within the penthouse has the potential to cause a ripple effect that can turn the tide of the war in either favor.

When you read and hear of David’s exploits on the ground during the war, you realize something: David is the character you would be playing if Sunset were the typical first-person war shooter. The brazen rebel leader who is willing to die to save his country from the hands of an evil ruler. We have all played that game. What’s worse is that we will all most likely end up playing that game again. But Sunset is not that game. Angela isn’t the rebel fighter, the heroic marine, or the mercenary with a heart of gold. Angela is everyone else. Angela, quite frankly, is us; the ones who work are menial jobs, sleep in little apartments, go out with our friends on weekends, and live our lives in the background of greatness. What makes Sunset stand out from these other games so much is the simple feeling that it is all okay. Even the person who isn’t the typical dude on the cover of the new Call of Duty game can make a significant difference in that world. And in the case of Sunset, maybe even more so. 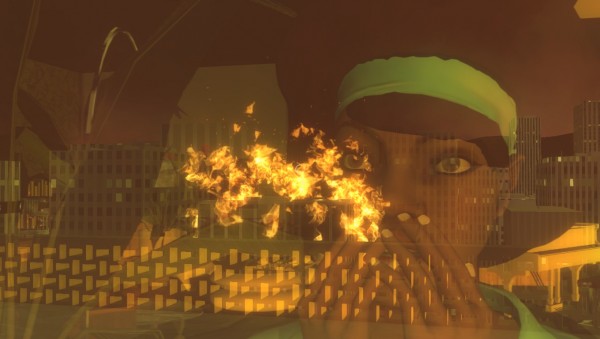 It may seem a rather obvious statement to make given the images here, but Sunset is a visually gorgeous game. Because the game always takes place in the hour before the sun sets under Anchuria, the penthouse always basks in a beautifully-rendered warm color palette. And because it is an exploration game, Tale of Tales took the time to add in many small details around the apartment that help seep the player into the early-’70s world of Anchuria. Beautiful artwork, magazine and book covers, exotic plant life, and articles on the war in Anchuria fill the penthouse each day and each individual piece help secure you in the world of Sunset.

The soundtrack is done by none other than Austin Wintory, who has worked on games like Journey, Monaco, and The Banner Saga. As always, Wintory’s tracks can’t help but immerse you into that early-’70s vibe of Sunset. His music alone is a reason to jump into Sunset. The voice work and ambient sounds are also brilliantly done throughout. 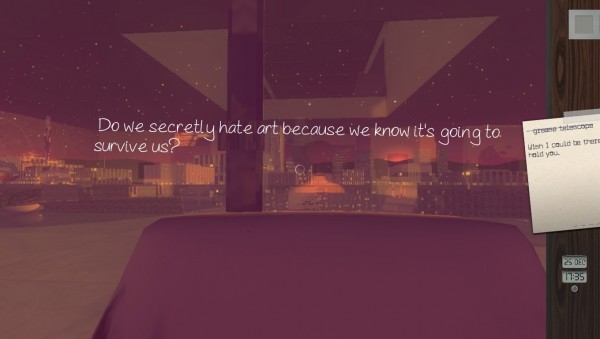 Sunset is a quiet examination of the many factors that lead to a country in turmoil: differences in socioeconomics, geopolitics, the values of art and humanity, and so much more. Themes that are still a driving influence in today’s political climate. But what Sunset truly is, more than anything else, is an examination of the two most destructive and influential elements in humanity. The only two elements that can change the world: love and war.

In the end, we may not know which can be a greater force of change on this blue rock in space which we all inhabit, but we all know that it is our actions in both that will either bring us all together or drive us all apart.