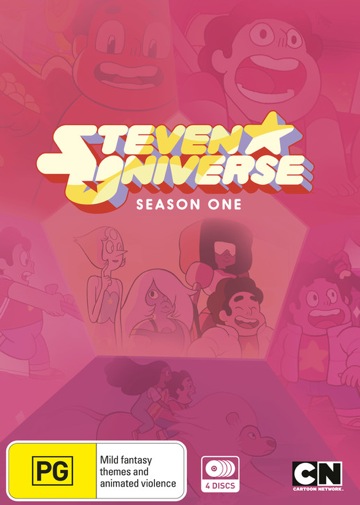 Steven Universe is half-human and half-gem. He lives with the Crystal Gems, a trio of humanoid Gems that now live on Earth permanently following a war between the Gems’ home planet and Earth. The trio is comprised of Garnet, Amethyst and Pearl. Garnet prefers solitude and possesses the ability to predict the best course of action to take in every situation. She is often the most supportive of Steven and his ideas. Amethyst is characterised as a free spirit, and in some ways is similar to Steven’s father, Greg. She can be patronising towards Steven, but occasionally struggles to deal with her past and the way in which others perceive her and treat her. Pearl possesses the most common sense out of the Gems, but often believes that Steven is too young to join them on their missions. Together, the four of them complete dangerous missions with strength, wisdom and the use of household items. 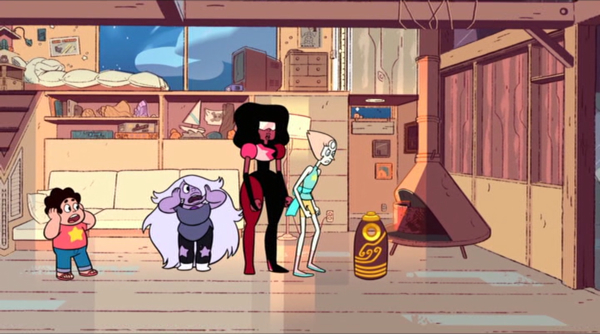 Steven Universe has a fun feel to it. Steven’s energy and characterisation contribute to this, but there are so many elements that make this series what it is. Many episodes follow the same formula, but nothing ever gets old in this series. Said formula can be summarised as follows: Steven goes out on a mission with the Crystal Gems, Pearl worries about him, he gets into trouble, the Gems save him and he may or may not contribute to the success of the mission. As has been demonstrated by many anime series, it is not about the formula a series follows but rather how it is used. This is where the members of the creative team show off their skills. Many episodes are, possibly intentionally, reminiscent of adventure video games such as The Legend of Zelda. Steven is made to think outside of the box to solve a puzzle on multiple occasions, much like a video game player would. The solutions may seem obvious once they have been revealed, but it is always fun watching Steven trying to figure out the solution while simultaneously trying to work it out with him.

The plot of each episode tends to be predictable at first, especially with any plot point involving Steven, but the plots become progressively complex and surprising as the series progresses. All characters are created for a reason, even the bizarre and annoying Onion, but the characterisation of Connie in particular adds an extraordinary level of depth to the series. Although she is introduced in the opening animation sequence of the first episode, Connie does not appear until several episodes later. She and Steven become friends by the end of her introductory episode, and it is in every episode that she appears that the plot is truly special, meaningful and unpredictable. She is used to explore the themes of loneliness and social anxiety to great effect. Steven Universe is one of the best series to happen to the world of western animation; Connie is one of the best characters to happen to western fiction. 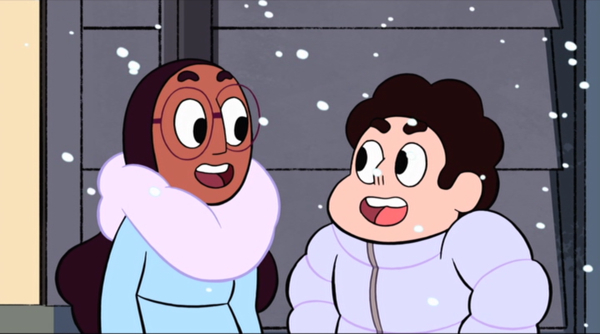 Humour is a fundamental part of most Cartoon Network shows, but aside from Adventure Time, rarely do they contain such clever humour as this one does. There are jokes for people of all ages, something that used to be rare in CN’s productions. Garnet in particular gets some of the most hilarious dialogue; her characterisation and Estelle’s delivery of her lines make the series that much funnier. The other aspects of the writing also demonstrate the accessibility of this series to wider audiences. There are references to forum debates about anime, unpopular blogs and, more importantly, to one of the major problems with the rock music industry. Western series tend to focus on male protagonists, but all female characters are given active roles in this series. Traditional gender roles and attitudes are not portrayed here, and Steven’s father Greg Universe, who used to travel and perform at rock concerts, illustrates this simply but powerfully when he tells his manager that “women are people”. This series does not marginalise any group of people, and it even, albeit subtly, promotes LGBTI themes through the fusion of the gems.

The animation is above average for a Cartoon Network series. It has the same feel that other CN series do in terms of the animation style, but shots are often more detailed than in other CN series. The character designs are unique and pleasant to look at, showing that a lot of effort has been put into the visual aspects of this series. It is clear throughout the season that the production team are fans of Japanese media, and this can be seen through depictions of figurines of iconic characters from Japanese series, such as Cloud Strife from Final Fantasy VII. 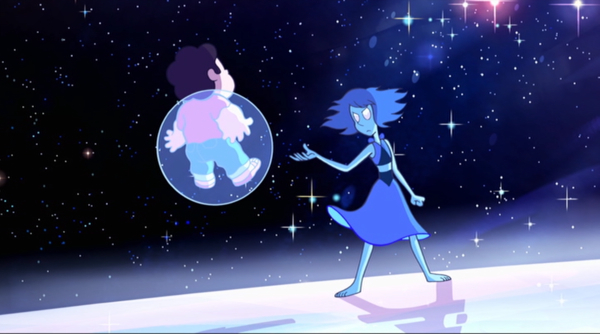 There are several vocal songs throughout this season. Many of them are random songs that Steven sings or others sung by his father, but the Gems have a few vocal songs of their own. Perhaps the most noteworthy song of the entire season is Garnet’s “Stronger Than You”. Not only is the instrumental track fantastic, but the lyrics and vocals all come together to create one of the most powerful moments in the series so far. The background music also stands out, something that is rare for music in a western animated television series to achieve. The composers Aivi and Surasshu take their inspiration from video game music, and it seems that they have been inspired by some of the best music that Japanese video games have to offer. It contributes significantly to the atmosphere of the scenes it accompanies, giving some scenes a mystical feel while giving others a real sense of wonder.

The pilot episode is included on the first disc. There are some minor differences between the pilot and the 52 episodes of the first season, but many of the series’ key concepts were already established before it got the green light to enter full production. Steven alone sings the series’ theme song in this episode, for a different purpose than in the rest of the series. 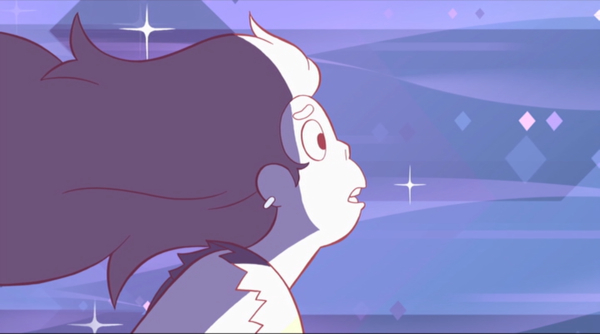 Steven Universe is sweet and thoughtful, which is not something that can often be said about animated productions to come out of North America. Adventure Time has something special about it that allows it to be continually entertaining, but this series is perpetually entertaining and meaningful. It is a joy to watch right from the first episode, and the brilliant writing and characterisation result in a beautiful and often touching series that never fails to amaze. The music is constantly impressive and worth listening to over and over again, which is possible thanks to the composers sharing their music online. The only disappointing thing about the first season of Steven Universe is that it ends. 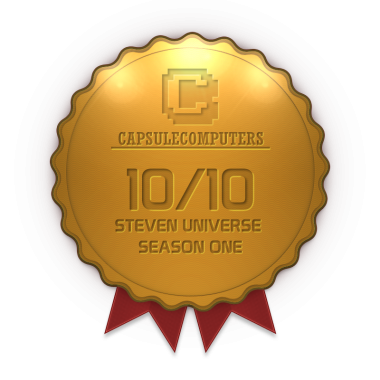