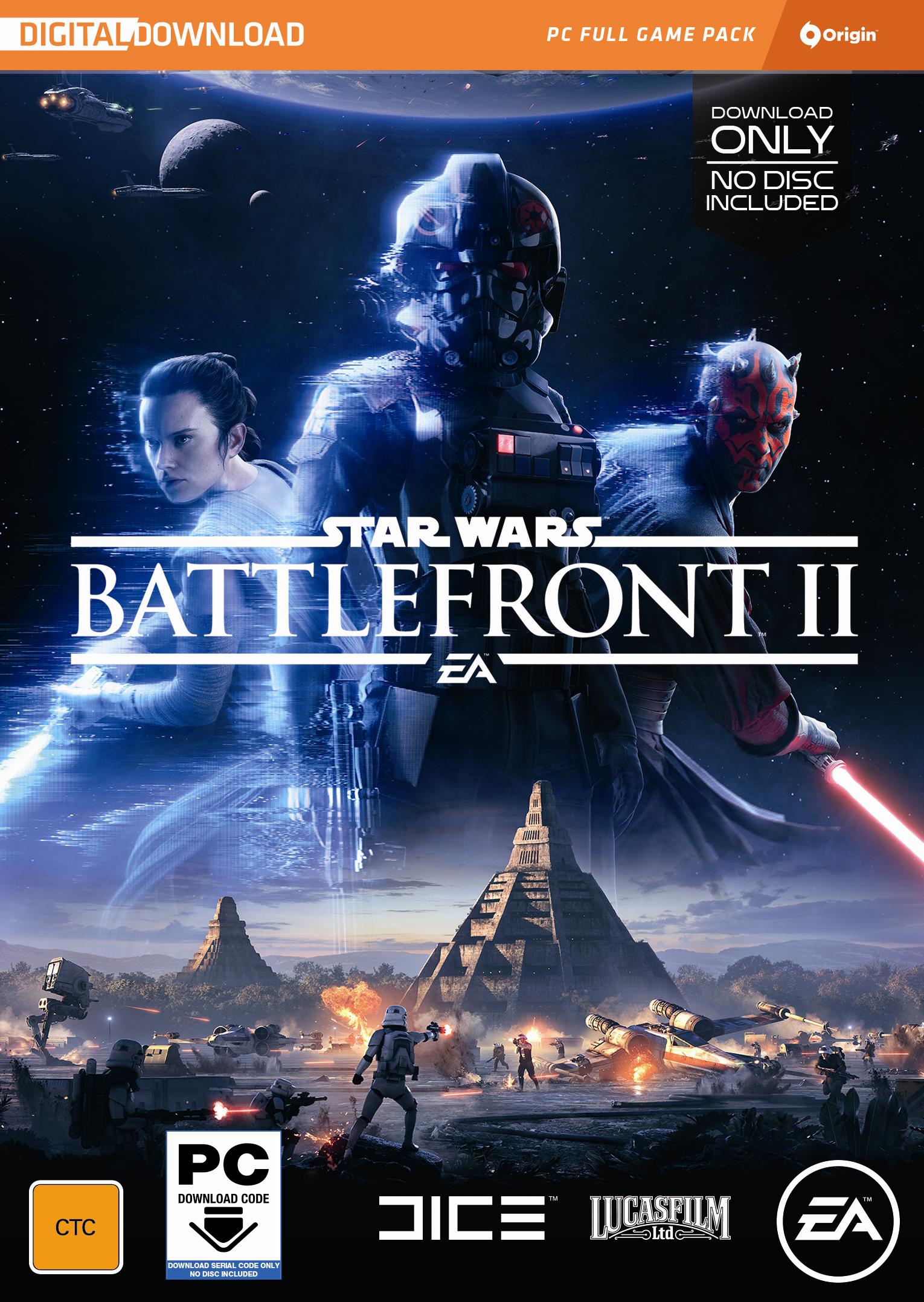 The single campaign stars Iden Versio, daughter of an Imperial admiral and commander of Inferno Squad, an elite special operations unit assembled by the Empire. The Emperor’s last orders is a ridiculous Wile-E-Coyote type scorched earth type plan that makes little sense beside fulfilling a need for having straight forward bad guys and good guys in the new Star Wars universe. So, off the players go to fight for the Rebellion once again. 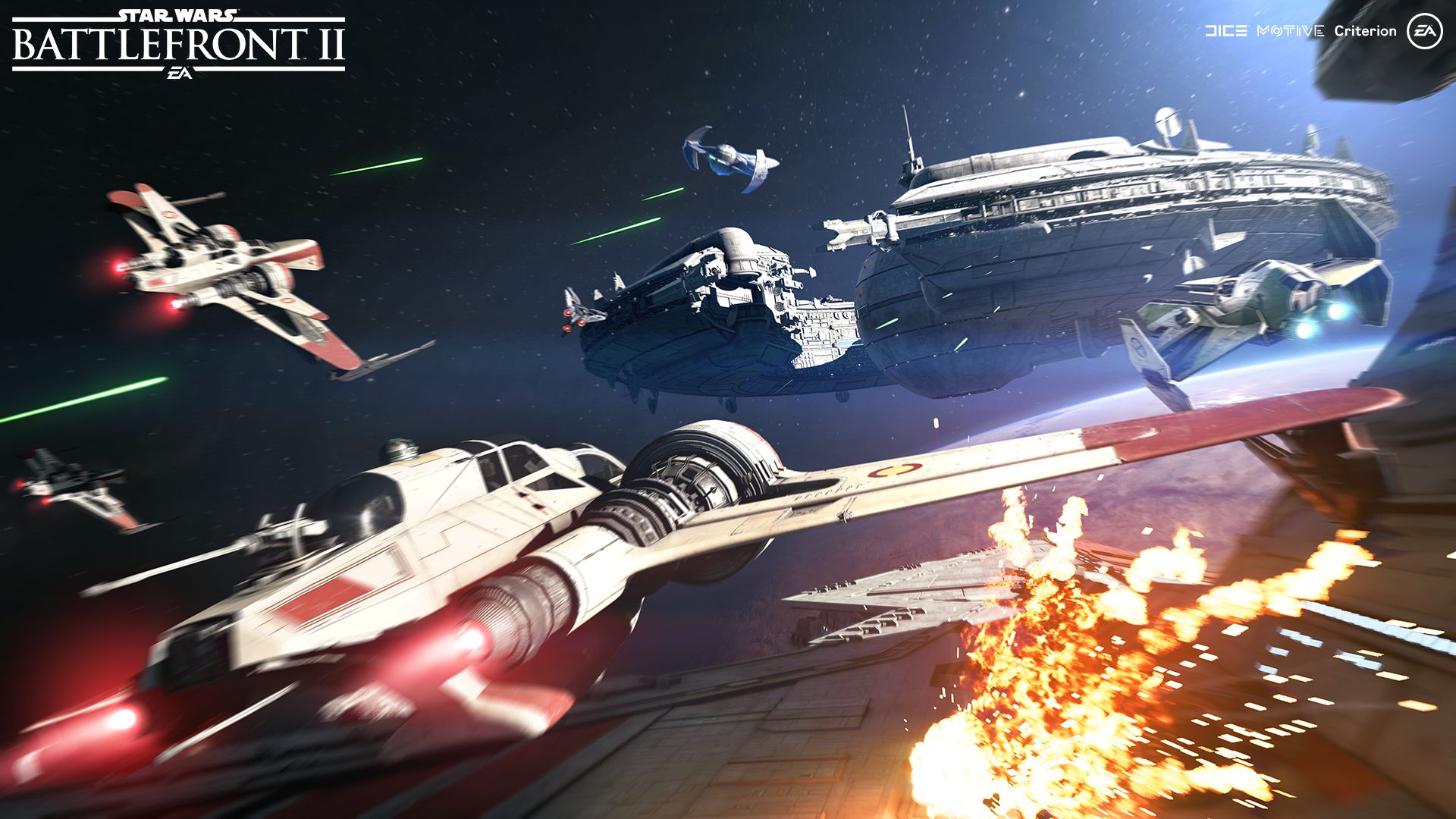 Star Wars: Battlefront II’s campaign feels like a rushed afterthought. The campaign itself is short, which leaves little time for character development or plot development. The plot that is there just feels silly and a little forced. We get it. Empire bad. Rebellion good. Worst of all, the plot doesn’t even provide enough content to really bridge the time between the fall of the Empire and the rise of the First Order. The entire package makes me wonder if the single player story was just a last minute addition once everyone realized the movie and the game would be released just weeks apart.

Star Wars: Battlefront II continues to be Battlefield-lite, a combined arms shooter simplified to be accessible to as many gamers as possible. The game is very easy to learn thanks to its simple, refined mechanics and the accessible control scheme. The game dispenses with ammo, opting for an active reload system that rewards skilled players who can time their clicks well. Dropping the ammo relieves a lot of the team play pressure found in the more challenging Battlefield franchise. Instead of the usual primary and secondary weapon, characters have only one weapon and three abilities on cooldown. Earn enough points in game by completing objectives and participating in eliminating an enemy, and players can respawn as powerful heroes. The controls are very easy to pick up. The ground combat is a riff on the basic shooter controls. The new Starfighter Assault mode’s ships are incredibly easy to handle with its mouse and keyboard friendly control scheme. 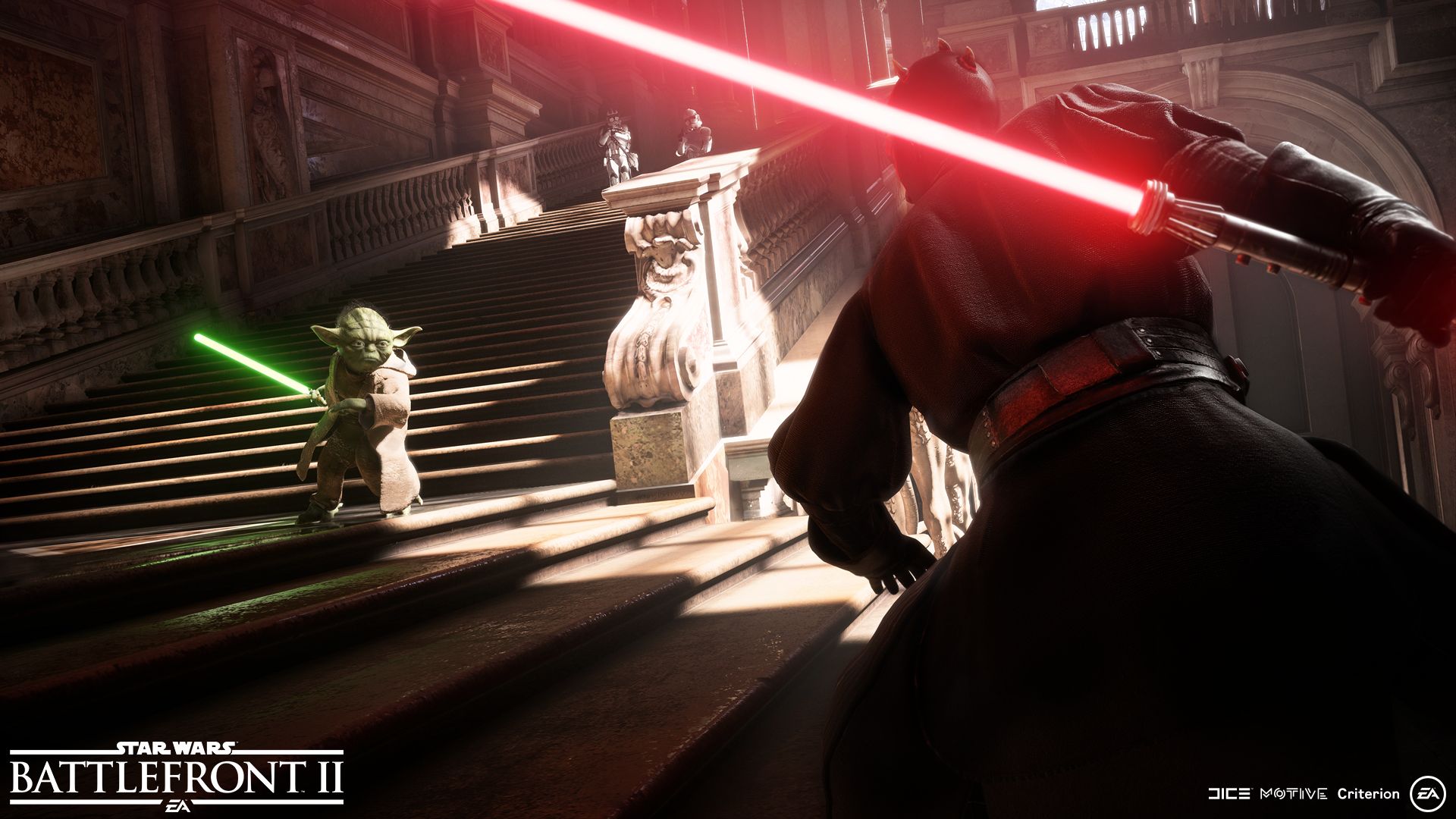 All the simplicity isn’t perfect though. Some parts have been simplified to the point basic quality of life features are missing. For example, the game has no server browser or any way to find out your latency in game. PC gamers will rightfully balk at the exclusion of either features as there’s no way to figure out if you need to find a better server to improve your gameplay experience because the ping is awful, let alone jump into a game playing your favourite map. The new squad system rewards double points for sticking with the players who spawn with you at the same time, which actually punishes groups of friends plan on working together as a team. The group function for friends is pretty barebones too, forcing players to either use the in-game voice chat in open microphone mode or mute each individual group member every if the group plans on using a third party software like Discord.

The game actually offers a really solid slate of game modes. The campaign is pitifully short at around four to five hours and serves as more of an extended tutorial. However, the single player content is buffered a little by the arcade mode that offers players bot matches and a series of single player team deathmatch and holdout challenges with modifiers and limited character selections. The two crown jewels in this year’s multiplayer game is Galactic Assault and Starfighter Assault. Galactic Assault is a 20 vs 20 combined arms mode DICE has been known for throughout the years with the Battlefield series. The maps are solid, with intense flashpoints and plenty of side areas to flank. The four classes are well designed, as each have plenty of alternate abilities for players to create their own customized sub-class. The tight execution really shows how much DICE has perfected the formula over the last decade. The Starfighter Assault mode really steals the show. It’s a 12 vs 12 objective based dogfighting mode that is new to the Battlefront series. It’s fast paced, exciting, and fulfills every childhood fantasy. This mode is what makes it a Star Wars game. Supporting the two main modes are small, fast paced modes like Heroes vs. Villains, the objective focused Strike, and the close quarter battle mode Blast. 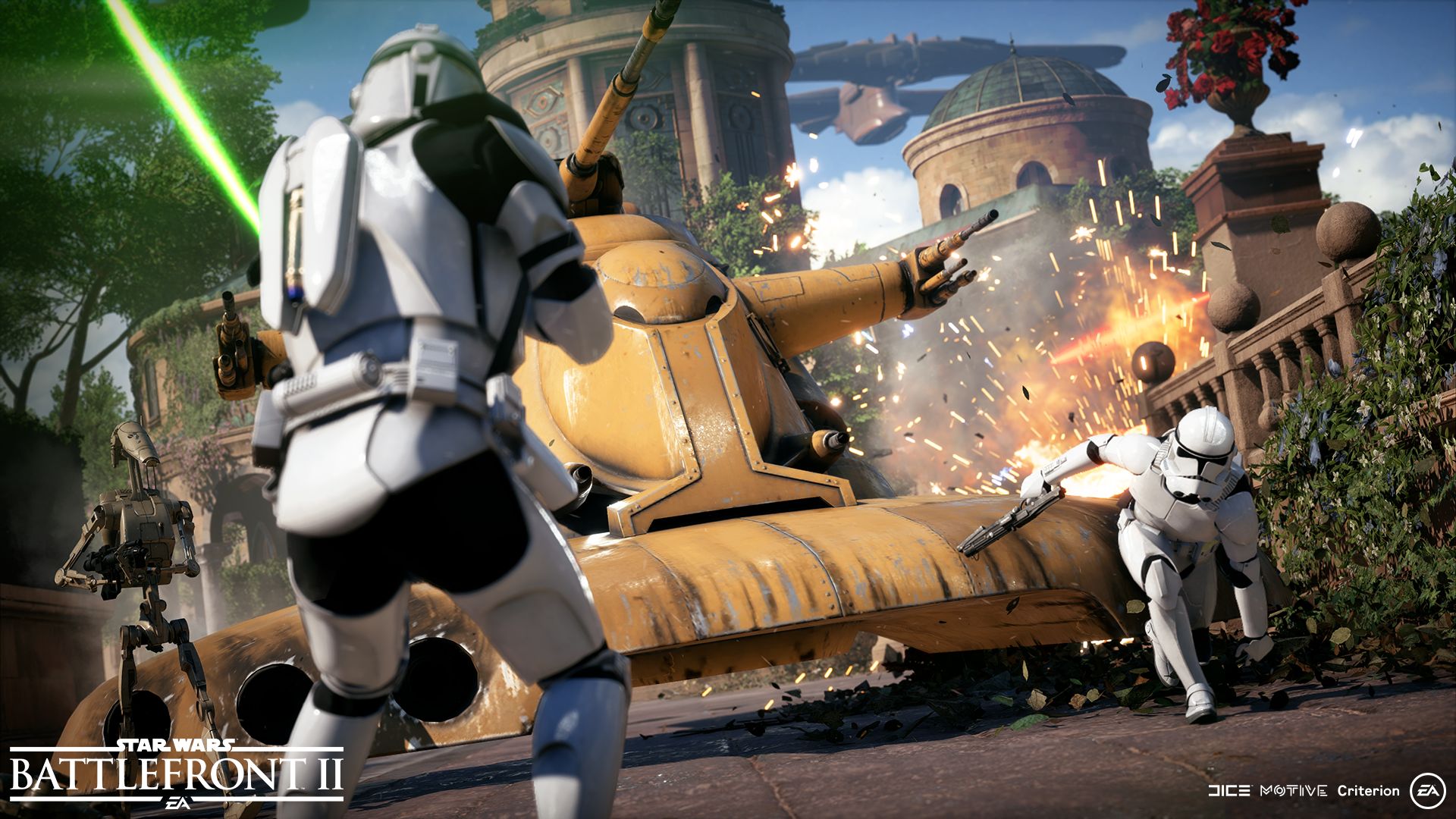 Of course, it’s impossible to review Star Wars: Battlefront II without discussing the disastrous implementation of microtransactions and its effect on the game. While it’s great that EA has opted to release all future DLCs for free, it’s come at a huge cost on the game itself: it seems like the entire system has been designed to encourage microtransactions. Look, making video games isn’t cheap. Most indie developers will never turn a profit on their title, and the cost to develop big budget games has skyrocketed over the years. But at the same time, the system EA and DICE have created is a monster. In its quest to make Star Wars: Battlefront II as friendly as possible to the casual gamer, the developers have opted to give players a flat amount of credits no matter how well or poorly they performed, meaning it’s a set period of game time to unlock new heroes and then even more hours to grind out the loot boxes. After the outcry of how many hours it would take to unlock all the heroes EA initially slashed prices by 75%, and when that failed to quell the fury, completely disabled microtransactions until they hit the right balance.

Whatever that balance might be, the current situation is a mess. Starting players only get the basic loadout for each basic class, vehicle, and hero. To gain access to alternative abilities or minor character buffs, players must either grind out credits to purchase a crate or craft a specific card using crafting materials found in crates. This severely limits the flexibility of players to respond in situations right off the get go. Certain heroes are also caught behind the credit wall. Though EA and DICE consider these heroes a sidegrade from he existing heroes, the different abilities can be quite handy in certain situations or for certain styles of play. While prices have been axed by 75%, the prices are still quite high. Combined with the standardized credit rewards, we get the AFK players farming credits plaguing the game to the detriment of people actually trying to play. At the end of the day, it feels like EA and DICE created some great core mechanics by simplifying the proven Battlefield formula into a more accessible format, then promptly hamstrung their efforts with a poorly thought out monetization strategy.

At this point, I’m not entirely sure how EA and DICE are going to sort out this situation. It’s clearly a problem that can’t be fixed by just disabling microtransactions. The issues are running a lot deeper and may require a more aggressive overhaul if EA and DICE plan on supporting Star Wars: Battlefront II in the long term. I doubt EA and DICE have the nerve to completely get rid of tiered cards and buffs at this point, which creates the feeling of a pay to win title gamers already payed good money to buy; however, significantly decreasing the time it takes to collect new cards is probably the next best compromise. Increasing the credit gain per hour, addressing the AFK player issues, and replacing credits for duplicates with the original plan of crafting parts are all good starts. This would also help newer players get up to speed with veteran players. The microtransaction situation is in theory salvageable, the challenge is figuring out the exact way to do it. 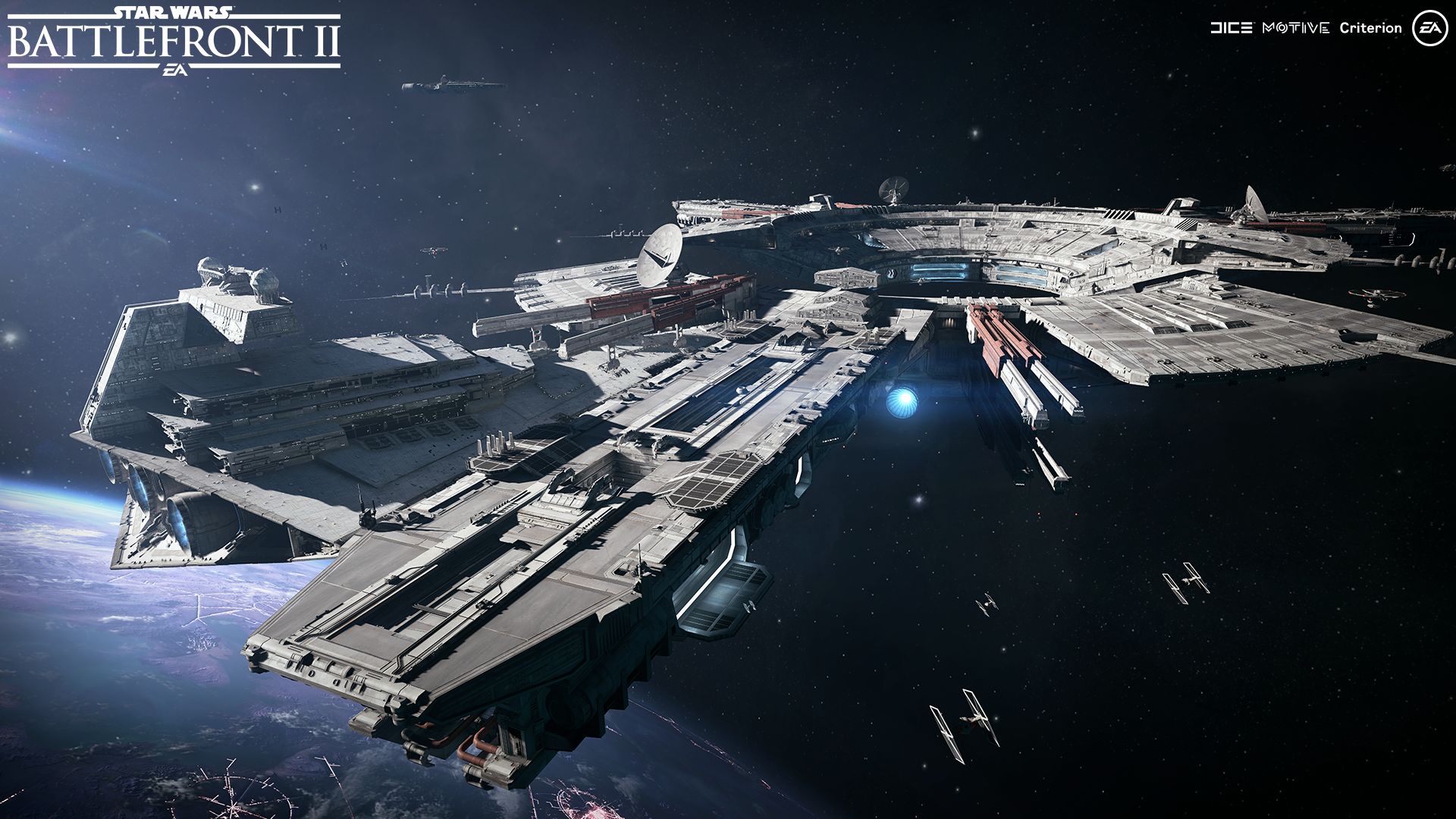 Star Wars: Battlefront II is a good looking game. The realistic art style does a great job recreating the feel of the movies. The cinematics are well directed. The models and textures are fantastic. For the most part, the animations are solid, but there are a few that could be improved. The crouching movement looks a bit off, and I ran into a repetitive issue with the injury animation chaining oddly in a way that turned Iden Versio into a twitching horror worthy of The Ring franchise.

On the technical side, DICE’s pedigree as a PC developer is clear. There are plenty of customization options for tuning the graphics. While I will have to cede the full technical breakdown to others better equipped to do so, I can say that my test rig did not run into any issues with the game. 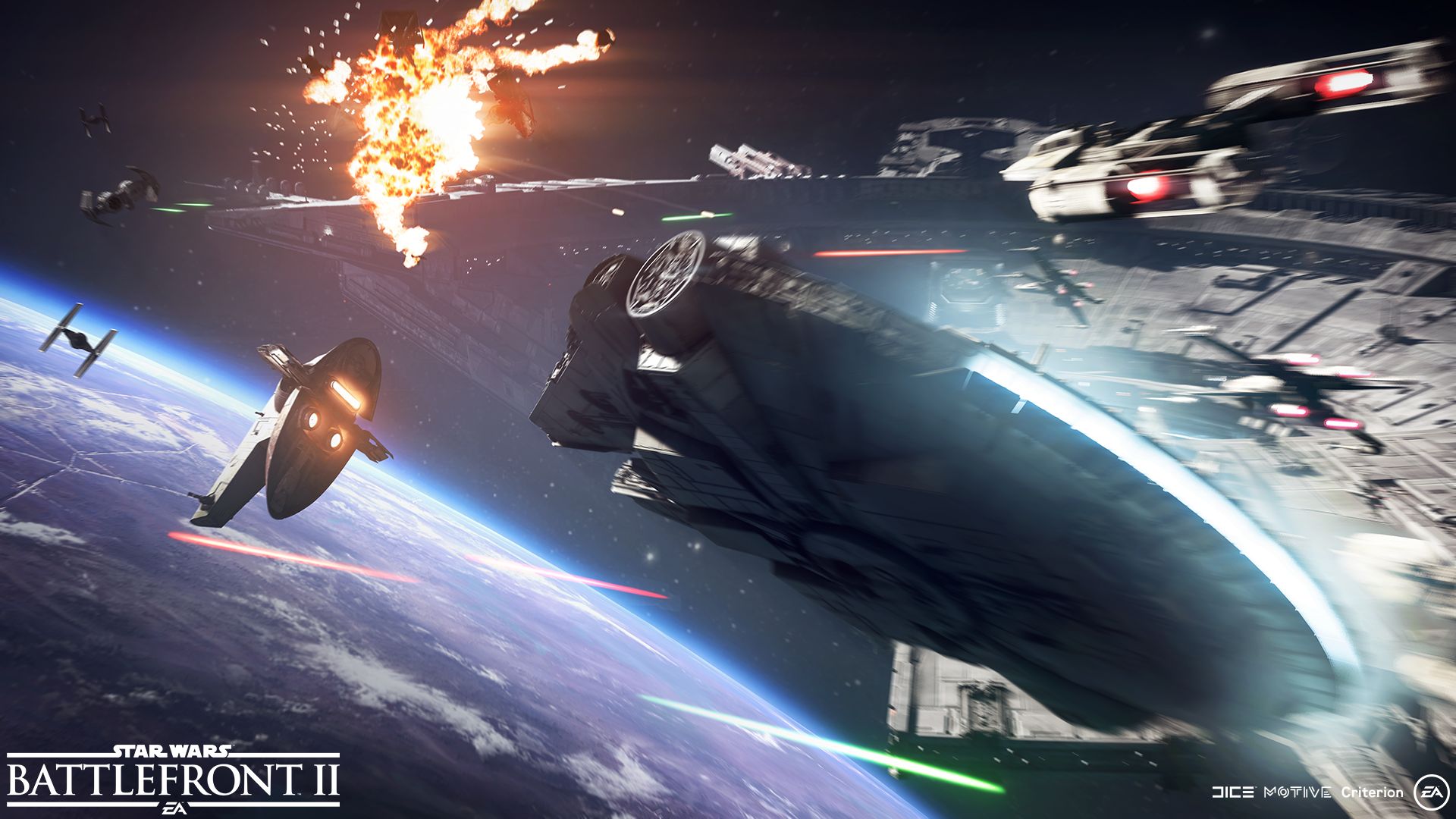 The audio experience in Star Wars: Battlefront II is excellent. The soundtrack is exactly what you would expect from a Star Wars title. The sound effects are of high quality. The voice acting is great. The only thing that could be improved is the lousy VoIP system built into the game. It needs more modern features like push to talk to make it useful. 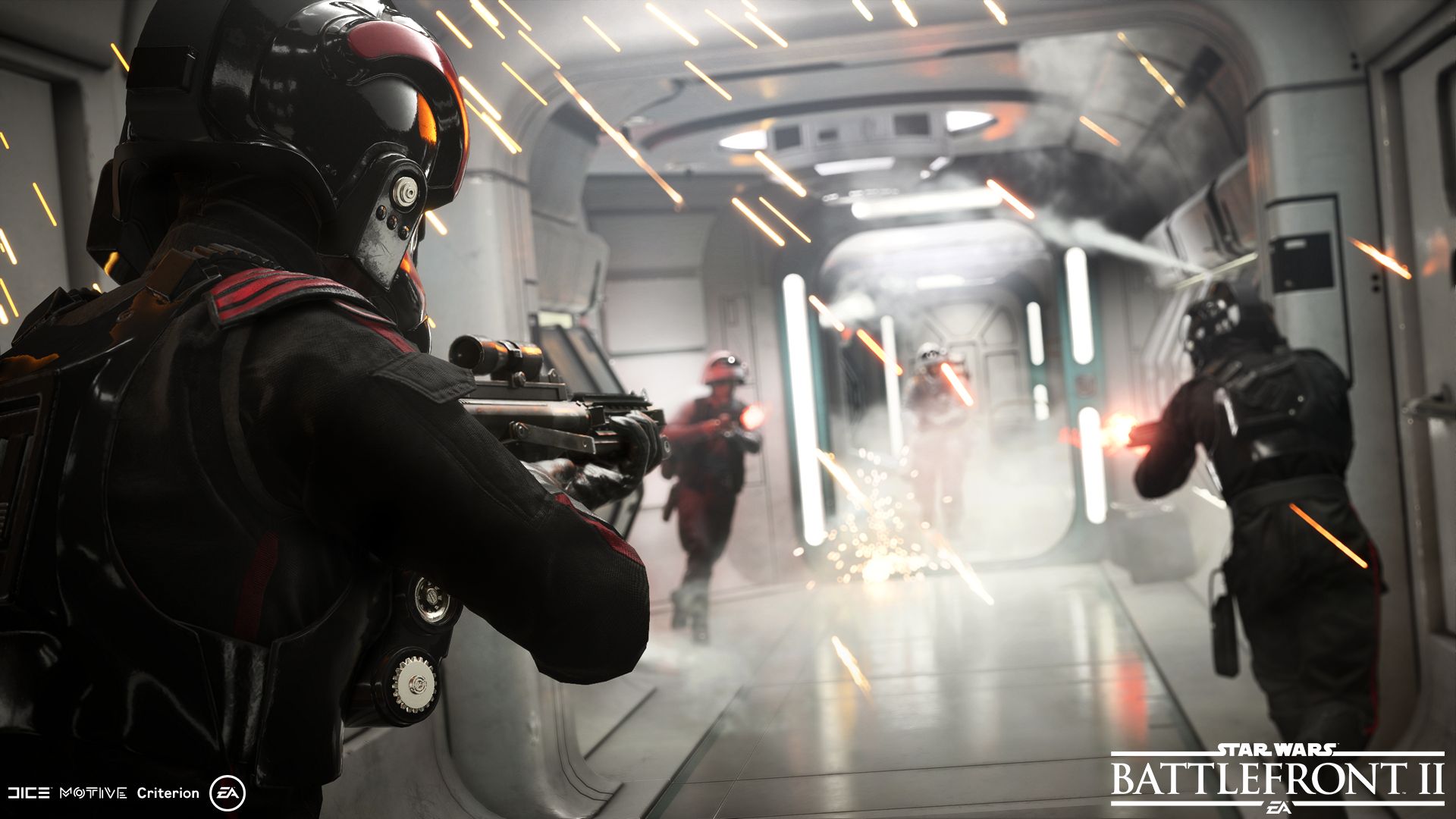 Star Wars: Battlefront II feels like a lot of wasted potential. The Starfighter Assault mode is fabulous and DICE has generally delivered a tight Battlefield-lite core experience that can appeal to just about everyone. There’s a lot of potential story to be told between Return of the Jedi and The Force Awakens. Unfortunately, EA and DICE have really dropped the ball. The campaign feels like a lame last minute addition and the microtransaction plan is so tightly woven into the game mechanics that it turn the game into an unpleasant grind. The AFK plague is just a symptom of the game’s ills. EA and DICE will need to make some serious changes to Star Wars: Battlefront II in the coming weeks, if not days, to right this starship.