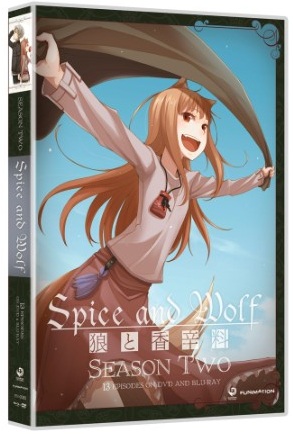 Overview:
Many anime can be remembered for their protagonists, their storyline or even their premise. But few can be remembered for all of these things. Spice and Wolf was a series that began as a light novel in 2006 by Isuna Hasekura. The light novel series was then adapted into a manga and then finally into an anime series. The series has already seen one successful season and now Spice and Wolf Season 2 graces North American shores with its presence. Picking up shortly after where the first season left off, how does Spice and Wolf’s unique blend of economics, romance and drama transfer to the second season?

Story:
Spice and Wolf Season 2 includes both the original video animation that was released separately from the rest of the series in Japan, as well as the next twelve episodes in the series. This means that the first episode, otherwise known as Episode 00, focuses on Holo, Lawrence and Norah as they celebrate their success during the finale of Season 1, and Holo shows off her jealous side.

Moving past the OVA, Spice and Wolf continues to follow the same storyline as the first season, with Lawrence and the wise wolf Holo traveling through the countryside in search of Holo’s original home. Along the way however, Lawrence, a trader and merchant who still is trying to make money on his journey, ends up entering some dangerous business deals that threaten not only to leave him bankrupt but also separate the two forever. 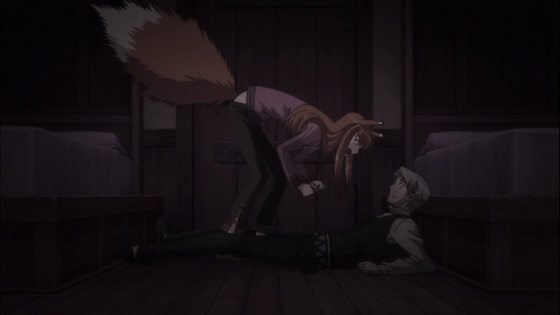 The storyline is broken up into roughly two story arcs. The arcs themselves each focus heavily on the separation that may occur between Holo and Lawrence should things go south. While this may seem repetitive while you are reading this, it is actually much to the shows benefit as not only do we get to see Lawrence’s haggling and merchant skills shine as he tries to predict the rise and fall of prices on the market and even backhandedly try to swing things his way, we also see the true feelings that hide behind Lawrence’s desperation.

Spice and Wolf may be a series that focuses heavily on economics and drama, but one of the best things this series has which many have attempted to do but failed, is create a slow burning romance story that will leave the viewer eager to see what will happen next as Holo and Lawrence’s interact with one another and their relationship reaches a new level despite the fact that he is a human and she is a wolf-deity.

The romantic aspect that continues to build up and the anticipation of fans wanting to see Holo and Lawrence journey continue with one another becomes the perfect piece to the dramatic puzzle that Spice and Wolf puts together. As earlier I mentioned that the focus of most of the problems that they encounter involve separating the two forever, either through Holo testing Lawrence or Holo being sold off to pay for Lawrence’s failed dealings.

By having the slow burning romance between Holo and Lawrence be the focus of the story whenever there is down time in the drama, viewers will tend to feel tense as things begin to look bad for the two of them. The drama itself tends to focus heavily around developing the two characters Holo and Lawrence and their interactions with one another are always priceless, especially whenever Lawrence manages to make Holo blush.

Artwork:
The first season of Spice and Wolf was animated by Imagin, but for the second season the studio behind the animation is a company named Brains Base. Despite this change however the characters don’t appear to have changed very much overall, though Holo’s tail seems to be a bit off in places, but often does a good job showing her true emotions. 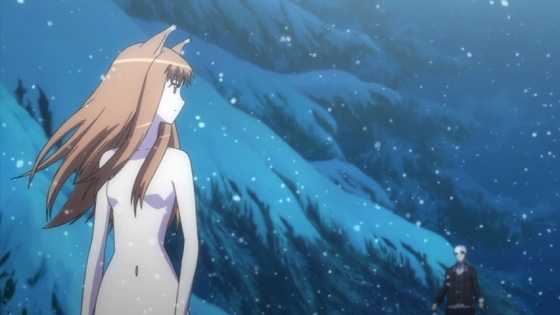 The color palette used is best described rustic and it compliments both the medieval setting and the feel of the story very well. The background settings of the towns occasionally feel a little bit too similar to one another, and after you’ve seen one you’ve seen all of them. This monotonous town design is broken up by a few festivals that are thrown every once in a while which help provide a dash of color to the town and provide Holo more chances to drink.

The animation quality is very well done and I only occasionally noticed a small dip in facial expression quality when the characters were viewed from a distance. Besides that however, the animation is extremely smooth and even side characters or non-important crowd fillers are well drawn and don’t detract from the quality.

During a few times in the series, Holo will appear nude. However her nudity isn’t actually present for fan-service purposes nor are there any actual nipples shown so there is really no need for censorship as the anime itself provides nothing to truly “censor.” Continuing with Holo, while she is not wearing her disguise, paying attention to her tail and her ears are truly a delight as special care seems to have gone into making sure they always respond to her emotions or reveal how she feels inside despite her stubbornness.

Audio:
As with past FUNimation releases, Spice and Wolf Season 2 retains both the original Japanese language as well as the English dub. In the original Japanese dub, Holo’s voice actress Ami Koshimizu provides one of the best performances in anime that you could act for. Especially when she is paired with Holo’s haughty and better-than-thou personality, it creates a masterpiece at work. The English voice actress which takes over for Koshimizu is Briane Palencia. Briane provides an excellent job by not only conveying the same presence as the Japanese Holo, but her slight accent makes Holo truly sound just like the deity she is. 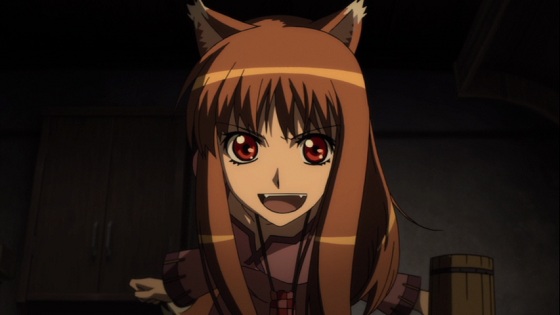 The rest of the cast is suitably well voiced, Lawrence’s authoritative voice sounds well when haggling and negotiating a deal but occasionally sounds out of place for softer moments of the story. Besides the voice acting, the background music is subtle and has a medieval styled them about itself. This means that you will be hearing old timey instruments used to accent certain moments of drama or comedy.

As for the opening and ending themes we have “Mitsu no Yoake” by Akino Arai and the ending theme is “Perfect World” by Rocky Chack. The opening theme is very slow paced and the animation works quite flawlessly with the song and is something the viewer will gladly be able to sit through each episode. “Perfect World” is similar to the first season’s song as not only is it played alongside simple drawings and animation of the characters. It is interesting to see the different pictures displayed to the song, but can be otherwise forgettable and not as appealing as the opening song.

Characters:
As in the first season, the only two characters which are focused on and receive any character development are Holo and Lawrence. Lawrence is a traveling merchant who uses his intelligence and connections to try and make deals that will make him a profit. He dreams of making enough money to be able to open up a shop of his own and quit traveling. In the first season, Lawrence wasn’t given much character development outside of being an intelligent merchant, but this time around he can be seen as a man struggling with his feelings for a certain wolf-deity while also trying to turn a buck or two. 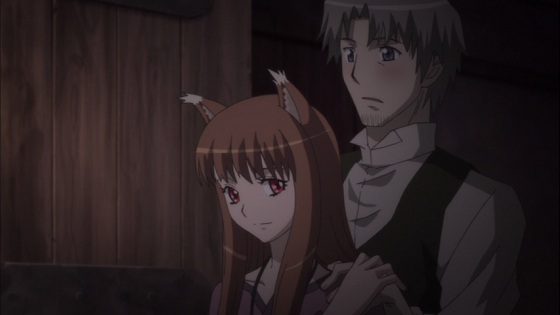 The other main character is the Heroine Holo. “The Wise Wolf” Holo as she calls herself was a wolf-deity who used to provide healthy grain harvests for a town that worshipped her. But now she is traveling alongside Lawrence in an effort to see the world and also find her hometown. She is a very mischievous character who not only messes around with Lawrence through simple actions but sometimes appears to work against him to test his resolve. Holo begins to understand the fact that she is a wolf-deity and that the person she is developing feelings for’s life will be over in a blink of an eye compared to her own existence.

The romance between these two characters is perhaps one of the best you can find in the fantasy-romance genre in recent years. Even though Lawrence can appear a bit idiotic to Holo’s feelings and Holo often denies her actions and blushes, their relationship can best be compared to that of a young couple. They are unsure of how to advance, but their chemistry is perfect which makes the slow-burning romance of Spice and Wolf its biggest highlight.

Extras:
As per standard in a FUNimation release, you have your standard anime trailers for upcoming or recently released anime. Also included is a clean version of the opening and ending song which is actually quite a treat in this case as the opening animation is a sight to behold. 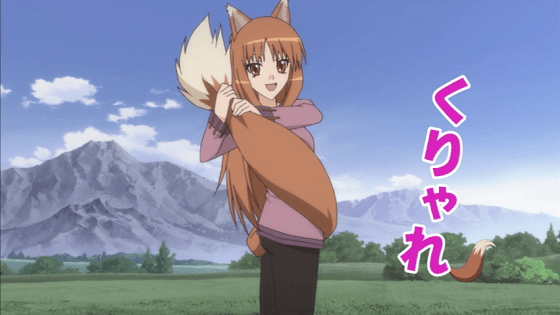 Besides these two standard inclusions to the discs, there are also two pieces of extra “with Holo” content. The two pieces of content can be best seen as “advice” but also provide a bit of out of character time to watch Holo and her strange antics. The first is “Studying with Holo” where she describes a little bit about the world such as their food and other things, while the second is “Stretching with Holo, Yoitz Style” wherein Holo explains how she keeps herself and her tail in shape. This can be seen as a bit on the fan-service side but also for comedic purpose as well.

Overall:
Spice and Wolf Season 2 does everything that fans of the first season would have wanted. It spends a reasonable amount of time on Lawrence’s trading and the economics of their world, but also focuses heavily on developing the budding relationship between Holo and Lawrence. The biggest highlights to Season 2 are the character developments that take place and the romance. There is little action to be had, much less than the first season, but the long conversations are still prevalent. There are a lot of moments where the show may become slow simply due to heavy focus on the economical side of things, but Spice and Wolf Season 2 not only meets Season 1’s expectations but surpasses them.

I give Spice and Wolf Season 2