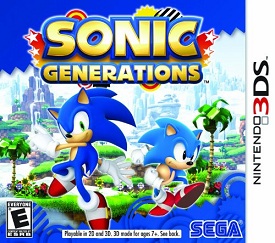 Overview:
There are only a few gaming companies where the very mention of their name brings about an image of their iconic mascot. One such company is Sega and their iconic Sonic the Hedgehog. It is hard to believe that Sonic has been around for twenty years now, but what better way to commemorate twenty years of the blue blur than to create a game to quite literally jump through time and visit various parts of the Sonic series. 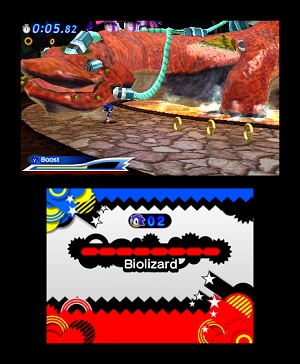 It seems like everyone in the world of Sonic knows that it is Sonic’s birthday because they are planning to hold him a surprise birthday party. Though it is a bit odd to think they would be able to surprise the speedy Sonic as he shows up early to the party when only Tails is there. It turns out that none of his other friends have even shown up yet and the only person who is there at the moment is his close friend Tails with a birthday chili dog.

Before Sonic has a chance to have his delicious hot dog however, a mysterious purple creature appears and rips open a time anomaly that causes Tails to be sucked in. In an attempt to save his friend Sonic rushes in to the hole as well and finds himself in the middle of a white world devoid of color. To make things even stranger, familiar stages have appeared that the two quickly recognize as the Green Hill Zone. Even stranger than that, two other familiar sights quickly show up in front of them, and that is their old classic selves. Now the two Sonics must work together to try and defeat the mysterious creature known as the Time Eater which has been tearing holes in time and stripping the land of all history.

While this story may sound great at first, it unfortunately is extremely poorly told and has little actual bearing on what is going on at any given time. While players don’t need a whole lot of structure to set up the story there are tons of missed opportunities with the various zones and past enemy appearances which are not even commented on. In fact most of the time the Sonics and Tails won’t even be fazed by what is going on and simply make an idle comment before moving on to the next section which creates a completely bare bone experience.

Visuals:
Rarely have we ever seen a stark contrast between the ages of games than in Sonic Generations. Classic Sonic appears short and simple while Modern Sonic shows the advantage of having more detail for a more advanced time. This is similar with the two Tails characters but especially true when the stages are involved. All of the stages in Sonic Generations are taken from past titles and all of them have been redesigned and adapted to the 2D style that Sonic Generations uses. This means of course that some of the older favorite stages have seen an immense graphical enhancement with new paths added and extra features while modern stages have also seen a minor upgrade with new areas as well but also a transition to a 2D plane. 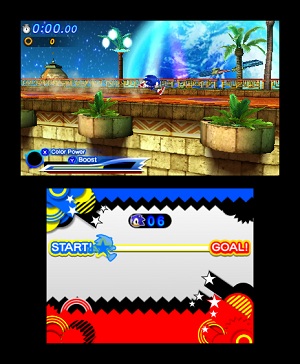 Considering this is Sonic Generations on the Nintendo 3DS, there is also the inclusion of the 3D aspect. Whenever the 3D slider is turned on there is an amazing amount of depth added to the title and provides a clear background and foreground layer for players to move around on. This is especially true whenever Sonic is running at high speed and ends up transitioning between the various planes of the title. It is a shame however that I could not keep the slider for the 3D on the entire time I was playing as the high speed movements of Sonic with the inclusion of the 3D began to cause discomfort or became a liability to my Sonic’s life and occasionally needed to be shut off.

Also there are a couple of parts of Sonic Generations which does not take advantage of the 3D capability at all, such as the menu and loading screens. The dialogue sections of the game where the characters talk with one another is another example of bad 3D implementation. While these may be few in number, the character animations and 3D display just feel awkward and out of place in the visual novel like setting in which they are portrayed.

Audio:
Being that Sonic Generations takes levels from past Sonic titles it only makes sense that there are also plenty of classic and memorable music tracks from Sonic the Hedgehog’s history included. Sonic Generations takes it a step further than simply copy and pasting old songs and actually includes re-mastered and reimagined versions of each song. The two act parts of each stage help provide a great contrast between classic Sonic songs and newer updated music. Players won’t even need to worry about playing each level if they want to hear the songs, as fifty musical tracks can be and listened to whenever.

Those hoping to hear some of Modern Sonic’s voice will be a bit disappointed as the dialogue scenes are not voiced fully, if at all. There are a few words that are said occasionally or at least a few noises that are made by talking members of the cast but that is unfortunately all. Otherwise you would believe that everyone was as mute as Classic Sonic who simply either acts happy or angry in appearance. 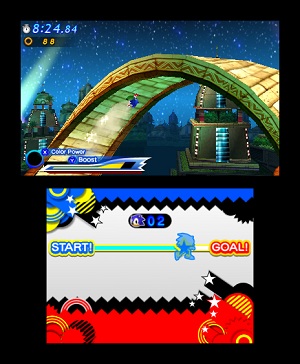 As you begin the story of Sonic Generations you will notice that you are given two acts for every stage that is unlocked. Act 1 will be the stage where you will need to play as the Classic Sonic while Act 2 will contain levels that must be played as Modern Sonic. What makes each act unique is the fact that every stage will not only be designed differently but will also factor into each Sonic’s strengths. For example, most of the Act 1 stages will feature more platforming and simple running while Act 2 will usually feature much more speed and more difficult obstacles.

The reason for the difference is that Classic Sonic only knows the original moves he knew from the first title in the Sonic the Hedgehog series, though he can learn more as you progress through the game. Modern Sonic on the other hand knows a vast variety of moves including homing attacks, sliding, boosting, grinding on rails and even various quick time events to jump off of walls and more. In fact between the two Sonics, Modern Sonic felt like much more fun to play and seemed to really capture the speed that a Sonic game should have.

After you make it through each Act in a stage you will then unlock a special stage where you will need to control Modern Sonic and travel down a pipe-like corridor to try and chase down a Chaos Emerald. These chases get more difficult as you make your way through the game with early levels only containing the bubbles that need to be popped for your boost bar to fill while later levels will include multiple bombs, dash pads, bumpers and other obstacles in your path.

After you finish a set amount of levels you will then face off against a Boss Gate. A boss gate also has two parts, with the first being a race against a bad guy or antagonist from Sonic’s past through one of the stages you have played already. These are rather simple and it is good to see a few of these older villains show up for at least a brief appearance. After that you will also fight a boss enemy from one of Sonic’s older games. 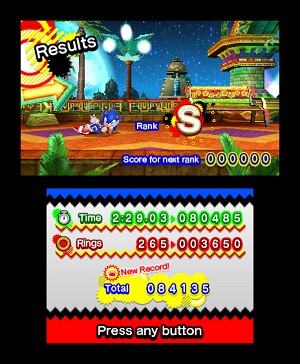 Unfortunately there are only four boss battles, with one of them being quite basic to play and also quite short. These battles are very fun on the other hand, especially the battles near the end of the game. As far as the game’s length goes, unfortunately the story mode is quite short, so short in fact that there are only seven stage sets, three races and four bosses. As a whole, the short length of each stage can translate perfectly for the mobile gaming device that is the Nintendo 3DS as they are perfect for a quick run through as you wait in line or wait at a bus stop.

Besides the rather anemic story mode there are a number of extra mission that can be unlocked and completed. These missions require a set condition to be completed but doing so will unlock a misc. collectible item ranging from music, character model or piece of art work. These missions are unlocked by playing through the game normally but can also be unlocked by Street Passing other players or buying them with Play Coins.

Besides the mission mode there is also the time attack mode which allows the player to try and blast through a level as quickly as possible and try to beat the best scores of other people around the world as they can upload their times to the Leader Boards as long as the handheld is connected to a Wi-Fi source. To round out the gameplay modes there is also a multiplayer aspect which is quite lively and easy to access.

Those who have a friend with the game can play local multiplayer through the Versus mode in which both players attempt to race across a level similar to the races in the main game and try to reach the end before your opponent. The same can be said for the online multiplayer mode where I experienced little lag through the matches I played. This mode is a nice little diversion, though the stages are exactly the same as the story mode minus the inclusion of a time warp that will hold you in place temporarily. This of course means that your opponent could be a master of a certain stage and easily leave you in the dust, though this is also countered by the fact that the game randomly chooses between your choice for a stage and your opponent’s choice, sort of like flipping a coin.

Overall:
In the end Sonic Generations provides everything that most Sonic fans could ask for. There are plenty of nostalgic stages to be played through and plenty of classic pieces of Sonic included making everyone happy. Unfortunately the short length of the title as a whole, barely any characters being shown except Sonic and Tails and the 3D implementation which can sometimes cost you a life hold the title back from being great. There are also plenty of times that a level could be seen as overly difficult and can be frustrating for new players but most players shouldn’t have too much trouble clearing each stage. Sonic Generations on the Nintendo 3DS still provides all the joy of the old Sonic titles in a nice portable format but falls short in more than a few ways.