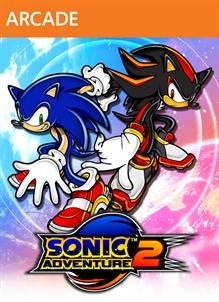 Overview
Nostalgia can be a tricky thing. I’m sure you have all heard that before, but when it comes to Sonic, those words are used quite often for good reason. Sonic Adventure 2 is one of those titles that many fans see as the last great Sonic game before the slump, or the start of Sega’s dark period for the blue wonder. I’m actually quite a fan of the game and have re-visited Shadow’s debut many times over the years to get my fix. Sonic Adventure 2 is now back in our sights with a new HD paint job, and has given me yet another reason to trek through my favorite 3D Sonic title to date. How does it hold up? 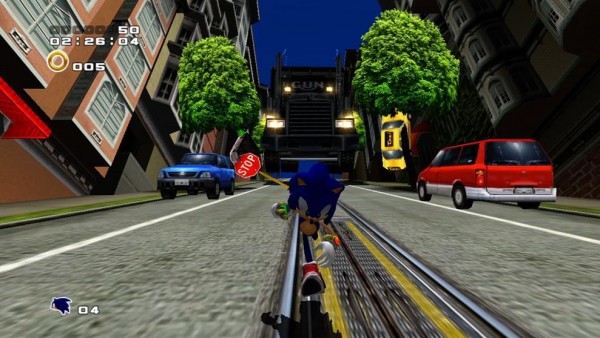 Story
Rolling around at the speed of sound. Ah yes folks, we are talking about Sonic Adventure 2 here. Back when this title was first announced, Shadow was boasted as the greatest threat the series had ever seen. To make matters more interesting, players could play as this dastardly hedgehog and take the “dark” path as they fought against Sonic and company. Of course this is all the work of Eggman, and along with Rouge the Bat, players can set out to control the world…or save it with Sonic, Tails, and Knuckles.

The story isn’t exactly that great by today’s standards, but it’s watchable and the campyness of all of the events and cheesey one-liners spewed are sure to bring back some great memories of your care-free childhood. In my opinion – aside from Sonic Generations, this is the last game that got it right when it came to a narrative for the franchise, as it’s a much more believable plot for Sonic, and one of the more interesting and hyped periods of his long and windy road to the top. 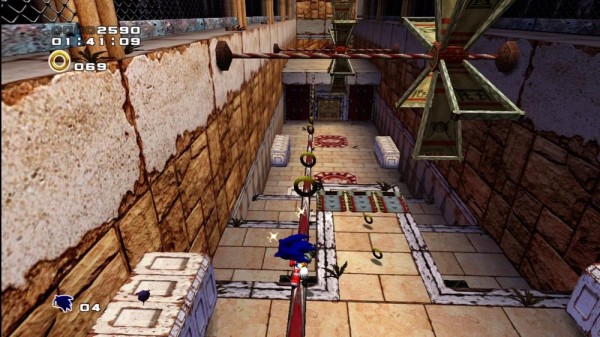 Gameplay
While awaiting this remake to hit consoles, I was anticipating and dreading playing through stages all over again. Remember when we used to fall through the floor as Sonic or run into a cheap jump death? Well, those moments are not nearly as bad as I thought they would be, but trudging around as Knuckles and Rouge…yeah…that is in a category of terrible all to itself.

Sonic and Shadow’s stages consist of following a track until the end or fighting a boss during certain points in the story. These two hedgehogs control about the same, with all of their jumps, grinding, and aerobatics thrown in. The gameplay is super-smooth as well, letting the player embrace speed for a good portion of the stages, slowing down from time to time to fight off some robots with some old-fashioned bounce driven combat. From time to time, there are light moments of frustration as springs can over-shoot the player into a pit, but as I mentioned, these areas are few and far between and a little tuning of accuracy can do wonders to keep the momentum going in the player’s favor. 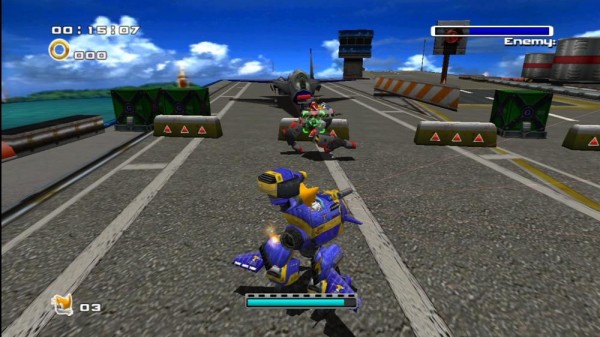 Tails and Eggman are now in mechs and must shoot their way throughout each stage in order to progress, with an emphasis on proper targeting and switch pressing to open doors and move onward. These robot-like entities work well enough, but never fill the role of Tails’ flying ability or come off as ground breaking by any means. Oddly enough, even though these machines are heavy, they do control with ease and never seem to be “robotic”, letting players scurry on through a stage without much of a problem.

Knuckles and Rouge…well, where do I begin? When I was younger, Knuckles’ gliding and wall climbing abilities were the best part of Adventure 2. For those unfamiliar, this duo’s levels consist of hunting three keys to progress onward, where the player must gather hints from floating monitors to track down their locations. What was interesting back then has not aged well now however, as this searching is just a flat out chore. During the Pumpkin Hill zone, the imperfections of the formula really shine through, as the stage just doesn’t seem fit for much gliding or speed. When you fly through a Sonic or Tails stage in less than 3 minutes and then have to break the pace with a hunting stage, it can kill one’s own aspirations to move forward with the main plot. Add in the tedious and sometimes cheap enemy placement and awkward zooming camera angles, and the only thing you will be hunting for is a way out. 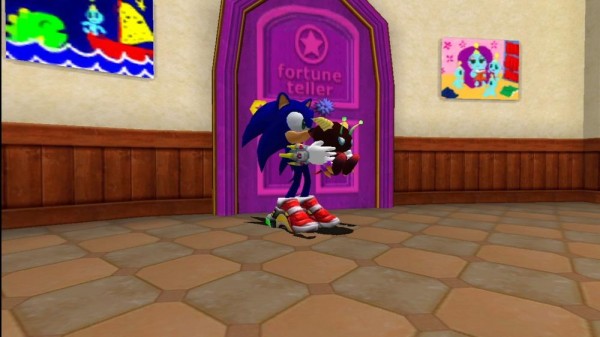 Chao Gardens were added to SA2 as more of a bonus feature, but after a short time the player will quickly learn that this is where the replay value can be found. As levels are explored, Chao keys can be found to unlock these lovely little creatures. The Chao are placed in a garden of sorts where the player can interact with them, feeding them fruit or capsules to get stronger, or letting them suck the life out of saved animals in order to transform. There is a lot of depth to the system and letting Chao compete in races or participate in the Kindergarten in order to learn new abilities and up stats just furthers the experience, rewarding the player for their playtime within the main game. 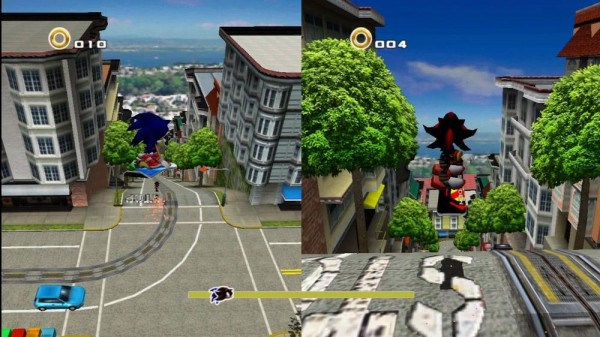 I imagine a good amount of you discovered Adventure 2 on the Gamecube as Sonic Adventure 2: Battle, which added in a multiplayer mode of sorts so that friends could go head to head in races, shooting battles, and hunting-styled games. Of course the races are the star attraction, as they are well fit for competitive play, allowing the player to use their rings for power-ups that slow their opponent down. Hunting works about the same, and is a lot more enjoyable in a multiplayer format. Shooting fights with Tails and Eggman are nothing too special however, but act as a decent distraction from the other features when the players are in need of a change of scenery. All in all, there are a ton of things to do within Sonic Adventure 2. Completionists will be in heaven due to the emblem collecting and rank perfecting, and those with friends are sure to enjoy the Battle bonuses due to how well most of the competitions still hold up. Is everything perfect? No, not by a long shot. There is however a coat of nostalgia attached to this release though that will attract Sonic fans everywhere, and those hardcore fans will surely find love within this re-release all over again due to how solid the original product was to start with.

Visuals and Audio
When Sega does an HD remake, it’s usually done right. Thankfully, Sonic Adventure 2 is yet another repaint that shines in a glossy finish, making that colorful art design pop. Textures appear to be smoother for both models and environmental objects, treating all eyes to one beautiful looking Sonic game. Animations are also well done as well, with the original 60 frames-per-second movements in play that give this game it’s “blast processing” like speed. 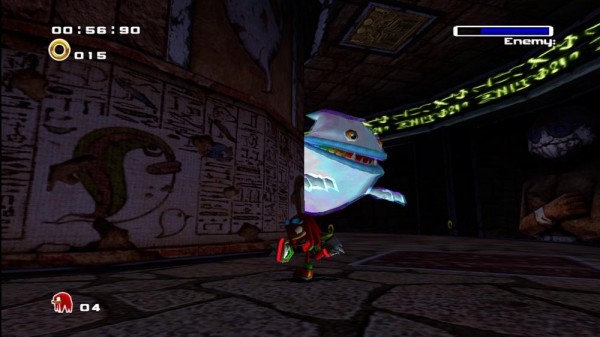 Audio is a bit more of a mixed bag. Of course the soundtrack is great, and the first tune alone is legendary within the series. The voice acting however isn’t as sharp, as characters seem to love repeating themselves with their own special phrases. I mean, sure, they sound decent enough, but hearing Tails scream “Son-nic.!” in that whiny tone every single time he stubs his little fox toe is sure to grind on some nerves after just a few deaths. Cutscenes are also a bit cheesey, with characters delivering terrible puns that would make Sinbad cringe.

Overall
I have always been the one that stood up for Sonic Adventure 2 during arguments and my opinion still stands that this entry is one of Sega’s finest for the franchise. That said, the hunting stages have not held up well over the years and there are a good number of glaring flaws that new players who’ve just joined us after “Generations” are sure to be frightened away by. Sonic himself (as well as Shadow) is still a blast to play as… and since this is a Sonic game, you have to applaud that feat alone due to the onslaught of mediocrity that followed this solid yet chipped gem. Sega have certainly had their rough periods, but the Sonic series has been back on the right track for a few years now, with this remake being a fine example of just what the publisher can produce. Nostalgia aside, there is a lot of good, great, and OH MY GOD! WHY! going on within this HD port, and no Sonic die-hard should pass up the chance of “escaping the city” all over again”.