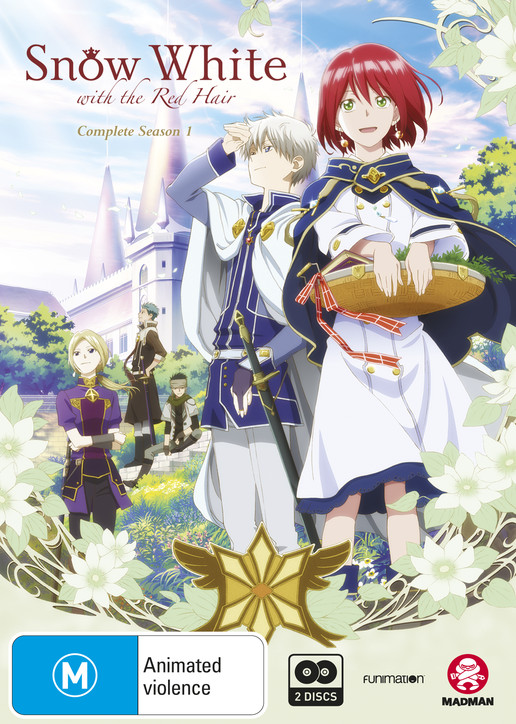 Shirayuki is a herbalist living in the kingdom of Tanbarun. One day, Tanbarun’s notoriously pathetic prince, Raj, decides that he must have Shirayuki as his concubine. His ‘reasoning’: she has red hair, which is exceedingly rare in this world. Instead of doing as he wishes, she cuts off some of her hair to leave behind as a gesture towards Raj and runs away from her homeland. Shirayuki wants to be in control of her own destiny, so she decides to find a new life for herself. Although she nearly ends up getting kidnapped by Prince Raj, her life takes on a whole new meaning when she accidentally meets the selfless Prince Zen of the kingdom of Clarines. In her new life, she meets Kiki and Mitsuhide, Zen’s attendants, and Obi, a mysterious but agile young man who gains her trust.

Before going any further, please note that this anime and the manga it is adapted from are not based on the famous fairy tale Snow White. Shirayuki’s name does mean ‘snow white’, however; that is how this series gets its name. Some obvious references to the most famous Snow White story are made in the first episode, but this is about as far as that relationship goes. 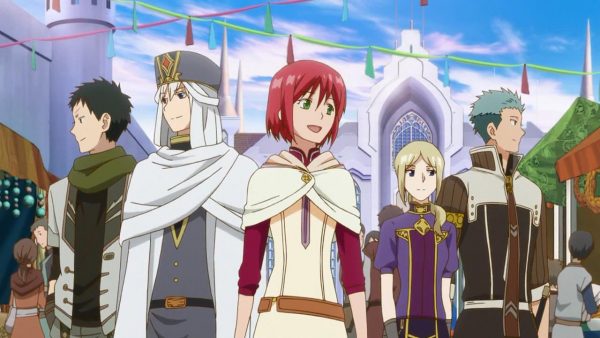 Almost everything about this series is positive. The first thing that stands out is Shirayuki’s confidence and determination. It is disappointing just how few strong-willed and independent female characters there are in the world of anime and manga, so Shirayuki is indeed rare in more ways than one. She does not want to have to cover up her red hair and she certainly does not want to be objectified. Running away from the moronic prince of her homeland is the next step towards her destiny, not her hiding from her problems. The next thing that stands out about her is that she is genuinely smart and talented. Furthermore, she has the desire to learn more and increase her knowledge, which is an excellent message to send to viewers. Excluding the violent scenes that mostly only occur in flashbacks, this is a better story for parents to be showing to their children than classic Disney films. The biggest problem with Snow White with the Red Hair is that Shirayuki is often made to remind the reviewer that she is in control of her destiny. It is plainly obvious that this is the case from the first episode, and it almost makes her come across as insecure as a result. Fortunately, of all the things the production team could have done to diminish the quality of this anime adaptation, unnecessary but short internal monologues are by no means the worst thing that could have been present. 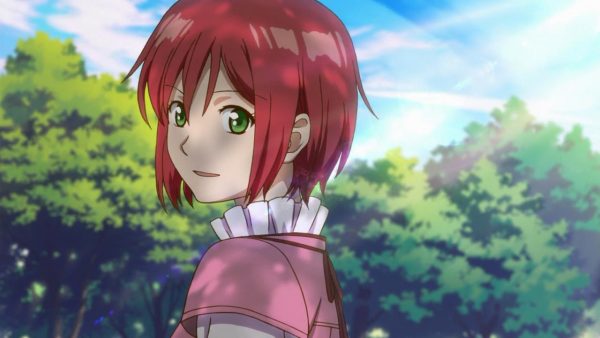 When Shirayuki encounters Prince Zen, or rather when he randomly encounters her, it is clear that the two of them want to get to know each other in spite of the class divide that separates them. This class divide is brought up on more than one occasion, including by Zen’s older brother. Despite this being a fantasy romance, their relationship is depicted in an unusually believable way. Prince Zen initially shows distrust towards Shirayuki, but becomes convinced that she is just an ordinary person and not an assassin. In a flashback involving his attendant Mitsuhide, the reason for Zen’s distrust towards strangers is carefully explained. His interest in Shirayuki, a person of relatively low social status, is also explained in a way that builds on his character. Zen wants to see all of Clarines and hear the voices of all of its people, rather than filling out paperwork and basing his decisions solely on what he is told by high-ranking members of society. There is something more to his interest in having Shirayuki in his life, of course, but his romantic feelings cause him a great deal of anxiety. Not only does he have to hope that Shirayuki reciprocates his feelings, he has to consider that getting into a relationship with her as a prince comes with its own problems. It is evident that a lot of thought has gone into developing all of these characters and giving them reasonable problems to deal with. Regardless of his anxieties, he enjoys having many people in his life, and having them with him in the castle gives him strength. Shirayuki too wants to be able to spend more time with Zen in the castle, so she takes an exam to be an apprentice court herbalist. She wants to be his strength, and he is a source of strength for her. This series proves that you can have a strong female protagonist in a fantasy romance story, one that has the courage to face whatever comes her way with or without help.

The animation is consistently fluid, which makes the action scenes more engaging than they would have been had they consisted of still frames. These action scenes can get a little violent, but not to the point of being off-putting. The European fantasy setting is filled with luscious locations; the forests, lakes, islands, towns and castles are all wonderful to look at and appreciate. It is easy to see why Zen wants to see all of Clarines; even the birds of the world are animated majestically. Everything about the visuals makes this world feel complete and even real, in a way. Some people seem to enjoy stroking Shirayuki’s hair when she is asleep, but aside from that weirdness, there is no ‘fan-service’ present at all. Some evil men want to exploit Shirayuki for her red hair, but they never explicitly make it sound like sexual objectification. It is still female objectification, though, so they are portrayed as the enemy and even made to look evil. This is a part of what makes it feel like a real world, even if it is an unfortunate reality that some people want to exploit women to make money. There are so many positive things to see that make it seem like a wonderful place to live in for the most part. 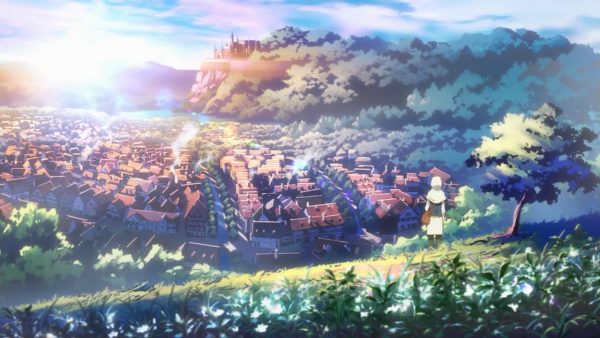 In addition to being visually appealing, this series is very pleasant to listen to. The background music is all beautifully orchestrated, and it helps add to the charming atmosphere present throughout this season. Both the opening and ending songs are great too. They are not the most memorable songs to be featured in anime, but they are catchy. FUNimation’s English dub is excellent as well; Brina Palencia in particular portrays both Shirayuki’s confident nature and her anxieties perfectly. Nowhere else does their dub leave anything to be desired either. The dub script basically follows the subtitle script as well, and the two scripts even match at multiple points. It is rare for an anime to be quite as nice to listen to as this one is, and FUNimation’s outstanding dub only adds to that quality.

The textless version of the opening and ending animation sequences are included. They are nice to look at, but do not offer anything special. 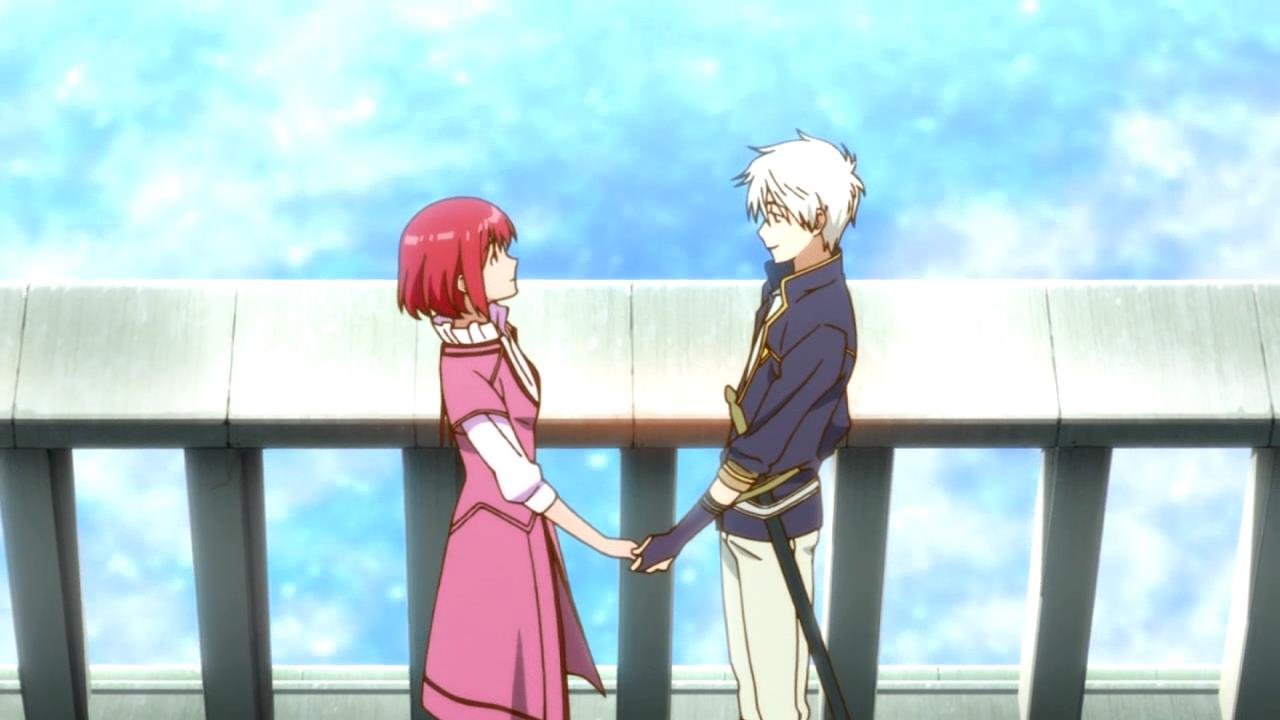 Snow White with the Red Hair is consistently amazing. It mostly features episodic plots while still moving along the underlying narrative of the relationship between Shirayuki and Zen. The main cast members are well-rounded, much more so than characters usually are in slice-of-life series. This is due to the effective character development, aided in part by the meaningful and detailed flashbacks to events in the past. Zen’s friend Kiki has yet to be truly rounded-out as a character, but both the main protagonists and the other supporting characters help make this series about as engaging it could be. One of the best female characters in modern anime can be found in it, so not only is this a beautiful albeit fantastical romance story that can appeal to just about anyone, it could even serve as an inspiration to people looking for positive role models in their lives. 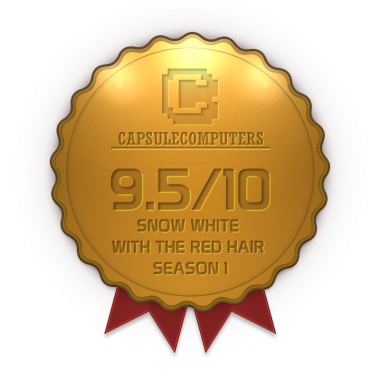 This is a beautiful fantasy romance story that features lovable three-dimensional characters and never disregards the painful truth of class separation.
9.5