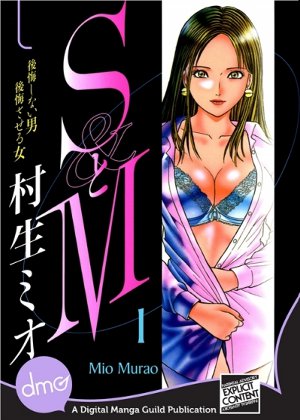 Overview
Just the letters S & M put together carry a very specific connotation, but there is a lot of range than can exist within the term. While S & M does match the nicknames of two of the characters back in school, it can also mean slave and master, which seems to fit well. Slave and master can go from a pair of completely willing participants all the way to one holding the control over the other leaving no choice. So, where within this range does the manga S&M fit and does the series hold enough drama to be able to carry the plot through this first volume.

Story
S&M is the story of one of the absolute most safe minded individuals ever, Makoto Toda. Living by a simple principle of never having any regrets, Makoto has played it safe in ever aspect doing small and mundane tasks at work, being excessively conscientious of crossing streets, and marrying a reasonable woman. This of course does not make for a very exciting story, which is why Makoto does in fact have one decision that he has regretted relating to his school crush that will come back to haunt him in ways he could never imagine.

His troubles begin with his 20 year school reunion, where meeting with his old friends Makoto dreads coming face to face with his school crush for fear that she will somehow end up ruining his happy marriage and family. What he doesn’t know is that what is coming is much much worse, as instead of his school crush coming to the reunion her 20 year old daughter Saya arrives instead and spends much of the time speaking and getting to know Makoto. Saya appears to just be curious at first, wanting to know the man her mother liked so much in school, but becomes more and more unsettling as more is revealed. Saya doesn’t just want to get to know Makoto, she wants to have him like her mother never got a chance to.

Makoto problems of course only get worse, as Saya joins the company he works at as his subordinate and aims to have him any way that she can. From using other employees to get close to him, to blackmailing him with pictures of the two of the together, S&M is filled with drama as Makoto tries desperately to get a handle back on his life. Slave and master in the case of this series is Saya controlling Makoto to get whatever she wants, regardless of the fact that he wants nothing to do with it. Saya escalates more and more until she can get him to a point where he can do nothing, but whatever she says. There may not be the whips and leather readers may come in expecting, but Saya is the master and Makoto is now her slave.

Artwork
S&M does a good job with keeping the artwork for the most part realistic. There are a good number of characters throughout Volume 1 and there is a great job in ensuring that they are all varied enough to easily tell them apart. Makoto himself is given a distinguishing mark in the form of a mole between his eyebrows, to aid the reader even more in identifying him in the present and flashbacks despite all the characters he meets. Likewise the different clothing throughout is realistic from what is actually worn and how the characters are wearing them, especially with how Saya and her mother are both about teasing glances of their panties.

Nudity itself does come up a couple scenes per chapter, but the way that it is shown gives additional insight of the characters. Early on there is no shying away from characters being full nude, but as the story goes on and Makoto is forced to try and keep what is happening as secret as possible, the acts are often more covered up themselves although these acting are taking place in public as well.

Extra Content
This release has little in the way of bonus content to go with the 8 chapters that encompass S&M Volume 1. The book kicks off right away with the start of the first chapter and goes straight through until the end of the eighth, with not much else besides. However, this release has been made available in a multitude of digital formats for those wanting to be able to read the story however they would wish.

Overall
The title S&M may certainly catch a few eyes with the ideas that come to mind with the juxtaposition of the letters, but the story presented here is in fact much more dramatic than erotic in nature. Not that the situations the characters get into aren’t appealing to the eye or imagination, but the focus being much more on the emotions of both Makoto and Saya. Makoto as he slowly feels everything he has worked so hard to protect through his careful nature falling apart and Saya as she maliciously takes apart Makoto’s life to attain some sort of vengeance for her mother. A fairly deep emotional story with a decent amount of titillation that creates a stark introduction to the end of Makoto’s life as he knows it.