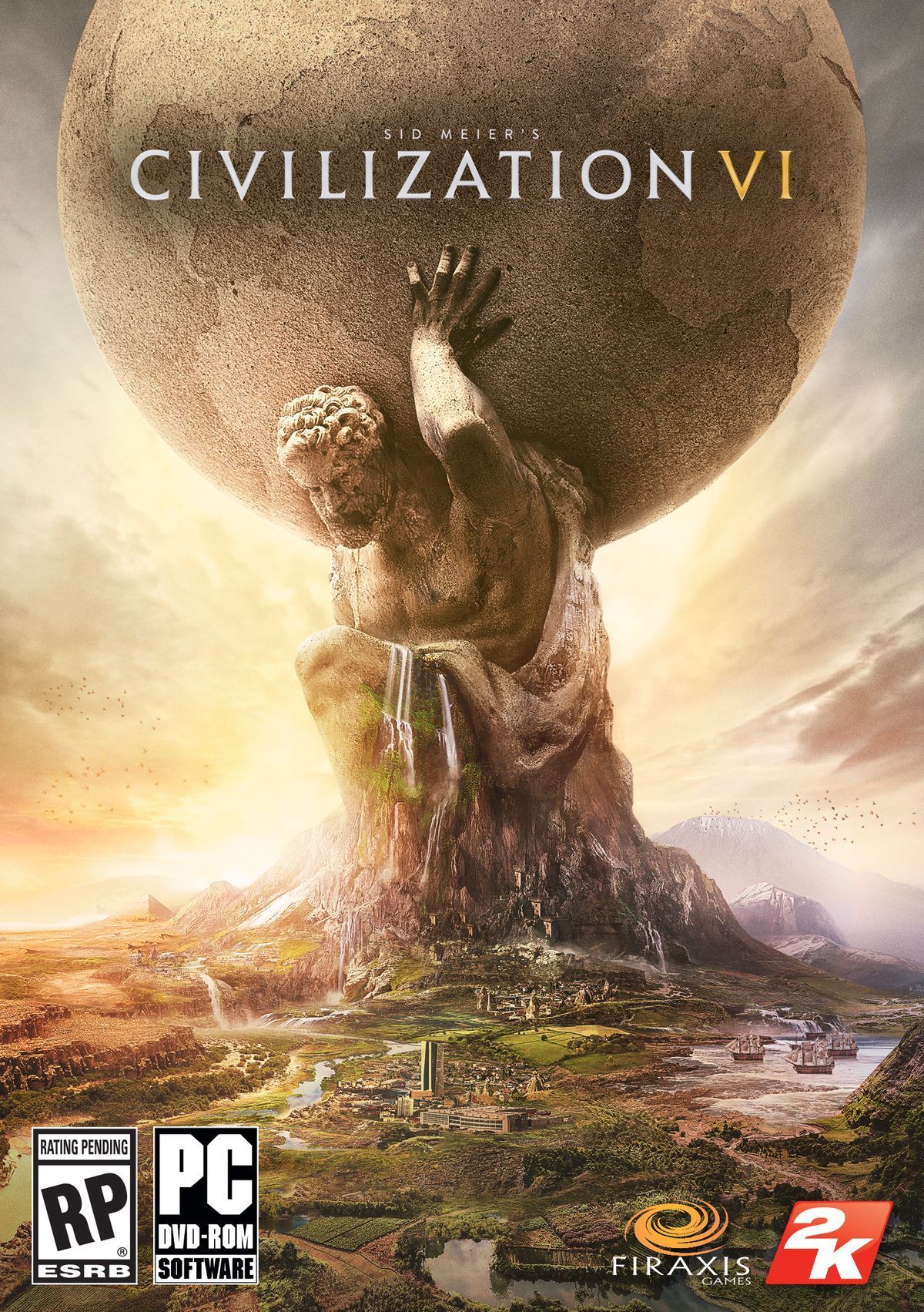 After a quick jaunt through space, Firaxis Games is returning to Sid Meier’s Civilization’s roots on Earth. Sid Meier’s Civilization VI represents a modernization of Sid Meier’s classic series with new and updated gameplay mechanics. Launching with 20 great leaders, players will take their civilization from the Stone Age to the Information age while they attempt to seek victory through four different paths.

As a 4X strategy game, Sid Meier’s Civilization VI does not have much of a story but rather a meta-game. There is a little bit of writing in the game when it comes to diplomatic interaction between nations. What little writing is there is decent, though there is not enough to be able to give a fair judgement on excellence. I appreciate that Civilization VI continues the tradition of adding quotes from famous people to the game. The collection chosen range from humorous to thought provoking words that often compliment the situation where they appear. 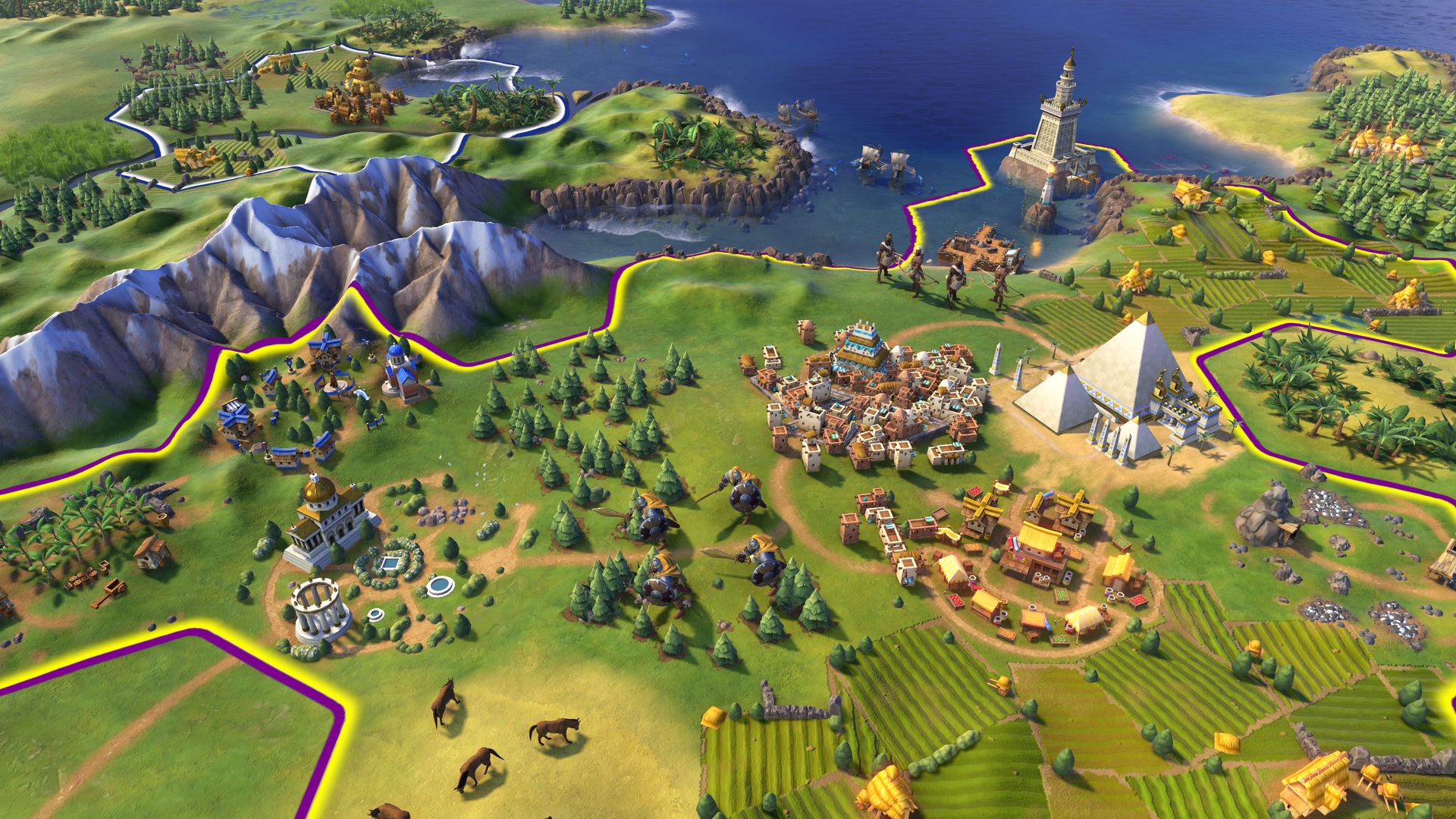 Sid Meier’s Civilization VI introduces a variety of new gameplay mechanics to the series, making a lot bigger changes to the gameplay than the previous title Civilization: Beyond Earth. At its core though, it is still a 4X strategy title. Players kick off the game by selecting a great leader that commands one of twenty powerful civilizations through history. Each civilization has its own specialty and many are optimized for specific types of victory. Each leader has their own main personality with some randomized influences when controlled by an AI that often reflects that civilization’s strengths.

The game kicks off in the Stone Age, with each player given a city and a warrior. There are four ways to victory. Domination victory is the most straight forward and familiar to gamers: conquer all enemy capitals and win the game. An equally aggressive, albeit more spiritual than physically violent, method of victory is a religious win. This method is new and is essentially a cross between a diplomatic and domination victory where a player must found a religion and spread it to at least 50% of all cities for every civilization. To attain a culture victory, players will need to develop culture and tourism that will attract outstrip all domestic tourism in other nations. Finally, a science victory will require players to run the long game by having them launch several vehicles into space. The four paths to victory are very diverse and provide a lot of different opportunities and scenarios for players. The victories need quite a bit of planning to pull off and while pivoting mid game is possible, it is definitely a huge challenge. 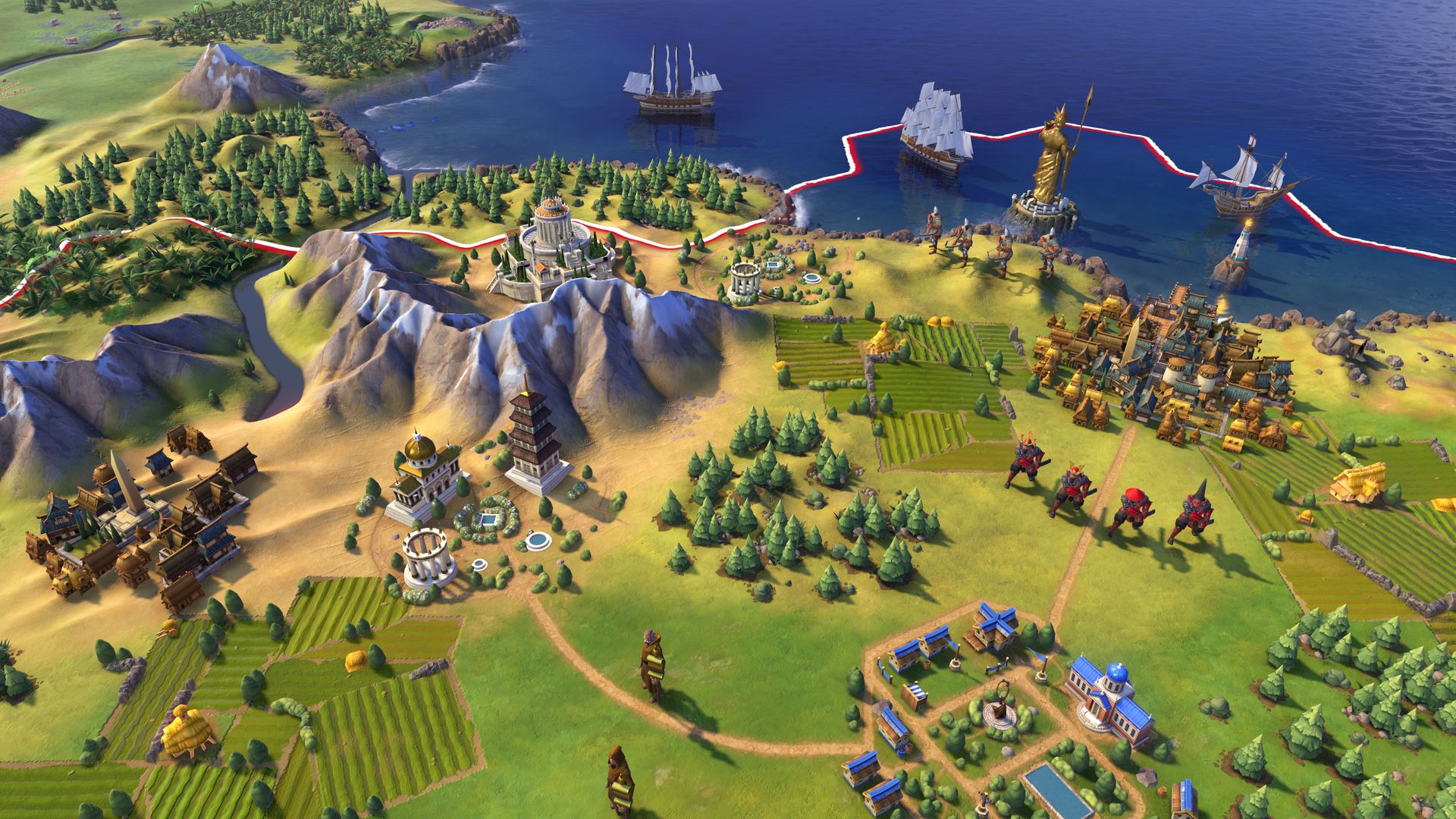 There are two research trees in Civilization VI serving two different purposes. The science tree is most familiar to 4X players, providing leaders access to a variety of technologies like new units and buildings. The civic tree focuses more on a variety of government policies, civilian units, and special buildings. Firaxis Games is introducing an active research system with Civilization VI. Almost every research has a set of conditions that will trigger a boost to research, halving the number of turns needed. The system goes a long way in further rewarding early long term planning with a quick ascent through the research trees. The new organization for research makes a lot more sense now and helps give players a little extra flexibility in their research paths as they are now able to research both simultaneously instead of having the two jammed together in one tree.

While domination victory is likely the most straight forward victory method in Sid Meier’s Civilization VI, the game features a refinement of the warmonger system. Players have a few options on when and how to declare war, but must also balance the hefty warmonger penalties that now affect their own population. Normally, players need to give a five turn warning before going to war, but they can also opt for a surprise war if they are willing to accept a huge warmonger penalty. The new Casus Belli (just war) system allows players to research certain items on the civic tree to create situations that will allow them to go to war with a lower penalty. While the penalty for going to war is non-existent in the early game, the penalties climb rapidly as a civilization progresses through the ages, forcing players to plan their strikes carefully. The new system goes a long way in balancing out the domination victory with the other three victory paths. 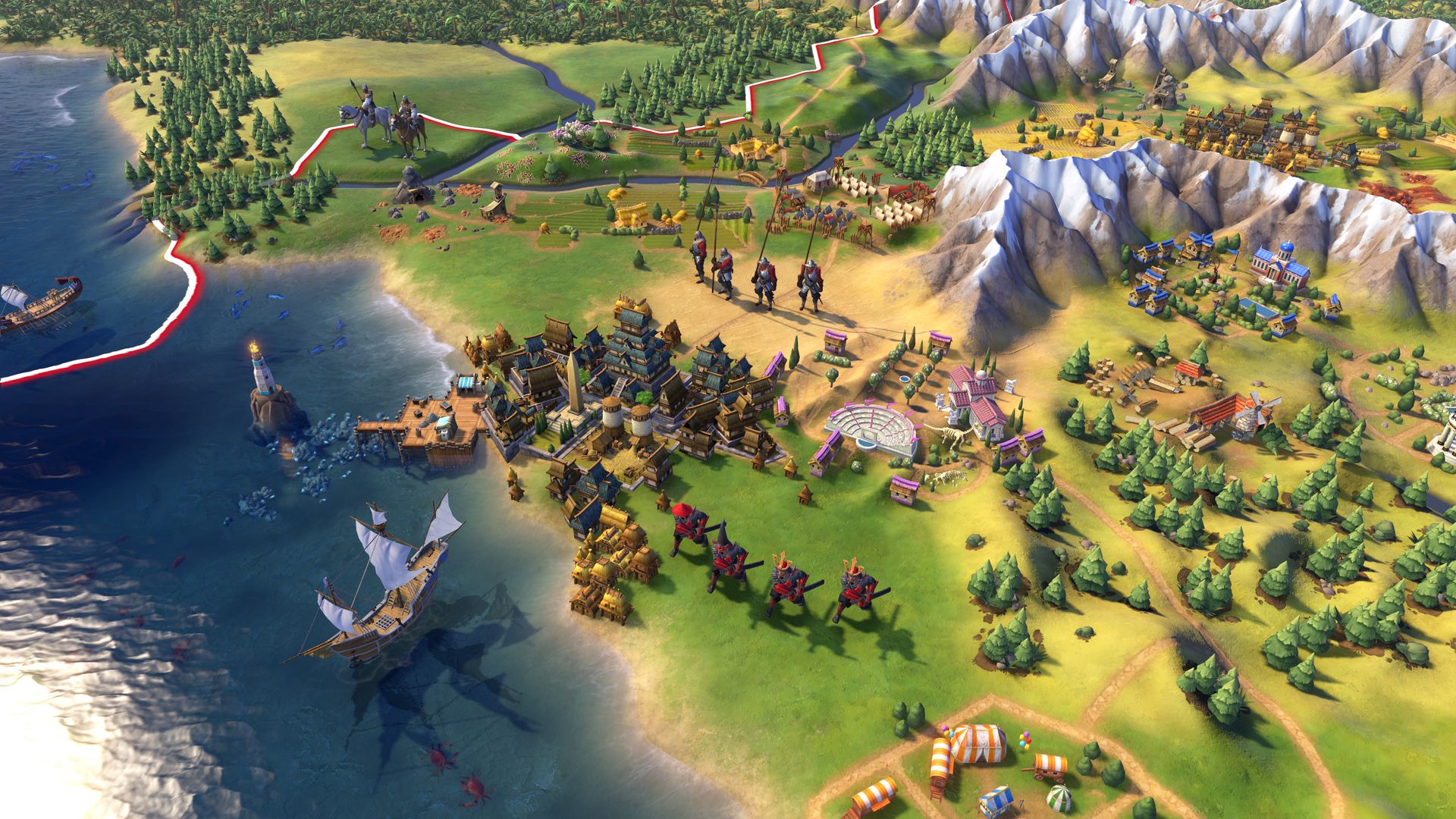 The revamped religion system is an interesting addition to the game. Religion is a two-step process in Civilization VI. Faith is a new resource that allows players to purchase religious units to convert enemy cities and conduct religious warfare. Early in the game, players will be able to found a Pantheon which lets players choose a bonus from a rather large pool. The pool is extremely well rounded and will serve any victory path well. The next step requires players to find a Great Prophet through the Great Person system or building the Stonehenge wonder. The Great Prophet will allow players to form their religion by selecting two bonuses from four different pools. Purchasing Apostles will open two more bonuses. The Apostle and Inquisitor religious units are aggressive units, but not in the traditional sense. Religious units can either spread their religion to cities a set number of time and can only attack each other. By essentially debating each other to death, the new religion system opens a second layer warfare that exists side by side with traditional military combat.

One of the most visible additions to the series is the new city district system. Cities can physically expand across multiple tiles by building specialized districts for things like faith or science. Many districts get bonuses on being positioned on or beside specific tiles, giving well placed cities a sizable advantage. In exchange, the builder system has been modified somewhat. Resource buildings are slightly less important now, so builders are now capped at three constructions before the unit is lost. 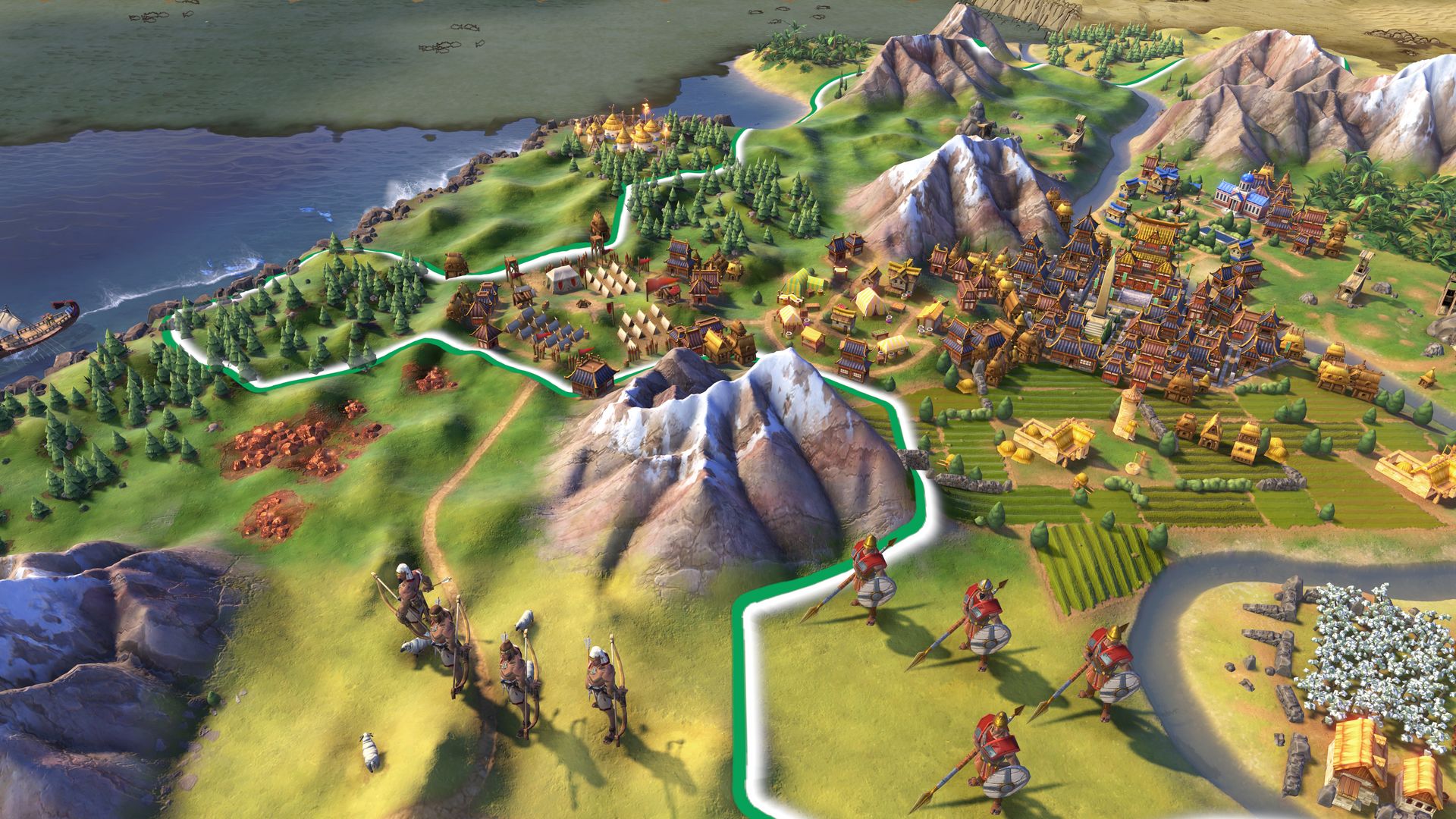 The introduction of the Great People system is almost like a bonus auction among all players. Great People grant some potent effects upon purchase or activation at a specific location. A variety of famous figures from history are available for purchase through Great Person points, city projects, and other bonuses. Only one of each Great Person can exist in a game and all players on the map can see the current pool of individuals available for purchase. All players can see the progress for each Great Person, opening some interesting options to disrupt their opponent’s plans. A player can choose to spend Gold or Faith to buy a particularly beneficial Great Person from under the nose of an enemy or attempt to bide their time in hopes of a better person will appear from the pool. I really like this system, as the open nature of each player’s progress adds a unique layer of strategy and diplomacy to the game.

Sid Meier’s Civilization VI makes some moves to lower the learning curve a little for players new to the 4X genre. Like every 4X title, an encyclopedia is included with the game that explains practically everything in the game; however, the encyclopedia is often way too hefty for new players to wade through. While it is well written and a search function is helpful, sometimes hands-on learning is the best way. The game provides many difficulty levels, but even the lowest difficulty level will pose a good challenge to new players or those particularly bad at 4X games. The advisor comes in two flavours, one that teaches all the basics of Civilization and one that brings players up to speed to the new changes. The advisor is quite unobtrusive as the game uses commentary from AI leaders to gently remind players about the player’s potential weaknesses. While Firaxis advertises a new tutorial system, it isn’t much different from other tutorial systems in 4X titles where an advisor will have a few words to say along with a suggestion to do some more reading in the encyclopedia. Civilization VI doesn’t conquer the Mount Everest of bringing down the 4X learning curve for new players, but the tutorial system is straight forward and flexible for players of different backgrounds. 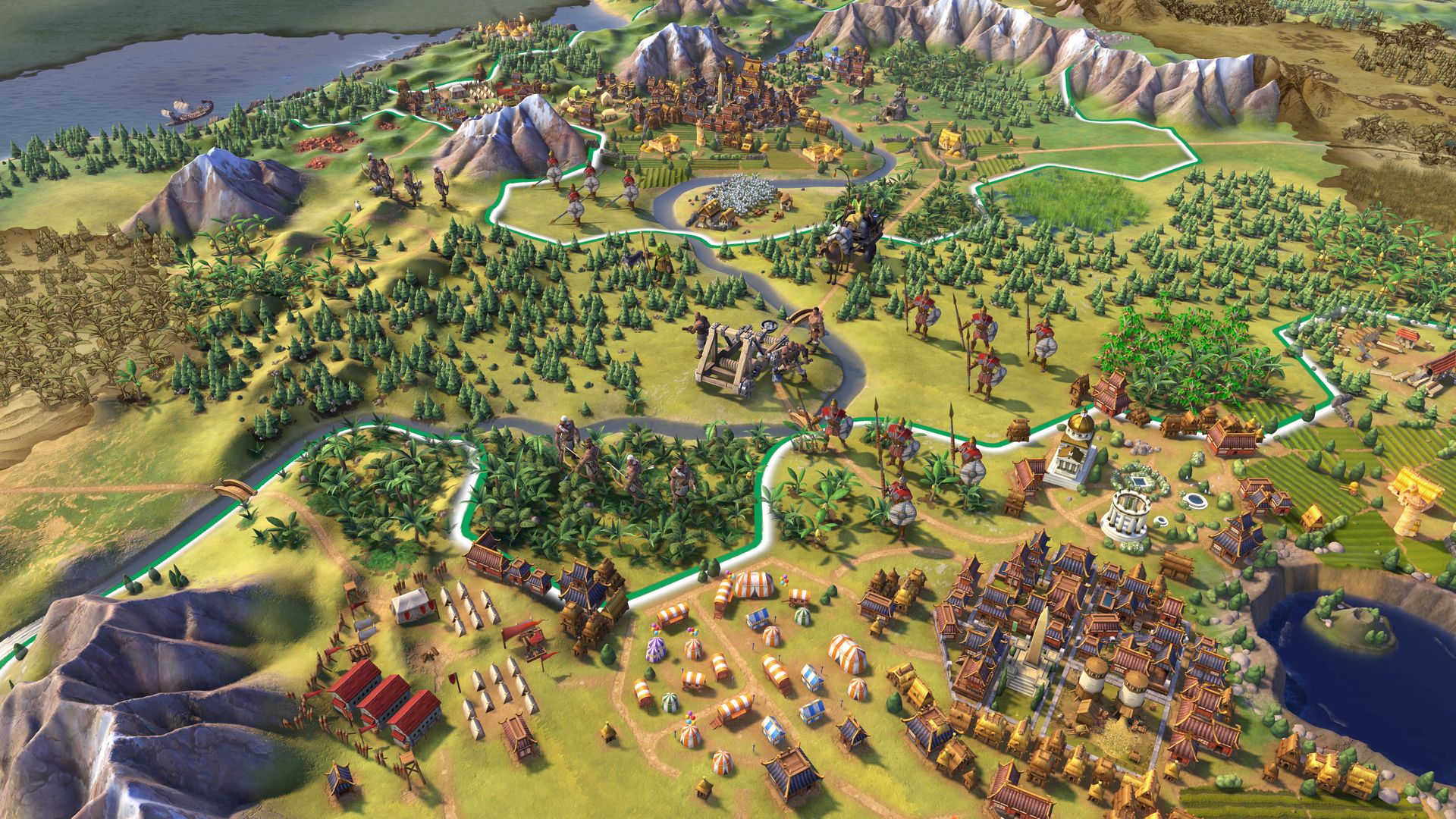 Sid Meier’s Civilization VI sports a slightly cartoony art style first seen in the series’ mobile titles. While the world map is very much a traditional Civilization art style with up to date graphics, the world leaders use the exaggerated, cartoon features. The style gives the game a more relaxed look than the very buttoned up Civilization V that I find very pleasing. On the technical side, there is plenty of options to tweak and I was pleasantly surprised to see a video benchmark tool.

The audio experience in Sid Meier’s Civilization VI is top notch. The sound effects and voice acting is solid. I like the fact that many of the leaders speak in their native language. The soundtrack is the star of the show. It strikes the perfect balance of being energetic and uplifting enough to keep players going for another turn, yet calm and relaxing enough to not be distracting. While composer Geoff Knorr did an excellent job scoring the game, the return of Christopher Tin for the game’s main theme blew me away. 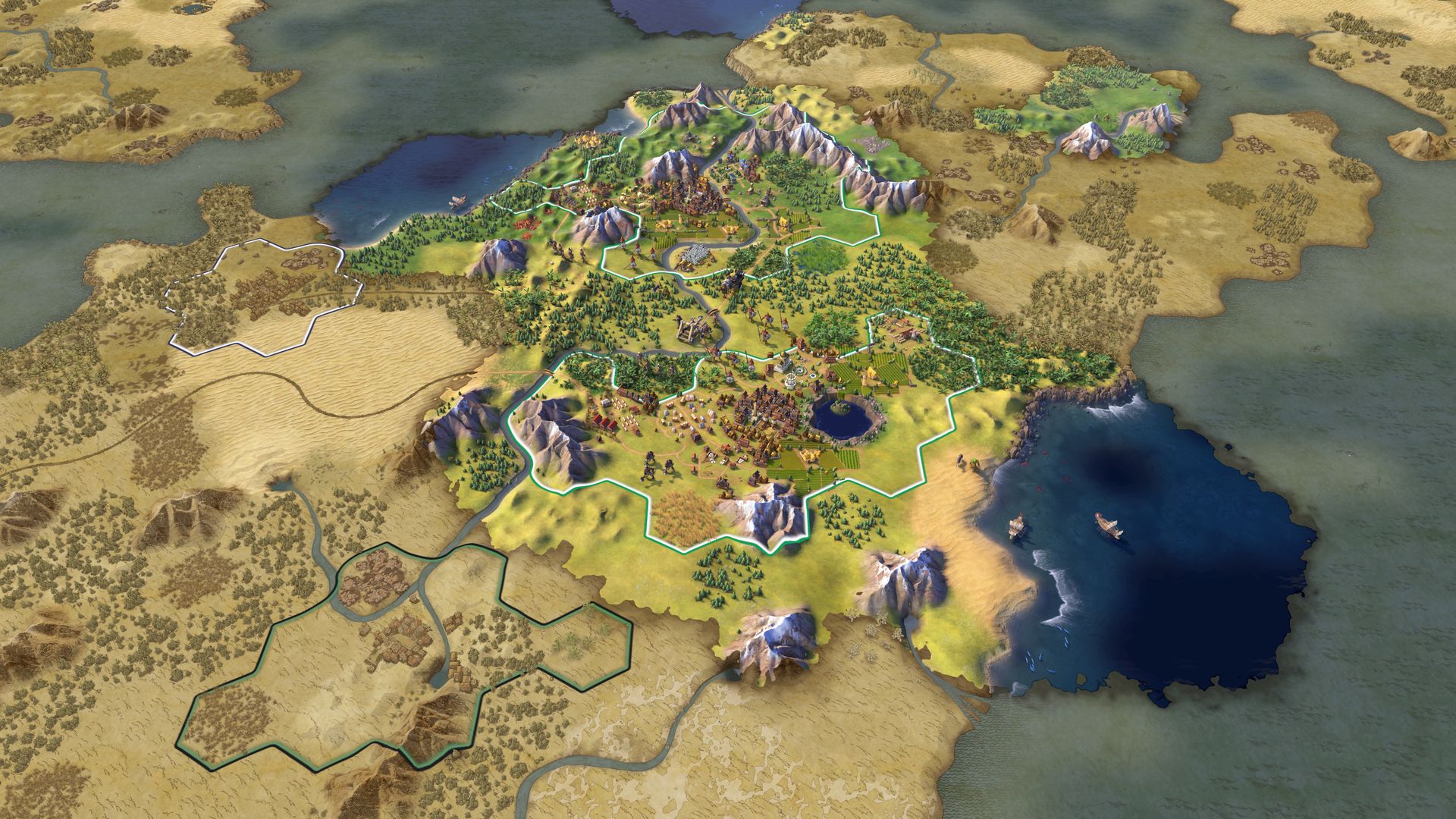 Sid Meier’s Civilization VI is another big shake up to the long running series. It maintains enough core mechanics to still be a Civilization title while introducing some new ones to add new layers of complexity and some modernization to the game. The four paths to victory create an intriguing dynamic between civilizations, especially with the addition of the religious victory. While it is still a bit of a steep learning curve for new players, Sid Meier’s Civilization VI will likely be the gold standard in 4X titles for years to come.