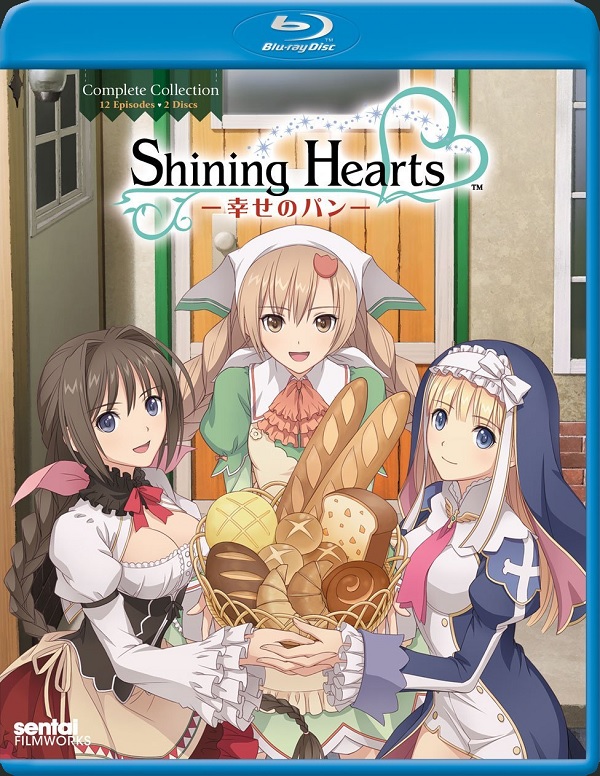 Overview
Anytime a franchise becomes popular, various spin-offs or adaptations of the franchise into other entertainment mediums occur. Video games are made into books, books into movies, etc. Nowhere is this more prominent than in the anime industry, where original series are uncommon and most anime adapt a light novel series, a manga, or a video game.

For over two decades, Sega has been releasing the Shining series in Japan with a couple of the titles making it to North America and since then, only two anime adaptations have been created. Now that Sentai Filmworks has brought the second anime series, Shining Hearts, to North America. Being the first product related to the Shining franchise released in English in over six years does the Shining series make a triumphant return to the West?

Story
In the land of Windaria, all kinds of people have gathered together in one place. While populated primarily by humans, Elves live in a nearby forest, members of the beast race work throughout the city and even a dwarf lives in the town. This assortment of random elements can be attributed to the fact that the Windaria has seen quite a number of oddities wash up on its shores over the years, including a man named Rick. 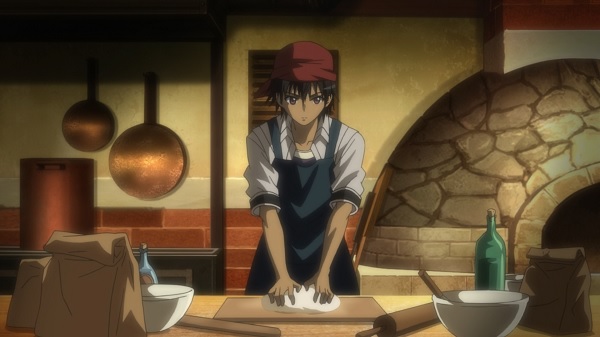 Rick is one of many “Drifters” who have washed up on the beach but unlike many others, he has recollection of his past. Lacking any memory, he is taken in by the three girls, Amil, Airy, and Neris who found him that day. While these three girls may have found him washed up with armor and a sword, he has since become a baker working with the three girls at Le Couer. After finding out that he is actually quite a talented baker, he learns more techniques from an elderly woman named Madera who is well known in the land and also talented at baking.

Rick has grown accustomed to his new life as a baker and is more than happy to live out his days with the three girls and interact with the rest of the townsfolk, not caring about his former life. However when another Drifter appears, this time a woman named Kaguya, shades of what Rick’s past life begin to appear. Or at least they would if Shining Hearts had much in the way of an actual story. 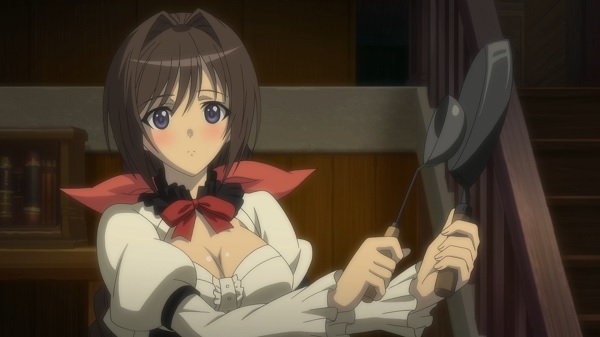 Shining Hearts is a perfect example of what can happen when someone attempts to adapt something into an anime which ultimately goes nowhere, serving as something of a terrible commercial for the original product in hopes viewers buy the product after seeing the series. I say this because there is a lot of potential to be found in Shining Hearts and much of it is presented to viewers throughout the series’ runtime.

Thanks to the nature of the bakery and the popularity of Rick and the girls, the four of them spend quite some time interacting with other townsfolk, including clearly special characters in the form of a catgirl named Xiao-Mei, the dwarven smith Hank and his mysterious female Automaton he tries to keep under wraps, members of the palace staff including the rulers of the island, and even a familiar face in the form of Elwyn from past Shining series. 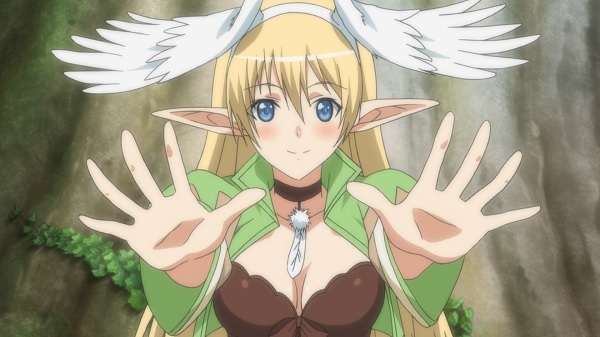 However despite spending quite a bit of time introducing us to each of these characters and exploring their characters a bit, nothing is ever delved further than skin deep until the series attempts to find some sort of conclusion in the last couple of episodes, however it fails even then. While the first half of the series serves as a way to introduce everything in the world and also reveal some details about each of the main cast, it at least saw the characters interacting with one another in a slice-of-life fashion as they tackle the minor obstacles placed in front of them.

If Shining Hearts continued in this form, it might have been somewhat passible as a simple and relaxing slice-of-life anime involving an amnesiac baker interacting with various fantasy races and living his life with three women. However by adding numerous mysteries to the mix, spending time on superfluous characters that serve no purpose in the series’ running time, there is little time to actually try and resolve anything or answer any of the questions brought up throughout the series. 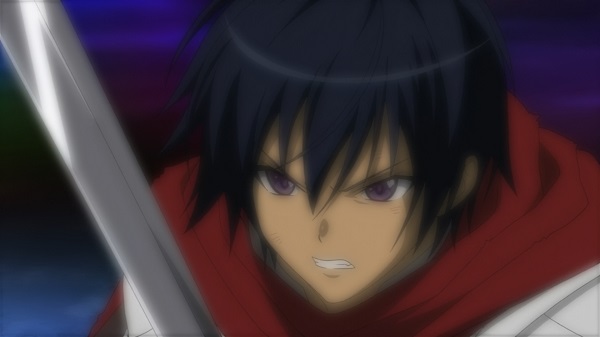 Even when the series then tries to force the answers to these various questions on the viewer, it is done so poorly that when everything is said and done, the whole experience feels superfluous. By trying to cash in on both the fans of slice-of-life series and those who prefer mystery and action, Shining Hearts ultimately ends up being a hodgepodge of ideas that will please no one. While the aforementioned slice-of-life aspect is done in a decent enough manner to be enjoyable as the characters meet each other and interact with one another, not developing any character, even the main cast, beyond surface level and barely looking into any story detail will leave viewers scratching their heads as the final episode airs, wondering what the entire series was supposed to be about.

Visuals
Anime viewers who are familiar with a certain artist may feel like they recognize the art style used to design the various main characters, especially the female cast, of Shining Hearts and for good reason. Many of the main characters have been created by Tony Taka, a well-known artist. His designs are superb and the various characters viewers encounter throughout the series are all noteworthy for their appearance. 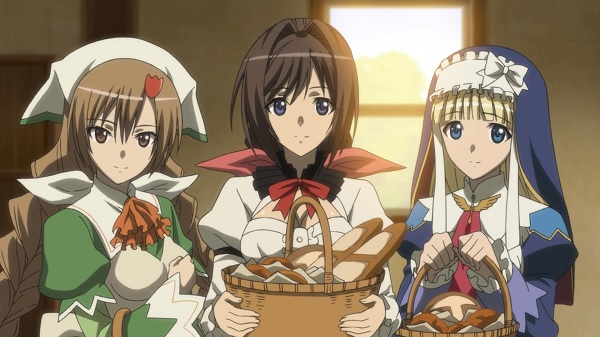 This impressive artwork transfers over to the world itself since, while numerous backgrounds and scenes are re-used, the land of Windaria is gorgeous. Thanks to a wide-ranging color palette everything feels natural and nothing in the series feels simplistic or an easy cash-in. If there is anything to complain about, it may be that some of Tony’s character designs may be a bit out of place considering the roles the three girls play in the series, something which is highlighted in an accompanying special feature.

Audio
Interestingly enough, Sentai Filmworks has given Shining Hearts an English dub to accompany the original Japanese voice work. The English cast is suitable enough for the roles, though there are numerous times throughout the series that the dialogue feels stiffly delivered by nearly everyone involved, making some of the character interactions rough to watch in English. 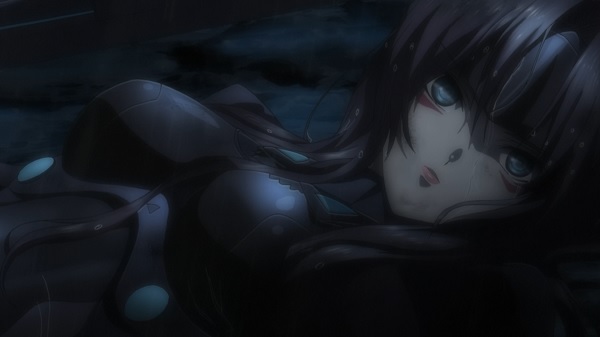 As far as the soundtrack goes, the background tracks are your standard fare for a series in a fantasy setting, though there are a couple of noteworthy insert songs. The opening theme for Shining Hearts is “Toki Sekai” while the ending is “Fuwaffuwa no Mahou.” Both of these songs are sung by the Japanese voice actresses of Airy, Amil and Neris and while the opening is generic, the ending theme is very happy-go-lucky and cheerful.

Extras
Alongside the standard bonus features of a clean version of the anime’s opening and ending theme as well as trailers for other Sentai Filmworks releases, Shining Hearts also comes with two extra bonus feature collections, both of which give viewers a chance to spend more time with the characters. 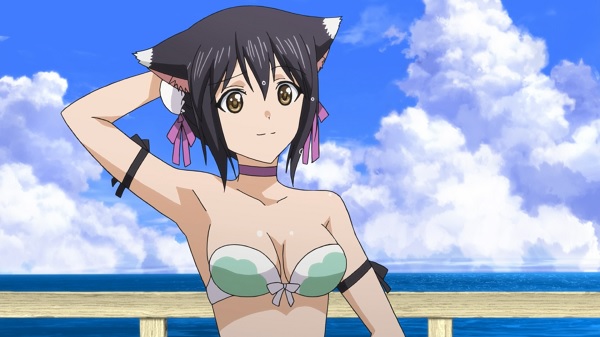 The first collection is the “Le Coeur Travelogue” which is surprisingly dubbed in English, I say surprisingly since usually bonus features are not presented with an English dub. This set of extras offers viewers some short mini-episodes which mostly involve the cast getting involved in humorous situations while in mostly in chibi form, though some mild fan-service can be found here. The second is the ‘Expressing my Heart Shining Hearts Picture Dramas’ set which is only offered in Japanese and gives viewers a short time with each of the female characters as they expand a bit upon their feelings throughout the series.

Overall
Shining Hearts had a lot of potential from the start thanks to some amazing looking character designs and an entertaining cast of characters. However this potential is squandered due to the fact that the writers seeming to believe that they had at least twice as many episodes to work with than what is found in Shining Hearts. While the slice-of-life events in the first half may have been rather plain, they at least felt relaxing and provided a nice change of pace. Unfortunately these disappear once the tangle of plot points is introduced and left abandoned like stale bread.