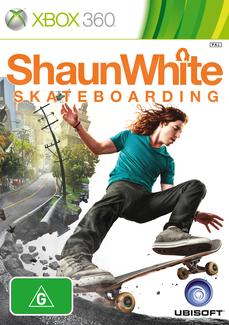 Shaun White Skateboarding sets to take the genre in a different direction with a blending of elements, instead of following the leader (Skate) developer Ubisoft Montreal decided to go its own way and create a unique skating experience.  Now that the Tony Hawk franchise is out of the limelight, the timing is perfect for this franchise to cement itself as a key player. The question is can they pull it off?

It’s expected that extreme sports games such as this one aren’t overly dependent on their story, however Shaun White’s skateboarding attempts to set the scene and reference skateboarding culture in a, let’s just say… special kind of way.

Shaun White (pro snowboarder and skateboarder) is basically public enemy number 1 to the monolithic government organization in the game, which has extracted the colour out of life with its conformity. As a result the cities have been turned into icy structures and citizens are in zombie style state.

Once you create your character it’s basically your job to put colour back in the world with skating using “flow” and essentially, save Shaun White from imprisonment using skate tricks and create your very own skate utopia. Sounds sort of over the top, right? Well it is an “extreme” sports game I suppose so it can be forgiven, also the reminiscent themes of Jet Set Radio give the game some charm with its wacky ideas. However the Utopian themed story drives the gameplay in Shaun White and this fluff ultimately spread across to the quality of the mechanics. 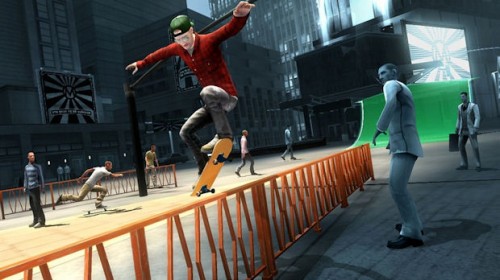 Magical Powers and Air Skating, these are some of the crazy ideas Shaun White’s skateboarding tries to implement, and kudos to UBISOFT for trying something completely different in the genre. You not only put colour back into the environments, other tasks include influencing people out of their zombie daze, taking down zeppelins as well as security cameras to fight off the establishments influence.

Environment is king in Shaun White’s skateboarding, which just happens to change based on your skating tricks. A little gauge called the “flow gauge” builds as you perform tricks, once it’s maxed out you can perform moves off a marked location and you’ll magically create a building, amongst other shenanigans.

The changes you create through the game basically become a symbol for your progress in the environment, once you’ve completed enough you’ll unlock a new area. In this sense the game isn’t exactly different to other offerings in the genre, however once you’re able to perform air skating and use the custom rail creator the realization of the quirkiness becomes quite apparent.

Other than the awesome and rather random magical powers that Shaun White’s skateboarding provides, especially once you’re able to create rails to grind out of thin air, the game doesn’t offer anything substantial to encourage progress. 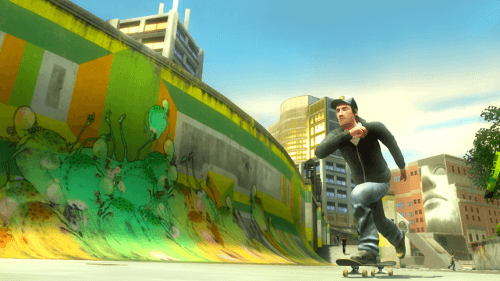 The controls and their simplicity is where the games bland experience stems from, left analogue stick to move and right stick dedicated to Tricks/Ollie’s, like that hasn’t been done before. You can unlock more tricks later on but that doesn’t add the sort of depth that other games do. You can ride around trying your hardest to show off and muck around, but you’re just as likely to repeat the same tricks as you’re to do something cool.

As mentioned earlier, environment is king in Shaun White’s Skateboarding and unfortunately that’s another area where the game tends to let the player down, the problem is they weren’t interesting enough to explore. Repetitious mission objects also plague the experience, however side challenges tend to be more enjoyable, which is an odd but appreciated element.

If you’re looking for a different take on the Skating genre and possibly decent multi-player (goodluck finding a game) then Shaun White’s your man. Overall Shaun White’s Skateboarding is full of some great ideas, but the level design and repetitious elements jarring the experience make for a sometimes-enjoyable yet bland game. Here’s hoping a sequel can fix the potential this franchise has.

Mediocrity is the word that comes to mind when gazing upon this game, considering this game lets you put “colour into the world” and make changes to the environment, one should assume vibrancy and style is paramount to the visuals. Apparently not, the art design is fairly basic and unappealing in the HD era, not to mention butt loads of advertising across the board. Videogames, much like movies are about escaping reality, the last thing you want to cop is an eye full of advertising, we take in enough of that all day (so much for sticking it to the man) Taking that into account along with the average models and laughable support characters including inconsistent animation, it seems that this skating game and its environment have been hit with the ugly pixel stick.

Skating games generally come with decent soundtracks; everyone remembers Tony hawk’s effort… Well I do anyway. Shaun White is the same, minus the well-known artists. The voice acting is either love or hate, personally I found it quite annoying and the sound effects neither impressed nor disappointed. However the sound of a skateboarder stacking it is almost non-existent, whether this was intentional or un-intentional because of the games forgiving physics system is hard to say. Crowd chatter was also a highlight with some good lines from citizens, but in the end graphics/sound was a mixed bag.

I enjoyed Shaun White’s Skateboarding to some degree, judging from this review you could say otherwise, but it does bring a certain wacky charm to the saturated market of skateboarding games. The irony here is that the game is about saving Shaun White and a colourless world from its rulers, which just happens to be the same problem the game itself sometimes suffers from: an uninspired execution of interesting ideas, which often makes for a bland and colourless gaming experience.