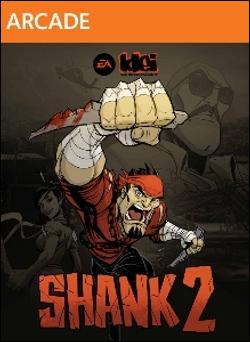 Shank 2 is a side-scrolling beat-em-up game from developers Klei Entertainment. It is an incredibly fun game that has an art-style that reminded me of classic cartoons, like Samurai Jack. The best way to describe this game would be that it’s Ninja Gaiden (The 3D ones) meets Metal Slug. The entertainment gained from this game is on those levels.

Shank 2 is a tale of a mercenary like character who is traveling via bus through a war-torn country. His travels are quickly interrupted by bad-guys who seem to run half the country.

As a side-scrolling game, there isn’t too much of a story, and what there is of one is enough to drive you between segments of the game. Usually, the story has you reacting to events that have just taken place within the story, for instance at the end of one level an old friend of the main characters is kidnapped and this drives the story forward, giving the player motivation to continue on to the next level. 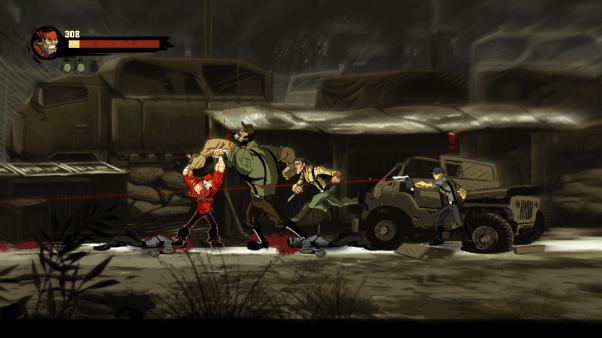 What I really liked about the story was the use of FMVs, each one being animated in a cartoon-like manner, giving the games story a very unique feeling to it. Further these videos blended in so well to the games visual style that you essentially felt like what you were doing was continuing the cartoon while you were playing.

Shank 2 is, at its core, a two-dimensional side-scrolling game that is very reminiscent of both Ninja Gaiden and Metal Slug. The action in the game is very Ninja Gaiden it’s level of gore and combat, while having that metal Slug sense of humour to carry it along.

During the course of the level, you will have three weapons available to you use for different purposes. The first is a fast close-range weapon designed to build up multiple hits over a short period, the second is a larger close-range weapon designed to deal in heavy damage and the third weapon is a ranged weapon designed to attack enemies from a distance or to build up combo modifiers between attacks. This is where the game begins to feel very Ninja Gaiden. I actually found myself utilising similar tactics that I would have used while playing Ninja Gaiden in this game. That is, quick attacks and ranged attacks to buyild up the damage and keeping the combo up while moving around to get a better hit with my heavier weapon. 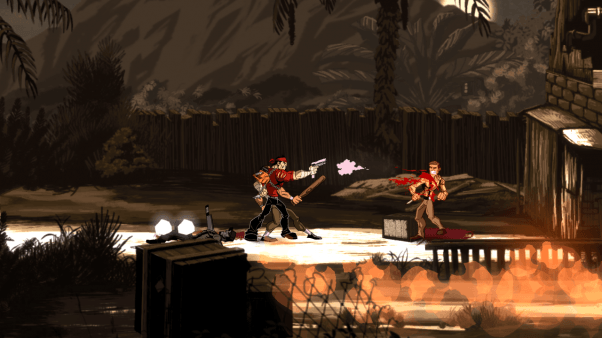 What’s a little action without a little variety? Shank 2 is definitely a game that delivers on this concept. Over the course of the campaign mode of the game, you will unlock access to various new pieces of equipment to better aid you in your carnage. Mixing and matching your loadout, I found, was the key to achieving the best possible score on a level while also ensuring your own survivability.

Other than the campaign, there are a plethora of other gametypes available that are survival or score based in nature. These are quite fun to play through and certainly add a great level of replay and competitive value to the game. What makes these even better is adding friends to the mix, competing for scores and the like makes this a lot more fun to play than it already is.

Shank 2 has a very cartoon-like appearance, that almost immediately reminded me of Gennedy Tartakovskys cartoons, like Samurai Jack. The animation wasn’t lifted from sorts of cartoons, but I felt the same kind of resonance between this game and those works. So if you’re a fan of that particular animation style, you will probably fall in love with this game visually. 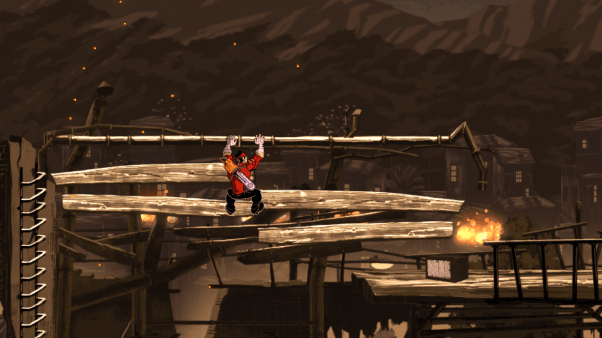 Throughout the game, I noticed that (what looked like) 100% of the games gameplay assets were drawn, either by hand or by hand through a computer drawing pad of some kind. This means that the levels and the assets scattered around them all blended together really nicely and that there wasn’t the same kind of graphical bugs that one might find in a 3D game, such as clipping errors or the like. All of this means that the game not only looked better, but also carried a much better presentational value across the entirety of the game.

What people will find most entertaining though, is the Ninja Gaiden-esque levels of blood spatter whenever you hit some poor goon. Unlike Ninja Gaiden though, the blood doesn’t sticky to the level (or at least I didn’t notice it doing this), but that does not get in the way of the hilarity of some of the stuff that happens. Very early on in the game there is this part where you have to fight these larger enemies near a meat grinder and, as you can probably guess, the visuals can become quite hilarious depending on how you tackle the situation. 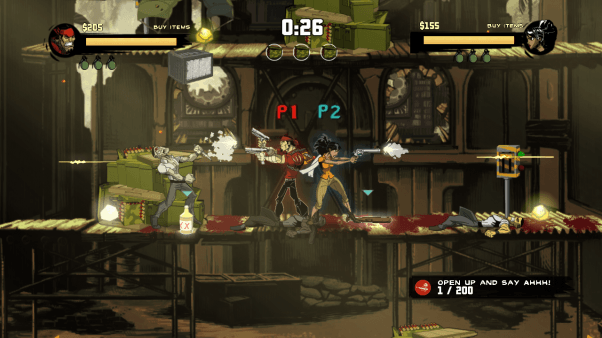 Now I’ve talked about Full Motion Videos briefly earlier on in this wall of text, but I’d like to go into them further here. Visually speaking, these Full Motion Videos are incredibly well drawn and animated. I could seriously see a Shank cartoon being animated at some point, and if it carried this level of visual fidelity through it, it could be wildly successful. Not only were the videos fluid and well drawn, but they were also very dynamic and impactful. They also gave you a sense of accomplishment and a sense of a role in the games storyline that some games seem to miss.

Audibly, this game has a very decent soundtrack with some sound effects that easily represent whatever it is that they’re supposed to be representing. The guns sound gun-like, the knives sound knife-like and the chainsaw sounds chainsaw-like. 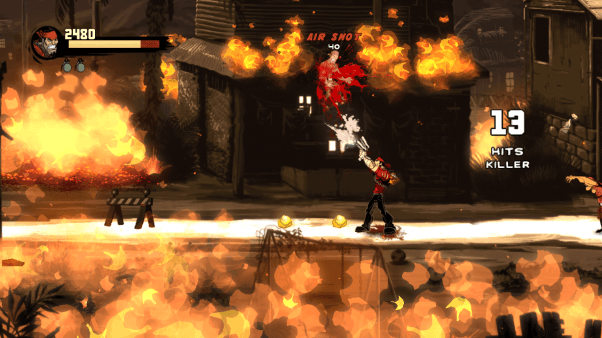 What works even better is when these are all blended together while you’re playing, it makes this game even more fun than it would be just watching the visuals alone. This is definitely a game where the experience is heightened by keeping the volume levels up and your own music off. At the very least, for your first playthrough or so.

Shank 2 is easily one of the most funnest experiences I’ve had with a side-scrolling beat-em-up style game in a while. It’s blend of cartoonish visual styles with dynamic and fun gameplay styles, as well as it’s insane sense of humour, gives it this incredibly fun presentation that should you keep you coming back for more and more action. I’d most definitely advise gamers everywhere to pick this up on their system of choice should they be looking for something play at any point in their lives.