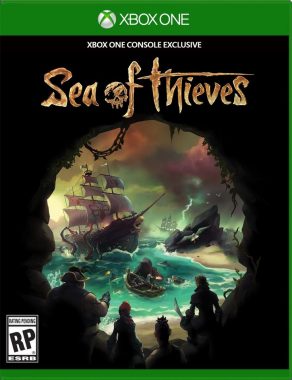 After gamers were given a fresh taste of playing as a pirate five years ago, many wondered just when we would see a larger developer produce a title focused solely as playing as a scoundrel on the seas. Then Rare revealed that they were working on Sea of Thieves, a multiplayer game focused on giving players a chance to team up with friends and others to sail a vessel through treacherous oceans seeking gold and glory. Now that this game has finally made it to release, is it worth trying to become a legendary pirate?

After spending quite a bit of time working with the pirate creation randomizer to try and find one that fits your fancy, players will immediately be dropped into the open world of Sea of Thieves with plenty to learn as this game prefers to let players learn how everything in their inventory works through trial and error rather than force them to deal with a variety of tutorials. Many of these things are self explanatory such as cannon balls being used in cannons, planks for repairing your ship, bananas to “kronch” and restore health, while a few others have some secondary mechanics included that will help players solve riddles and face off against everything else in the world. 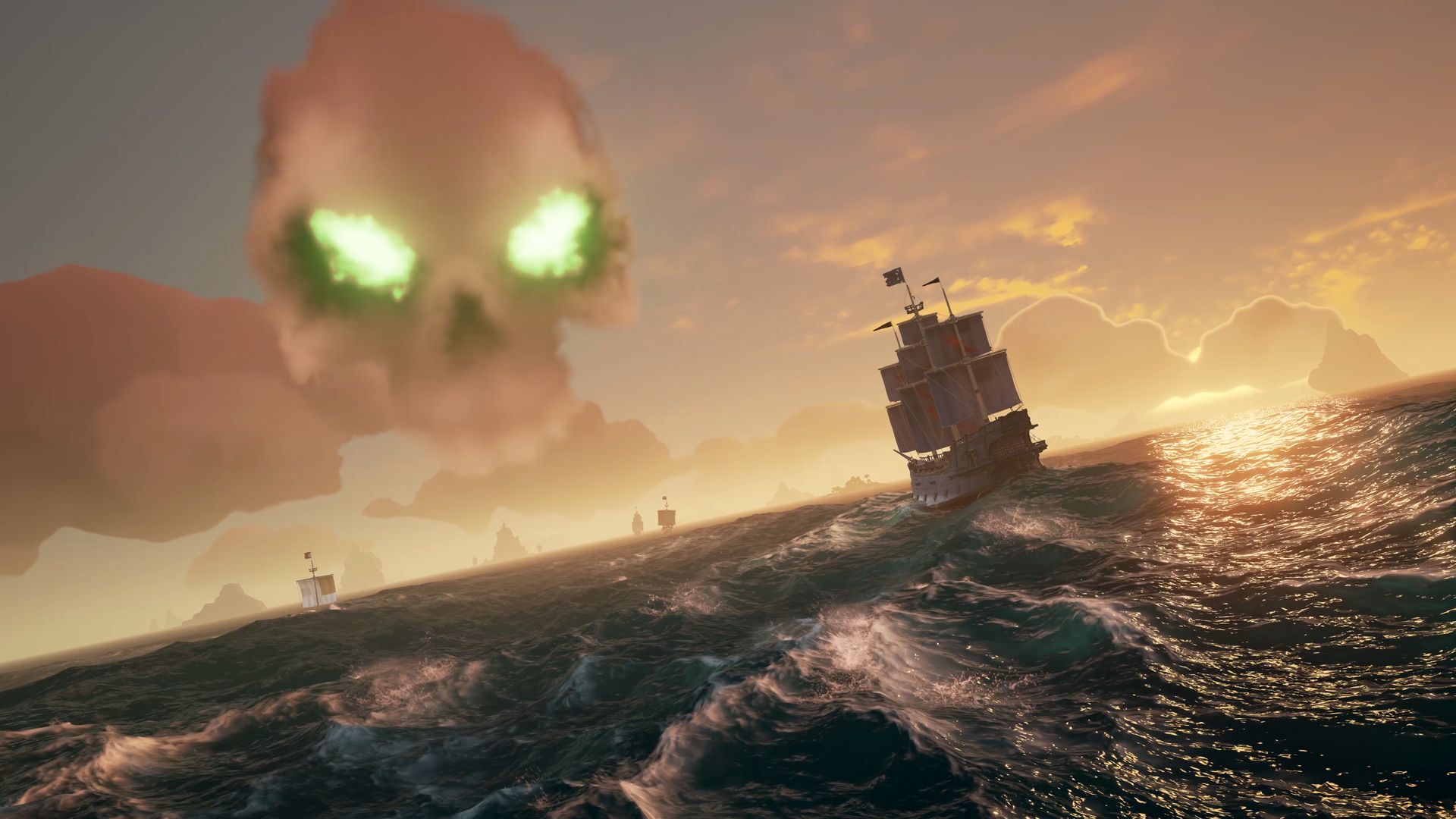 Once you set sail on a vessel of your choosing, be it a solo adventure or paired with another player on an agile sloop or attempting to take on controlling the larger and stronger, albeit more difficult to maneuver, galleon with a full crew of three to four players, the entire ocean is your playground. Sailing through the waves and working together with your crew make this title a magical feeling experience at times as each member takes on various tasks, be it using the map to help navigate to the next island location, keeping an eye out for rocks, land, and other vessels in the crow’s nest, steering the ship, or angling the sails to best catch the wind, everyone can play a part on a vessel.

Some of this magic is lost however if you happen to play solo or end up joining a crew who isn’t willing to talk with everyone else. While Sea of Thieves does provide plenty of in-game text options to communicate things such as directions, warnings, and even found objectives this game is at its best when everyone is willing to play together. In fact players can even self-manage if they feel like a crew member is attempting to ruin a voyage by voting them into the brig, though this can also be used to target unknowing players joining a random crew.

That being said, the journey upon the waves can lead to numerous surprises and adventures. Players can take voyages from three different clients located at each outpost, with the Merchants focusing on catching animals found on various islands in cages and delivering them to a specific port within a period of time, the Gold Hoarders eager to find buried treasure that mostly involves solving riddles or finding where the “X” on the map is located on an island, and the Order of Souls that pits the players against a horde of skeleton pirates who have been cursed to walk the earth with a handful of forms that all have various strengths and weaknesses to exploit while fighting them. 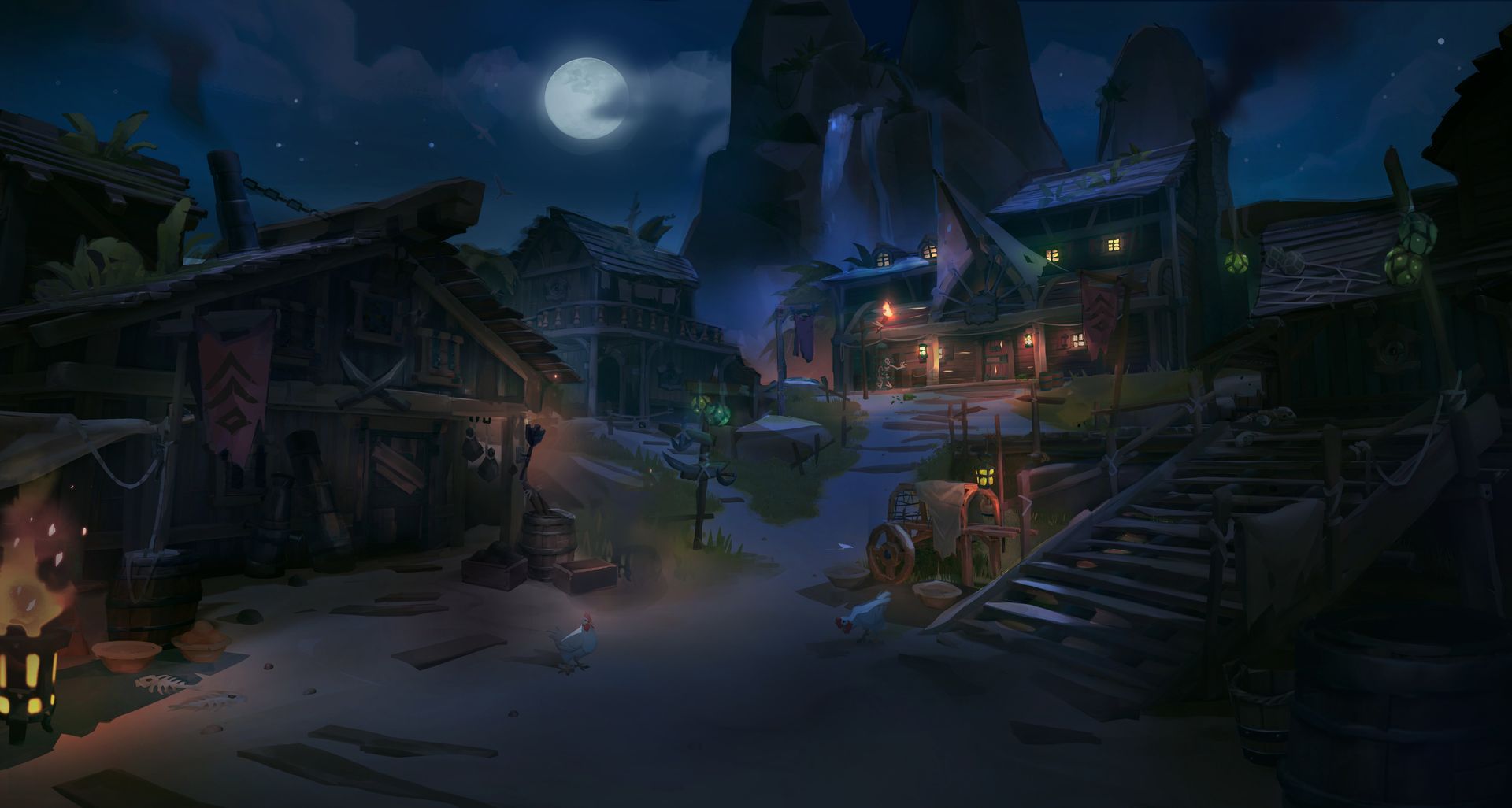 These voyages are simply the beginning of your journey though as your trip may lead to numerous discoveries along the way. Flocks of seagulls can hover over shipwrecks containing various treasures that can be sold to each faction, with gold and silver cups and trinkets as well as boxes of spices and silks also being available to sell at the Gold Hoarders and Merchants specifically. There may even be glints of light seen on an island leading to a message in a bottle that can lead to a random mission from any of the three missions, some of which are a bit more random than others such as having to deliver a gunpowder barrel or fill up a crate with a specific item.

Of course no voyage would be complete without danger and there is plenty to be worried about when sailing on the waves. Sailing into a vicious storm can not only send your compass spinning, forcing players to navigate by landmark alone and work directly with their navigator while others will need to focus on bailing water that fills the bottom of the boat due to heavy rainfall and patch up holes in the boat that are ripped open by the rough waves. That isn’t all however as other players can be more than ready to send you to the bottom of the ocean in the hope of taking any treasure you might have on board. Ship to ship combat works great and can really reward inventive players who take advantage of a “hand-break” style system that allows the use of the anchor to make sharp turns allowing you to get a quicker line with your cannons to try and sink the opposing ship. You can even load yourself into a cannon and fire yourself onto another ship if you feel risky or want to try and steal resources or flat out steal the ship and try to ram it into rocks if you go unnoticed. 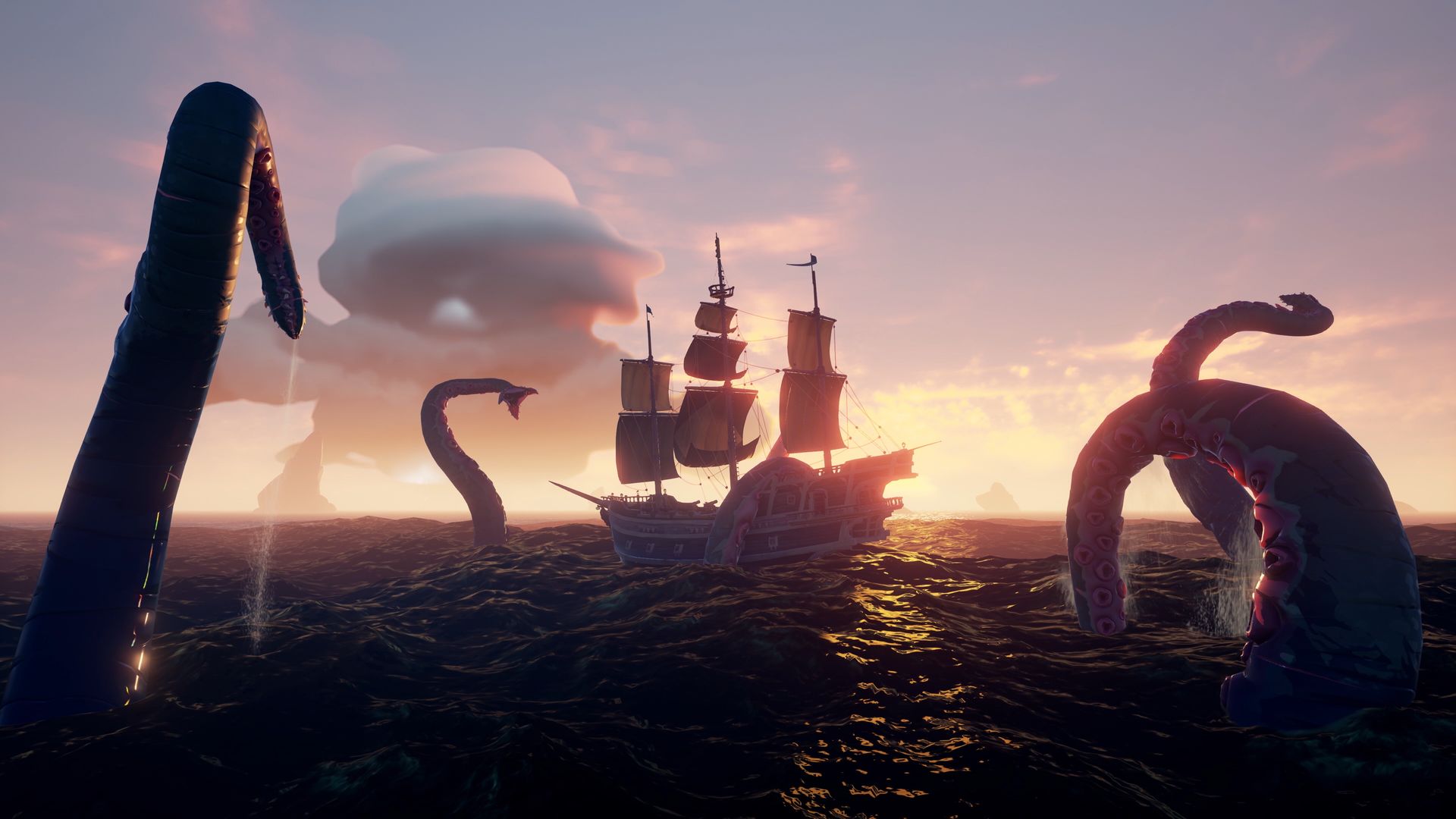 That being said, the way that the game’s death system and even respawning ships work does make some of the game’s combat a bit of a chore. When killed players are given a small amount of time to wait on a ghostly vessel before respawning on their ship while sunken ships are respawned only a few islands away with all of their resources restored. This can lead to some battles being an annoying war of attrition as others can simply wear down more prepared vessels simply by throwing themselves after them again and again, something that can be rather troublesome when focusing on the game’s biggest in-game event, Stronghold Raids. These long battles can last for quite some time and are extremely rewarding for those who complete it but as mentioned before, can be far more trouble than they might be worth for some.

The main focus of Sea of Thieves happens to be completing voyages for the three main factions by completing their voyages that tend to get a bit longer and usually more rewarding the higher your reputation is with them. Unfortunately there really isn’t too much beyond that and even the rewards for ranking up with these factions is rather basic in nature. Currently the only thing players can spend money on happen to be different clothing for their pirate to wear, new sails or hull designs for their ship or even an ornament on their prow, and different looking weapons. Unfortunately the weapons are all skins of the same three types of firearms meaning that one blunderbuss will perform the same as another and the fanciest “Eye of Reach” sniper rifle will work the same as the one with a cracked lens players get at the start. 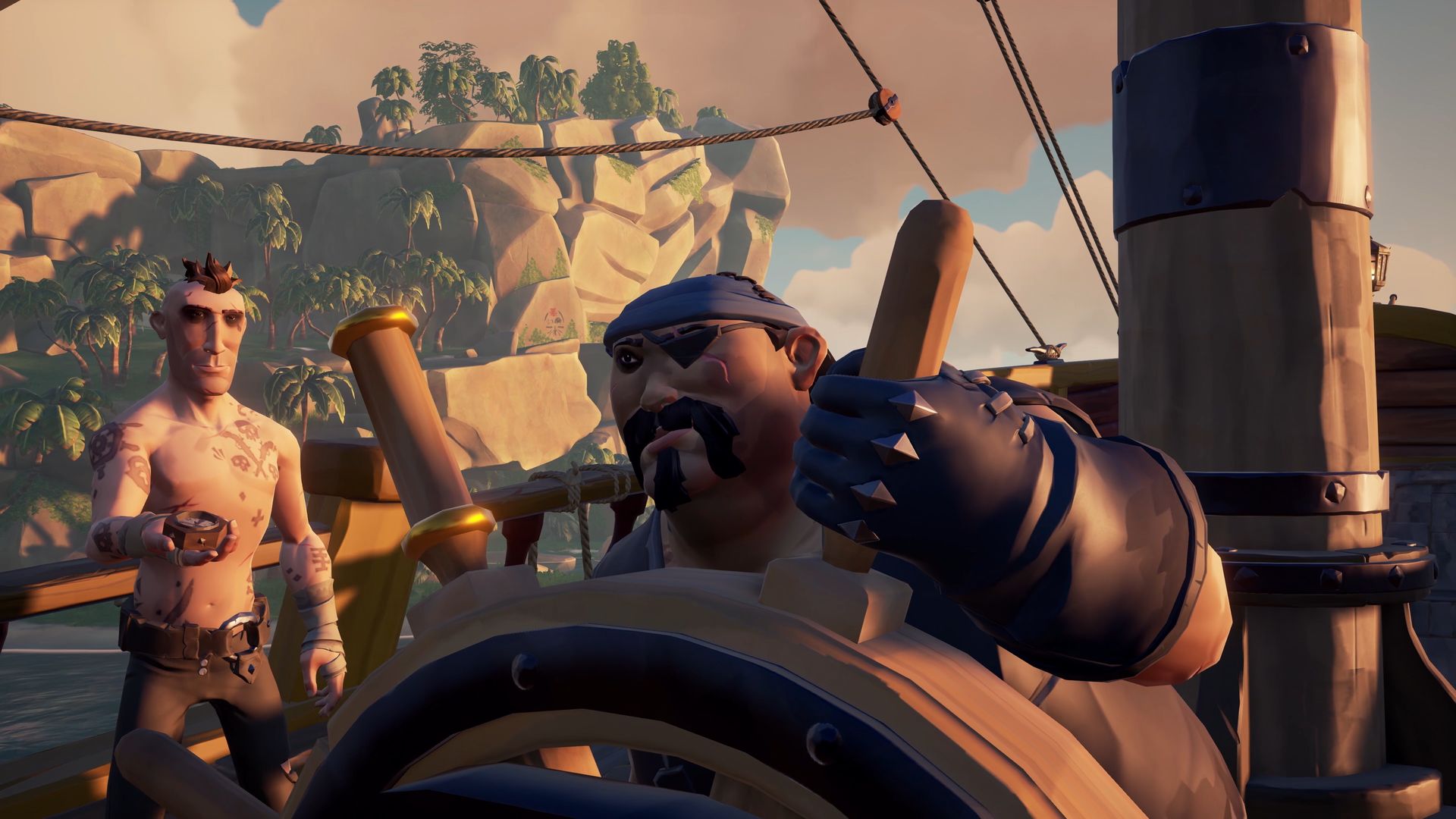 Even the land combat can be rather repetitive after a while as players are only given three firearms, a standard pistol, the blunderbuss that works as a shotgun, and the aforementioned sniper, to accompany their cutlass. Fighting with a cutlass lacks impact while players can only hold a few rounds at a time and must seek out ammo crates to reload. The skeletons you battle against can be a bit different at times since, as mentioned before, they can come in a variety of flavors such as having to reveal them with a lantern, rust their armor with water, or keeping them out of water to avoid them powering up, but thanks to the aforementioned combat issues these can be a bit boring after some time. Even the wildlife is fairly tame with snakes only being able to spit venom at players and sharks only being dangerous if you happen to be caught unaware or out of ammo.

Of course the Kraken can also be an issue but this threat is few and far between. In fact, even sailing off the map is treated as nothing more than a minor issue that the game will simply force you out of even if you manage to keep yourself afloat. Rather than forcing players to constantly struggle with a ship not meant for such seas the title will eventually just flat out spawn your crew and your ship at a new island.

These issues may tarnish the game but Sea of Thieves is at its best when played with friends and messing around on the open seas. Whether it is playing a random tune on some instruments or drinking to the point of vomiting all over one another all while trying to control the boat as best you can without running ashore, this game is at its best in small voyage doses to avoid being worn out by the current lack of depth found in these seas. 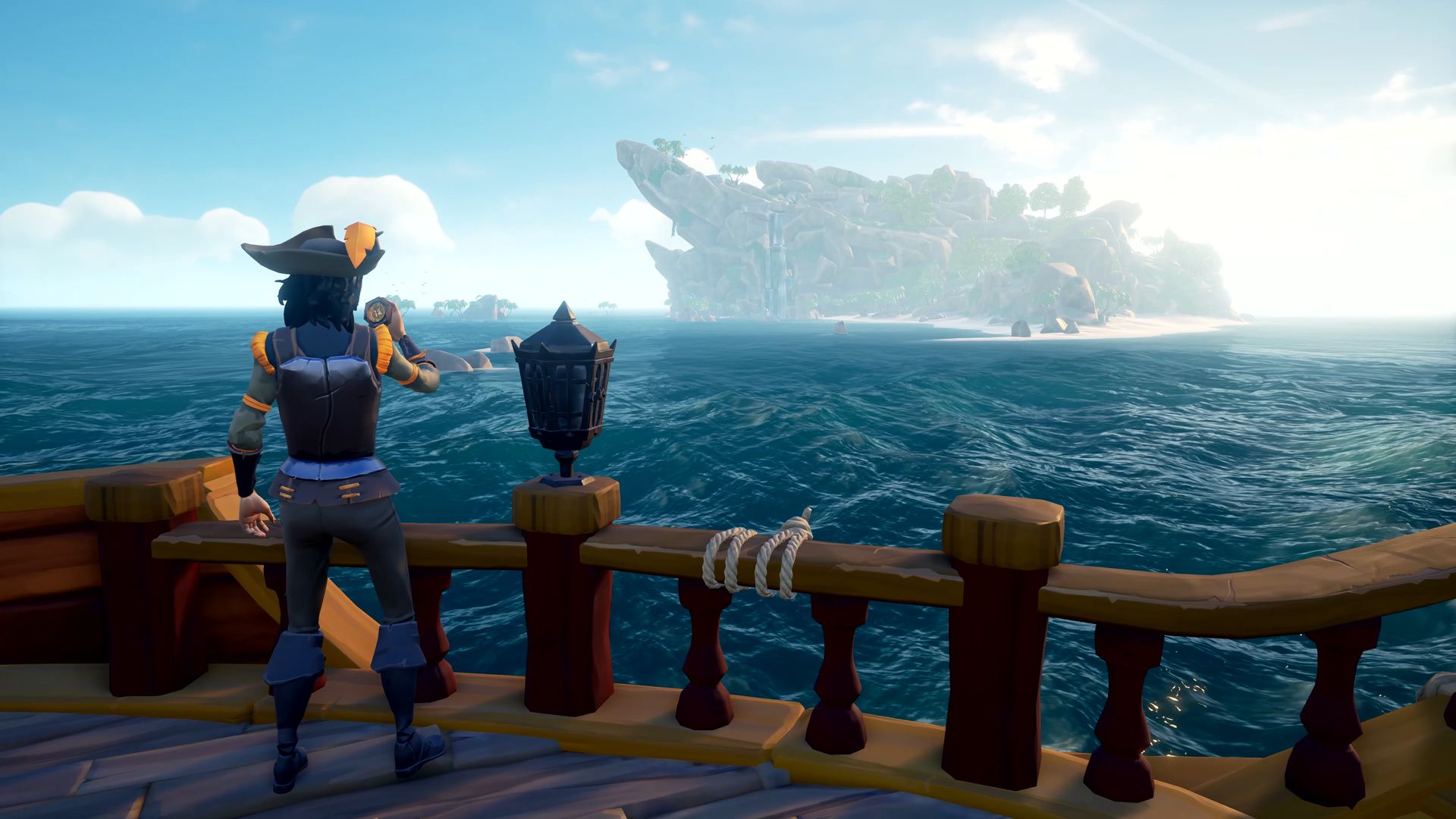 The first impression that players may get of Sea of Thieves may not be the greatest as the randomly generated pirates that you will need to spend time circulating through often don’t end up being the best looking bunch but once you step foot outside of the tavern and see the sea and all of the islands there are to explore, you’ll be immediately impressed with just how impressive the game can look with its cartoonish art style.

Thanks to a combination of great sound effects portraying the groans and creaks of a ship that is being piloted by a crew all handling sails as well as steering and the gorgeous looking oceans that can go from calm seas to raging waves with a wide array of colors and temperaments in between the two, players will get immediately immersed with the feeling of sailing these seas. It is worth noting that the amount of songs available for players to actually play in the game is rather small and the lack of “sea shanty” style music is disappointing, though it is a nice touch that playing music while drunk does make it sound worse. 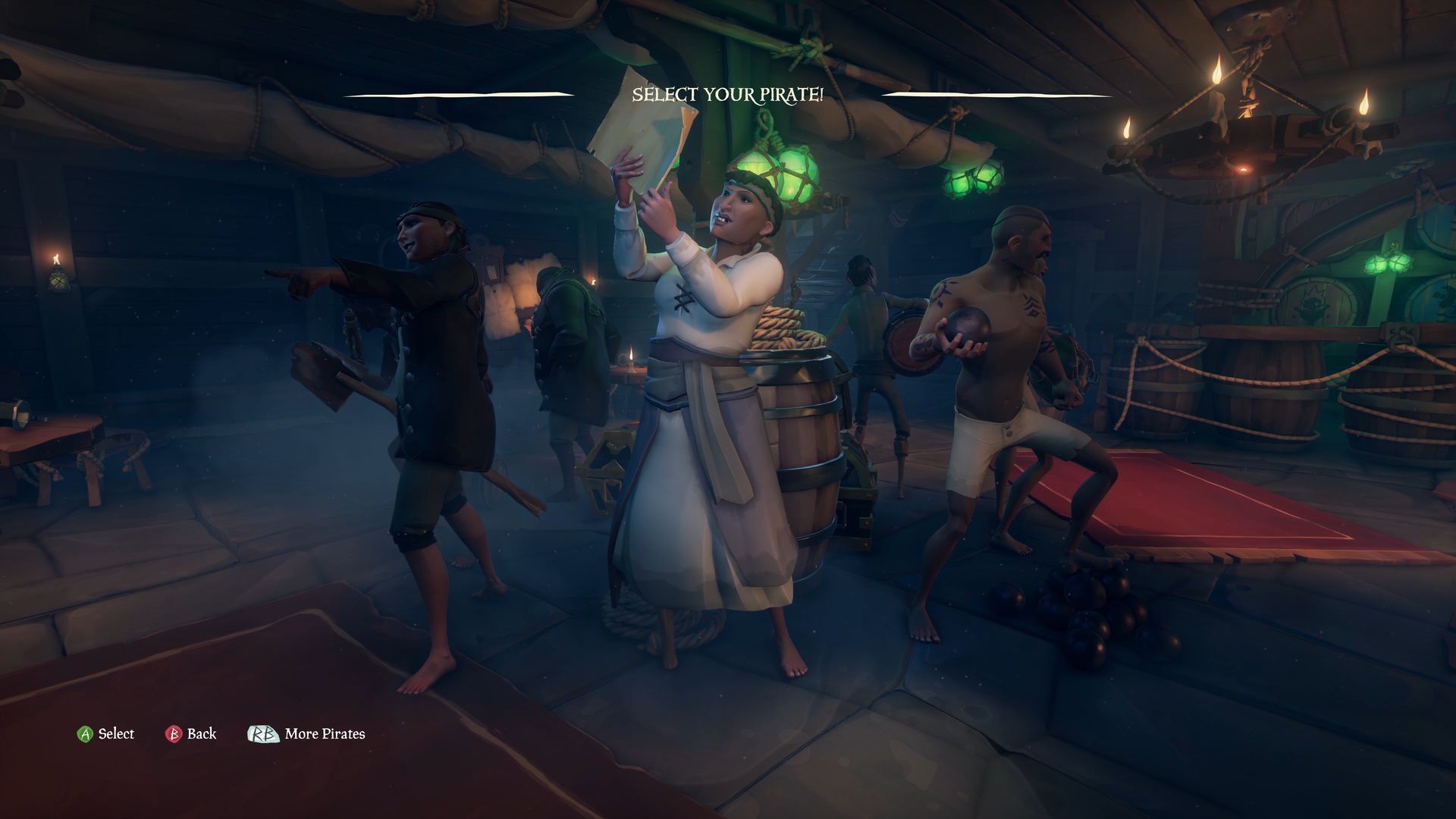 The repetition of some voyages and the long grind may be a damper on what is a rather fun experience in Sea of Thieves. Sailing the seas with your friends and even random players who want to cooperate makes for an engaging and highly enjoyable experience that can lead to numerous random adventures that quickly outshine some of the problems that tarnish this game. With the potential for new content being added and a sea full of new possibilities that could be included, there is a lot of hope for Sea of Thieves but be prepared for a grind.

Sea of Thieves is at its best when playing with friends but even working with cooperative randoms can lead to great adventures that can outshine the issues that tarnish the luster of this great feeling game that can hopefully be ironed out in the future.
7.5