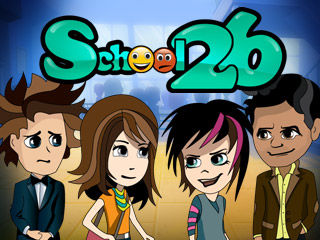 Kate is a normal teenager who is unfortunately yet inevitably saddled with less than normal parents. A pair of ‘nomadic spiritual healers’, they have dragged their daughter through no less than 25 different high schools in a quest to find a place with the right ‘energy’. Arriving at a nameless 26th school, Kate decides that this is to be her last. Luckily her parents agree that Kate can stay on at School 26 – but only if she makes friends!

It’s a simple set up that is dealt with in one opening screen. Starting at a new school is definitely something that everyone is familiar with, no matter whether it’s your first high school or your twenty sixth. A quick first meeting with a teacher throws Kate into a world populated by seven unique classmates who she must befriend by the end of the year – or else it’s on to school 27. 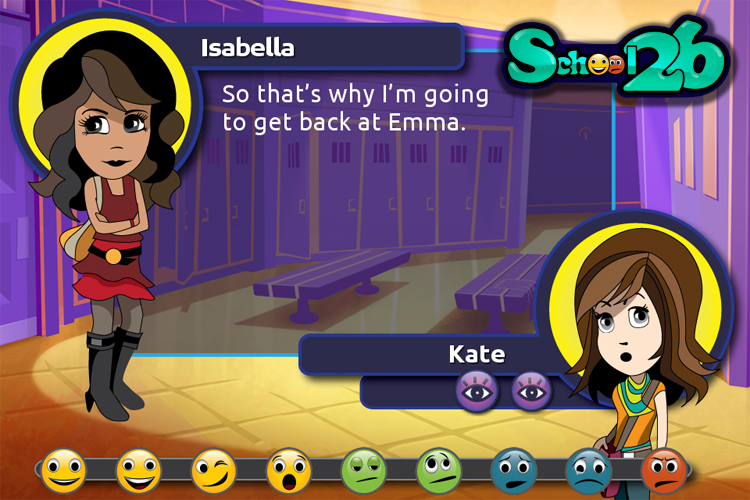 School 26 is a game only in a very loose sense. About 80% of gametime is spent chatting to the other characters, and the player can respond to what they say by clicking on one of nine emoticons ranging from angry to ecstatic. Character models reflect their emotions with expression and with colour – so the matching up necessary to befriend them is incredibly simplistic. Giving a suitable response builds relations with the character, and story lines gradually unfold as Kate gets to know her fellow classmates. Situations build up from simple school encounters to sleep overs, dances, and eventually: The Prom.

Kate’s locker acts as something of a hub throughout, housing dossiers on each character, a crystal ball to access conversations , Kate’s mobile phone and a computer that spouts personality quizzes. The mobile phone will receive text messages from characters throughout the game, and completing personality quizzes can build bonds with characters who get similar results or whose results you predict. I have to admit that including the personality quizzes is a genius move, as I certainly remember filling out a countless number of these  when, once upon a time, I was in the target age group for this game.

The endless teenage chat is also broken up by a Tarot card game that Kate can use to influence how people feel about her and each other. Thanks to her nutty parents Kate has some developing sensory powers of her own, so drawing cards from a deck to reach a particular goal can result in improved relationships. I found it a bit odd that in a title promoting empathy and social skills relationships could be influenced by a pack of cards, but it does provide a welcome break from all the conversation. It’s not one of those games that could survive outwith the context of the title though, so don’t expect to particularly look forward to playing it. 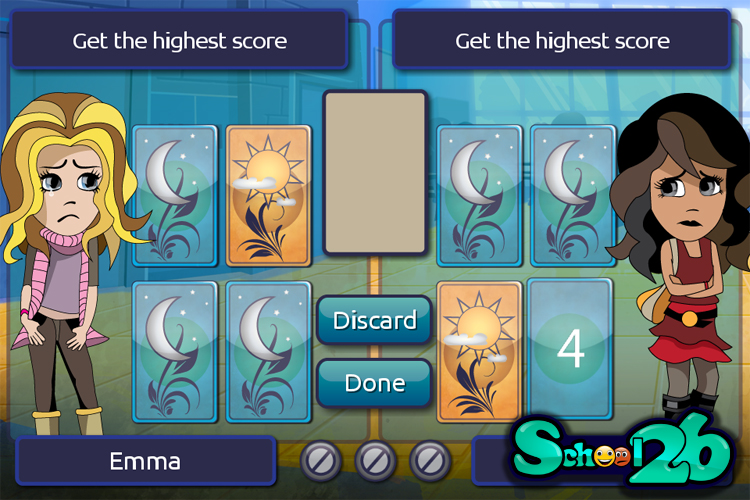 As far as building relationships go, School 26 is very simplistic and a little bit odd. Kate’s responses have little effect unless they’re the correct one, and there are an awful lot of circumstances where repeatedly making a shocked face :O will make people like you. Teaching empathy is an admirable goal, but there’s a fine line between being sympathetic to other people and being a complete sycophant: ultimately the game rewards you more for nodding along than having your own voice. It’s understandably limited by it’s technical simplicity, but when Kate can laugh in the face of someone who is divulging their darkest secret and not get any negative response, there’s something wrong. Similarly being annoyed by some truly terrible pick up lines has no effect at all – everything just carries on regardless.

This all reflects the linearity and general lack of exploration in the game. Kate can’t explore the school freely and choose who to talk to when, but must follow a set list of conversations and constantly report back to her locker to proceed. Such limited scope would sit fine on iOS (for which the game was originally built), but on PC the game is just lacking in content – especially when the current asking price is so high. 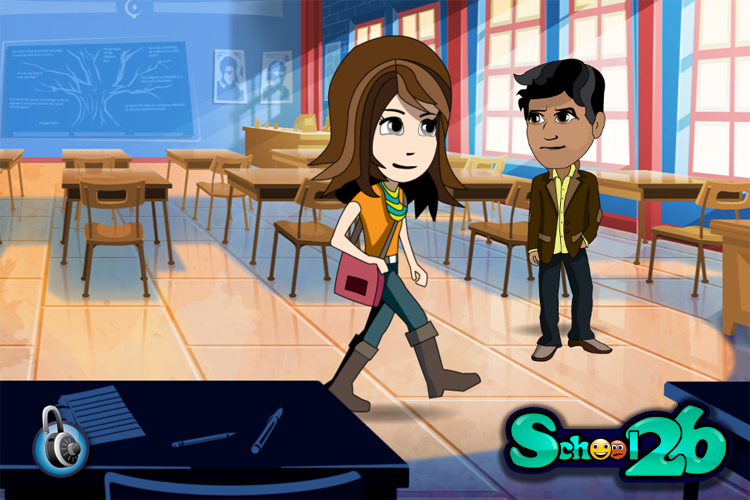 The main thing to remember with School 26 is that it is an incredibly niche title. It’s a release designed purely for younger teenage girls, and ones that aren’t interested in gaming at that. I’m female and I’ve always been a gamer – this to me is not a game. If School 26 had come up on my radar when I was 14 or so, I would have played it for a few minutes as an internet distraction and then gone back to Civilisation or Soul Calibur II. I’ve never been of the belief that girls need their own little sub genre of feminine styled games, particularly ones designed to help develop ‘soft skills’.

I certainly admire certain aspects of School 26. The writing is very good and never crosses the line into patronising or preachy territory. All the characters have a sense of identity despite their appearances playing to high school stereotypes, and the dialogue can certainly crack a smile every now and again. Particularly noteworthy is the way in which School 26 handles ‘the big issues’ with sensitive but relevant treatments of drug abuse, homosexuality, alcohol and sex. It was a bit surprising to find all of these things cropping up in the game given that the target age group is 12-16, so parents of kids on the younger end of that scale should probably give this a miss. Everything is handled in the context of friendship (rather than do’s and don’ts), which makes me all the more certain that something like School 26 would be better categorised as an educational tool for everybody, not just as a ‘game for girls’. 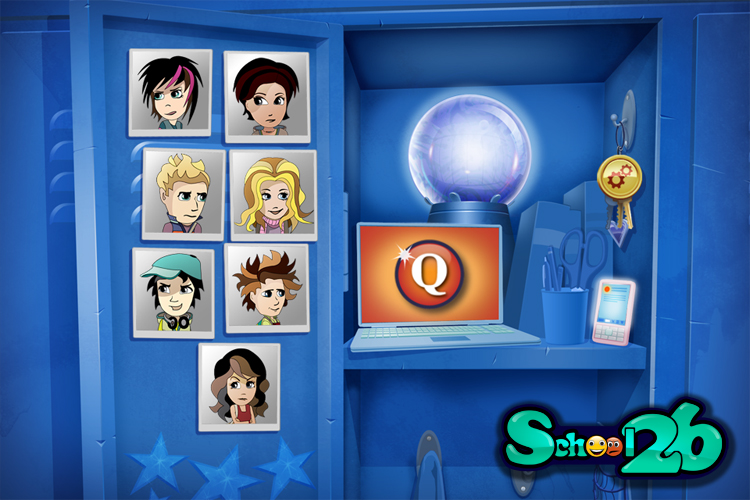 School 26’s title page theme bubbles along in an inoffensive pop rock kind of way, setting things up for the rest of the games presentation. Kate and co are big eyed bobble headed dollops of colour with clothes that scream out their associated clique: there’s the angsty punk girl, the quiet studious guy with the weird hair, and the dolled up queen bee to mention a few. Customisation is sadly lacking for Kate, so other than changing her name you’re stuck with a skinny Caucasian brunette with clique neutral clothing.  The sound is quite disappointing in that there isn’t very much of it, so don’t expect any voice acting from characters, any effects beyond button pushes or more than some generic background noise.

Environments are simple static scenes that you can’t interact with or move between – all the action is peculiarly pinned to Kate’s locker, which seems to function as a hub for warping between disconnected corridors, classrooms and bathrooms.  All the characters have the same range of facial expressions as Kate, although everyone does seem to be stuck in a perpetual mild breeze!

Everything has a decent level of detail to it and the colour schemes are all pleasant and bright – School 26’s presentation style does the job, albeit in a very simplistic way.

School 26 isn’t something to be judged as a game. It’s a title with a very specific aim, and if you’re outwith the target age group then there is no reason to touch this with a bargepole. However, if you’re looking for something to introduce a young girl to certain issues it certainly does a very good job in a context that is easy to relate to. The relationship building side of the game isn’t particularly complex or rewarding, but as a package it makes for a distracting enough couple of hours. On that note, it is only a few hours long at maximum, and I would highly recommend staying away from the PC version at it’s current $19.95 price point – the iOS version retails for a far more reasonable $2.99-$4.99, and would function best on the larger screen of the iPad.