Did you know that Octopus’ crave cookies? They do in Save Yammi. In this new iPhone/iPad title from Bulkypix, it is the player’s job to use a rope and other resources provided to guide a falling cookie into the destination that is Yammi’s mouth. It may sound simple, but storm clouds, barriers, and other obstacles stand in the way from completing this task, so a bit of strategy is needed to actually succeed. Now when I first seen Save Yammi, I let out a bit of a sigh as it honestly looked like your typical iOS game with a cutesy creature, but buried underneath the bubbly visuals is actually a very challenging and addictive experience. What makes this octopus so enticing to feed? Here is my review for Save Yammi. 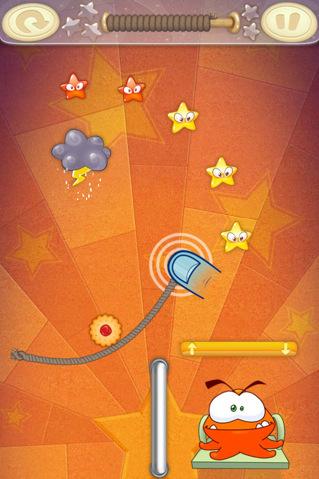 Gameplay
Save Yammi at first glance resembles Cut the Rope, as there is a rope and a hungry creature. Those who are expecting a clone however will be surprised to know that this title actually offers a bit more variety and a different style of gameplay than the famous game on the same platform. Starting up the game, players are shown a cookie in a bubble with Yammi, impatiently waiting down below to be fed. It is then the player’s job to pop the bubble, causing it to fall in Yammi’s mouth. While this is the main objective, other mechanics are used throughout to somewhat deepen the actual gameplay.

Each level features three yellow stars and two orange stars that are scattered about. Before Yammi can actually be fed, you must collect the yellow stars with the cookie (consider it a type of seasoning) or else Yammi completely ignores it, which of course results in a game over. Orange stars are not completely necessary to collect, but result in a higher bonus rewarded if collected.

Now due to the random placement of these stars, players are given a spool of rope which they can instantly access by tracing their finger along the screen, where the rope instantly unravels to catch the falling cookie. This allows for players to build a pathway of sorts to give the cookie a sense of direction or just a safe platform to land on. While using this technique, you must always be thrifty on your rope usage, as players are only allotted a small amount to work with per stage. It can take a bit of time to get used to, but due to the responsive touchscreen controls, most should catch on to this method rather quickly. 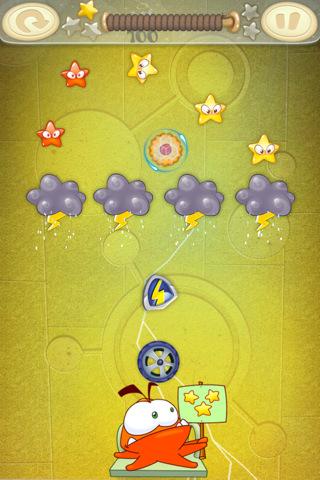 If the touchscreen wasn’t enough, players also must resort to using the iPad’s (or iPhone’s) gyro controls. This allows you to roll the cookie left and right along each rope or platform by tilting the device. Since you can’t move the cookie up or down with this method, player’s must craft their ropes to fit with the motion-based control mechanic. For example, if a star is a bit out of reach, the player can craft a curved rope, drop the cookie, and then quickly tilt the device to make it roll up the rope and capture the star. This gyro usage occurs in every level and is mandatory to actually finish each properly. Thankfully, both the touchscreen and motion controls compliment eachother for the who experience, allowing players to emerge themselves in the gameplay rather than fighting a frustrating control scheme.

As you progress throughout the game, more and more obstacles begin to appear which thicken the strategy needed to complete each level. These include the likes of a pair of scissors that split the cookie into two and menacing storm clouds that shatter the snack at just a touch. These environmental dangers are well placed though, so while it can be a challenge to guide the cookie around each obstacle, the game gives the player plenty of tools to assist in feeding Yammi. Abilities such as a bubble to temporarily fly in and a electricity-resistant shield are also found within various levels, each bringing a bit of fresh life into the gameplay. 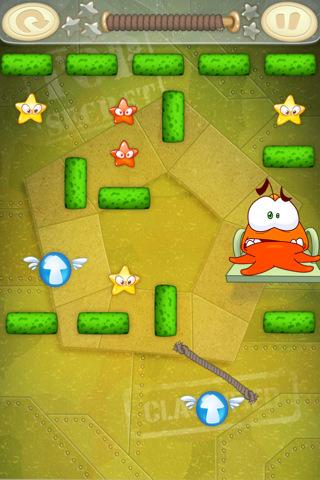 As you can tell, there is a lot of different elements working at once in Save Yammi, but due to how well they compliment eachother in the end, the final product is as sweet and addictive as the baked goods this octopus craves. With 100 levels and the incentive to go back through and repeat each to collect every orange star, Bulkypix have done well in creating yet another form of digital crack.

Graphics/Audio
The visuals in the game are rather simplistic, but do their job fine considering the genre that Save Yammi is in. Yammi is well animated and is constantly showing different emotions while you are guiding his food down to him, and there are plenty of different backdrops that make each set of stages feel somewhat different from the next. I also was quite fond of the bright color scheme the game featured, as the entire game is upbeat and cheery throughout the whole experience. 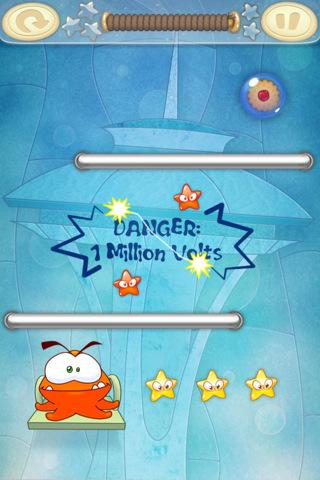 The music in Save Yammi is also well done, as it blends into the colorful background, capturing each setting perfectly. Yammi does occasionally make a few sounds as well, but hearing this stubborn octopus belt out “UH-UH” when you are short on stars can make you want to boil the creature in hot water rather than feed it (yes, I know…rather harsh).

Overall
While it may appear to be the run-of-the-mill casual title, Save Yammi actually offers up an innovative control scheme and an addictive gameplay formula that should keep most users creating ropes and feeding octopuses for hours. The visuals are all crisp and add to the experience and Yammi is certainly a charming mascot that is hard not to love. There is indeed more that meets the eye with Save Yammi, and considering the large amount of content included as well as the low price-tag, this little game is big on just about everything else.

I Give Save Yammi for the iPad: