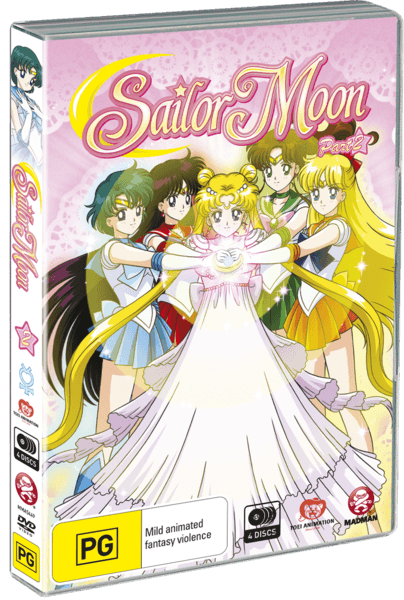 Following the death of Nephrite, a new enemy arrives from the Dark Kingdom. Queen Beryl has given Zoisite the task of collecting the seven Rainbow Crystals in order to obtain the Legendary Silver Crystal. Unbeknownst to Usagi, Tuxedo Mask is also collecting the Rainbow Crystals. Two new Sailor Guardians appear, and Usagi and Mamoru learn about their past lives.

Character development is a fundamental part of Sailor Moon. Without it, Usagi might have been nothing more than an annoying character, Ami might have been nothing more than the archetypal quiet genius and Rei might have merely been the original tsundere. Thanks to the unusual length of this adaptation, there is plenty of time to explore a whole range of personality traits and the issues of growing up with its characters. Usagi’s friend Gurio Umino is the star of one episode, and Naru Osaka also gets her own moments in the spotlight, even if it is because of the terrible loss she suffered during the conclusion of the Nephrite arc. The final 22 episodes of this season continue to provide the Sailor Guardians with significant character development too. The origins of the Moon Kingdom and the Sailor Guardians are revealed, as is the reason why Usagi and Mamoru’s lives are so intertwined. The two share a moving backstory, one that helps make their relationship feel right, even if it is completely unrealistic. 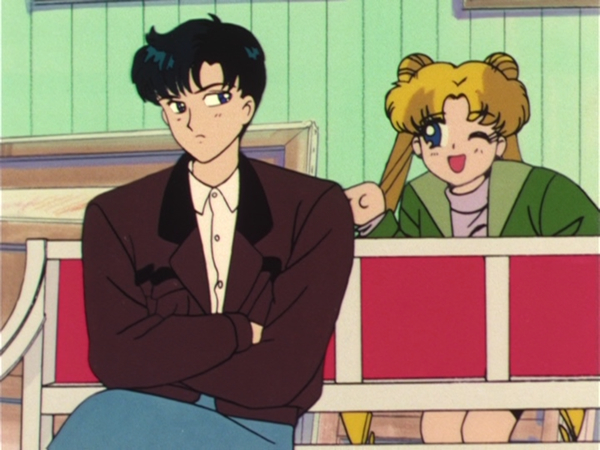 Ami is given the opportunity to grow during the Zoisite arc. The previous set featured the introduction of Ryo, the boy with a romantic interest in Ami. He returns in what becomes an increasingly difficult series of events for Ami. She continues to believe that her studies are more important than love at her age, but she is not oblivious to his feelings for her. Rei goes through less character development than Ami does, but she seems to get along with Usagi better than before after sharing some challenging experiences with her. They still fight, but they are capable of reaching an understanding with each other. New character Makoto Kino, who is revealed to be Sailor Jupiter, gets a powerful introduction. There are few tall female characters in manga and anime; tallness is frequently limited to bishounen (‘handsome boys’). Being the odd one out in terms of height, she has to deal with a lot of bullying from teenage boys who think she is some kind of ‘freak’. Bullying seems to only be explored rarely in Japanese fiction, so the discussion of it here is welcome. Makoto does fight back against the bullies, being willing to display her masculine side to protect herself and her friends, but this does unfortunately cause her to occasionally get into a bit of trouble. New character Minako Aino, who turns out to be the one and only Sailor V that Usagi idolises, gets into different kinds of trouble. She is far less mature than Makoto, but is a much deeper character than she first appears. Little time is spent seriously discussing Makoto’s past in this season, but Minako has a full episode in which her past is revealed. Sailor Moon gets emotional much more often than most magical girl series do, and that is always a good thing. The characters feel as real as they possibly can given their situations. Their interactions and development are not farfetched either, albeit with some exceptions. 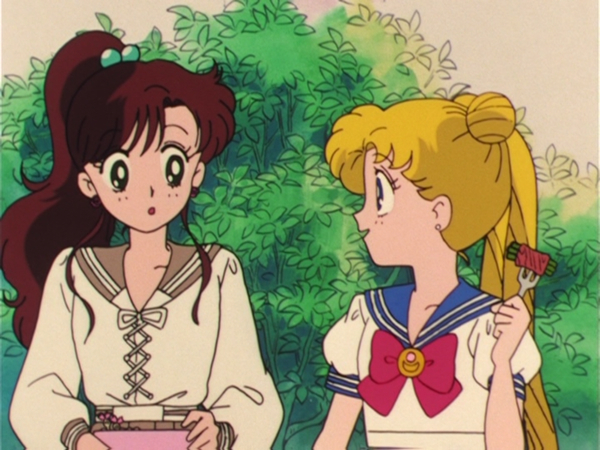 The tone of the series can be fairly dark at times, and these episodes continue that trend. Not every episode is used to progress the plot, however. One episode features a parody of Tuxedo Mask involving cats, and another involves a different parody of Tuxedo Mask that is significantly less bizarre. These self-referential parodies show that the production team did have a sense of humour and that there are many possibilities with the characters and plot they worked with. The final episodes may be disturbing for some, but this goes to show that this is more than just a show that children grew up with. It can be taken seriously by adults, and can be entertaining too regardless of the heavy nostalgia that surrounds the series for many people.

The look that this adaptation has is unfortunately a thing of the past. The traditional animation style used helps to give the series its charm. Even if it was produced with a 4:3 aspect ratio, it has an almost timeless feel to it. The colours and lighting are used just as effectively as they were before, and a lot of effort went into representing each moment as powerfully as possible. The monsters that appear in most episodes are highly reminiscent of designs from the 1990s, and are some of the only elements that date this series specifically in that time period. Many monsters look like stereotypical punks, with unusual hairstyles and hair colours distinguishing them from everything else. There are some graphic events towards the end of the season, but this will not be a problem except for children. Fan-service is once again non-existent, proving that anime series can be incredibly successful without resorting to cheap tactics.

Madman Entertainment’s release is once again fantastic, but the masters do not seem to be in perfect condition. Their remaster may not be as crystal clear as Viz Media’s Blu-ray release is, but this release will likely make an excellent addition to your shelves. 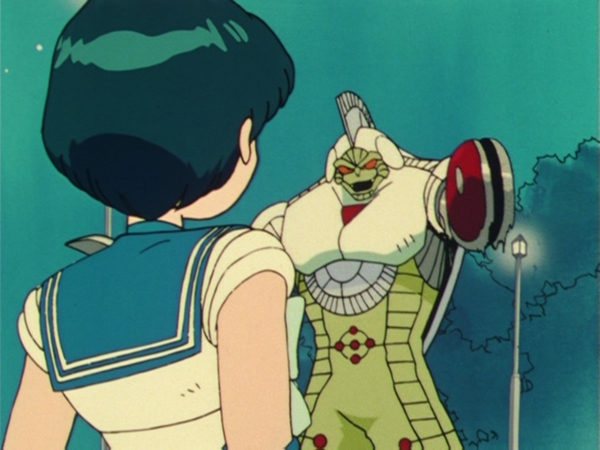 The new ending theme song, “Moon Princess,” is a lot more mellow than the previous ending song. It has a distinct ’90s feel to it. “Heart Moving” is more fitting for the series, but “Moon Princess” is not necessarily bad. The background music continues to standout as some of the best music ever composed for an anime series. Takanori Arisawa’s music perfectly captures the tone of every scene it is used in, and it never becomes annoying hearing the same songs in most episodes. The Japanese voice cast continues to do a fantastic job; Kotono Mitsuishi in particular conveys Usagi’s sense of anxiety, sadness and cheerfulness far better than voice actors do nowadays. All of the other voice actors stand out as well, but the same cannot be said for the English dub cast. The members of the new dub cast all sound distinctly North American, something that might seem obvious given that the dub was produced in the U.S.A., and it does not give the right feel to Sailor Moon. Fan opinion continues to be divided about the dub, so whether you watch the series with the original audio track or the new English audio track will depend heavily on whether you prefer to watch anime dubbed or with English subtitles.

On-disc extras included with this set are limited to the textless animation for the opening song “Moonlight Densetsu” and for the ending song “Heart Moving”. As with Viz Media’s release, “Moon Princess” is featured as an extra but only with the credits from one episode present; it is not textless. A representative of Viz Media stated that they could not include the textless version of that song in their release because it was not made available to them, so it seems that Toei Animation may not want it appearing on any English release of Sailor Moon for some unknown reason. The cover art of this release is fantastic, but the disc stacking inside the case is problematic. It is not always a major problem, but it is also not the safest method of fitting four discs into a DVD case. 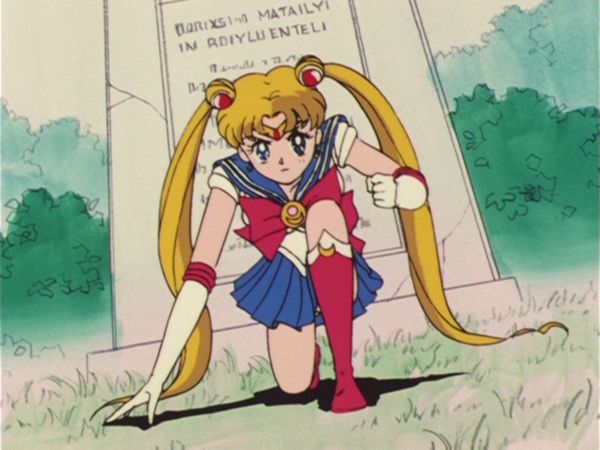 The conclusion of the Nephrite arc was incredibly moving and represented the emotional highpoint of the first two story mini-arcs. The finale of the entire Dark Kingdom arc is also incredibly moving; few manga and anime series would go as far as Naoko Takeuchi did and handle it well. Some viewers may find certain scenes to be disturbing, but said scenes significantly highlight Usagi’s internal struggles. Makoto and Minako make excellent additions to the team, and these 22 episodes provide a fitting conclusion to the first story in the long-running Sailor Moon series. The next season may be shorter than this one, but it is sure to be worth the wait. 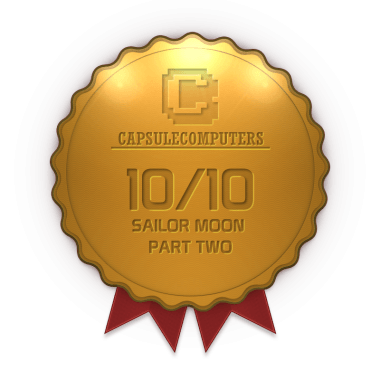