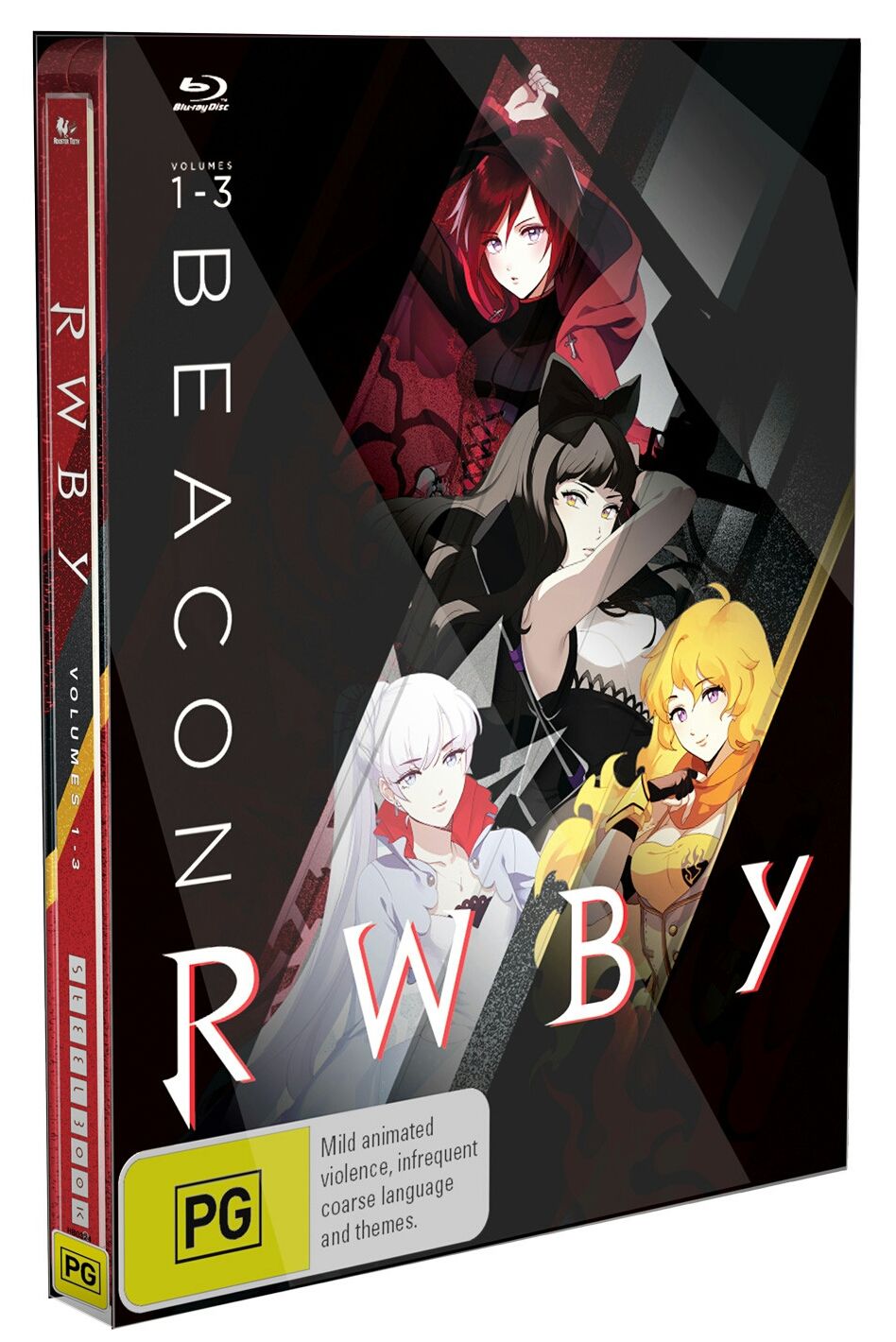 In the world of Remnant, people known as Hunters and Huntresses protect the world from the creatures of Grimm. These creatures are attracted to fear and negativity, so they are not a threat as long as peace exists. Ruby Rose is a fifteen-year-old girl studying to become a Huntress, and perhaps due to being in the right place at the right time, gets accepted into Beacon Academy. Beacon is a school that trains young people to become the protectors of the peace. She soon meets her teammates: her older sister Yang Xiao Long, the quiet Blake Belladonna and the heiress Weiss Schnee. Despite her positive and friendly attitude, Blake and Weiss do not immediately come to like Ruby. However, when they all end up being a part of Team RWBY, they must work together as a team in order to succeed at school and to save the kingdom of Vale from the Grimm and the revolutionist group White Fang. 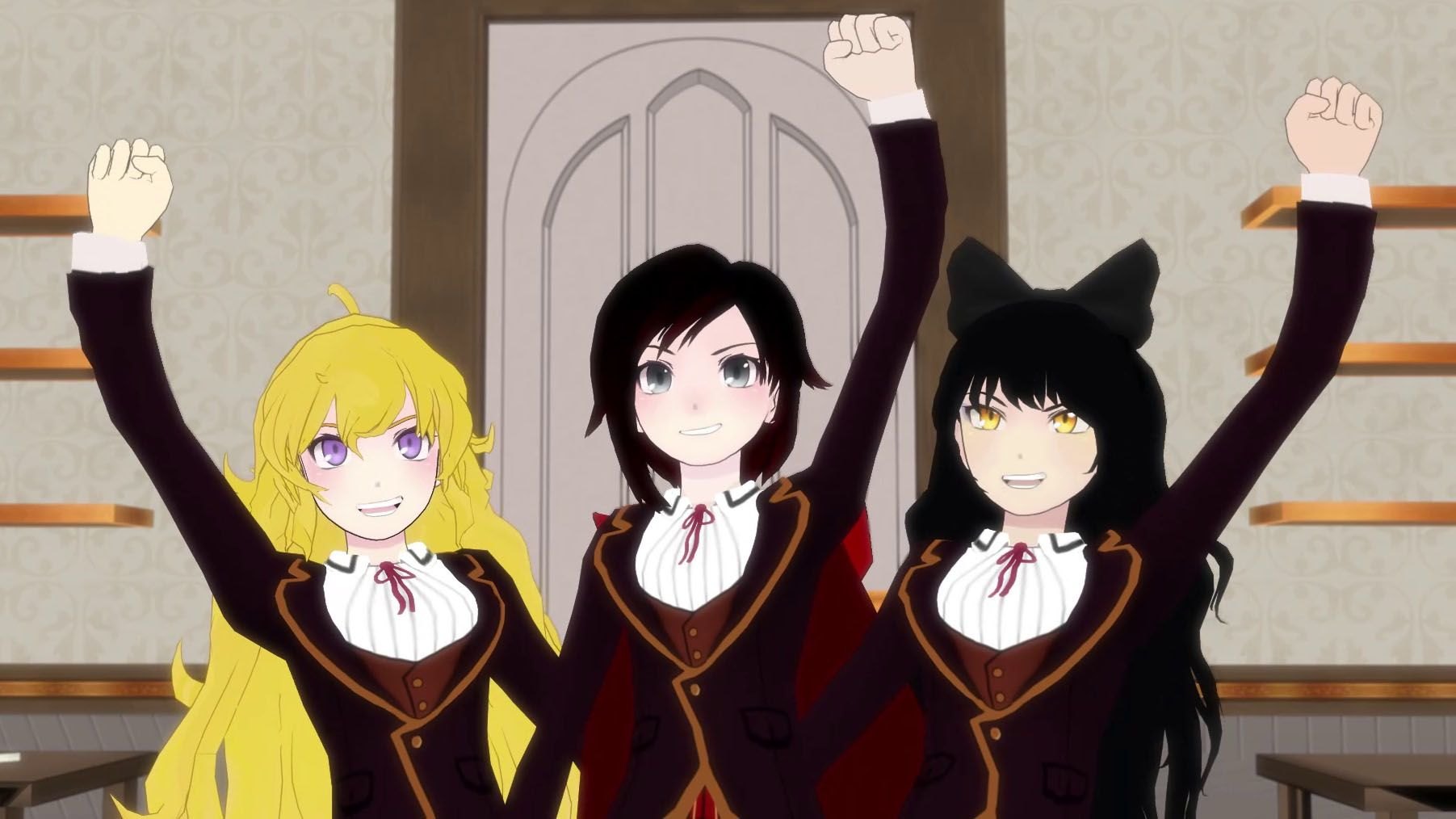 RWBY is dramatically different from the type of content Rooster Teeth was previously known for. First of all, it is the first Rooster Teeth production to feature girls as the main characters. The creator of the series, the late Monty Oum, came up with the idea to base four characters on the colours red, white, black and yellow. It is simple and exactly the sort of thing a typical modern Japanese manga author would do to create a cast of characters. However, while different hair colours would likely be the only character trait in an average modern manga series, ‘trait’ only being in the hereditary sense, Oum’s characters all feel real. They are significantly more realistic than the characters in Red vs Blue.

Ruby Rose, an almost perpetually happy teenager who wants to become a hero, is a sweet and caring friend who wants all to be right in the world. She soon finds out that fairy tales can be misleading in that they do not portray the world as it is, and she also finds out that being the leader of a team is a significant responsibility. Growing up is not always easy, a point that this series effectively drives home. Her older sister Yang Xiao Long is a fun-loving girl who just wants some adventure in her life, but she too comes across as realistic. There are, after all, people in the real world who live for the moment like Yang does. Likewise, Blake Belladonna is a familiar character; she is quiet and prefers to read books. She does not see the point in going to parties, but she also has a strong sense of responsibility. Weiss Schnee feels real too, despite heiresses to world-famous companies not being common in everyday life. She wants to believe that she is perfect, but she is able to admit to herself that she is not. That is not an easy thing to do, and despite having trepidations about Ruby leading her team at first, she is able to work together with others and become friends with her teammates. 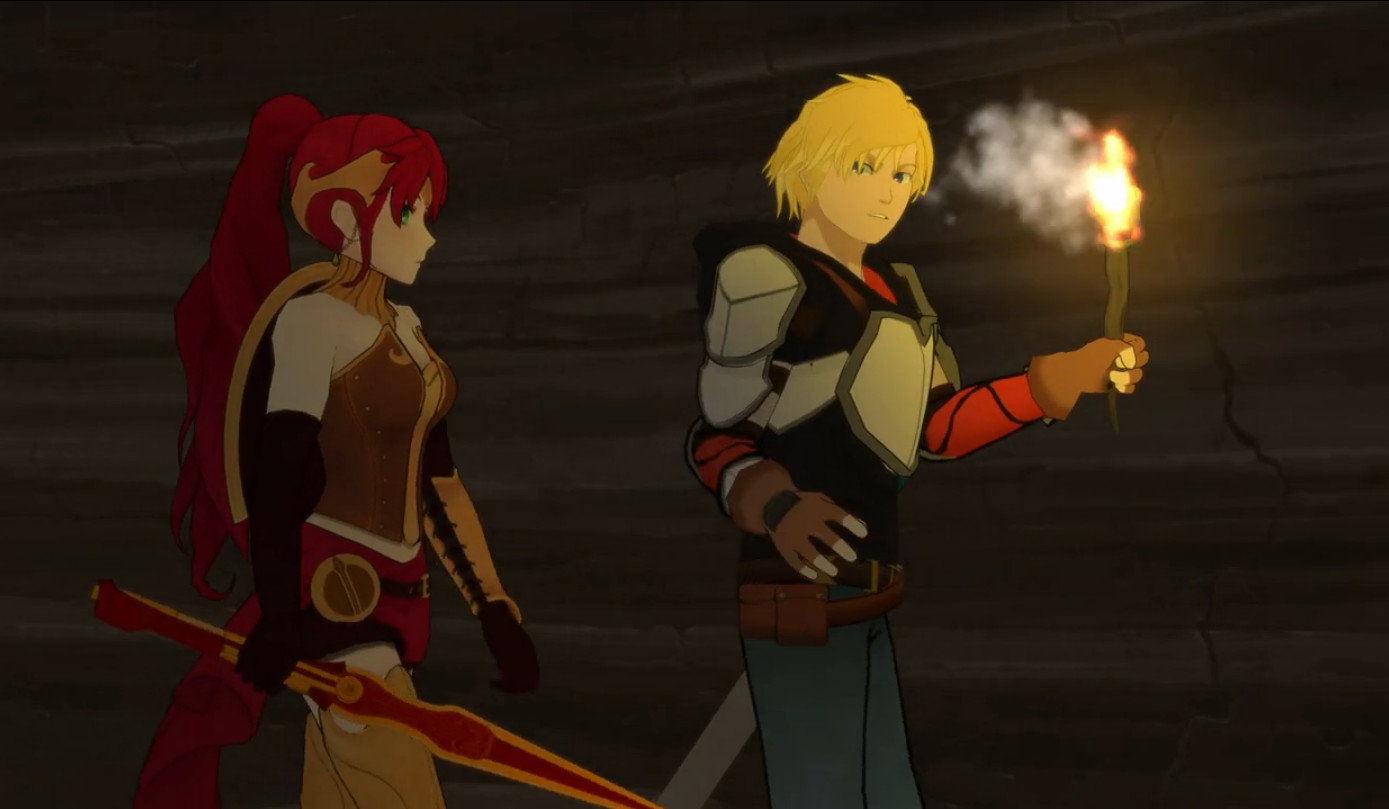 This series has a large cast of supporting characters and recurring antagonists, something that helps make it more engaging. Pyrrha Nikos has always gotten what she wanted, but is not sure exactly what she wants to do with her life. Others make her out to be perfect, but no-one truly understands her until Jaune Arc comes along and tries to become her friend. He wants to follow in his family’s footsteps but has no real fighting ability. Despite this, Pyrrha sees potential in him where no-one else has and helps him grow as a Hunter-in-training. The two of them have strong feelings and emotions, and by far are the easiest supporting characters to identify with. There are many more characters that make this show fantastic, although the members of Team CRDL are better when they are given as little screen time as possible.

Unlike the bullies, the antagonists are no pushover in this series and are extremely dangerous. Magical girl anime series would feature the protagonists saving the world, but things are not sugarcoated here. The bad guys are extremely bad, and it almost seems as if there is no way that they could possibly be defeated. Writers Miles Luna and Kerry Shawcross have stated on multiple occasions that these three volumes only cover the first act of the series, and this sounds right. Supporting characters come and go, but the antagonists have only just begun to wreak havoc on the world. The Beacon Collection covers much of Team RWBY’s first year at Beacon Academy and the Vytal Festival, but there is a long way to go, and a lot more of the characters and the world to learn about. 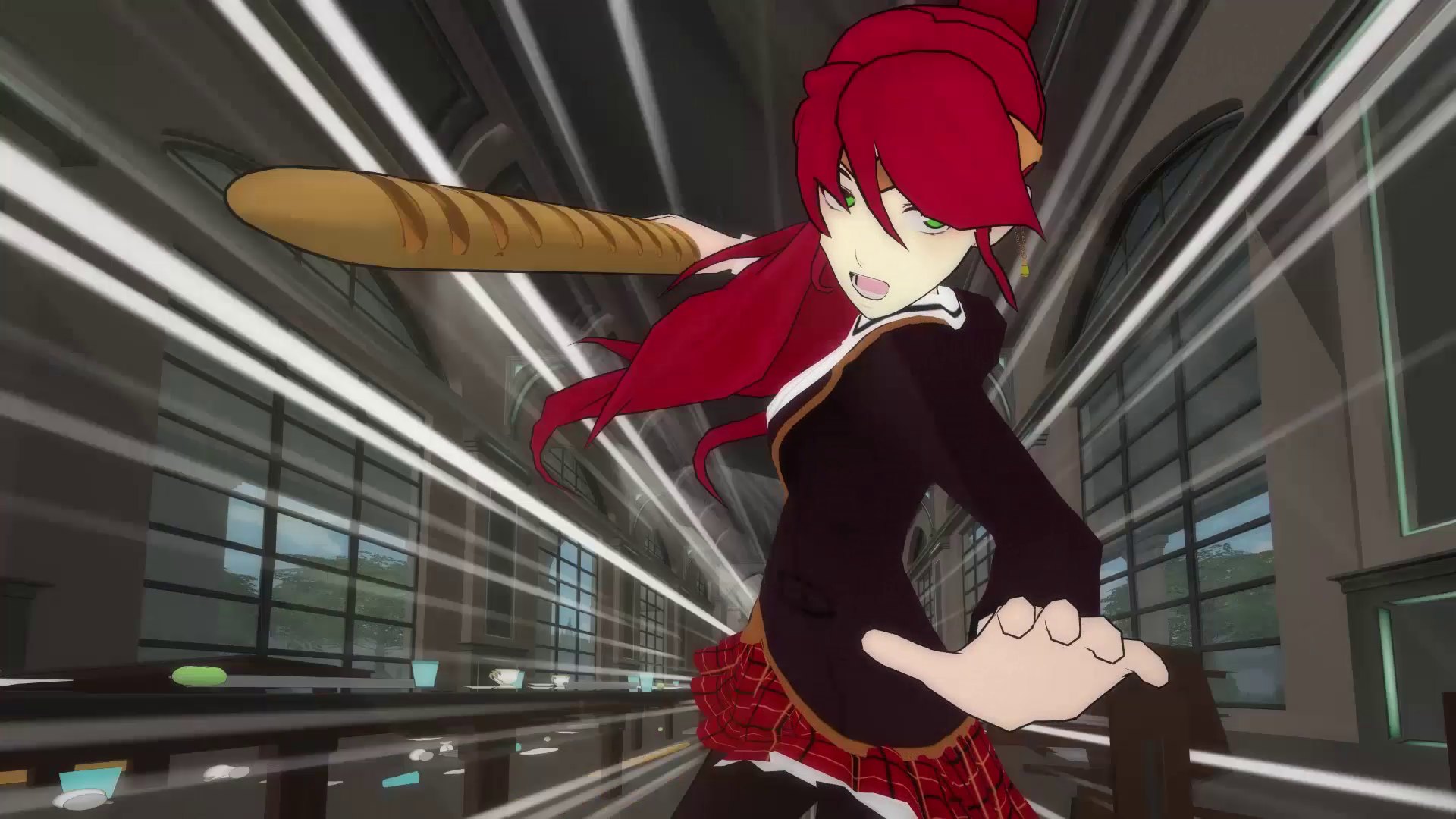 American companies have tried and failed to recreate the style of anime in the past. RWBY, however, succeeds in looking like a 3D anime series. The 3D style makes it seem a little more like a cel-shaded movie, perhaps somewhere between The Legend of Zelda: Wind Waker and the more common 2D anime style, but it works. The movements of the characters are fluid, the hair and clothes constantly move with the wind and the action sequences are incredible. There are no animation shortcuts used here; while there do appear to be some very infrequent drops in the frame rate and even rarer drops in quality, every aspect of the visuals is marvelous to look at. The backgrounds are great, the scenery is excellent and the character designs are unique and incredibly well-detailed. It is easy to see why so much fan art exists for this series.

Jeff Williams composes the majority of the music for this series, and his music gives it a wonderfully orchestral feel. It is right up there with the best of the music composed for modern television anime, and Williams continually demonstrates that he is capable of composing music in a variety of different styles to suit a variety of different scenes. A case in point is the music created for the Team FNKI battle in the Vytal Festival; it contrasts with the rest of the music but still sounds awesome and funky. There is so much to like about the music, and it is all available for purchase on CD from Rooster Teeth. 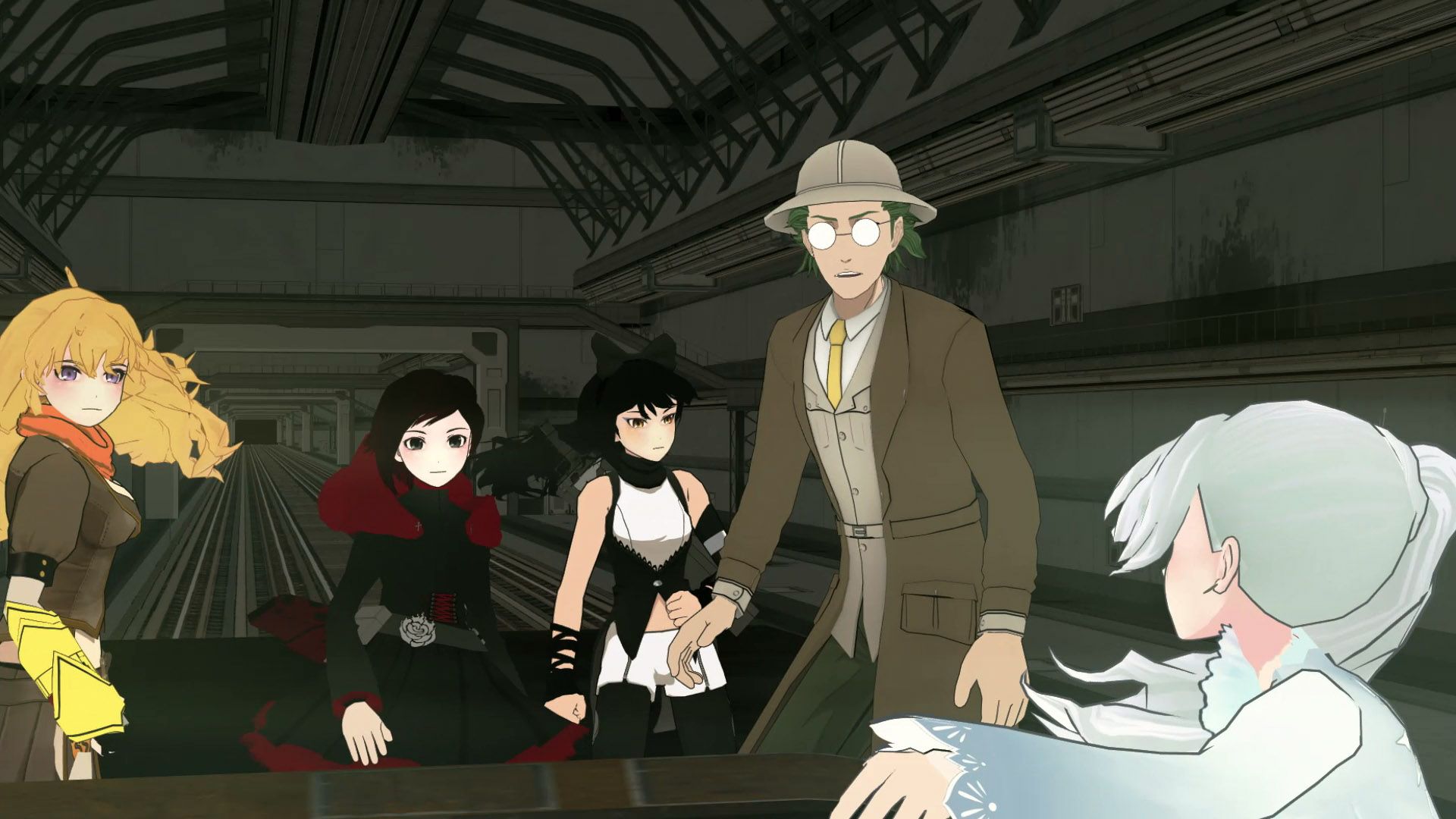 The voice acting is top notch. Before seeing the credits to the first volume, it was not obvious that Ruby is voiced by Achievement Hunter’s Lindsay Jones. Although her trick to portraying her almost seems easy when she demonstrates it in one of the extras, Lindsay is so convincing as Ruby that it seemed as if Ruby was voiced by a professional who had been working as an anime voice actor for years. Barbara Dunkelman can be picked straight away as the voice of Yang, but although Yang’s voice is not particularly different from Barbara’s normal voice, she does an excellent job of voicing the fun-loving girl. Arryn Zech is also great as Blake, so it is a shame that Blake continues to be one of the quieter characters. Kara Eberle similarly does an excellent job of portraying Weiss as a strong but imperfect girl. The recurring roles are all excellent as well; long-time Rooster Teeth fans will likely enjoy hearing Michael Jones as Sun, Ryan Haywood as the bombastic Professor Port and Joel Heyman as the hyper-energetic Professor Oobleck. Gray Haddock is convincing as major antagonist Roman Torchwick, and the list could go on. Suffice it to say that every aspect of the audio, as with every other element of the series, is outstanding.

There are over three hours of video extras included in this release. There are numerous behind-the-scenes videos detailing the production process, footage from an RTX panel, short episodes explaining more about the world of Remnant, fan art and more. If you want to learn more about the production of the series, these extras provide an excellent reason to pick up this release. Another reason is the SteelBook packaging. The artwork on the shiny front cover is fantastic. The artwork of Beacon Academy on the inside is a nice touch as well. This is sturdy packaging, so if you have friends or family members insisting that you check out RWBY because of the recent online premiere of volume 4, picking up this release is the best way to go. 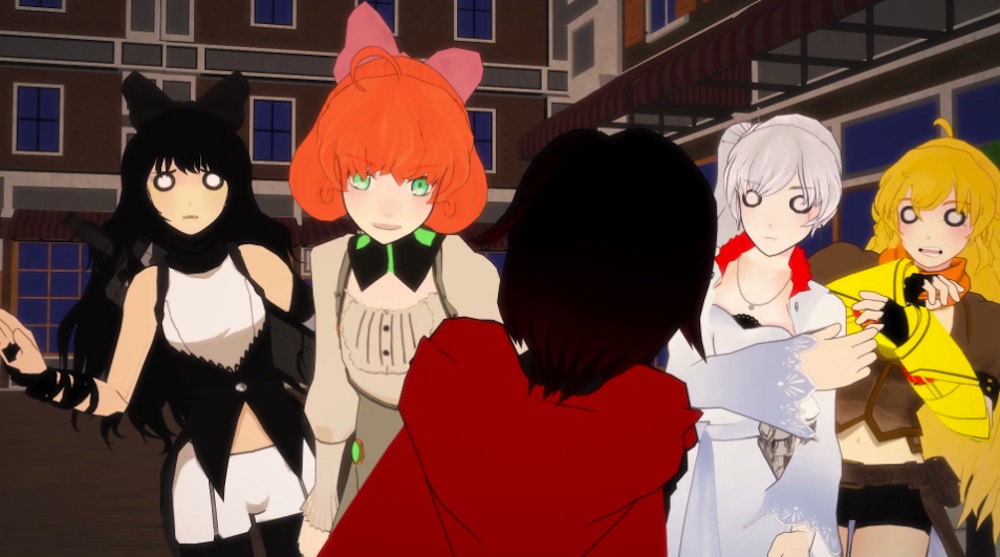 RWBY perfectly lives up to the hype surrounding it. One can easily see why so many fans immediately fell in love with it; the characters are realistic and easy to identify with. They go through struggles just like many teenagers do, even if the struggles are significantly more confronting and disturbing than is normal in the real world. RWBY has strong emotional engagement, making it easy to become attached to the main and supporting characters. With this outstanding series and more, Rooster Teeth is quickly becoming a leader in content creation in the western world. 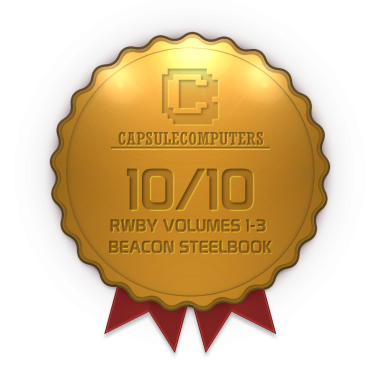 A fantastic fantasy series with an excellent cast of realistic characters and strong character development. This is Rooster Teeth content at its finest.
10