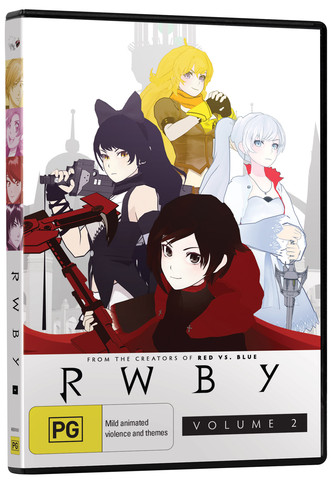 In 2014, RoosterTeeth Productions continued to grow as a media and entertainment giant, both on and offline. Their work with ‘Red Vs Blue’ and shows like ‘Achievement Hunter’ have made them very well known in the gaming community. In 2013, RoosterTeeth undertook a new venture to take a step into the anime community with a new show called RWBY. And it was a huge hit. RWBY volume 1 had everything audiences look for in a great show. It was quirky, it was original, it was spectacularly animated and it was teeming with unique lore and memorable characters.  The end of the last volume left every viewer begging for more.

In July 2014, fans got what they wanted. Episode 1 of RWBY Season 2 first aired on the RoosterTeeth webpage, and continued to air an episode once per week until the end of October. As with season 1, the entire collection of episodes has been released upon the season conclusion in DVD and Blu-Ray format. While the entire series is still available to watch online, for the hardcore fans, there nothing quite like owning a copy yourself. Does volume 2 deliver on what volume 1 started? Let’s find out! 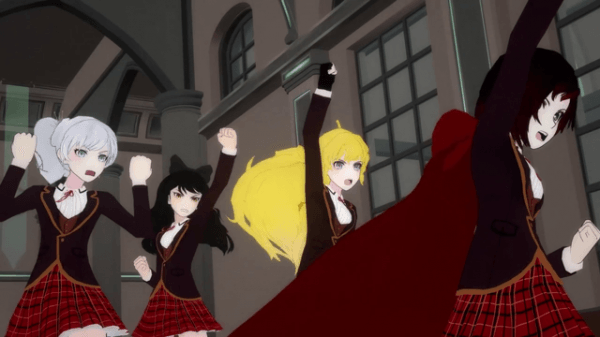 RWBY volume 2 continues the story of Ruby Rose, a young student at Beacon Academy, a school that specializes in teaching its students how to make mincemeat out of the various monsters of darkness that roam the land of Remnant. Ruby is joined at this prestigious academy by her fellow teammates Weiss Schnee, Blake Belladona and Yang Xiao Long. (And in case it wasn’t obvious, YES, the first letter of the girls’ names makes up the show title.) These girls are called Huntresses in Training, and are well known for being masters of armed martial combat.

With the events of season 1 behind them, and with their respective differences settled, the girls look forward to beginning a hopefully NORMAL second school semester. Viewers are treated to a taste of the mayhem to come in the first episode alone, when the semester gets off to a literally messy start thanks to an all out food war between teams RWBY and JNPR.

However, amongst all of the light hearted hi-jinks, viewers will feel that beneath it all, there’s definitely something amiss. The military of the Atlas nation have made their presence around the world increasingly known, while a mysterious trio of villains continues to ransack the city of Vale for some yet unknown purpose. And it’s not just the viewers who notice this trend. Each of the girls in team RWBY express their concern over the concluding events of last season, where several of the team faced off against criminal boss Roman Torchwick, and the Faunus liberation/terrorist group the White Fang. This most heavily weighs on the mind of Blake Belladona, as a Faunus (A half human-half animal) and former member of the White Fang, her motivation to stop Torchwick’s plans are more than personal. 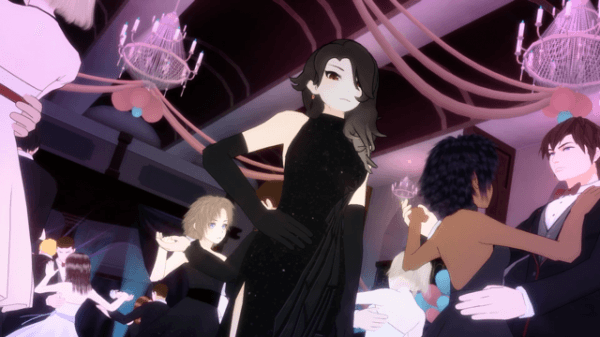 Along the way, the girls are joined in their efforts to uncover this plot by their friends in Team JNPR, (who, as with season 1, also get their own small story arc mid season), and some other new friends from out of town, including Sun Wukong, Neptune Vasilias, Penny and even Ruby’s pet Corgi Zwei. Volume 2 also introduced a myriad of new and interesting villains, including Emerald, Mercury, Neopolitan and Cinder, each with very interesting powers and abilities, the extent of which you just can’t help but feel they’re holding back on. And this just makes them seem all the more dangerous.

The story of volume 2 added just enough new characters to keep the relationships dynamic interesting without adding so many as to make them confusing or too huge in sheer number. As a high-school themed show, much in the vein of tales like Harry Potter, it wouldn’t be complete without SOME highschool-espue drama, complete with your typical array of relationship troubles. The show takes what are normally pretty clichéd drama themes, such as the secret crush and makes them genuinely interesting and entertaining to follow since the characters performing them are far more complex and developed than those we expect of these archetypes. Plus, this is the kind of show where you just can’t help but ship. 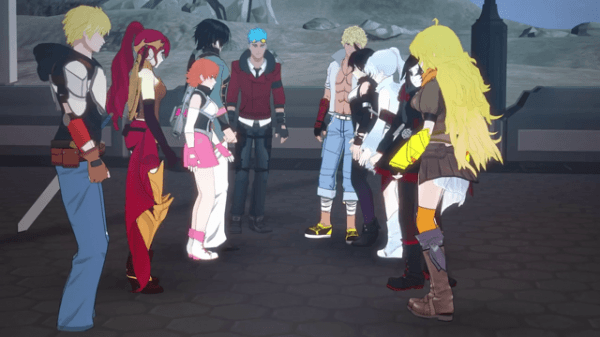 The only drawback of the story is the abrupt ending. Events such as the Vytal festival and the Combat Tournament are teased and eluded to, but never expressly shown. We can only assume that Season 3 will provide more on this front, but it was just a little disappointing to see that the tournament was held off this time around. Seems like it would have been the chance for some awesome action sequences, especially matches between friends. Regardless, the story delivered is still hugely engaging, and its many cleverly written upsides heavily outweigh this one downer. The delivery of its mix of action and humor is still top notch. There’s no other show out there that can quite compare to RWBY. 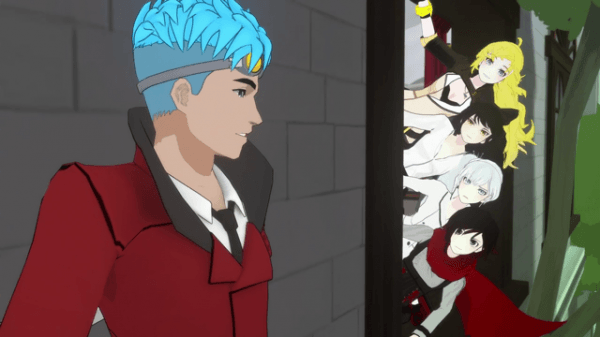 Something fans of the first volume of RWBY will notice is how vastly improved the environment and animation detailing is. The visuals of the first season, while distinct and unique in their own right, felt more like a test of the cell shaded, anime-esque art style. The second season has builds significantly upon this groundwork, and boy does it look pretty. The world now feels alive and populated, with background elements moving independently of the main character focus. The locations visited, such as the streets of Vale, the highway and Beacon Academy itself are very well animated and detailed in the standard RWBY CGI cell shading style. The cell shading still offers simplicity of color, but detailing of environments, objects and characters is clearly handled with a lot of precision.

Without a doubt, one of the biggest selling points of the show are the combat scenes, particularly in regards to the visual design of character weapons. Each character has their own distinct combat style, and a unique weapon, most of which have two, or even three modes, such as Ruby’s Sniper Rifle/Scythe, Nora’s War Hammer/Grenade Launcher, and Sun’s Bo Staff/Nun chucks/Pistols. Some of the biggest build ups are just made in seeing new weapon designs, like Neptune’s Assault Rifle/Spear and we even get to see a few of the teacher’s weapons which I won’t spoil for you. Sufficed to say there is no point in which you will watch and think that each weapon isn’t damned cool. The combat animation is even better and more fluid than the first volume, with the writing team coming up with some really creative ways to utilise and combine team members powers, like Ruby and Weiss’ ‘Ice Flowers’ attack. When you think you have seen everything, the show with pull the rug out yet again and show you more. 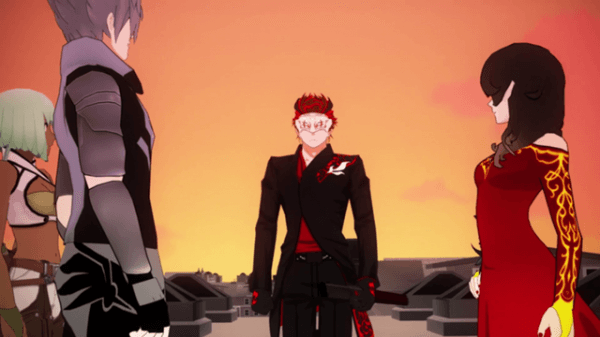 Any anime fan will easily be able to pick up the heavy anime influences present in the show. It’s pretty clear that series creator Monty Oum, despite his fame and aptitude for CGI modeling, is also a big fan of Japanese anime, and it really shines through in moments such as when the girls discover Ruby’s father had MAILED her pet dog to her in a tube. It’s always clear that the show is animated, and never strives for a huge level of graphic realism, and in many ways, that’s a good thing. 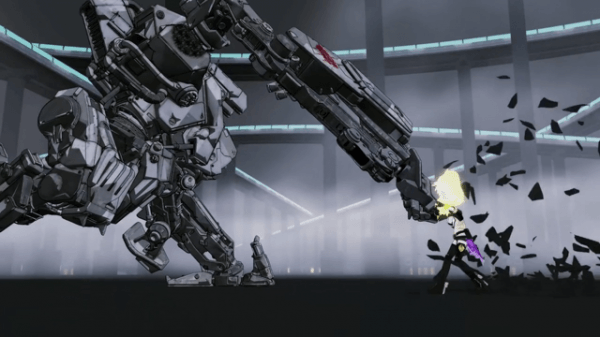 The music is expertly composed, featuring a masterful mix of orchestral and rock based scores. Although watching through the entire DVD as a film will skip it at each new chapter, it’s definitely worth watching through at least one episode in ‘By Chapter’ mode for the opening song alone. The theme of volume 2 ‘Time to Say Goodbye’ is just about as awesome as power ballads get, and also plays in the DVD main menu.

Much of the RoosterTeeth voice cast from the first season reprise their roles in volume 2, and they do it with a great deal of flair and personality. Let’s face it, if there’s one thing RoosterTeeth is known for best, its adding voices to things. At the same time, many of the voice actors present in RWBY are NOT the same as the VA’s in RedvsBlue (with a few exceptions). The predominantly female led voice cast do a spectacular job at putting some real personality into the characters. Balancing the mix of comedy and seriousness with the anime style flair is a difficult nail to hit on the head, but its pull off superbly well. The voice acting as a whole feels much improved and less static than the previous season. 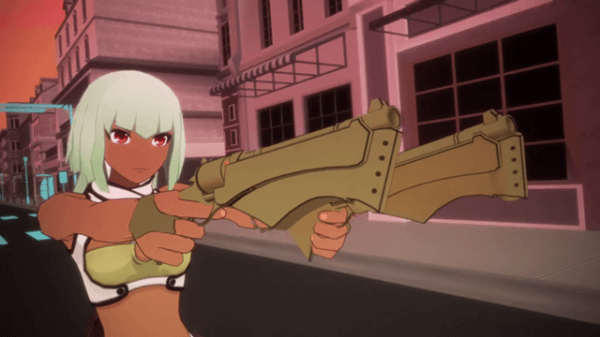 The volume 2 DVD features a very generous helping of extra features. As is standard RoosterTeeth fare, the DVD contains a selection of trailers from other RoosterTeeth shows, including RWBY’s own volume 2 trailer, Red vs. Blue Season 12 (reviewed here), The Best of RT Shorts and their new superhero style cartoon ‘Xray and Vav’. However, the real bulk of the special features are found in two other sections: The World of Remnant and The Production Diaries. The World of Remnant videos are short films that expand upon the lore of the RWBY universe, touching on topics such as Dust, Aura powers and the creatures of Grimm. For some of the newer viewers, this can provide some very helpful context, or at the very least, clear up fan speculation as to the nature of things in the world called Remnant. It’s definitely worth noting that the narrator voice of these little pieces of lore is provided by none other than Jennifer Taylor, better known as Cortana in the Halo franchise.

The Production Diaries are another interesting extra feature, where series creator Monty Oum takes the audience behind the scenes to show what happens in the creation process of a show like RWBY. This section goes into quite strong detail as to how characters and weapons are designed, to the subtle differences and techniques used in production to make the project feel more real to the viewer. It even details a fan competition to create a combat uniform design for one of the secondary characters. This is a very cool little extra for anyone who wants to know how making an animation like this is done. 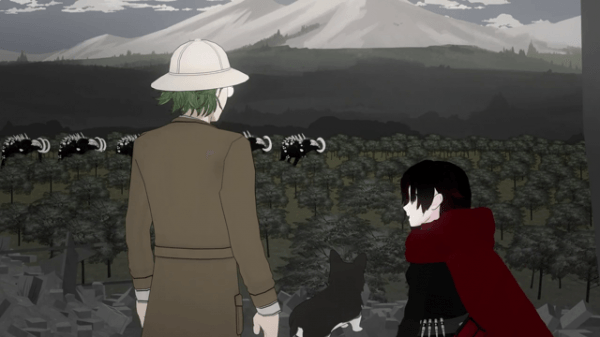 RWBY volume 2 took everything from season 1 and made it better in every conceivable way. The animation was better, the environments were more dynamic and populated, the characters were better developed, the story more engaging and the action faster and more intense. The only complaint one could even fathom is how abruptly it finished while still leaving so many unanswered questions hanging in the air. But you have to look towards the massive of it. A show like this couldn’t be contained to two seasons alone. And with two extraordinary teasers featured at the end of the collection, season 3 is already shaping up to be an even greater and more intense ride than this. RWBY Season 2 ticks all of the right boxes for all of the right reasons. A thrilling and hugely entertaining ride from start to finish, it’s truly an animation masterpiece. 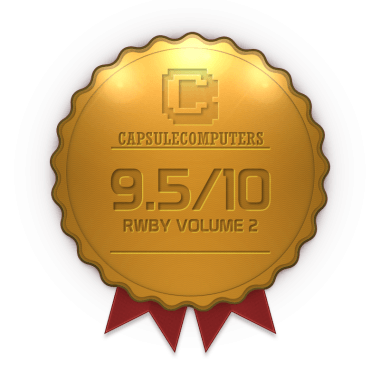