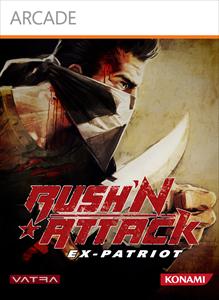 Rush ‘N Attack: Ex-Patriot is a 2D side scrolling stealth combat game, focusing on knife play, cold war plot lines and general “spy stuff.”  For most of the game, the only weapon the player fights with is a HUGE knife.  When unlocked, many various combos can also be used. For example, pressing down on the “L”  stick and then hitting “X” “Y” will allow the character to grab an enemies head, do a flip over said bad guy, and then stun him, allowing you to make that glorious finishing move, blood spurts included. Oh, and that is all done in slow motion too.  Yup, pretty cool. 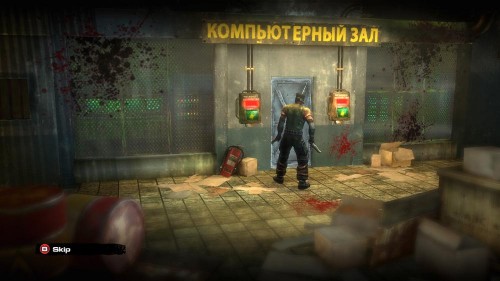 However, it is worth noting that there are not that many combos available to use.  Only about 15-20 could be unlocked, and they were fairly simple to pull off.  And the finishing move was always the same: a standard knife to the chest, also in slow mo.  Due to some not so smooth animations, the character felt super clumsy in regular combat as well.  When more than one enemy is attacking, it is nearly impossible to pull off a combo, and the limited strong & light standard attacks did little.

Nevertheless, Rush ‘N Attack is not a hack and slash type of game, although that is what it will feel like most of the time.  No, this game would actually like you to focus on stealth as your main asset.  Darkened closets and ceiling openings are available to sneak past cameras, surprise guards and wreak havoc.  Rushing in ‘n attacking is not really a viable option, as the main character will more than likely end up laying down ‘n dying when this type of gameplay style is used.

Initially, for about the first hour of the game, I struggled at trying to sneakily take down enemies without being seen and having to knife fight multiple dudes carrying machine guns.  It soon all began to click though.  Take a guy down, rush past the next few, hide in a closet, pull a hapless Russian inside and carve him up, and  then it was onto the next bunch.  Once I was able to pick up some artillery, with very limited ammo, it got even better, even if the weapons were VERY ho hum.  Lame assault rifles, standard rocket launchers and boring grenades more or less were the only option besides knives.  A glitch in the game  that caused the character to only pick up a fallen gun about 50% of the time was also a a source of minor irritation.

In many ways, I felt that the game was a precursor to a modern game that we  would play now.  In this console generation,  silky smooth animations, near limitless combinations of combos, large weapon variety, and easier character handling  have made a welcome splash.  If you wanna see where it all started though, just take a look at this game.  Its not that its bad, because it isn’t.  Its that it feels old, which can be good or bad depending on you viewpoint.  The only really frustration part was how clumsy the platforming and main character were. 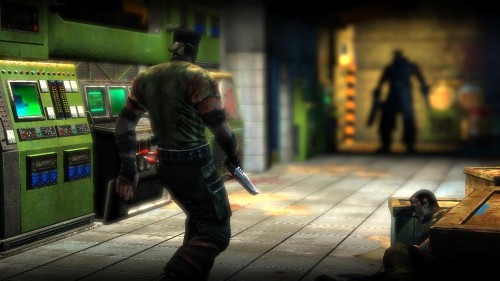 As far gameplay goes, Rush ‘N Attack: Ex Patriot is sorta solid. But the foundation on which it rests, the story, is atrocious. If it were a house, it would be condemned and killed with a wrecking ball, after which it would be burned to appease the story gods.  Galaxy ripping plot holes tear the story to pieces. The game starts out with the narrator telling of how he was sent to Russia to spy on what the communists were doing: in this case the Russians are excavating  a special rock that can make super soldiers out of ordinary soldiers. Part of the SpecOps team was captured, and he and a few others made it out alive.  20 years later though, his special crack team of agents (you) is assigned to rescue the left behind men.  Ok, so far so good, although 20 years seems like a preeeetttty long time.

All of sudden, it is revealed that YOU were captured too. So much for being a crack team, eh?  Next, a prisoner, with a large knife no less, breaks you out of your cell, saying that your team is on its way to be scientifically tested on by a mad scientist.  OOOOH, MAD SCIENTIST YOU SAY! CRAZY!

Now, your mission is to rescue the squad and find out if the narrator’s 60-something friend is still alive.

And that is about where I stopped caring.  Rocks that make super soldiers and mad scientists?  Yea, that hasn’t been done to pieces.  Also, why would a prisoner have a HUMONGO knife, that he then just gives to you?!  This same prisoner also reveals that he has the same training as you do.  Therefore, why in the name of all that is good and holy did he wait for you?!  He couldn’t break out, rescue the CIA ninjas and escape himself?!  Obviously, either the training method sucks, or the plot is awful. I’ll leave that up you to choose. 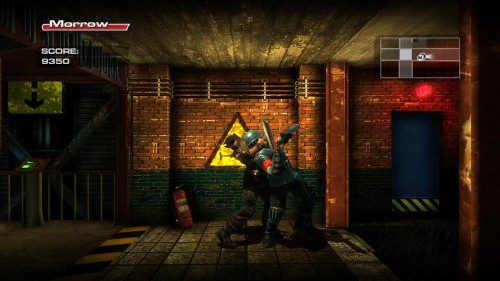 The other parts of the game, audio and graphics, also feel outdated.  Rough edges make for unappealing eye candy, and the background is not all that exciting either.  The soundtrack is there all right, but it doesn’t make the action more gung ho.  The sound effects are generally a redeeming feature to the rest of the audio though.  Whenever the main character slides into the shadow or does a combo, there is some cool “whoosh” effects and the rockets and other items also have good audio behind them.

My favorite line in the game came at the beginning, when the narrator, talking about your squad, said, “You are one group of badass ninjas.”  I though to myself, “This game will be awesome!”  Promptly thereafter, I was captured, and all hell broke loose.  It was then I realized that this game is good, but not badass.

In summary, Rush ‘N Attack: Ex Patriot is fun in one area: the game play.  Even then though, there are some terribly boggy sections that siphon the fun out.  The rest of the package falls flat on its face too.