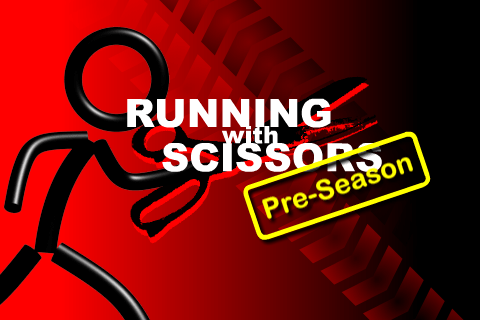 Overview:
This is quite a simple, yet very addicting and enjoyable game.  You are a stick figure, running with scissors and disobeying your very nature of being told never to run with scissors, or of course valuable things.

Running with Scissors is more than just what the title says.  You are running against three other players who are racing towards a finish line.  Not only that but you must also contend with dreaded kittens and to tornados tearing up the terrain.

The stick figure players, surprisingly have a bit of polish to them and don’t simply look like lines someone would draw in MS Paint.  You have the ability to choose your color, and then that color is stylized and shined onto your stick figure.

Each background is quite beautiful and changes to show any obstacles that might be occurring at that same time.  There are only two levels at the moment, but both look superb.  When running through a field you have the blue sky behind you and the crisp looking grass beneath your feet.  And the other level you are running on cloud tops with blue gray mountains in the background against the sky. 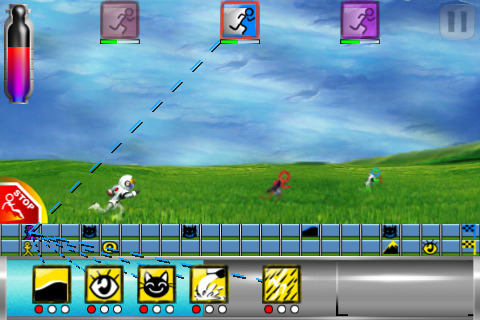 Each of the obstacles is also blended perfectly, when a hill is added or a mountain, it does not look out of place in the slightest, that includes even some of the stranger obstacles, such as eye stalks sticking out of the ground, or milk jugs that could be spilled.

Now when you first start playing the game, you might not think the game will be very enjoyable.  However after your first race you start to get drawn into playing again and again.  As each race brings forth new opportunities and is never the same as different things happen every time.

Not only that, but after each race is over, win or lose, you have the opportunity to play your own scratch off ticket.  Scratch N’ Win is where you can scratch off squares to get the opportunity to unlock items without the need to buy them, or you can get coins and hold them to purchase more items for you to customize your runner. 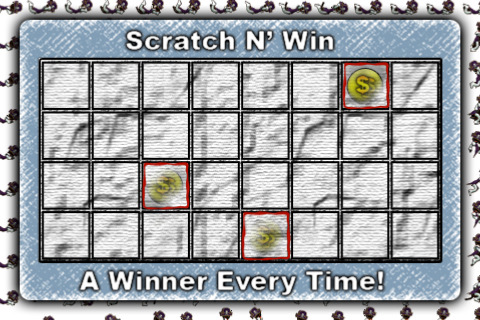 There are a total of three different outfits for your runner to currently wear, but more are being added everyday as the game was quite recently released and is receiving updates on an every other day basis. There are also three different items you can be carrying in your hands, from dangerous to priceless, running with them would not normally be advised.  Though who’s to stop you? 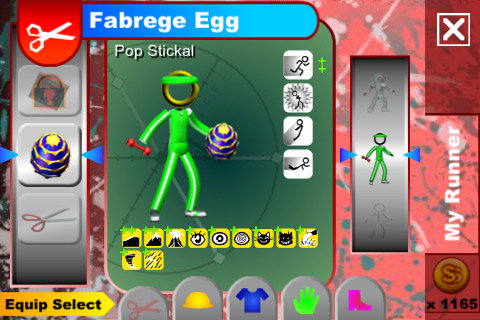 There is an energy bar feature that you charge by running, and this is where the fun really begins.  The basic use of this feature is to jump or fly over obstacles that you have laid down in front of you.  However, you can also use your energy to create obstacles for your other racers.  You may create a hill in their path to slow them down, kittens to hug them to the ground for a few seconds, or even a tsunami to transfer them all the way to the starting line.

One problem is that the game does tire your fingers out quite quickly, as the only way to run, is to use your fingers to quite literally, run as if they were your own legs.  Using two fingers you run them along the right side of the screen to move, and this has to be done quickly and nearly constantly, as not doing so will result in your runner standing in place. To jump or fly, you must also slide both fingers upwards, though in the midst of flight you do not need to keep running and can give your fingers a small rest until your energy bar runs out, bringing you back to earth.

This is quite an enjoyable game that will have you coming back to continue racing again and again.  And with updates on the way there will be more and more features to unlock and areas to race in.  At a price tag of only $2.99 that is quite affordable for an enjoyable time waster such as this.  Though your fingers may be tired from all the running they will be doing on the screen.

Running with Scissors gets a running 9 Capsules out of 10