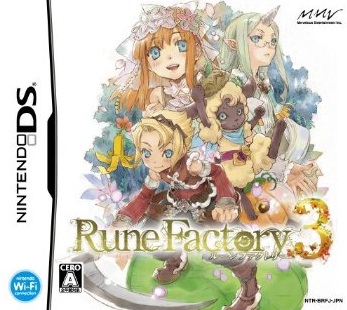 The Rune Factory series is a curious thing: it offers a spin on the Harvest Moon games by adding action and adventure to a sedate farming life. But surely these two aspects contradict each other and can’t both co-exist in the same game? It’s true to a certain extent. At times Rune Factory 3: A Fantasy Harvest Moon seems to suffer from an identity crisis, unsure of whether it’s one or the other and ends up being quite dull; at other times it feels great to be able to embark on your adventures whilst having a solid place to base yourself at and continually return to.

Your journey starts when you arrive in the town of Sharance with no memory of who you are, washed in by the rain where a girl called Shara takes you in and gives you a bed to rest. On the morning following your recovery, Shara proceeds in showing your new home, the Sharance Tree. It’s an almighty tree and is the place you stay in exchange for agreeing to tend to the farm located underground underneath it. As if crops growing despite being deprived on sunlight wasn’t strange enough, your living space is literally inside the tree – a fully furnished room carved into the trunk of it, complete with front door and mailbox. Funnily enough, people also complain that it no longer blossoms, adding an extra element of depth to your exploration as you try to get to the bottom of this mystery, but don’t seem to realise that digging out its insides could be the reason. In the end, you find out it isn’t blossoming for other reasons, with a more magical explanation. 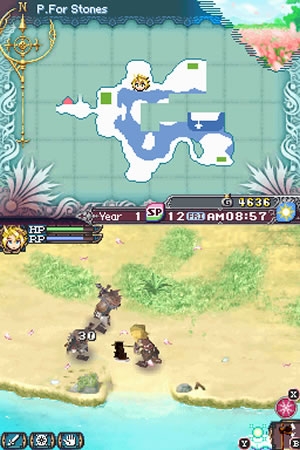 Your home acts as your base camp within a base camp, because many features of village life are scattered around the town, but the true necessities are located around your home. As well as the farm, which will be one of your main sources of income and resources, you have the mailbox which keeps track of any requests from other villagers, a journal which acts as one of the save points of the game, a fridge and trunk for storage of items, a calendar to keep up to date with what’s going on in and around the village, and a bed which you must rest in to fully restore your HP (Health Points) and RP (Rune Points).

Moving around the village, you realise that it’s actually quite an interactive environment, with residents milling around, going about their daily errands as they walk all over the place. While the town is a cute area, however, from a distance and before striking up conversation with them it can be hard to tell what each person is supposed to be as the visuals are so grainy, mainly due to limitations of the DS graphical power. Even with slight differences in movement which show the elderly townsfolk to hobble about hunched over like primates, it can be difficult to make out what age, gender or emotions the various people are meant to be. This does clear up when you talk to them, but only because of pop-up cut-outs of a clearer display of them show what they really look like as you read the text to find out what they are saying and how they are feeling. For example, you meet an odd pair which give off a typically Japanese sense of humour, Sofia and her father, who both speak in opposites, making for some amusing exchanges. For some strange reason, though, certain lines of text are spoken but not others, understandable for greetings like ‘Good Morning’ but rather odd when they are randomly dispersed throughout conversation in their generally naff high-pitched intonation. 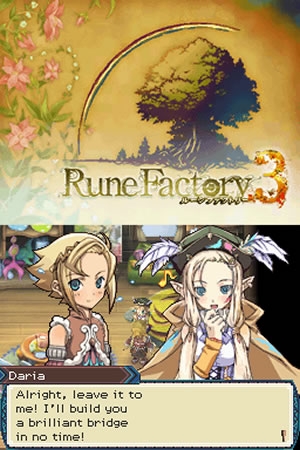 The action side of the game comes from the routes out of the town which take you to different themed dungeons of varying difficulty levels, with snow, desert and forest all occurring in unnaturally close proximity to one another. Each dungeon is given a difficulty rating out of five stars and a suggested minimum level you should be before entering. The combat system is very much an action-RPG, with live action battles as opposed to stationary turn-based menu affairs, with gameplay only pausing when you open up your items menu in order to give you time to equip the necessary weapon for battle or health replenishing foodstuff. What this system means though, is that you can run through harder dungeons pretty much unscathed if instead of confronting enemies you just leg it to the end, even if ultimately, this method doesn’t prevail as the boss battles at the end of a dungeon will prove too much for you and your insufficient stats. Instead, you have to grind it out and level up before you are able to tackle more substantial areas, a grievance to many RPG players as it feels like a needless waste of time, even if it is fairly common for most RPGs. Random encounters, another common feature in RPGs can also be found in Rune Factory 3, because although you aren’t transported to a separate battlefield every so-many steps, leaving a zone and returning brings back an brand new batch of monsters. 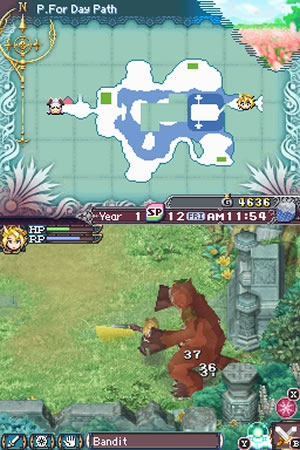 Losing all your HP and RP in battle sees you transported to Marjorie, a kind old witch who nurses you back to health. At first she does this free of charge, but once you’ve levelled up enough and learnt of your ability to transform into a ‘Wooly’, a sheep-like monster much like the ones you battle, she begins to charge for her services. On the plus side, the combat gets a lot more satisfying when you learn of you abilities that come from being a half-monster. You slowly regain some of your memories and can perform swifter, more agile combos.

With a mixture of farming, shopping and questing, Rune Factory 3: A Fantasy Harvest Moon almost plays like Animal Crossing with swords. The slower pace presented by the growing and harvesting of your crops and village life (such as completing the dull errands of the townspeople and occasional festivals) will feel like an unnecessary time sink latched onto the RPG for some, whereas to others it will feel similar to the gathering and hoarding of resources usually present in RPGs as a means to make money for weapons and supplies. Underneath the repetitive tasks there’s a decent enough RPG and plenty of hours of playtime, and for those who already have a proven love for the Rune Factory games, the new feature’s of the monster ability and a labyrinth mode of dungeons for up to 3 players provide sufficient new experiences to make it worth picking up.