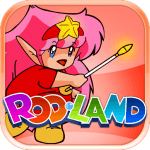 Rod-Land is a jaunty little exploration into 90s gaming on the iOS. You play as a fairy whose mother has been stolen by an evil person (sound familiar? Old-school games don’t really have a lot of plot variation). Kinda makes you wonder why a fairy’s mother has no special skills of her own to defend her from scary black crows that hijack you and take you to far away tower tops. It offers a great window into the past with a modern programming twist.

Rod-Land is your typical old-school platformer, you flutter around the screen with your magic wand that can stun, throw someone around, or make ladders. This may not sound as impressive as it should, but as whenever you have two abilities, making ladders is quite an important part of the game. 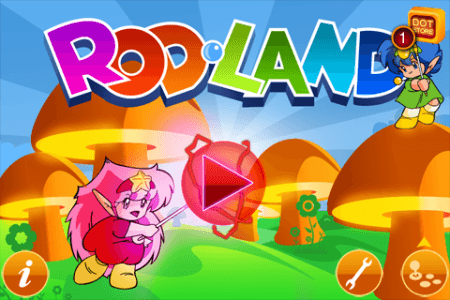 Rod-Land hasn’t evolved much in terms of controls. There’s a D-pad and A and B buttons, which you can customise and move around the screen. At first if you haven’t played it before it might take some getting used to, because you have to have a strong handle on how to use both buttons in order to successfully use the necessary tactics. The D-pad takes some effort to get a hold on how to use it really well, if you could attach an actual D-pad to the phone it would have been perfect, but the touch sensitive one is good enough once you’ve adjusted. 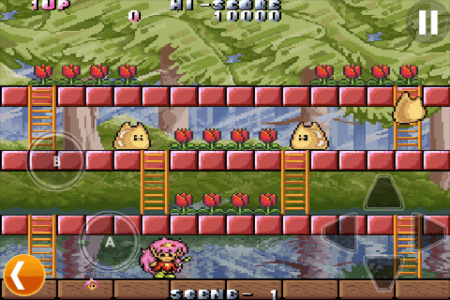 The A button controls your little fairy’s wand, which can either stun enemies at a certain close range, or grab them and bash them around three times until they turn into a weapon you can use against other enemies. While you chuck them around over your head for fun, you can also hit others with them. If you hit an enemy with one of the weapons you get an extra bonus, which is great and helps you gather points. You complete each level by killing all the enemies in that level, so all the flowers that give you extra points are only a bonus. Each level has a goal of reaching 10,000 points; if you get over that amount then you get three out of three stars for the level. Oddly this doesn’t change for boss levels, so you’re guaranteed to get three stars simply because by defeating the boss you automatically earn 10,000 bonus points. 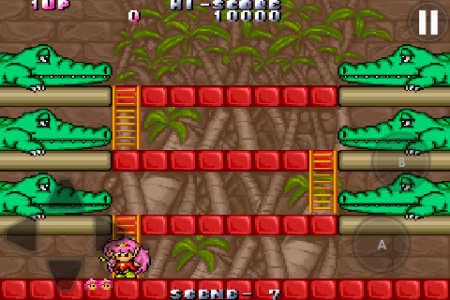 In story mode you are given one life for each level, and two for boss levels although I had gotten so used to doing things in one life that I almost preferred to manage it.

The game has sixty levels in total with three different game endings, which should take you a decent amount of time to get through. The levels are fairly similar, and all in the theme of the original game. But don’t mistake the simplicity for easiness, as the levels go on you have to utilise your tactics to try and make your way through the time-sensitive levels. 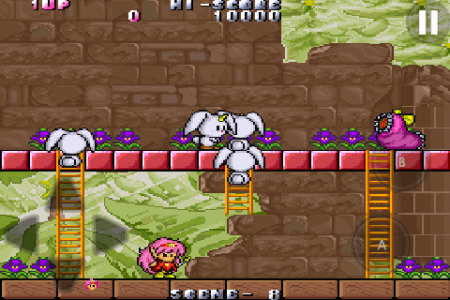 Each boss took me a couple of turns to get the tactics down, given that they’re all unique in their attacking range. As they go on they get more difficult obviously, but in a good way. I never found the game so frustrating I wanted to throw something at it, it was always fair and if I ever failed it was my fault, not a lack of user-friendly-ness. 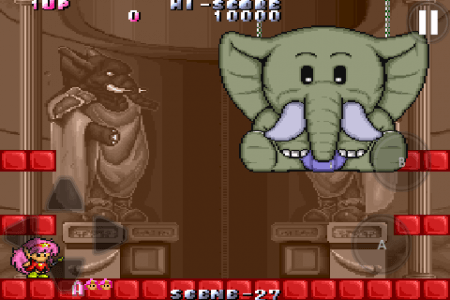 After finishing the two acts of story mode you unlock survival mode, which is the same thing except you have five lives and you’re scored on how far you can go in the game before dying.

At one point the game did have a little hissy fit at me and all the buttons turned into white and black squares on the screen replaced them. But by that stage I had played enough to know exactly where the D-pad controls were meant to be and how to use them.

The whole game screams 90s, it’s pixellated but in a stylised way. The actual potential quality of the graphics is clear in the menu screens, which are given the modern day quality. There’s a total throwback that makes you yearn for times gone past. The cut scenes are classic, a series of pictures with bad grammatical and spelling captions accompanying them. The soundtrack matches the visual, the developers really sought to get the full feel.

Rod-Land is a great nostalgic throwback with deceptively difficult levels. Its definitely worth a play through, especially if you enjoyed playing the previous versions although you might feel at a loss without the joystick control.