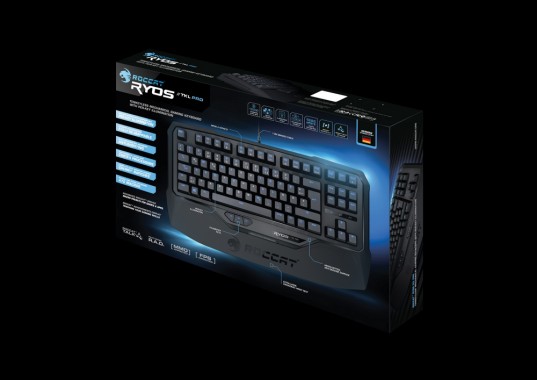 Visual learner? No problem. Check out our video review at the bottom of the page.

Unless you’re an accountant or some other number crunching nerd, most gamers see the number pad as the vestigial remnant when computers were built with business in mind. The Roccat Ryos TKL Pro keyboard uses a tenkeyless design that ditches the number pad in favour of desktop space savings. The keyboard is available in a mindboggling number of keyboard languages and in four of the most popular Cherry MX switches. 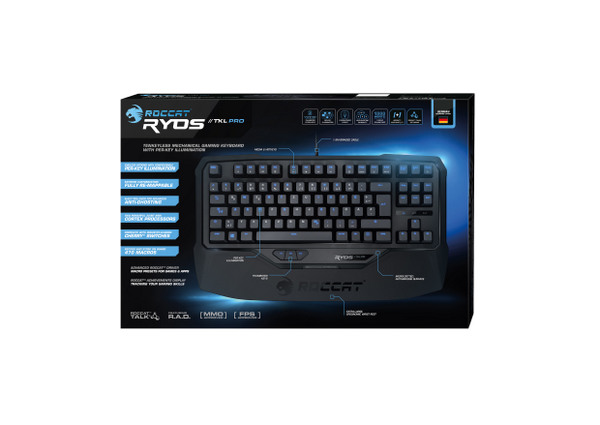 The keyboard is packed in two boxes. The first outer box sports all of the technical information and pretty pictures to lure buyers when sitting on the local computer store shelf. The inner box is a more subdued and classy affair that is reminiscent of Apple packaging design. The inner box opens up to reveal the keyboard packed securely with a small instruction guide.

The Roccat Ryos TKL Pro is the smaller brother of the Roccat Ryos MK Pro. The TKL Pro is designed to take up the smallest footprint on a desk as possible and to be easy to carry to LAN parties. Num lock and the entire number pad has been completely eliminated, and the macro keys on the left side of the keyboard have met a similar fate as the number pad. The LEDs that indicate Caps Lock and Scroll Lock are on have been shifted underneath the Page Up/Down key cluster. 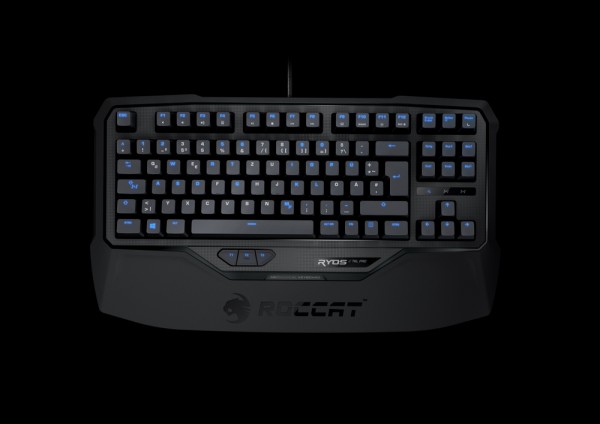 The keyboard features a shiny/matte design intended to stop fingerprints. The main body has a nifty dot design that gives the keyboard a unique look. The dots are shiny plastic, which reflects a little bit of light, but are small enough to hide any finger prints. There are feet on the bottom of the keyboard for those who prefer a steeper typing angle. The Roccat Ryos TKL Pro comes with an integrated wrist rest. Personally, I would have preferred a higher wrist rest, as I found my wrists to be at less than ideal angle when rested. The wrist rest is generously sized, which is a bit curious to me as the keyboard is designed to take the smallest footprint possible.

Like most mechanical keyboards, the Roccat Ryos TKL Pro is a pretty hefty beast. Between the generously sized rubber feet on the bottom of the keyboard and its weight, I found it impossible to move the keyboard around when typing. There are several channels built underneath the keyboard that serve as cable management. The channels seem to fit the standard USB cable gauge. The channels are a straight U shape, so slightly thinner cables will fall out if the keyboard is lifted. 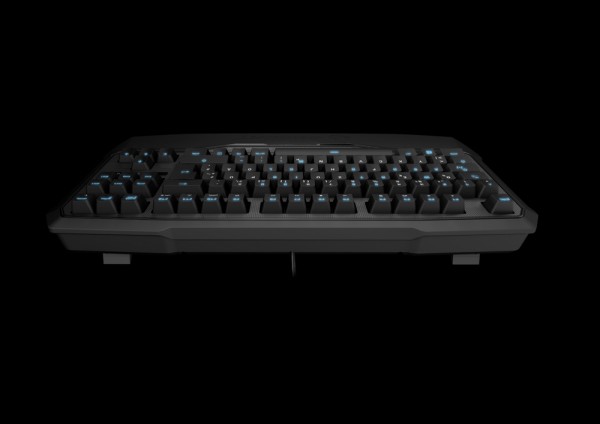 I was initially a little hesitant about using a tenkeyless design, as I am pretty attached to my number pad due to my experience with data entry tasks. I was quite surprised that I did not actually miss the number pad as much as I thought I would. There is definitely a transition period going from a classic keyboard design. For the first few days, I found myself reaching for the arrow keys and suddenly feeling a little lost as I reached to the end of the keyboard, but I quickly adapted.

Since the macro keys on the left side of the keyboard have been nixed, users will have to rely on the main keyboard and the three thumb buttons to bind their macros. The Caps Lock button is by default rebound to Roccat’s signature Easy-Shift[+] button, which will trigger an alternate state for all buttons in the Easy Shift zone. This allows a majority of the keyboard to be turned into a giant macro keypad without interrupting regular typing functionality. Replacing the dreaded Caps Lock key with the Easy-Shift[+] button is a stroke of genius, especially for small handed folk like me. The Easy-Shift[+] function effectively doubles the possible macros available in a small space. When used in conjunction with a Roccat mouse with Roccat Talk functionality, the Easy-Shift[+] button can apply to both devices. 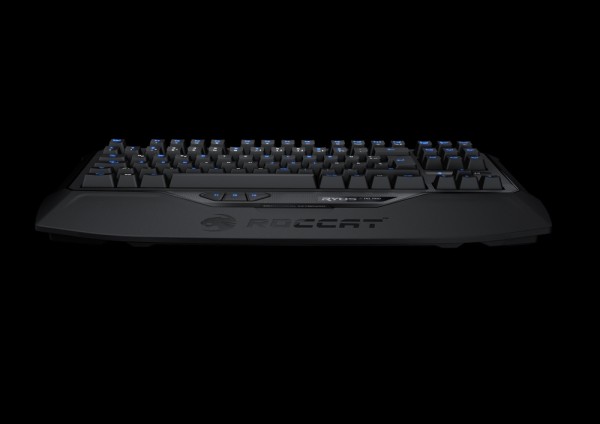 The keyboard is available in four of the most common Cherry MX mechanical switches, so every user is almost guaranteed to find something to their liking. The switches are capped off with laser etched and UV coated keycaps. I like the fact the space bar received the same laser etching as the rest of the key. Unlike many other lit gaming keyboards, a subtle line is cut through the center of the space bar, allowing for the bar to be lit up.

Each key is armed with a blue LED. The light is blindingly bright at maximum brightness and illuminated on a per key basis with the drivers. Due to the locations of the LED on the switch, larger keycaps like the Windows key and the media buttons of the function keys are not evenly lit. 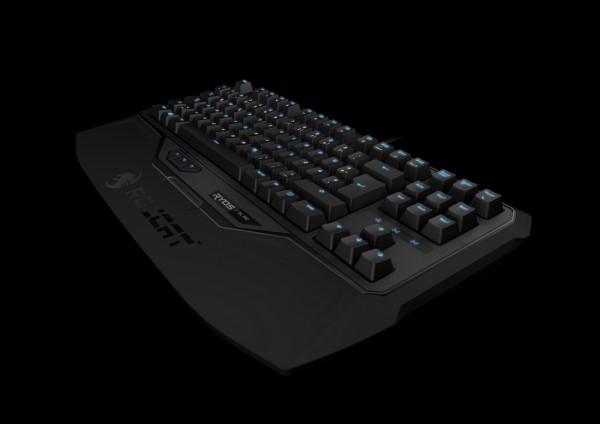 Roccat’s drivers tend to be tightly packed with functionality. The Roccat Ryos TKL Pro’s drivers are no different. Roccat has gone above and beyond by allowing every key to be disabled or remapped. The drivers come with a set of pre-loaded macros for many games, but the listing is starting to show its age. Older games like Command & Conquer 3 and Crysis are due to be replaced with some newer titles. Recording your own macros with the manager is a snap, simply hit the record button and start hitting keys.

The drivers is packed with lighting options. There are two levels of control, but even the simpler automatic setting is still pretty daunting. It took a good twenty minutes of fiddling around before I really got a hang of the LED control schemes. A set of YouTube tutorials would be extremely helpful in cutting down the learning curve with the keyboard. Roccat has provided a bunch of neat visual effects for the LED. My favourite is probably the fade effect that will turn off or on a key momentarily after it has been pressed. The LED’s have a consistent brightness across the board. Unfortunately, the LED brightness cannot be tweaked on a per key basis. It would be great to have WASD keys lit up brighter than the rest of the keyboard for gaming in dark rooms. 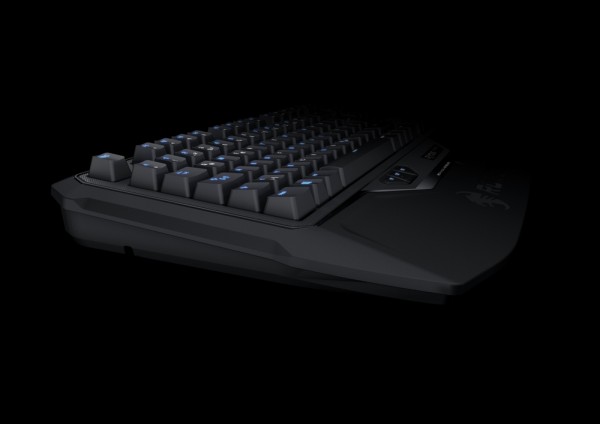 I’m not ready to spend the rest of my life with a tenkeyless keyboard, but if I had to it would be with the Roccat Ryos TKL Pro. The Easy-Shift[+] and the three thumb keys allows the keyboard to punch well above its weight. The per key lighting system is pure eye candy and the huge number of variations means gamers can get their switch preference in their local keyboard format. If you are looking for a great compact gaming keyboard, look no further.