The Roccat Ryos MK FX is packed in a large box that is quite the unboxing. Nestled inside the main packaging is an elegant inner box that is the polar opposite in style to the loud outer box clearly designed to call out to gamers from the computer store shelf. The chest like-box opens up to reveal the Roccat Ryos MK FX, safely bundled in a plastic bag and plenty of plastic film to prevent scratches. The first thing that drew my attention was the incredibly thick braided cable attached to the keyboard. As usual, Roccat has been thoughtful enough to include a Velcro cable tie to help bring order to the chaotic disaster of cables that snake out of the back of most computers. At the end of the beefy cable sprouts two 3.5mm audio cables for the headphone and microphone output on the keyboard and two USB plugs daisy chained together. It would appear the second USB plug is used in the case a single USB port cannot push out enough power to run the keyboard, as my keyboard chugged away happily with only one USB plug connected. 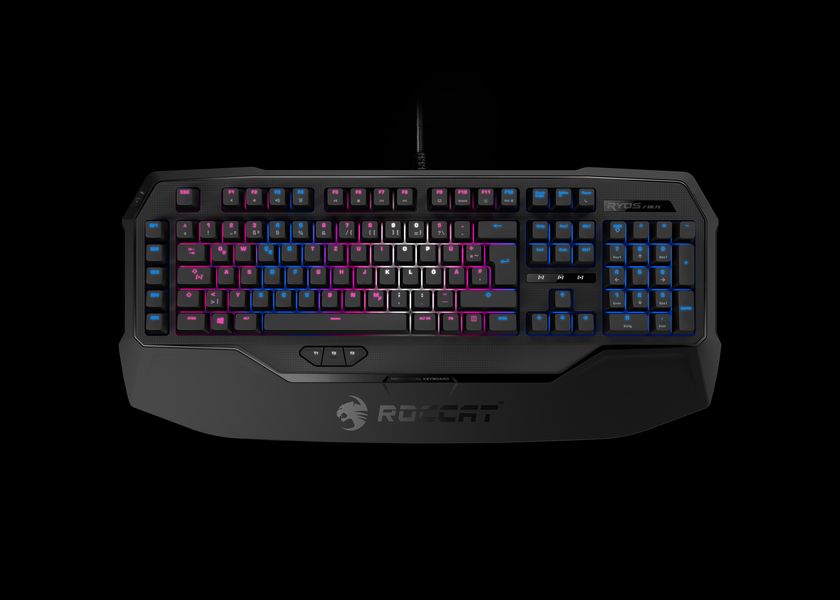 The keyboard itself is very hefty. The body is all plastic, but the keyboard is weighty enough to not move around on a desk when pushed. I am very pleased to find five generously sized rubber feet at the bottom of the keyboard, as I find larger size tends to slip less and stay attached to the keyboard better in the long run. For those who prefer their keyboards at an angle, the two foldable feet are capped with rubber stoppers to ensure stability. On the bottom of the keyboard are several channels for cable management. The channels are large enough to fit an average sized USB cables, but there is nothing to really hold the cables in place when the keyboard is lifted.

The top of the keyboard is a mix of matte plastic, a classy ring of shiny plastic, and a dotted surface to give a little texture to the plastic. Roccat advertises the keyboard as smudge-proof and it lives up to the advertisement quite well. I really can’t commit a crime and expect to get away with it because the combination of oily skin and sweaty hands has a tendency to leave clear as day fingerprints absolutely everywhere. The keyboard does a great job of resisting all but the worst smudges, which is quite the accomplishment. 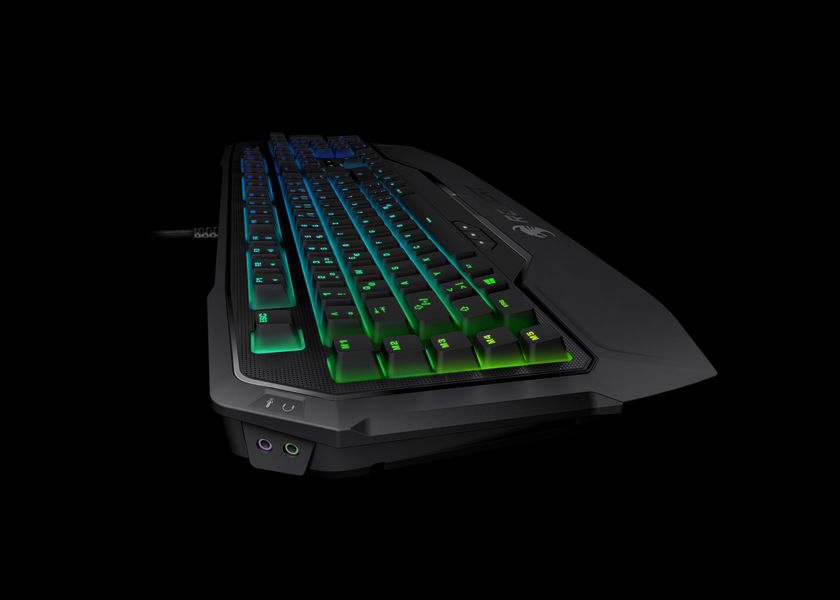 With keyboard manufacturers trying out new mechanical switches or making their own versions of the ever popular Cherry MX switches, it is nice to see Roccat is sticking with the tried and true Cherry MX Browns. Unlike some of the other Ryos keyboards, the Roccat Ryos MK FX only comes in Cherry MX Brown, which is considered to be one of the best switches for gamers. While I personally prefer the lighter touch of Cherry MX Reds, Browns are a good balance as they are quieter than the chattery Blue switches and require enough pressure to prevent accidental key presses, while still being soft enough to allow for quick double taps.  One of the bonuses of using such a popular switch is the wide variety of aftermarket keycaps available for Cherry MX switches.

The keyboard uses per-key RGB LEDs. The LEDs are very bright and can be clearly seen in well lit rooms. My only complaint is that the colour transition is not the smoothest thing in the world. Using the right lighting effect can hide the sudden jumps when the LED changes colours, but when the keyboard is set to stay lit and simply cycle through colours the transitions are really obvious. 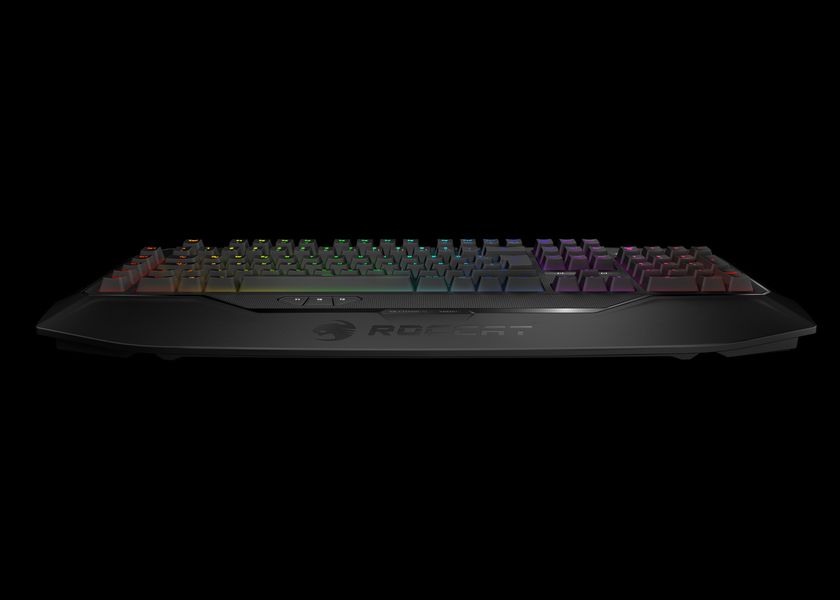 Roccat makes one of my favourite keyboard layouts. They start with a classic keyboard layout, then add a row of five macro keys to the left side of the keyboard and three more mouse-like buttons just below the space bar. My utmost favourite part is the fact Roccat has drop-kicked the caps lock key by default in favour for their Easy-Shift[+] functionality that essentially doubles all of the possible key combinations on the keyboard. Of course, if you absolutely love to cruise control while shouting on the internet, the caps lock functionality can be reassigned using the keyboard software. 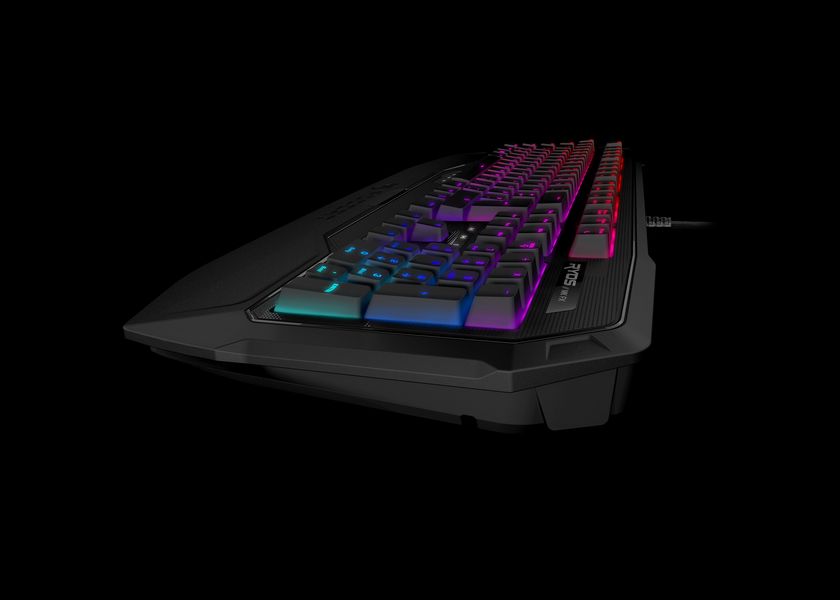 Roccat is slowly transitioning their software to the unified Roccat Swarm software suite. I have complained in the past about my dislike for the old system that required installation of separate software for different Roccat peripherals. Roccat Swarm is a step in the right direction. The suite is intended to manage all of Roccat’s peripherals, while providing extra functionality through a mobile app. Currently, the base software is only available on Windows and the only mobile platform currently supported is Android.  It is clear that the suite is still in development. The Windows software is stable for the most part, but I did encounter the odd crash. The macro manager is very powerful, giving users a lot more control versus the built in macro record function on the keyboard.  On the flip side, I find the controls to be a little awkward. I don’t like the fact pressing enter immediately creates a new macro and delete removes the current delay, as it seems counter-intuitive when editing delay times. I am very happy to see a lot of pre-loaded macros for a large variety of titles, though the list is starting to look a little dated. The software is loaded with a variety of lighting effects. As a bonus, it provides power users with a lot of granular options and can support Alienware’s AlienFX API out of the box. 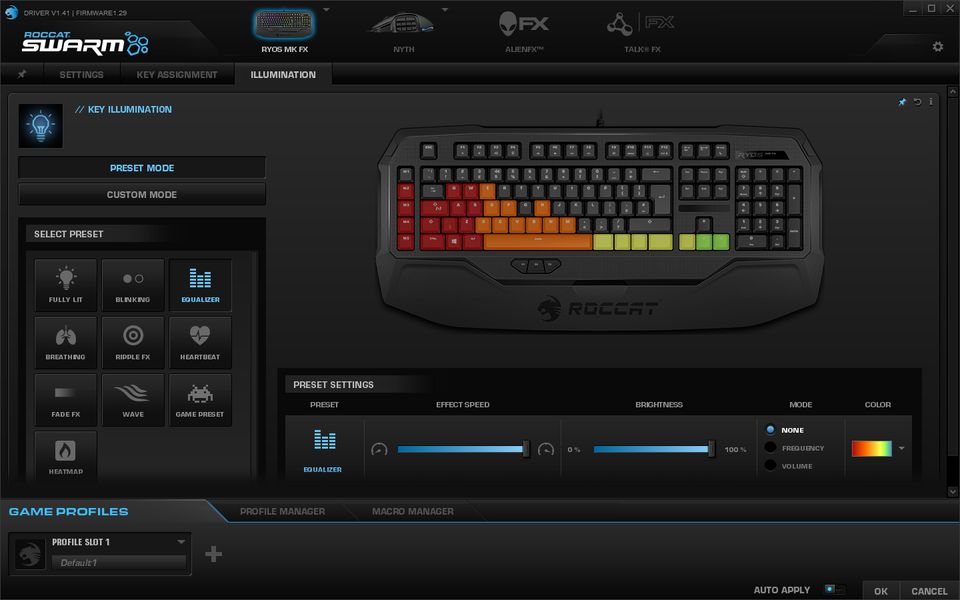 The mobile functionality is clearly in the earliest of stages. The Android app doesn’t actually support the keyboard at this time, as it is still branded for the Roccat Nyth mouse. Even more disappointing is the fact the Android app is still separate from Roccat’s Power-Grid application. Roccat has a good start and some excellent ideas with the new Swarm software, but they really need to hide the mobile software until development is complete, integrate Power-Grid software into Swarm, and do some final polish. If they can pull this off, they will definitely have one of most well rounded and feature rich software suites on the market. 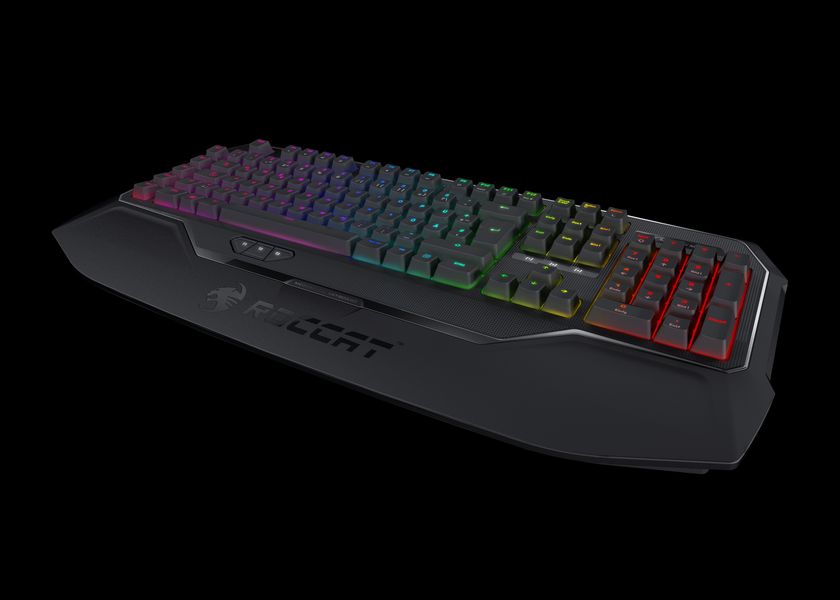 To me, the Roccat Ryos MK FX is an interesting case. On the surface, it seems like a minor incremental upgrade from the Roccat Ryos MK Pro that adds RGB lighting and removes the USB 2.0 hub. It is the type of minor incremental upgrade that usually draws a cooler response versus the hype of a brand new product launch. Not a bad thing, considering Roccat is building on top of a fantastic keyboard design that is easily recommended to anyone in the market for a gaming keyboard. At the same time, the Roccat Ryos MK FX comes right as Roccat is completely revamping their software from the ground up with Roccat Swarm, something that deserves a lot of interest. The computer side of Swarm is already a solid product that needs a little bit of final polish; however, the mobile half of the software is not even ready, let alone ready for prime time as advertised. With hope, Roccat will finish up development over the next few months, integrate the Power-Grid software into Swarm, and put in some final polish to power the very solid Roccat Ryos MK FX keyboard with one of the most well rounded software suites out there for a gaming peripheral.