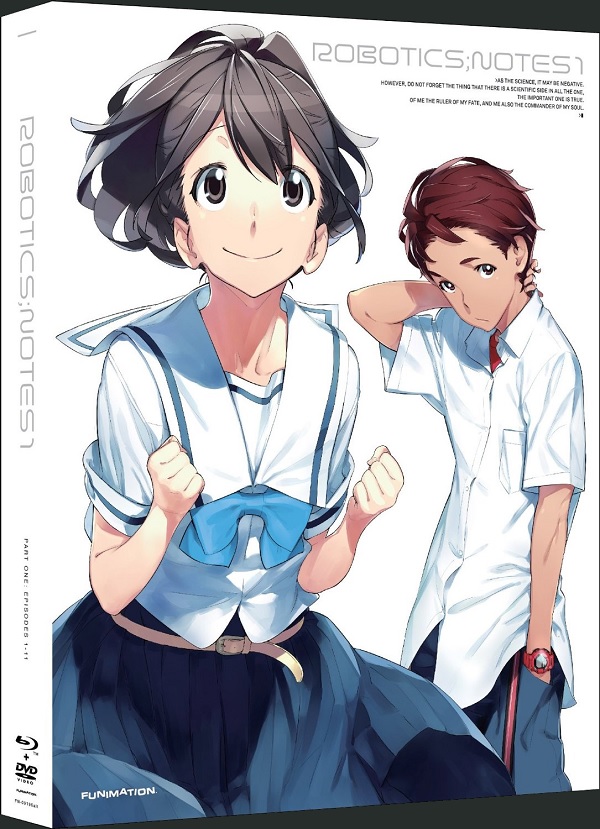 Overview
Over the last few years a few anime adaptations of visual novels by 5pb. have been released to various levels of success. While Chaos;Head was lacking in a number of areas Steins;Gate managed to excel in nearly every way. Now while many of the people working on the anime are different than the ones who worked on the other two series, a third anime called Robotics;Notes has been released in North America. With some fans already going into the series with some expectations, does Robotics;Notes Part One manage to stand on its own?

Story
The setting in Robotics;Notes takes place a few years in the future during the year 2019. In this world people have been able to enjoy a number of technological improvements that deal with robotics and tablets with virtual reality programming and enhanced capabilities. The main male lead Kaito loves to play a fighting game on his tablet named Kill-Ballad and devotes a lot of his time to this game, but he still happens to be a member of his school’s Robot Research Club.

The only problem is, he is only one of two members and the other member is his childhood friend Akiho who is always very energetic and excited to keep the club running with her dream being to complete a giant robot that her elder sister started when she founded the club years prior. The only issue is, since robot building isn’t cheap and the club only has two members, they are on the brink of being shut down and only through participating in a mini-robot tournament do the two have any hope of keeping the dream, and the club, alive. 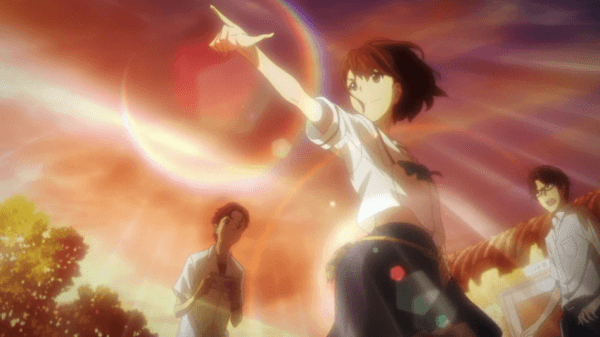 After rebuilding a mini-robot to enter the tournament the club begins to grow in number as a few new members are brought into the group to help with the construction of this large robot. This introduces a number of new immediately likable characters that help expand the already enjoyable cast to a nice solid number that, at least on surface level, revolves around building a giant robot based on an old extremely popular anime series from their childhood.

However there are two sides to the story in Robotics;Notes and while the light-hearted nature of building a robot and tackling the various challenges that includes, as well as some family drama, takes center focus most of the time, there are a number of dark developments that are slowly revealed to viewers over the course of Part One.

Not only do Kaito and Akiho suffer from a strange illness, where Kaito can slow time down and have inhuman reflexes and Akiho suffers from moments where time accelerates at a fast rate, but these incidents seem to only be the beginning of many sinister revelations. Kaito then finds himself learning more about an unbelievable secret that sees him working with an AI named Airi that slowly begins to reveal a global conspiracy that could destroy the world as they know it. 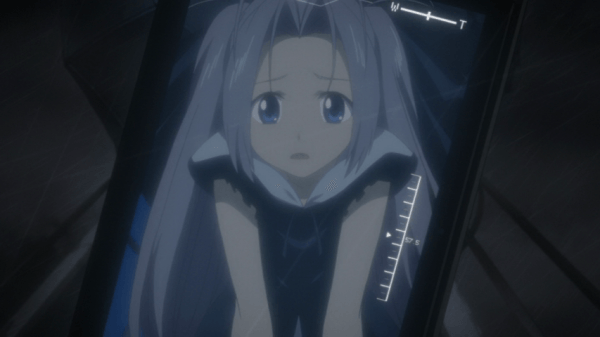 Robotics;Notes intertwines these two storylines in an intelligent way where the darker revelations are first introduced as simple conspiracy theories or ridiculous but as the series continues on viewers will get the chills when they see that a few of these theories begin to pan out as viewers learn more about the characters, such as Frau, a girl whose mother worked on the famous anime and knows some truth to why the final episode never actually aired despite being an incredible hit, and various developments in the world itself.

While Part One leaves everything still hanging, Robotics;Notes has set itself up with a number of intriguing plot hooks that viewers will find hard to ignore and make them want to see what will happen next, especially after a major revelation in the final episode in this set.

Visuals
With the release of Robotics;Notes we have yet another studio handling the series’ animation compared to the other titles viewers will relate the series to. Thankfully Production I.G. has handled the series quite well with a number some basic but nice looking character designs and amazingly detailed looking background scenery. 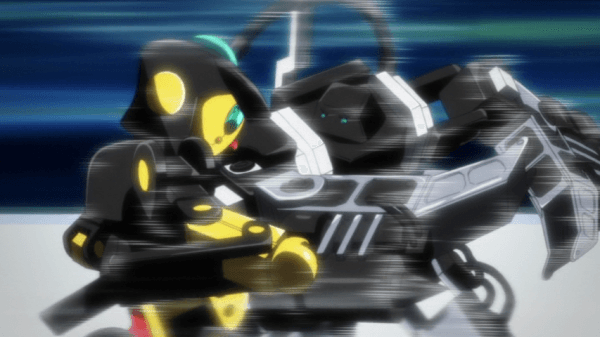 It is also nice to note that there are quite a few special effects that play into the series at times and the way the robots are handled are interesting to see. It is worth noting that FUNimation has included full sign translation for the various pieces of Japanese text that appear on tablets which is nice, though it is a bit odd that the sign translation often reads different than what the voice actors actually say.

Audio
With FUNimation’s release of Robotics;Notes Part One the company has provided the series with an English dub as well as the original Japanese voice work for viewers to choose their preference. The English voice actors are fairly standard and unfortunately only one character’s voice work, Frau, actually stands out and it is probably simply because of how eccentric she is and her use of internet slang in standard conversations. 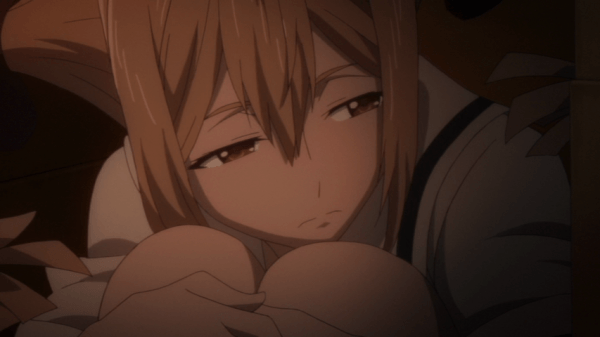 As for the series’ background music, most of the music found in this first part is fairly forgettable which is a shame, though the opening theme “Junjo Supekutora” by Zwei and the ending theme “Umikaze no Brave” by Fumika are both enjoyable and worth listening to at least a few times.

Extras
The on-disc bonus features for Robotics;Notes Part One are mostly what one would expect from a FUNimation release, with a clean opening theme, clean ending theme, US trailer for the series, other trailers for FUNimation anime, and two commentary tracks. However there is also the inclusion of a video interview which is always a welcome addition. 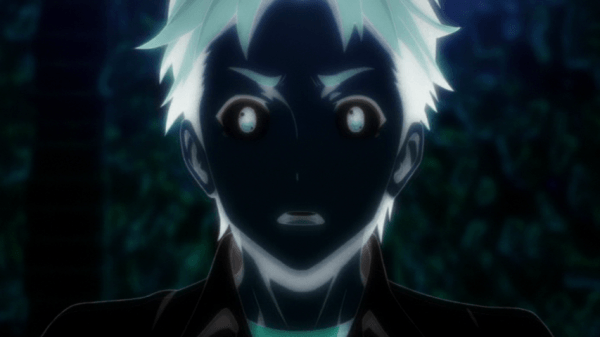 The first commentary is for episode 6 and features Leah Clark, the voice of Frau, and Monica Rial who voices Juuna while the second commentary is for episode 10 and features Lindsay Seidel, the voice of Akiho, and Jarrod Greene, the voice of Subaru. As for the video interview it is called “Science Adventure Series Interview Part 1” and it is a nearly twenty minute long interview with Joel McDonald, J. Michael Tatum, and John Burgmeier. All of these men worked on either Chaos;Head, Steins;Gate, or Robotics;Notes and they discuss a few of the connections between the three series.

Overall
Robotics;Notes Part One feels like a lighter version of what fans have the 5pb. game adaptations have seen so far. It is far better than Chaos;Head but at the moment feels less complex and intriguing as Steins;Gate and is also limited by the basic English dub cast. That being said, this lightness is refreshing and with a likable cast of characters to keep things interesting during the slice-of-life like sequences with the robot creation and the slow reveal of evil machinations in the works, viewers will be finding themselves eager to see how things will develop in the second half of the series.