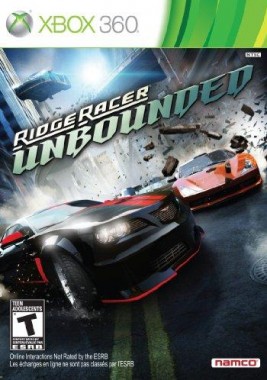 Overview
Much like Madden, we as the gaming public have grew to expect a new Ridge Racer title nearly every year, for just about every platform. While quantity with the franchise has always been a definite factor in keeping the speed alive, many could argue that quality has been sub-par at best with the past few releases, and Namco seem to be ready to change all of that with Ridge Racer: Unbounded. Think of the classic experience you’d expect, add the bang of a Michael Bay film, and a pinch of arcade racing charm and you have Unbounded, which is definitely a good thing for an aging IP. Are explosions and a few new tricks enough though to get this series back on track? Here is my review for Ridge Racer: Unbounded. 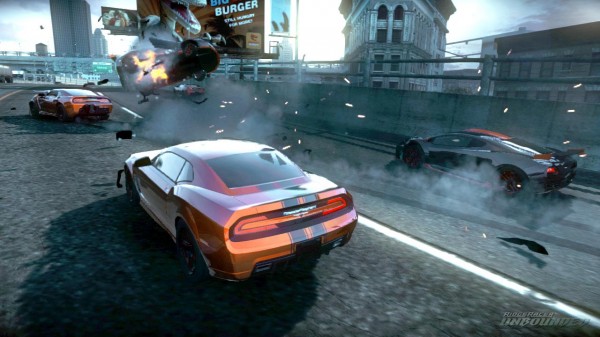 Gameplay
Those accustomed to the classic feel of a Ridge Racer game will quickly learn that Unbounded has steered far off route, as this entry has been created by Bugbear Entertainment, the brains behind the highly explosive FlatOut franchise. Taking place in Shatter Bay, players must take the role of an illegal street racer, shedding through the streets against several competitors. These roads aren’t all smooth sailing though, as shops, signs, and all of the urban fauna are ready to block your path, and luckily are almost everything is fully destructible. It’s a familiar concept, but Unbounded goes for gold with it’s big-boom gimmickry, working wonders to keep the experience feeling fresh throughout the nine districts in the main mode.

Controls couldn’t be simpler, as all you have to do to take off is simply hold down the right trigger to accelerate and use the analog to steer your way through the map. Due to the fact that almost any other opponent can destroy you at any given time, braking is also very important, but thankfully this task is performed without a sweat as bringing your ride to a full stop is as simple as giving the left trigger a tap. The prime feature of these cars though comes in the drifting, which can be done by holding down the B button while making a quick turn. This mechanic did take some getting used to, but it’s a mandatory practice that one will have to use to simply survive. 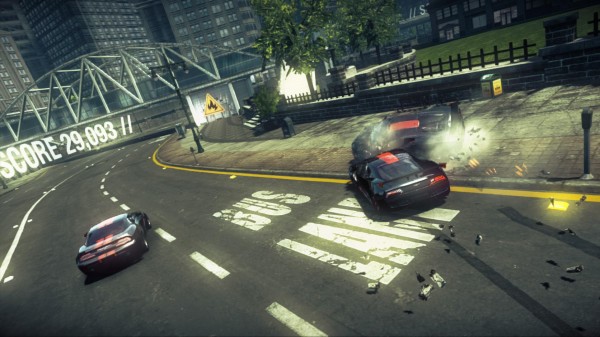 Drifting deserves a lot more mention for a number of reasons, however. A power gauge can be filled by pulling off drifts, which then allows players to execute a nitro-charged boost to gain some ground. This tactic proves useful in Demolition races, which require the player to destroy everything in their path to make it to the finish by boosting through enemies and literally “fragging” the competition. It doesn’t end with your enemies, either, as there are several large obstacles such as coffee houses and diesels that can be plowed through if you have enough power earned when approached. Yes, it’s quite the exciting feat to see this in action, but for some reason the developers thought it would be wise to turn these action sequences into a cutscene, which results in the madness being ripped out of your own hands as you are forced to watch the same canned sequence each time you pull of the stunt. It’s a bit disappointing to say the least, but even more frustrating considering that you have to gain back control after the scene plays out, which can easily lead to a collision.

Thankfully, there is a good amount of variety in Shatter Bay, as there are plenty of non-demolition styled races that players can partake in. From the likes of time trials, all out drifting wars and of course the straight-forward Shindo races, these extra inclusions act as a nice vacation from the intense main match-ups, and feel a lot more traditional as the main goal is simply to speed to the finish as quick as possible. Unbounded’s environments keep the core concept in tact though, and even though you may be cruising for a different purpose, you are sure to see plenty of destruction along the way. To keep you coming back and going in for more, experience points can be earned for simply placing in the top three of a race, which can then be used to unlock more districts, vehicles, and pieces of environment for the track editor (which we will get to in a moment). 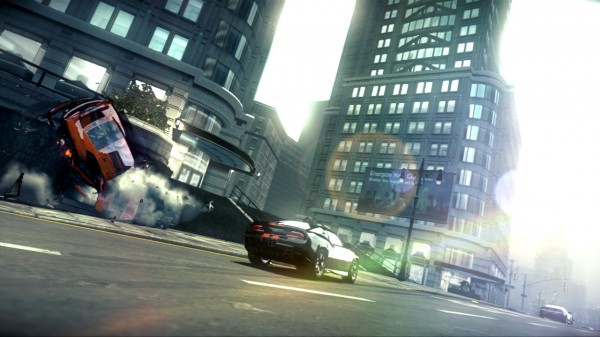 As exciting as the races can be, I still have a few complaints with how everything plays out as a whole. The AI is actually brilliant, as they are fueled to win whatever type of match you may be competing in. The problem with this lies in the challenge though, which is sure provide a stiff learning curve to newcomers. For demolition matches, the game places you at 11th out of 12 racers. This means that it’s your job to fight through ruthless AI to get into first. Just when you think you’re safely tearing through ranks, a frag can come from another racer pulling off a boost that can set you back a good six places. As I mentioned earlier, the canned sequences can also be harmful, as I had several occasions where a cutscene would finish up just as a foe from behind rammed my car with a boost. Now, I do enjoy a challenge and a good part of Unbounded’s charm is the unforgiving AI, but due to how easy it is to crash, a lot of victories within the game come down to trial, error, and a bit of luck. 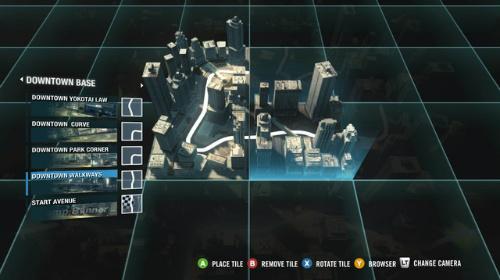 Track editing allows players to create their own city to race in by placing runnels, turns, loops, and ramps all over the road to make a distinct track. Once you have a good bit of pieces unlocked for it, this editor is quite unique to the genre and also very broad. Making a track is done with a grid-based scheme, so placement is super-easy, and players are even allowed to test out their creations as they build in order to perfect their urban masterpiece. I designed a track with nothing but loops to test this out at first, but it didn’t play out too well. That’s the fun of this mode though, as there is nothing but freedom and you can design just about any type of track you could possibly want. An online mode stacks onto this editor to near perfection as well, letting players create a city for others to race in, where the challenge comes in beating the top score. Online mode also offers daily challenges to earn XP as well as the standard fare of racing, which can lead to an almost infinite amount of hours soaked into the game.

Visuals/Audio
I know many racing fans hold the recently released Forza 4 or Gran Turismo as the benchmark for visuals for the genre, but Ridge Racer: Unbounded’s graphical stylings in my opinion surpass what those games offered as they are simply more unique. Think of Blur, a bit of Split Second, and the fine vehicle detail of the earlier mentioned titles and you really have what gives this title it’s appeal. The shading is simply superb and makes these cities come alive, with the sun usually casting it’s light through buildings, making environments appear highly realistic but still original. The animations of the destruction are also done in a AAA manner, with concrete walls crumbling as you skid past and glass shattering from windows at the lightest touch. The cars also can take massive damage, and this shows as you take hits from opponents, making your ride appear as if it’s been through hell as you cross the finish line. 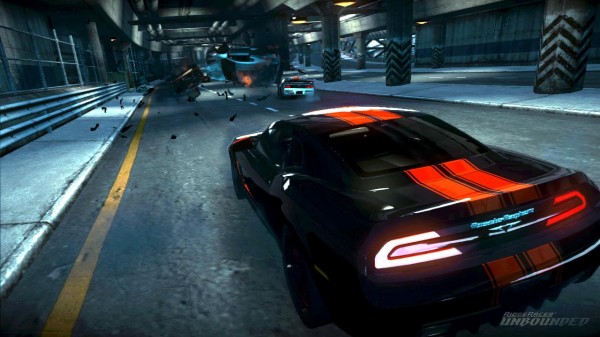 As far as a soundtrack goes, think dubstep. These beats bode well for the thrills and even if you’re not a fan, they can easily be muted so you can treat yourself to the sounds of the highway. Those familiar with Skrillex and The Crystal Method are going to love the in-game music, and I personally have discovered a few lesser known artists that are actually quite good on their own just by playing through Shatter Bay’s districts. Unbounded also creates an intense atmosphere with the environmental sounds, as hearing the effect of a oncoming opponent boosting behind you is sure to keep you on edge as you propel through each area, with revving engines always pushing the player to go faster. Explosions also sound great, and assist even further in bringing the “blow everything up” concept full circle.

Overall
Ridge Racer: Unbounded is by no means the perfect racer, nor is it the most original. It is however a fantastic addition to the genre as it offers a simplistic yet unique form of challenge through it’s vehicular-combat driven races, which are just as fun to watch as they are to play. Having a track editor included with online play intertwined was also a brilliant move, as it’s sure to give all budding street-racers plenty of reason to keep coming back for more. Ridge Racer as a franchise doesn’t get a lot of respect due to the many missteps of past entries, and yes, you have every right to be cautious going into Unbounded. Fret not with this one though, as this is the return to glory for the namesake, and one of the most enjoyable thrill-rides to hit the genre since Burnout.